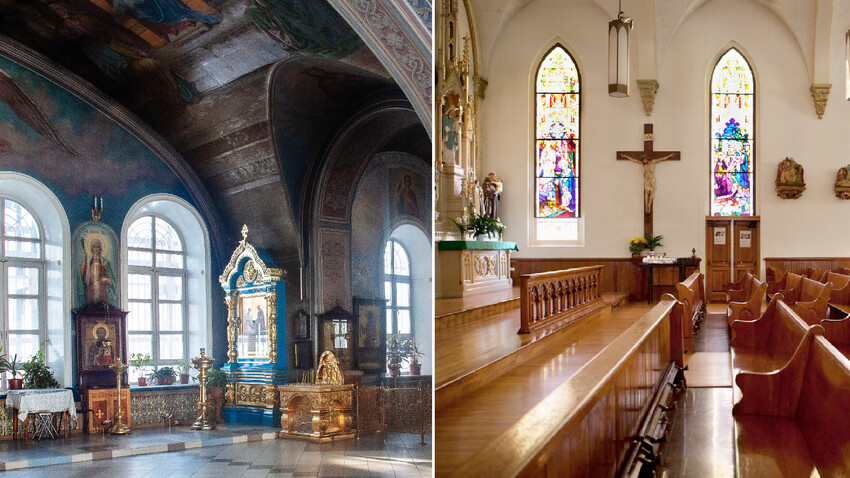 Ekaterina Rehrberg/ Sputnik; Monashee Frantz / Getty Images
The Great Schism in the year 1054 divided Christians into Orthodox and Catholic churches and the division still exists after almost a thousand years. Russians observe Russian Orthodox rites. Here are the main differences of these rites from Catholic ones.

“What immediately catches the eye when entering most Orthodox churches is the abundance of gilded ornaments, holy relics, icons, frescoes,” says Erwann, a Frenchman living in Russia. But it’s not only the rich decorations that help tell Orthodox churches from Catholic ones. “Then, the absence of benches is immediately noticed, which in Catholic churches occupy most of the space. In Russian churches, they are usually located only along the wall near the exit door,” Erwann says.

It’s interesting that the benches in Catholic churches have to do with some peculiarities of the Catholic church service – in Orthodox religious service, on the contrary, benches would have been inconvenient. Below we explain this difference – and more obvious differences between Catholicism and Orthodox Christianity.

Currently, there are about 1.34 billion baptized Catholics worldwide (according to the statistics provided by the Holy See) and about 220 million baptized members of the Eastern Orthodox Church (according to BBC). In the latter, Russian Orthodox Church is the largest autocephalous (self-governed) church, which comprises over 112 million members worldwide, thus being second only to the Roman Catholic Church, in terms of numbers of followers. In 2021, the Russian Public Opinion Research Center (VCIOM) estimated that 66% of Russians were Orthodox Christians.

1. The Head of the Church 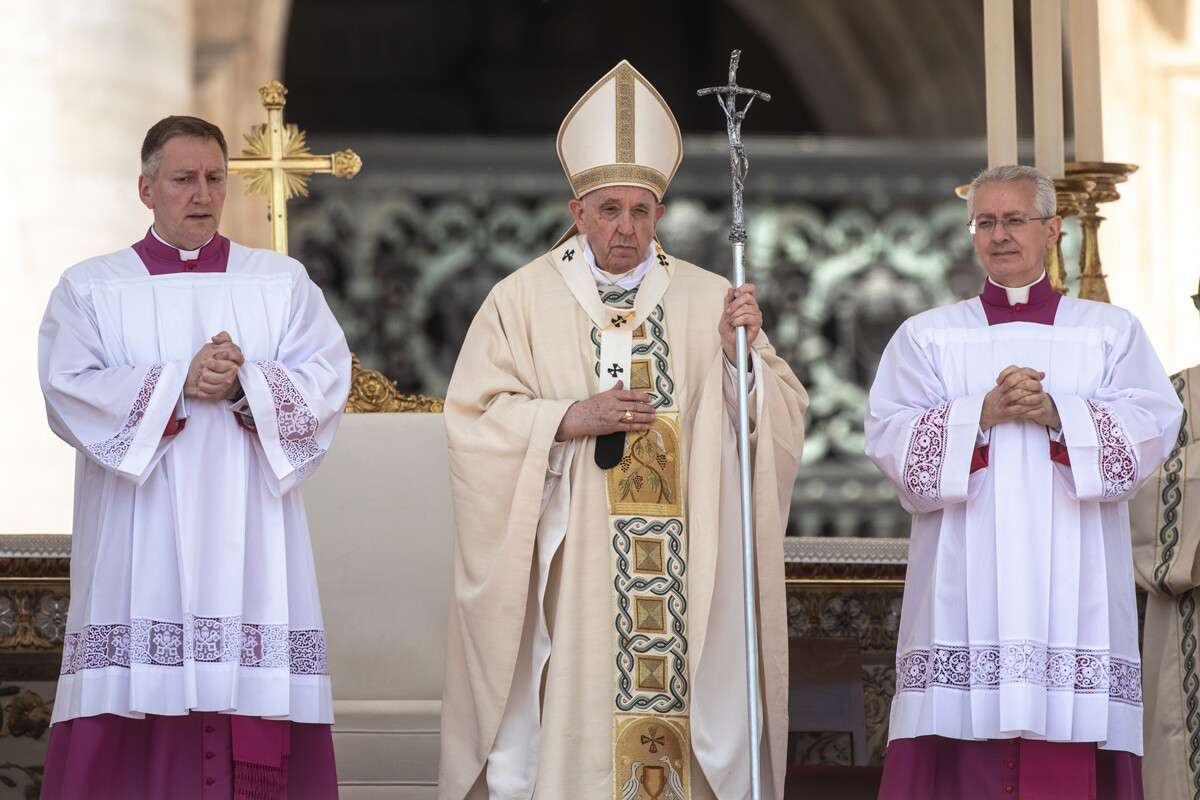 Orthodox Christians consider Jesus Christ to be the head of the church, while the Roman Catholic Church is headed by the Pope, who uses the title of the ‘Vicar of Christ’. This is based on the fact that Apostle Peter received full and absolute authority over the entire Church from Jesus Christ. Then, Peter came to Rome and became the first bishop of Rome, afterwards transferring this power to his successors and disciples – the bishops of Rome. This status of the Pope is embodied in the concepts of Papal primacy (over all other bishops and their episcopal sees) and Papal infallibility. The Orthodox church, on the contrary, considers all bishops and archbishops merely mortals who are vocated and ordained to perform religious services.

2. Celibate for the priests 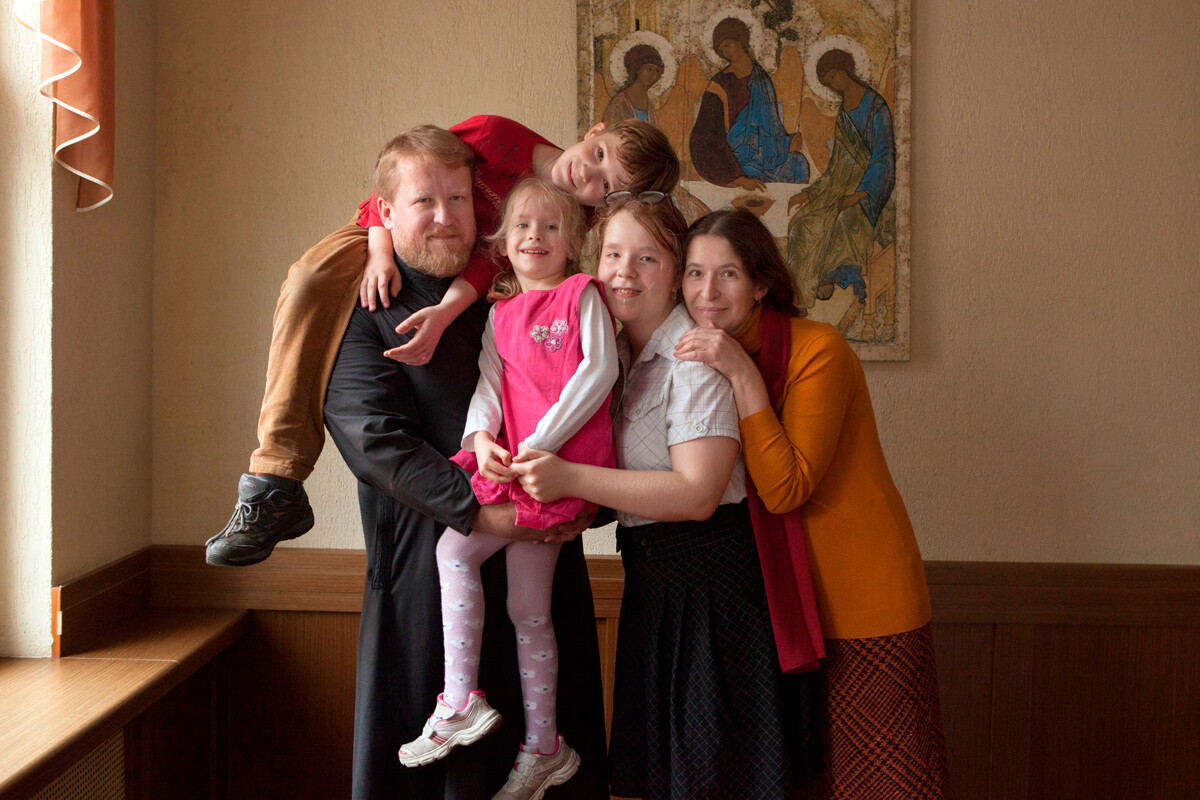 However, if their wives predecease them, Orthodox deacons and priests are not allowed to remarry. Also in the Orthodox Church, bishops must be monks and they, however, must observe celibate before and after their ordination. 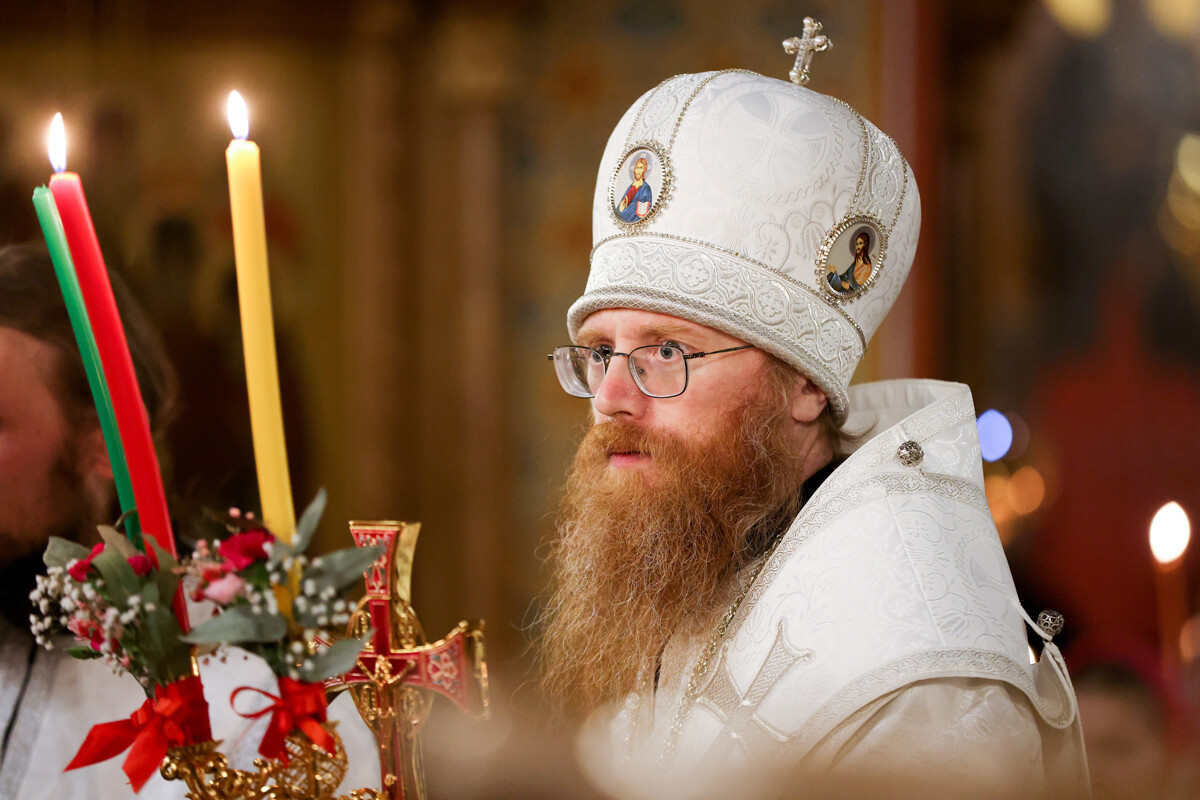 Father Iosif, Bishop of Mozhaysk, during an Easter service

Traditionally, Orthodox priests wear beards, because “Priests must not shave their heads or shave off the edges of their beards or cut their bodies”, according to Leviticus, 21:5. Also, Jesus Christ is pictured everywhere as having long hair and beard and all Biblical kings and prophets wore beards. However, Catholic priests don’t wear beards, because the papal seat is located in Rome with its clean-shaven culture. 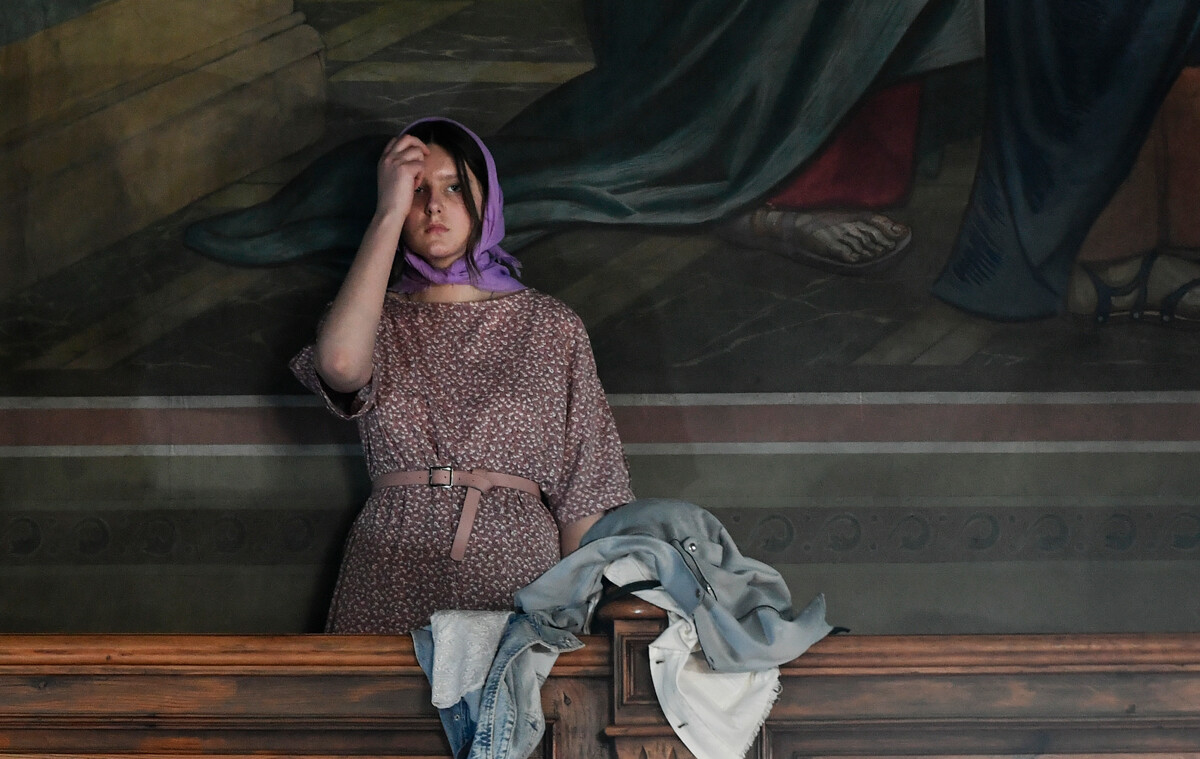 A girl during an Easter service

In 1570, Pope Pius V defined that Catholic believers must perform the sign of the cross “from head to chest and from the left shoulder to the right”. Also, the sign is performed with all five fingers of the right hand put together – that symbolizes the five stigmata of Jesus Christ: two on the hands, two on the feet and the fifth from the Holy Lance. 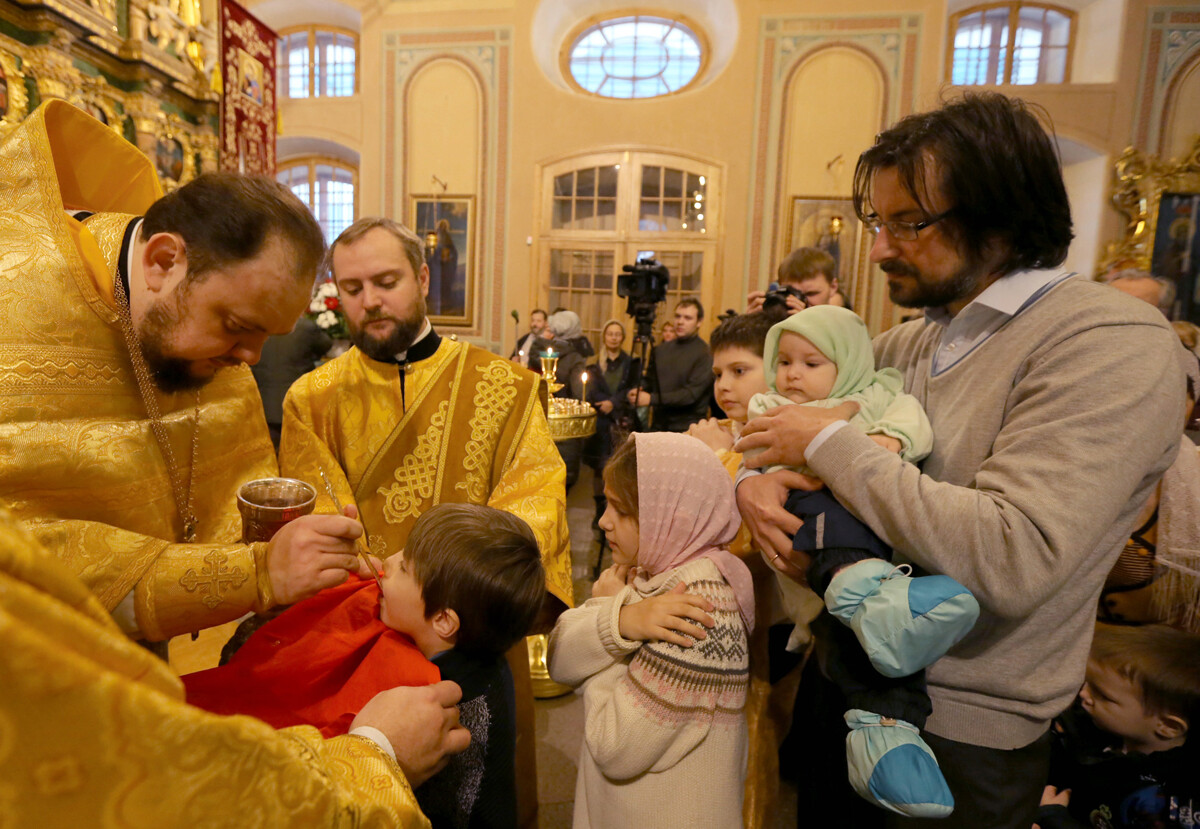 The rite of the Holy Communion after a liturgy in a temple in St. Petersburg

In Orthodox tradition, Holy Communion is given to infants from the moment of baptism. This is based on Matthew 19:14: “Jesus said, ‘Let the little children come to me, and do not hinder them, for the kingdom of heaven belongs to such as these’.” From infancy and about the age of seven, they can receive communion as often as they like and without confession, because it is believed that up until a certain age, infants don’t bear full responsibility for their thoughts and actions, but still must receive Communion. Children are brought to confession in Orthodox churches after 7-8 years of age.

In the Roman Catholic Church, the first Holy Communion of a child is usually performed at 8-9 years of age. Catholics believe that the child is not able to realize the significance of the Sacrament earlier, can’t distinguish simple bread from Eucharistic bread, can’t understand and explain the difference between food and Communion and, therefore, cannot fully confess. 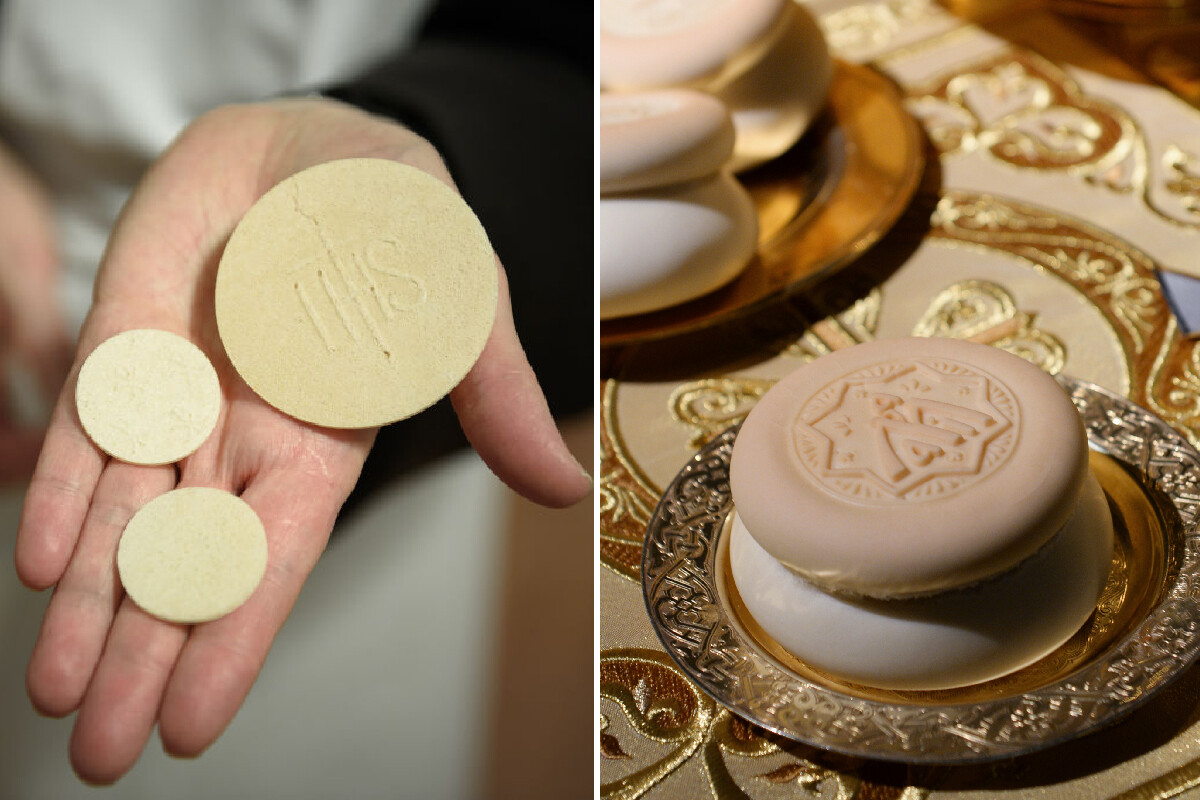 In Roman Catholicism, the so-called ‘azymes’, unleavened bread, is used as the Eucharistic bread in Holy Communion. Exodus, 12-15:20 states: “Eat nothing made with yeast. Wherever you live, you must eat unleavened bread.”

In the Russian Orthodox Church, bread made with yeast is offered during the Divine Liturgy (Eucharist), which is based on Leviticus 7:13: “Along with their fellowship offering of thanksgiving they are to present an offering with thick loaves of bread made with yeast.” The Greek word for this bread, prosphoron, means ‘offering’. 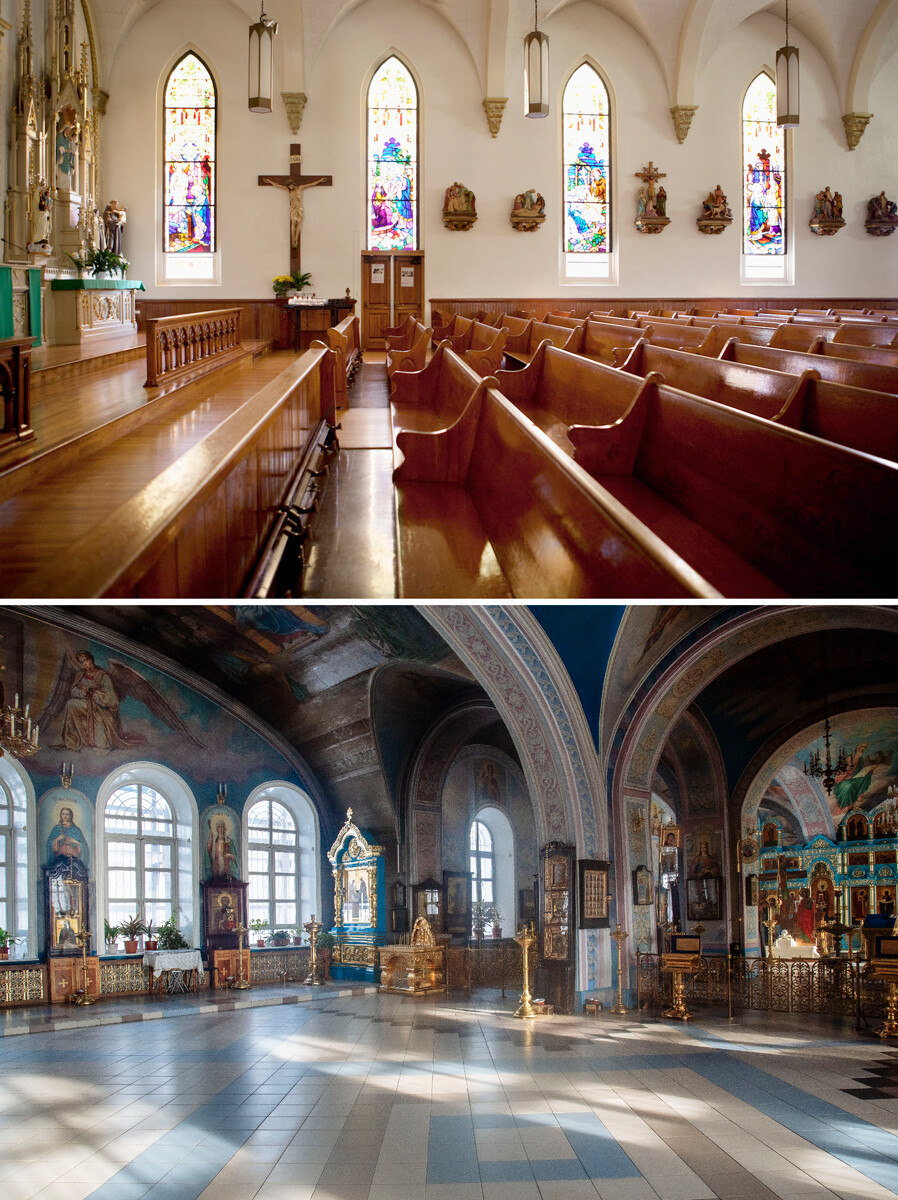 You can tell at once whether you’re in a Catholic or an Orthodox church just by the benches. In the Catholic tradition, prolonged kneeling is a usual part of the prayer, while in the Orthodox tradition, bows to the ground are frequently made during service. Because of that, benches with shelves for kneeling appear in Catholic temples, while in the Orthodox churches, the central space is left vacant so that the parish can make bows when it’s necessary.