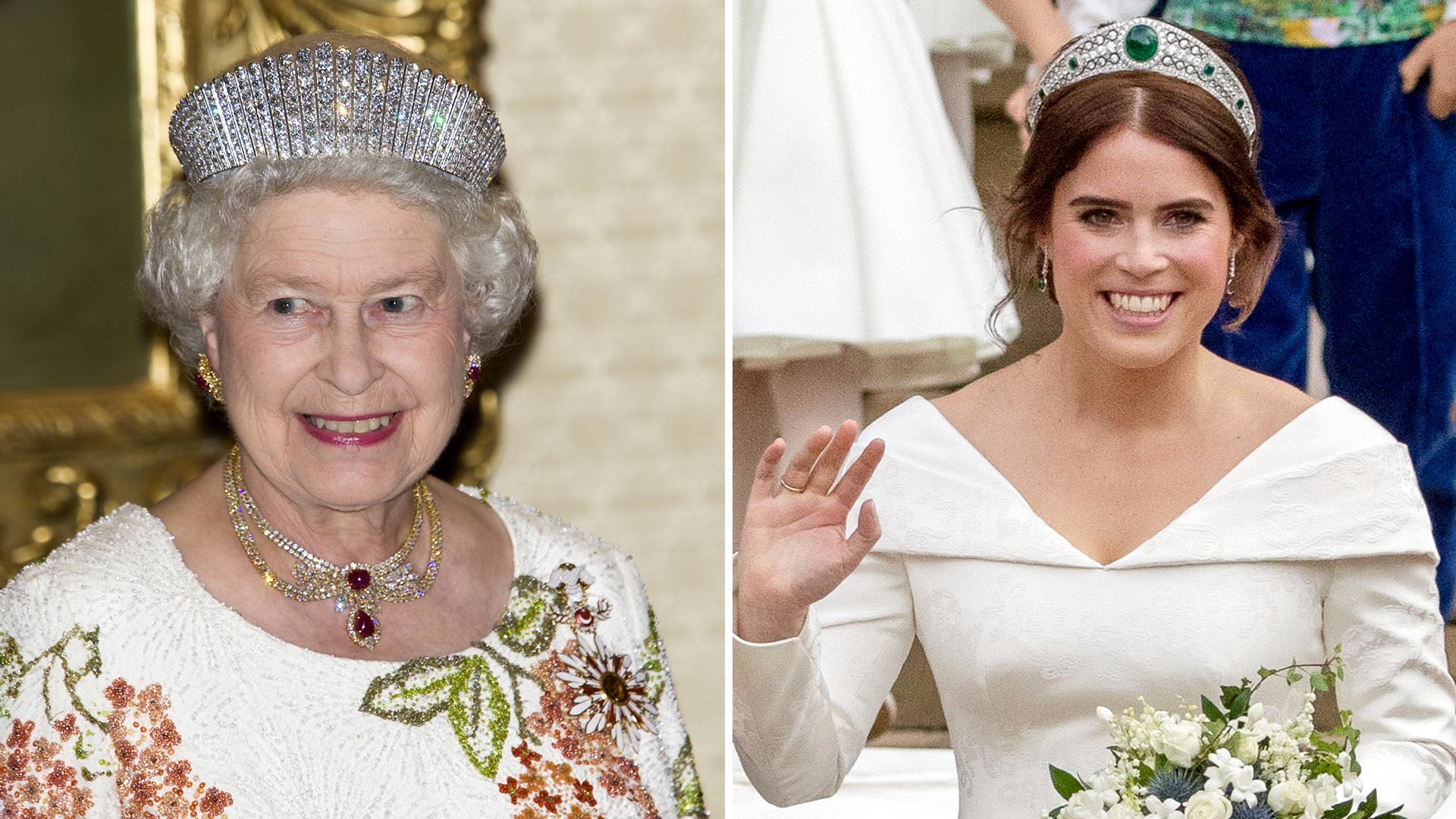 Queen'S State Visit To Turkey in 2008 and the wedding of Princess Eugenie and Jack Brooksbank in 2018.

Getty Images; Reuters
These sparkling diamond and emerald tiaras are modeled and named after the old Russian headdress.

At official functions, European royalty can often be seen wearing tiaras that resemble an old Russian headdress called the kokoshnik. In Russia, empresses and grand duchesses wore this kind of tiara beginning from Catherine the Great’s rule during the second half of the 18th century. Outside of Russia, the fashion for the tiare russe developed thanks to Queen Alexandra, the wife of King Edward VII and sister of the Russian Empress Maria Feodorovna, wife of Alexander III. Some of those tiaras still include the word “kokoshnik” in their official names, although they never actually belonged to any members of the Russian royal family (click here to find out more about what happened to the Romanovs' tiaras after the 1917 Revolution).

One famous piece of jewelry belonging to Queen Elizabeth II is the diamond Kokoshnik Tiara, with its unique sun rays made of white and yellow gold. It was this ornament that inspired the “Russian style” trend in jewelry outside of Russia.

Queen Alexandra and Mary of Teck in Russian Kokoshnik.

The tiara has a fascinating origin story. In 1888, when Queen Alexandra and King Edward VII were celebrating their silver wedding anniversary, ladies-in-waiting wanted to present her with a particularly remarkable gift. Alexandra asked them for an exact copy of the diamond tiara worn by her sister in Russia. The ladies donated their diamonds and ordered the tiara from the Garrard & Co. jewelry house. Like most Russian tiaras, it could be worn as a necklace as well—this type of ornament is called a fringe tiara. Alexandra was delighted with the gift and often wore it at official functions, calling it her Russian Kokoshnik. 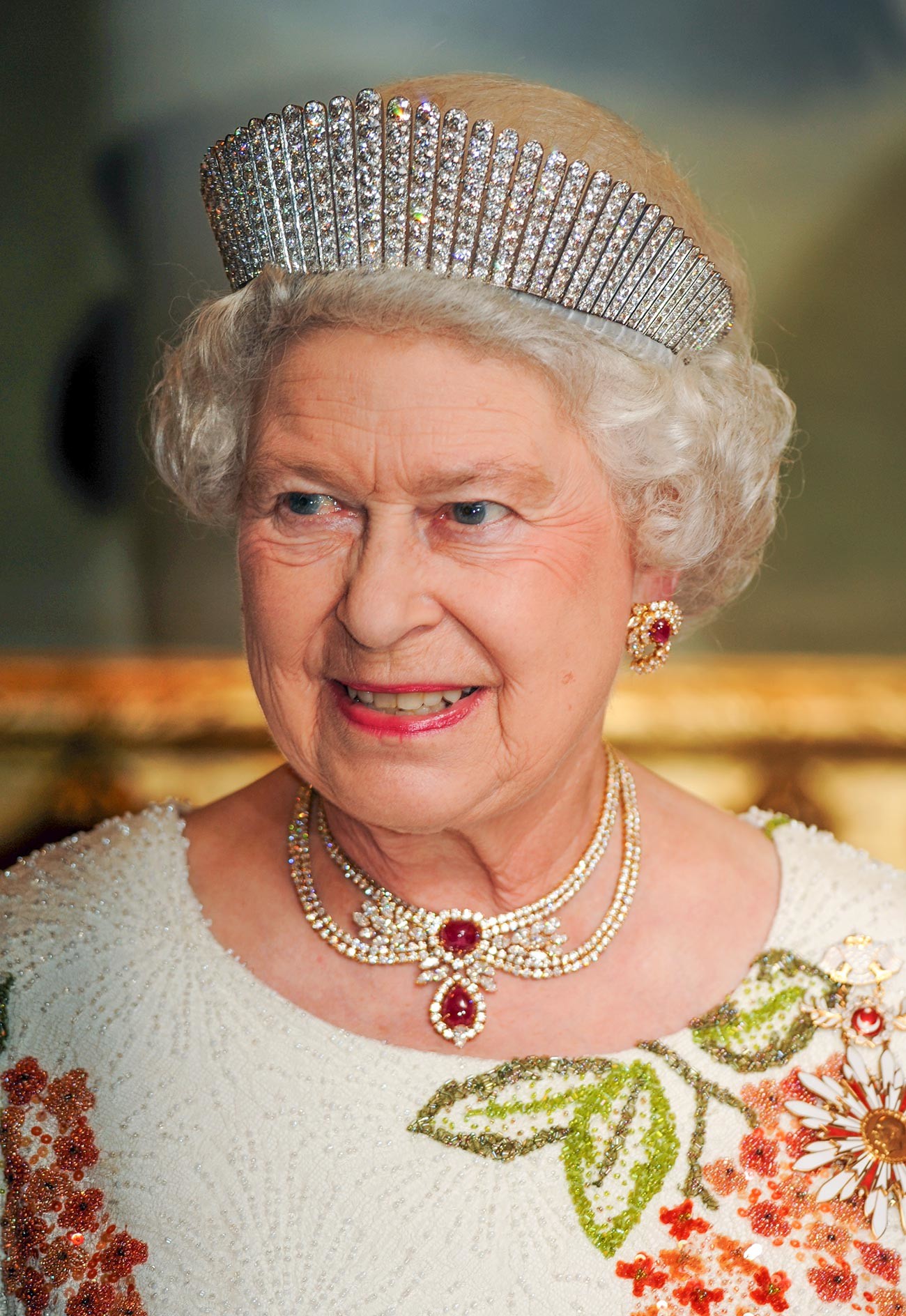 Queen Elizabeth ll attends a State Banquet on the first day of a State Visit to Turkey on May 13, 2008 in Ankara.

The tiara was passed down from one British queen to the next, and today it is owned by Elizabeth II. Like her mother, grandmother and great grandmother, the Queen has often worn it during public appearances throughout her reign. 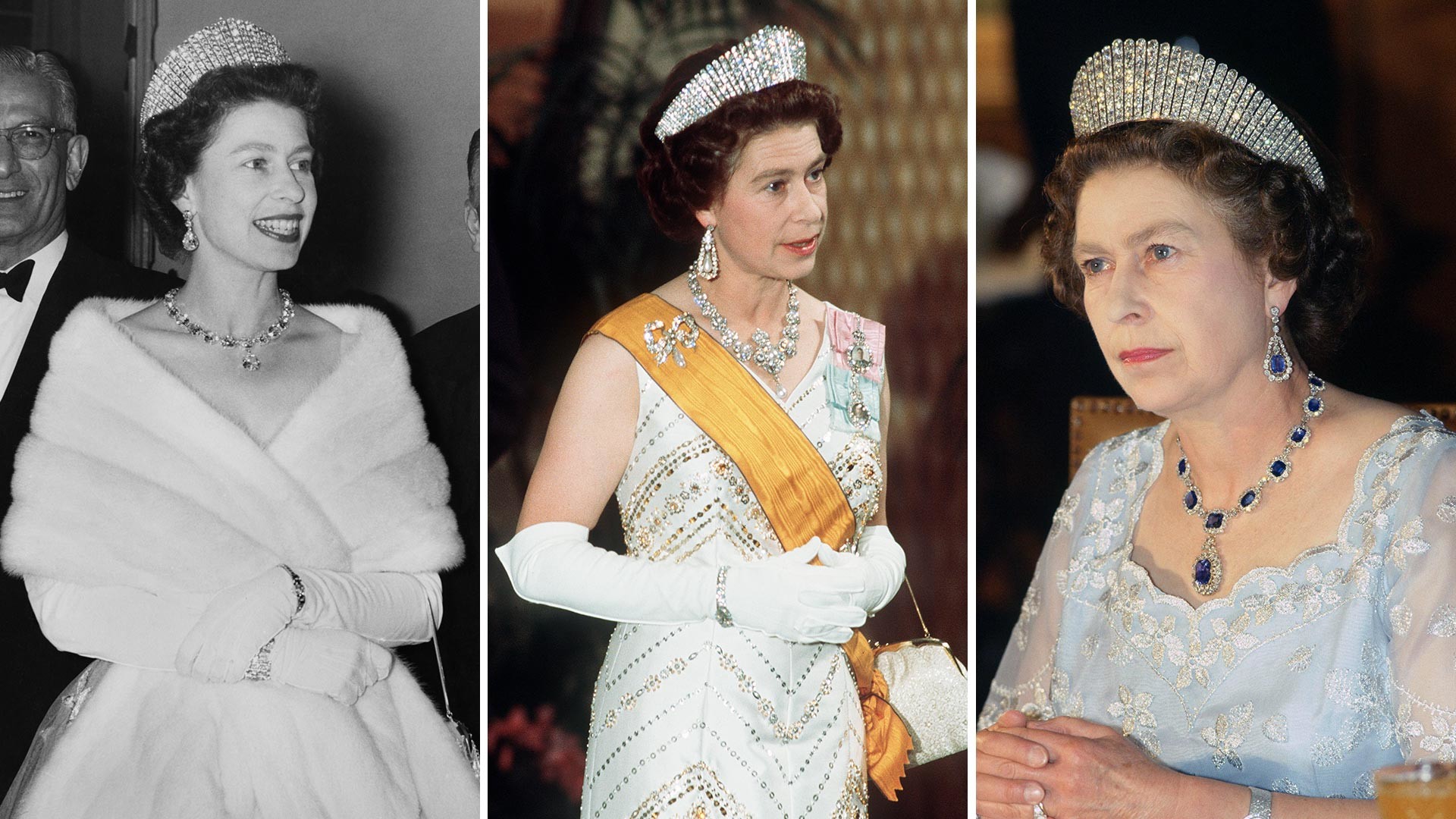 Incidentally, Elizabeth II has another 19th century fringe tiara in her collection. She wore this one at her wedding in 1947 and recently lent it to her granddaughter Beatrice for her wedding in 2020. 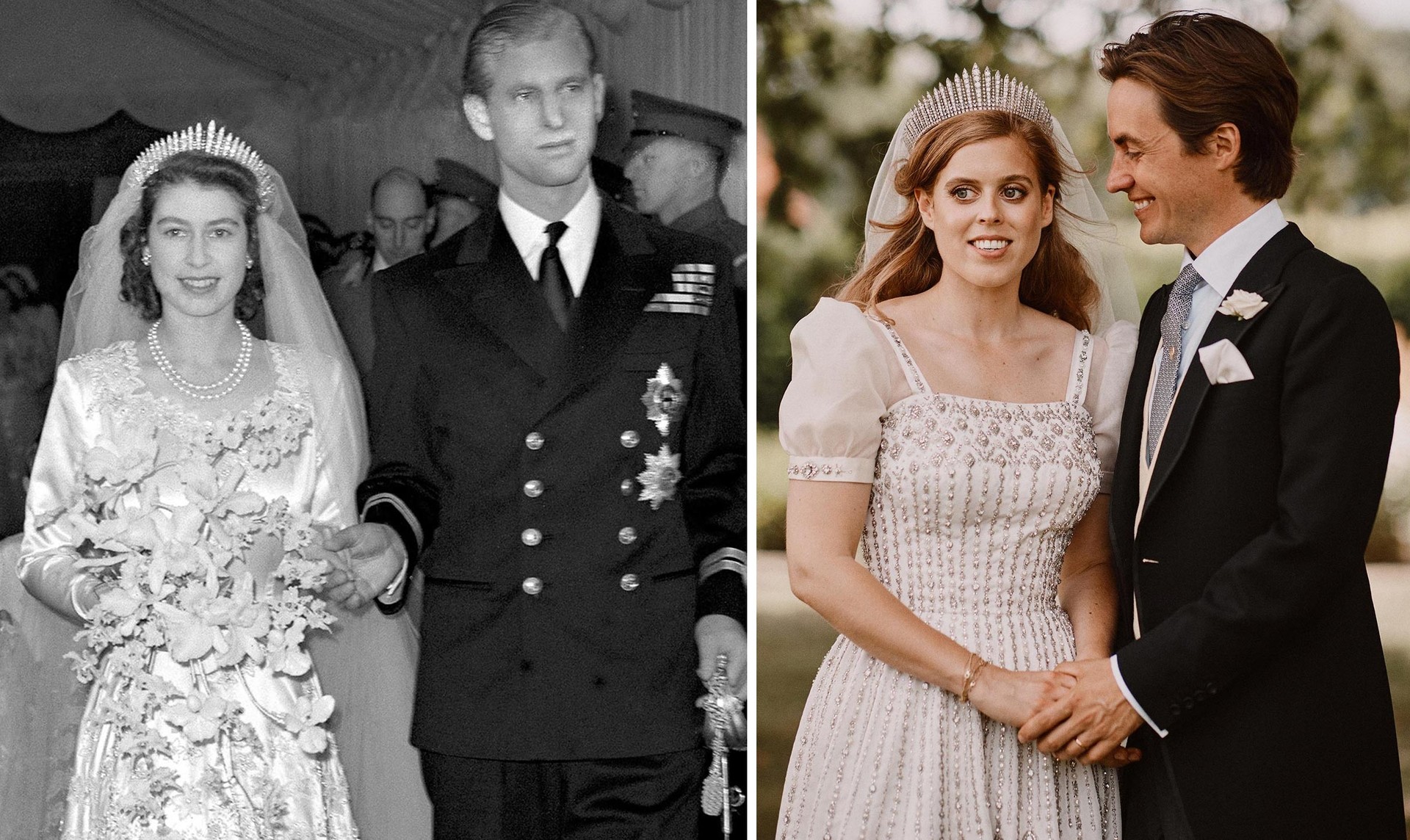 Although from a distance it looks like a kokoshnik tiara, it actually has a different shape and more modest design. 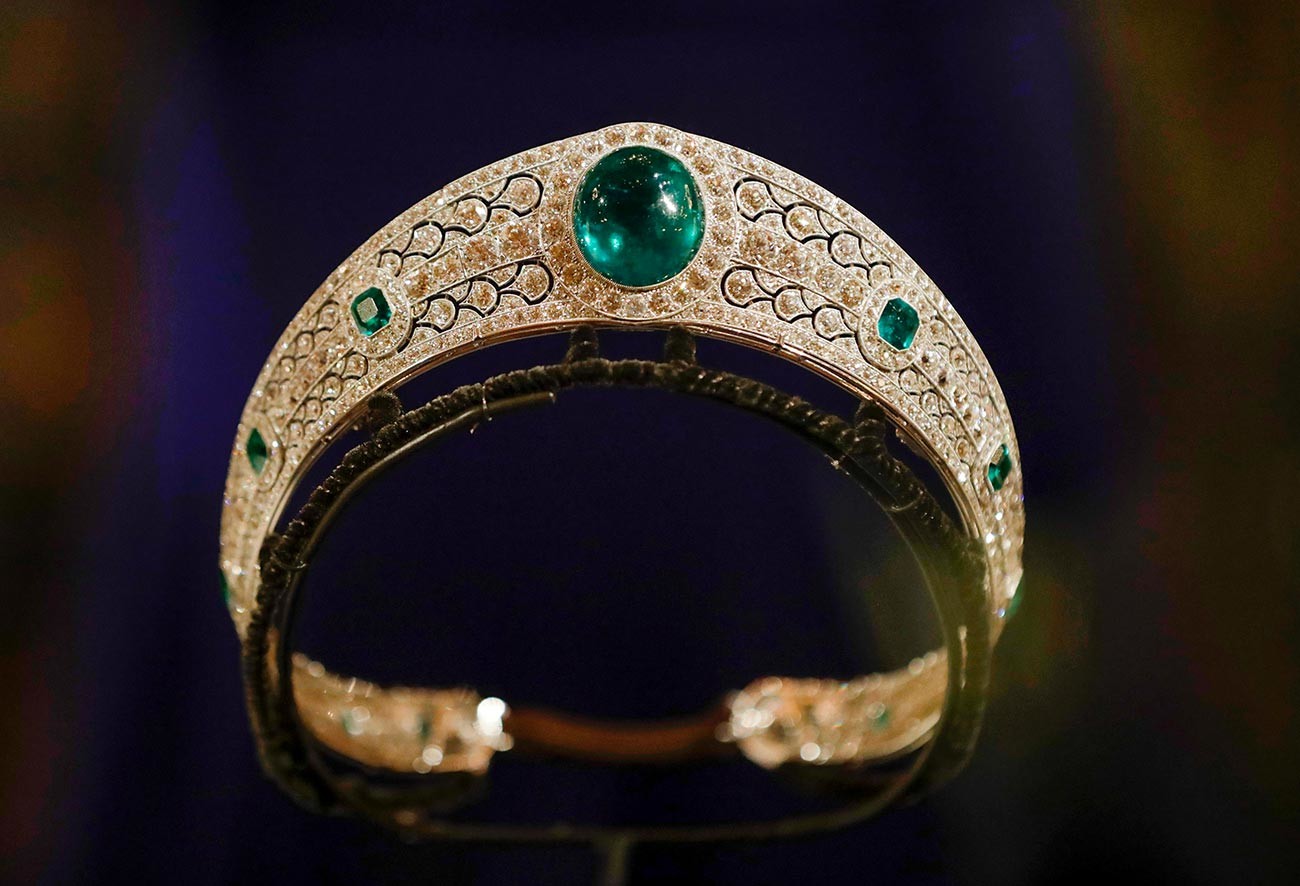 Another granddaughter of Elizabeth II, Princess Eugenie, wore a kokoshnik tiara to her wedding in 2018 as well. That tiara, made of platinum with white and pink diamonds and huge emeralds, was created in 1919 by the French jeweler Boucheron for Margaret Greville, the daughter of a member of parliament named William McEwan. 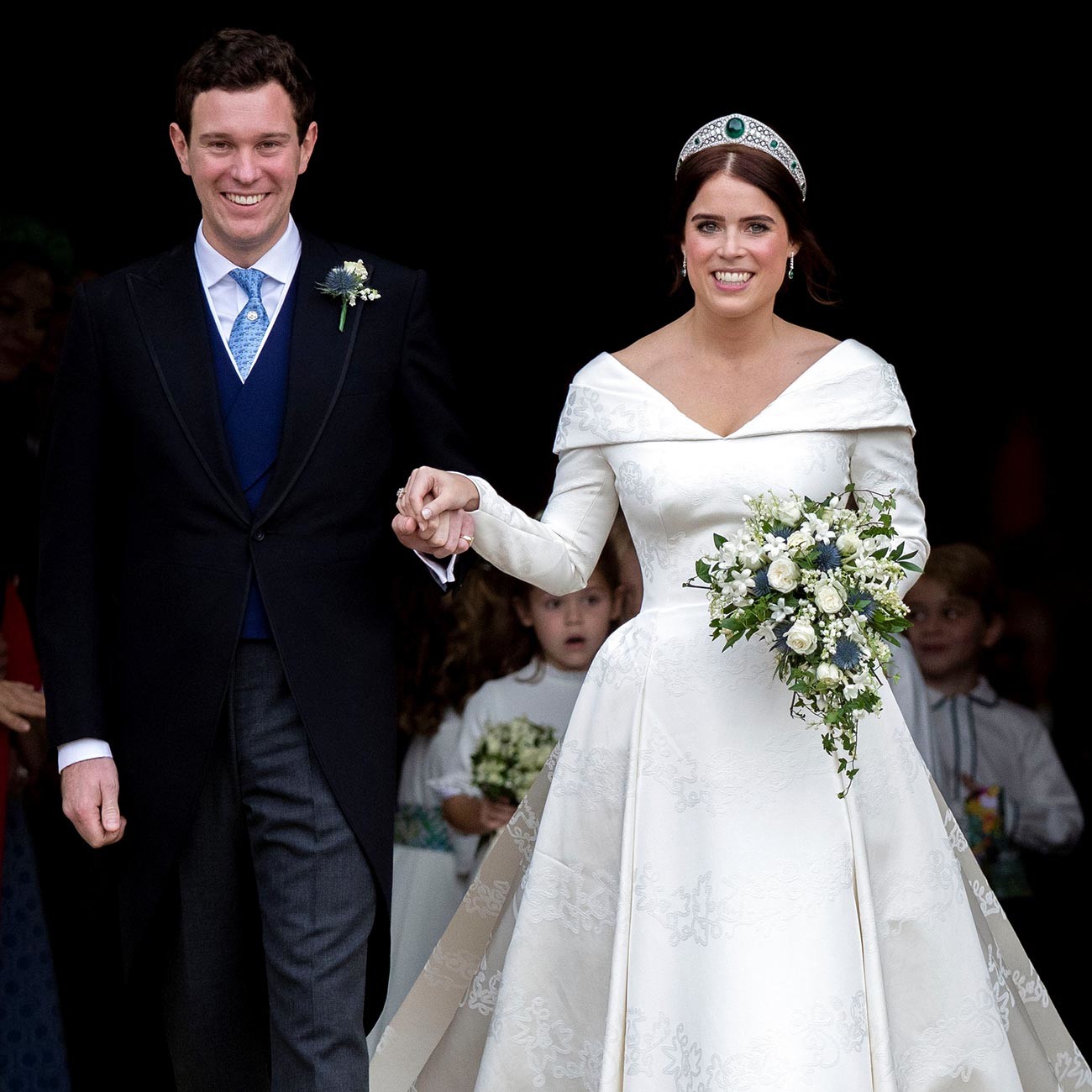 She bequeathed the tiara to the royal family in 1942 along with her other jewelry, and now the tiara belongs to Elizabeth II.

One of the most fabulous kokoshnik tiaras belongs to the King of Sweden’s sister, Princess Margaretha. It was first worn in the 1900s by Margaret of Connaught, the wife of the future King Gustaf VI Adolf of Sweden. It is known that she had brought the tiara from Great Britain—where she came from—but there is no information about the jeweler who made it. 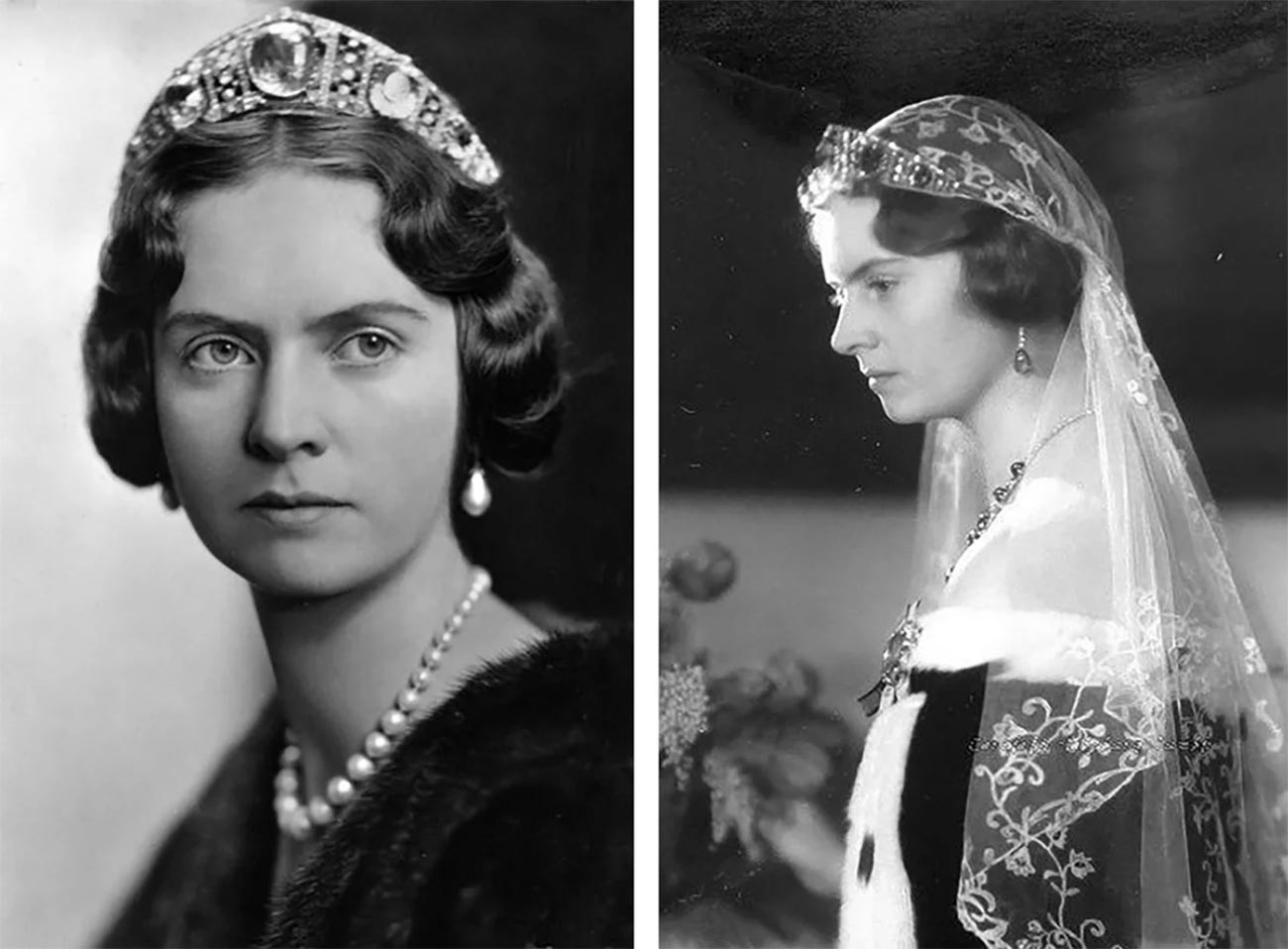 Princess Sibylla of Saxe-Coburg and Gotha.

The tiara was passed down to her daughter-in-law, Princess Sibylla of Saxe-Coburg and Gotha. 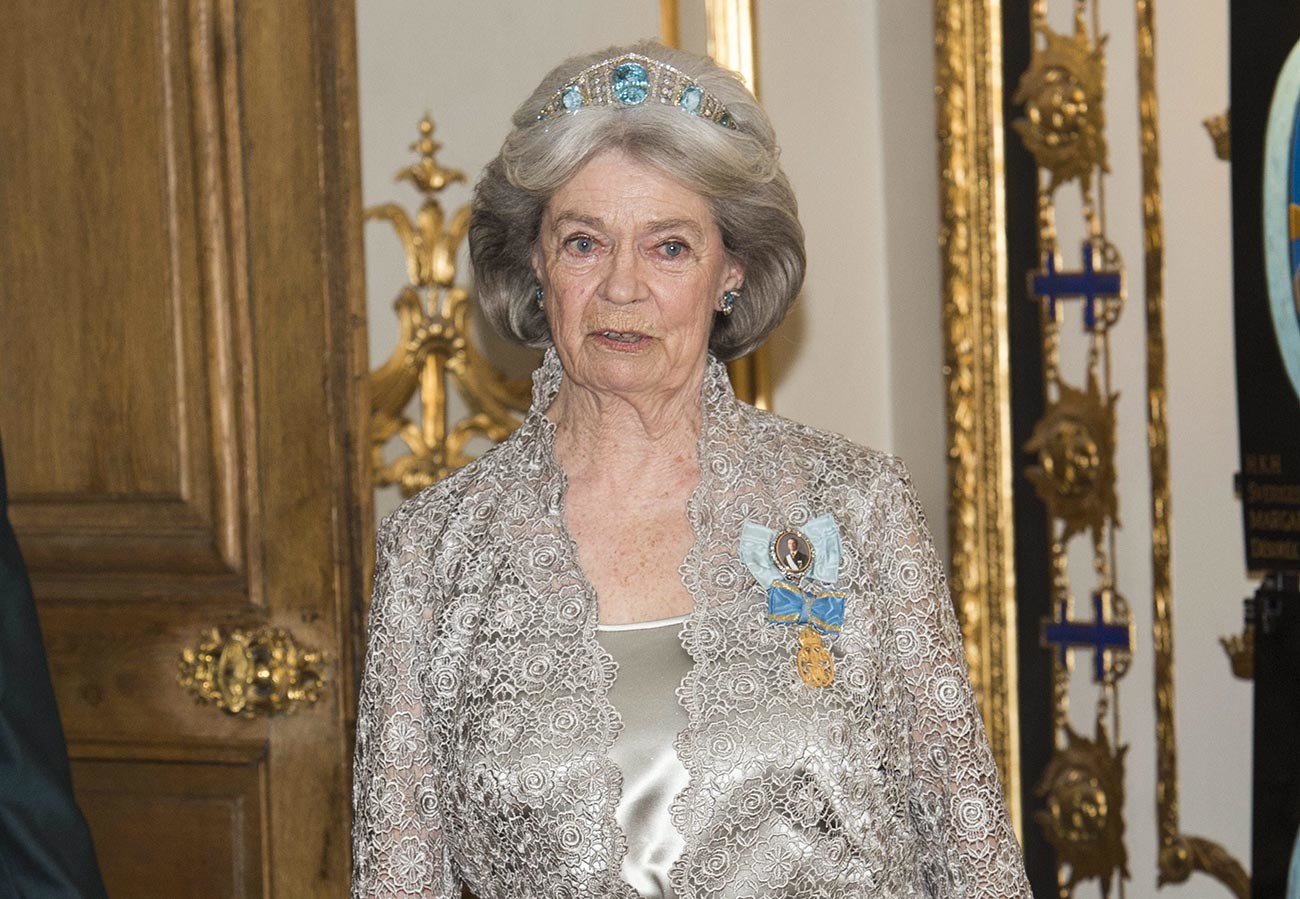 At present, it belongs to her daughter, Princess Margaretha, who occasionally wears it to various social events, as do her nieces, Princess Christina and Princess Madeleine. 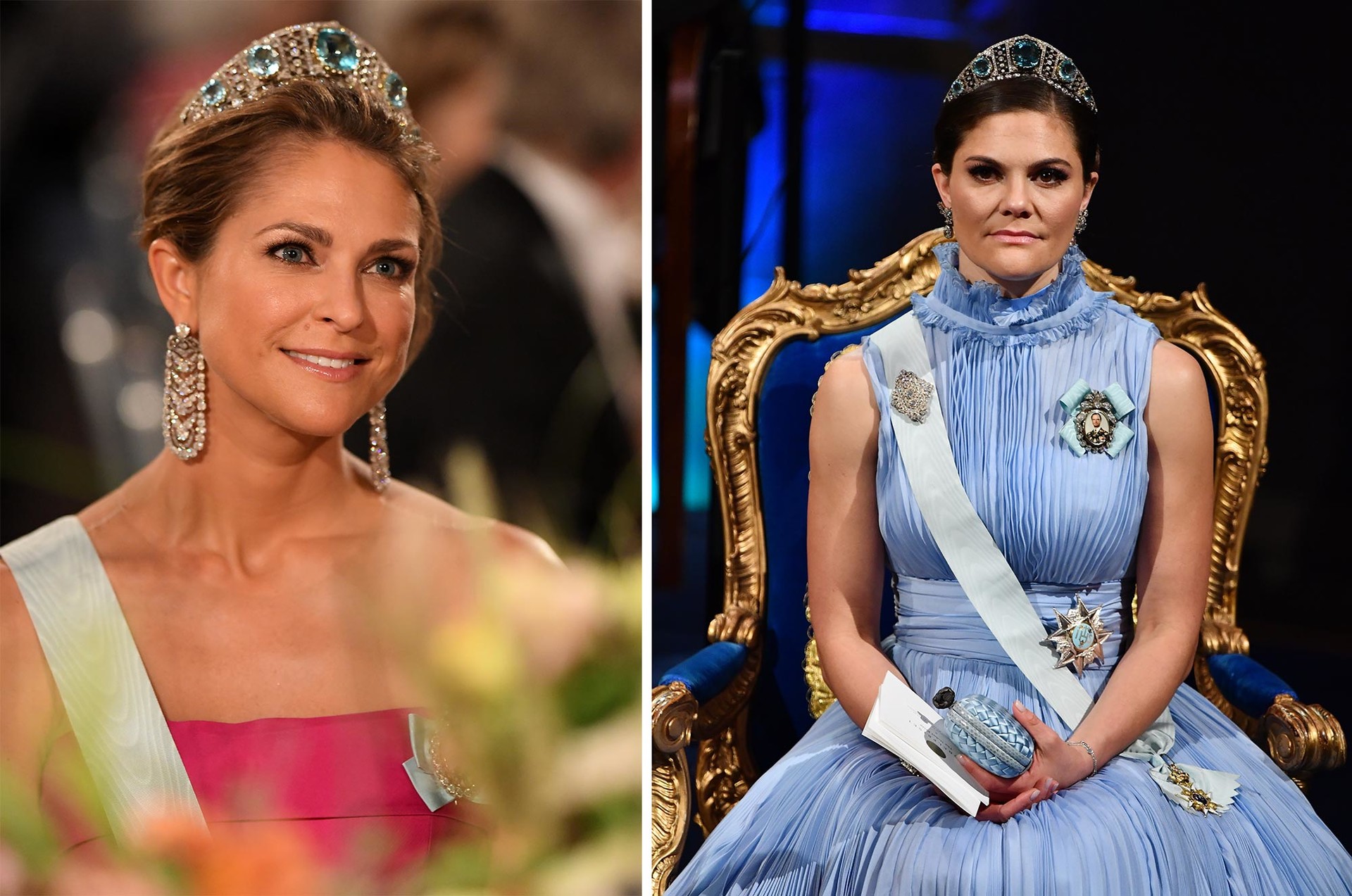 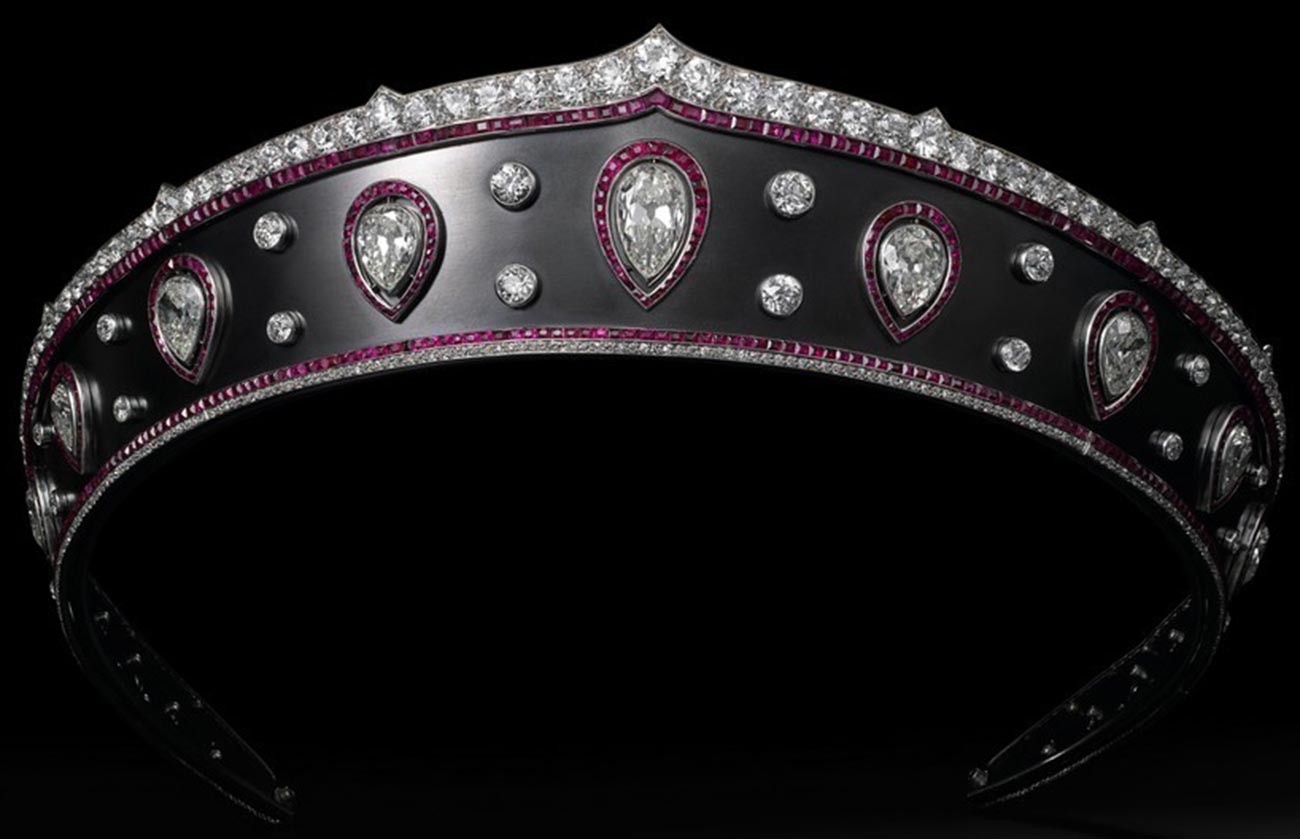 The tiara of the Queen Marie of Romania (Princess Marie of Edinburgh at birth) was made in 1914 by Cartier. At the time, the famous French jewelry firm was experimenting with different materials, and the base in the form of a kokoshnik was made out of blackened steel. The tiara is adorned with platinum, diamonds and rubies. 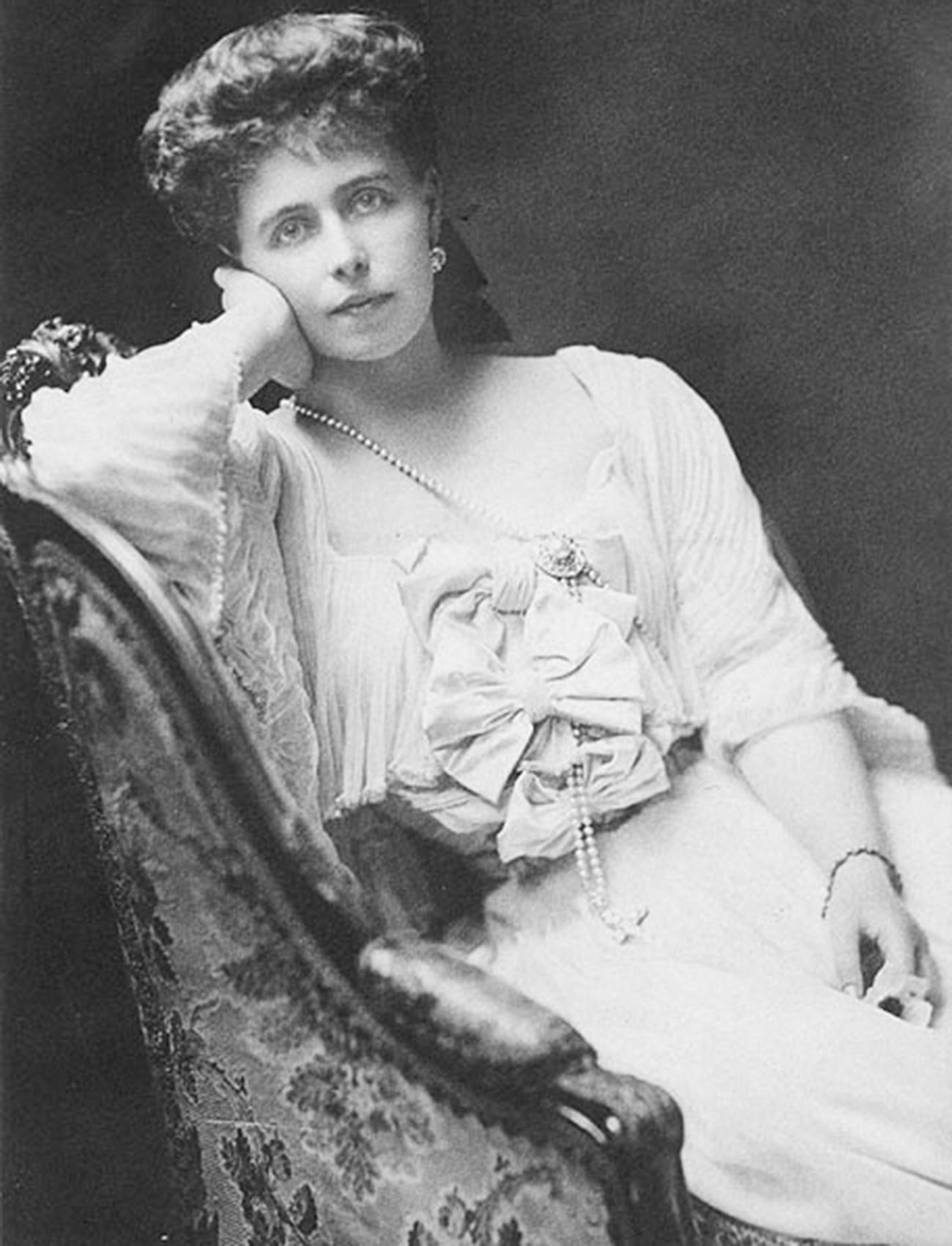 Many of Queen Marie's pieces of jewelry were lost during World War I or sold by her children in the 1940s-1950s, after the monarchy fell. Eventually the tiara was returned to Cartier and is now exhibited as a museum piece. 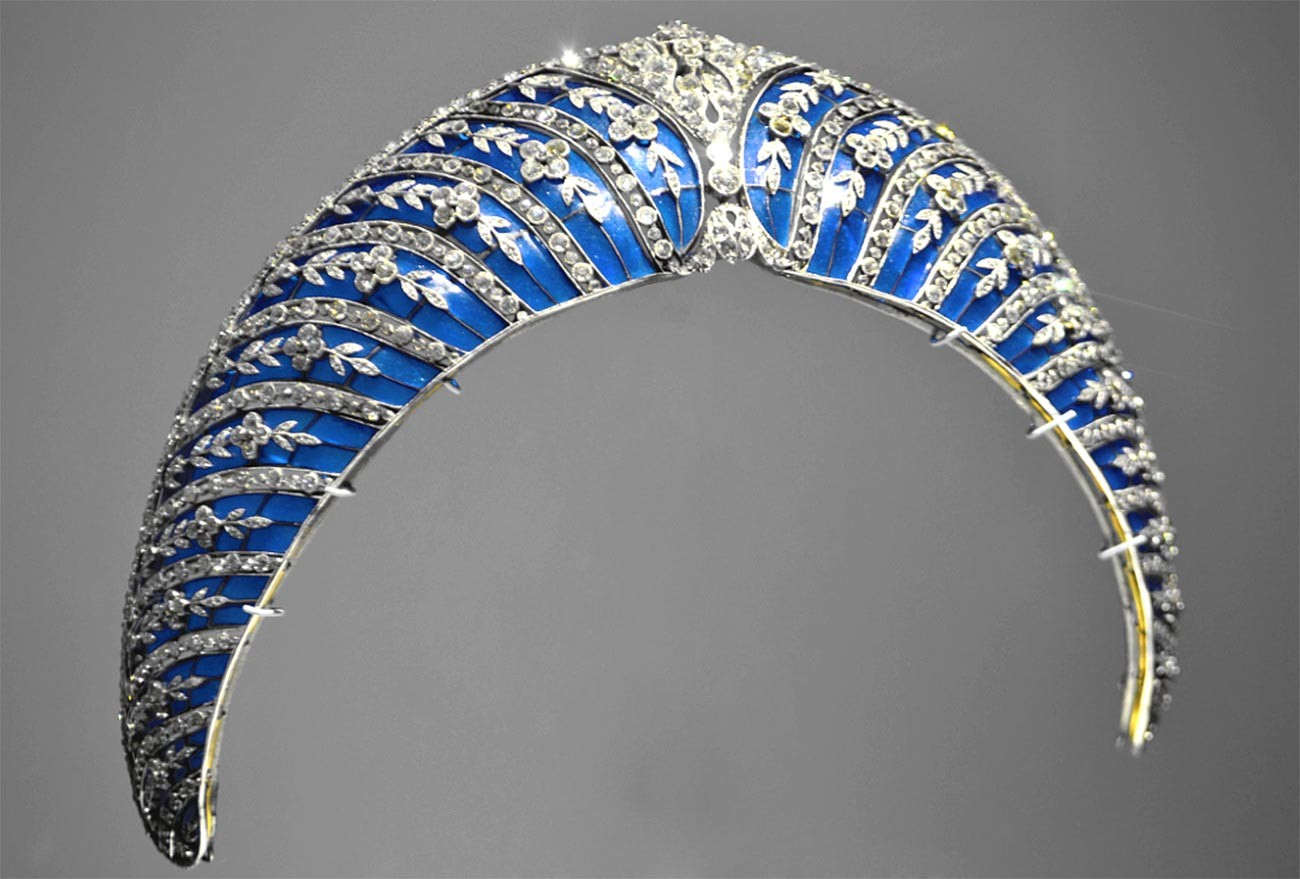 This unusual tiara was made by Chaumet in 1911 for Constance Edwina Cornwallis-West, wife of the Duke of Westminster. The blue enamel looks like fabric, and the tiara is made of platinum and decorated with 280 forget-me-not diamonds. The tiara was sold several times at auctions, but the current duke brought it back to the family. 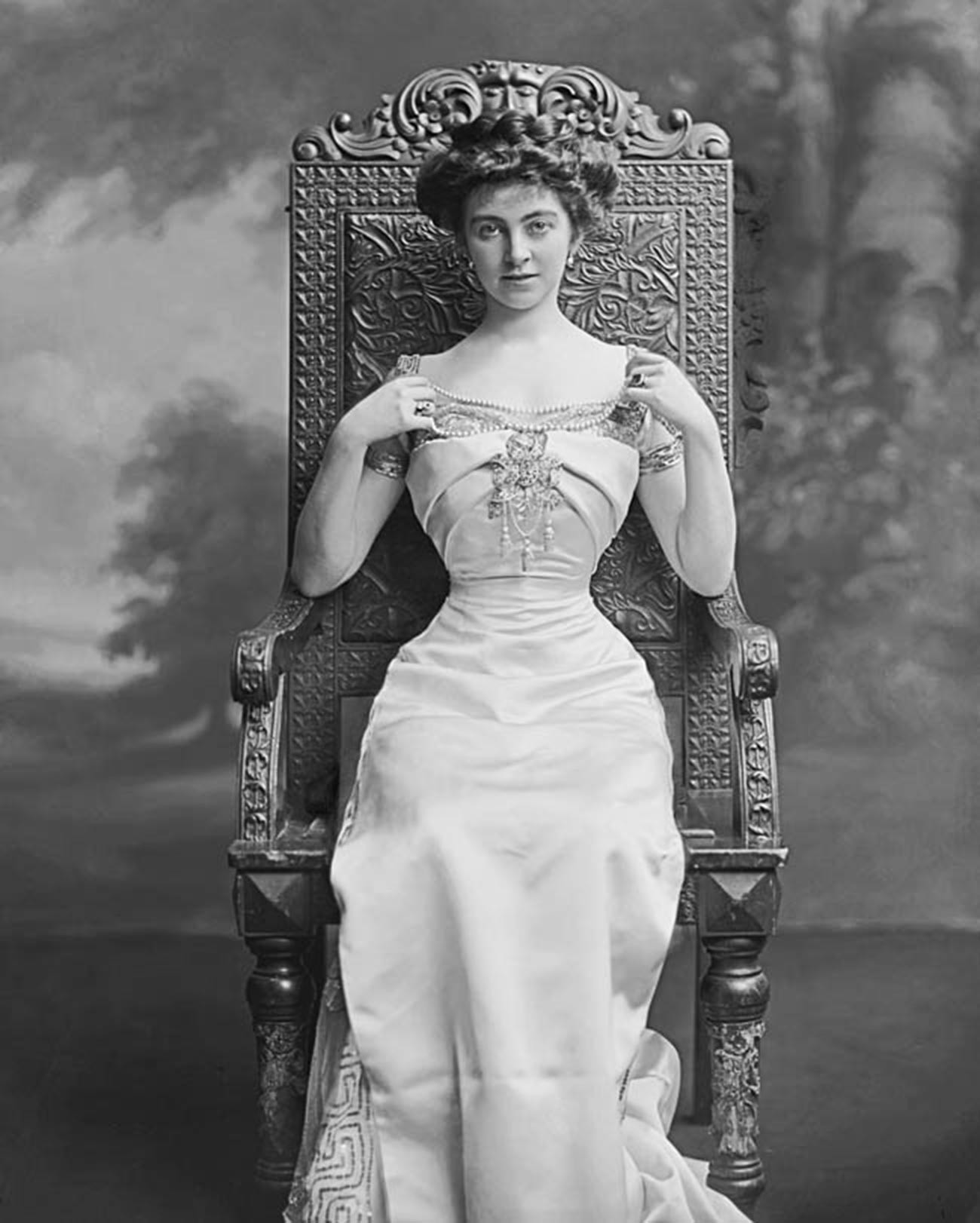 No images of the original owner wearing the tiara have survived.

The Countess of Rosenborg's Garnet Kokoshnik 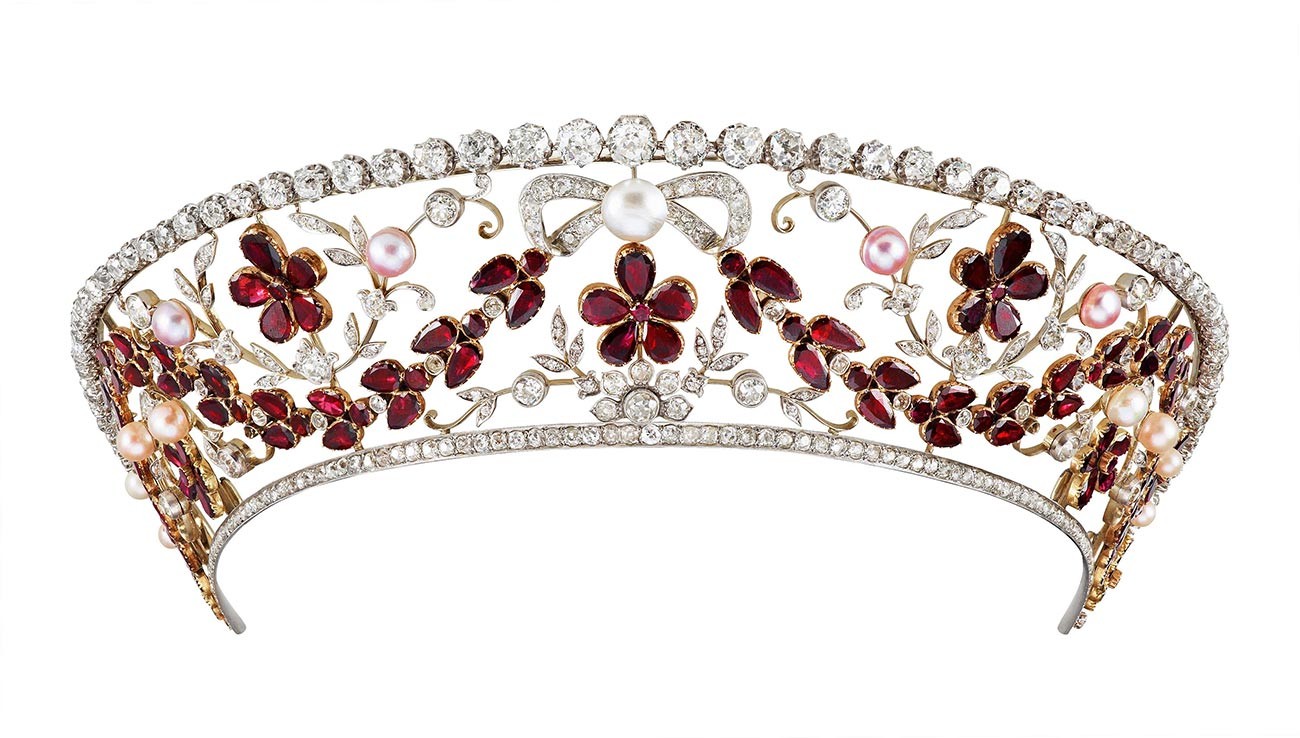 This tiara was made in the 1930s by a Danish court jeweler named Aage Dragsted for the wife of Prince Viggo, grandson of King Christian IX of Denmark. The couple had no children, and so the tiara was first inherited by Prince Viggo's sister-in-law, Princess Margaretha of Sweden and later by her daughter-in-law, Countess Ruth of Rosenborg. 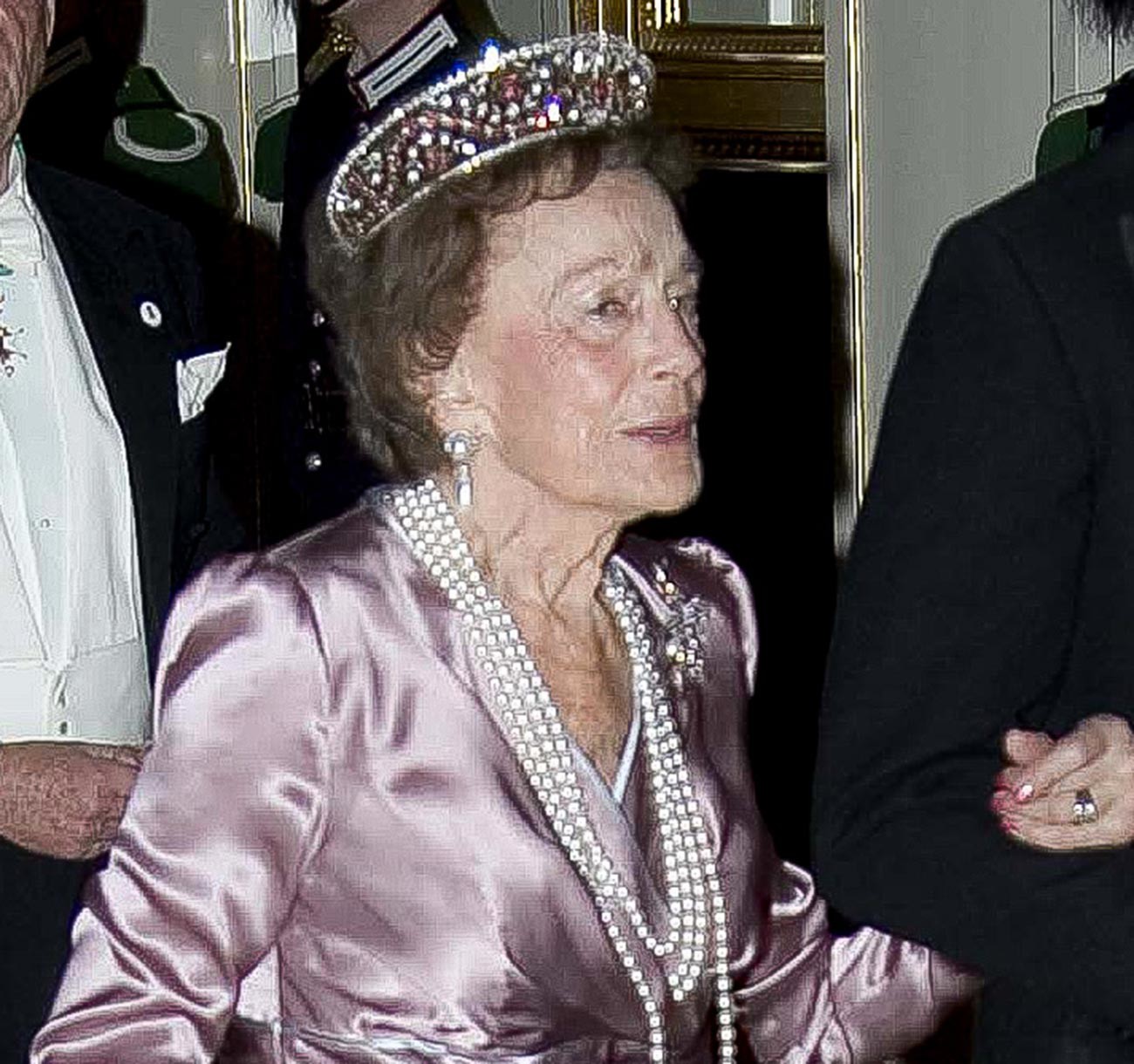 After the latter's death in 2010, this exquisite tiara with garnet flowers and leaves was put up for sale. It was sold in Switzerland in 2014 to an anonymous buyer.