Welcome to Sviyazhsk – an island town on the UNESCO list (PHOTOS) 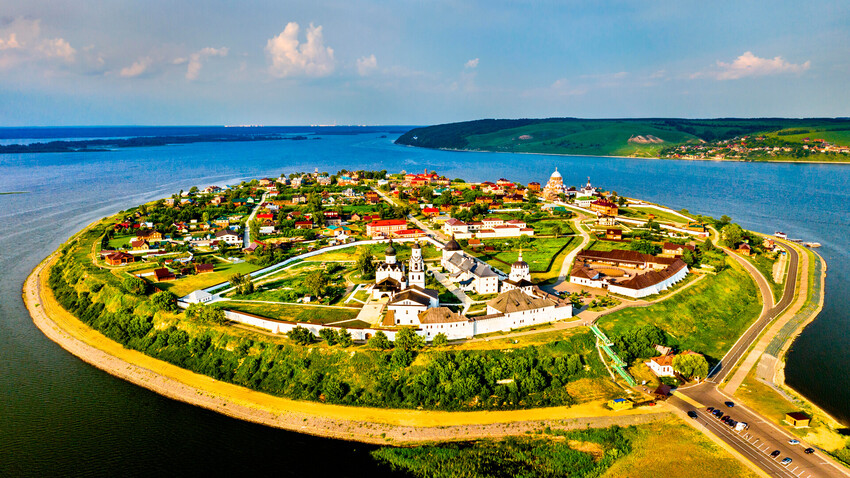 Legion Media
A defensive fortress, a monastery, a concentration camp, an NKVD prison, a psychiatric hospital – this small island near Kazan has seen it all, on which an ancient town stands with a colossal number of monuments of Russian antiquity per square meter.

Today, the small village Sviyazhsk, situated on an island of an almost perfectly round shape, is peacefully accepting tourists. Its monastery walls, medieval streets, golden domes and horse arena create an image of Russian antiquity (many of those are actual real monuments of medieval architecture, protected by UNESCO). However, it wasn’t always like this: The peaceful-looking Sviyazhsk more than once became the stage for bloody and dramatic historical events. 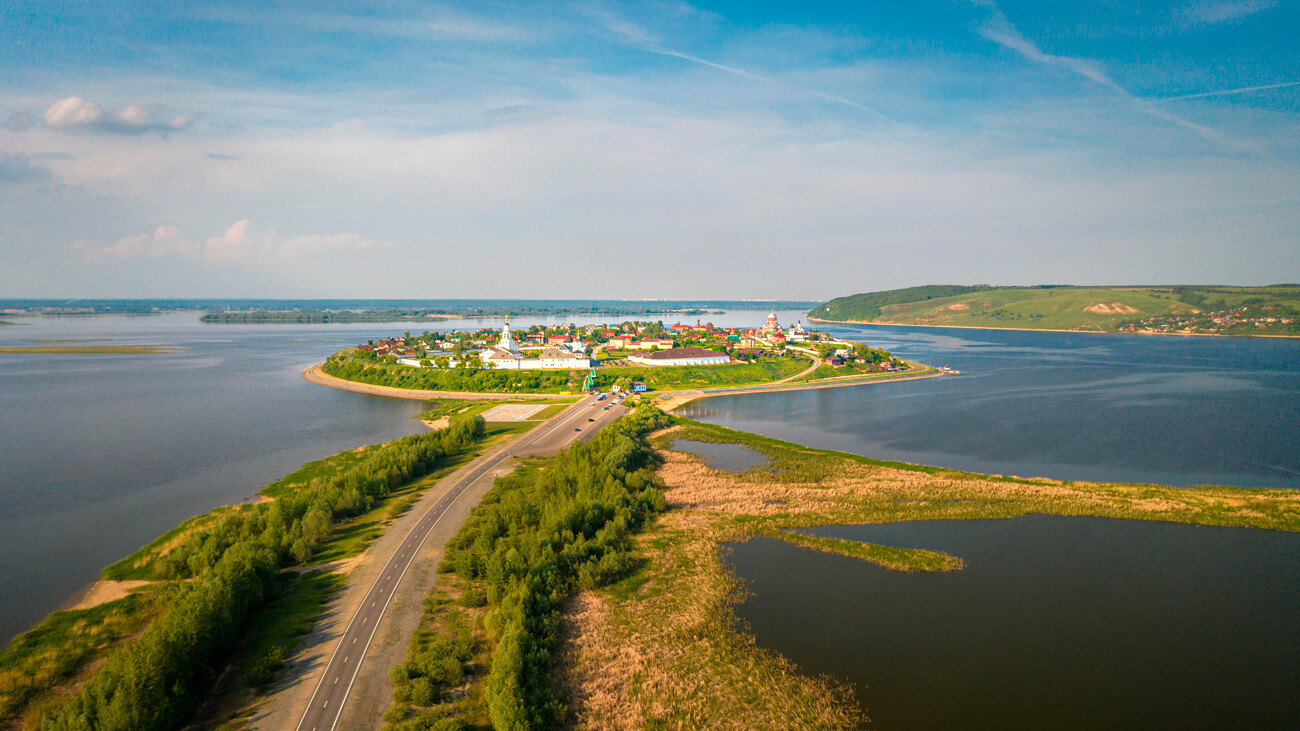 Let’s begin with the history of its founding. In the middle of the 16th century, Tsar Ivan the Terrible attempted to conquer the capital of the Khanate of Kazan – the city of Kazan. But, he had bad luck: to achieve some kind of progress, his troops needed a base of operations. An island 30 kilometers away from Kazan at the confluence of the rivers Sviyaga, Shchuka and Volga was perfect for that. But how could one build a fortress so close to the Tatars? 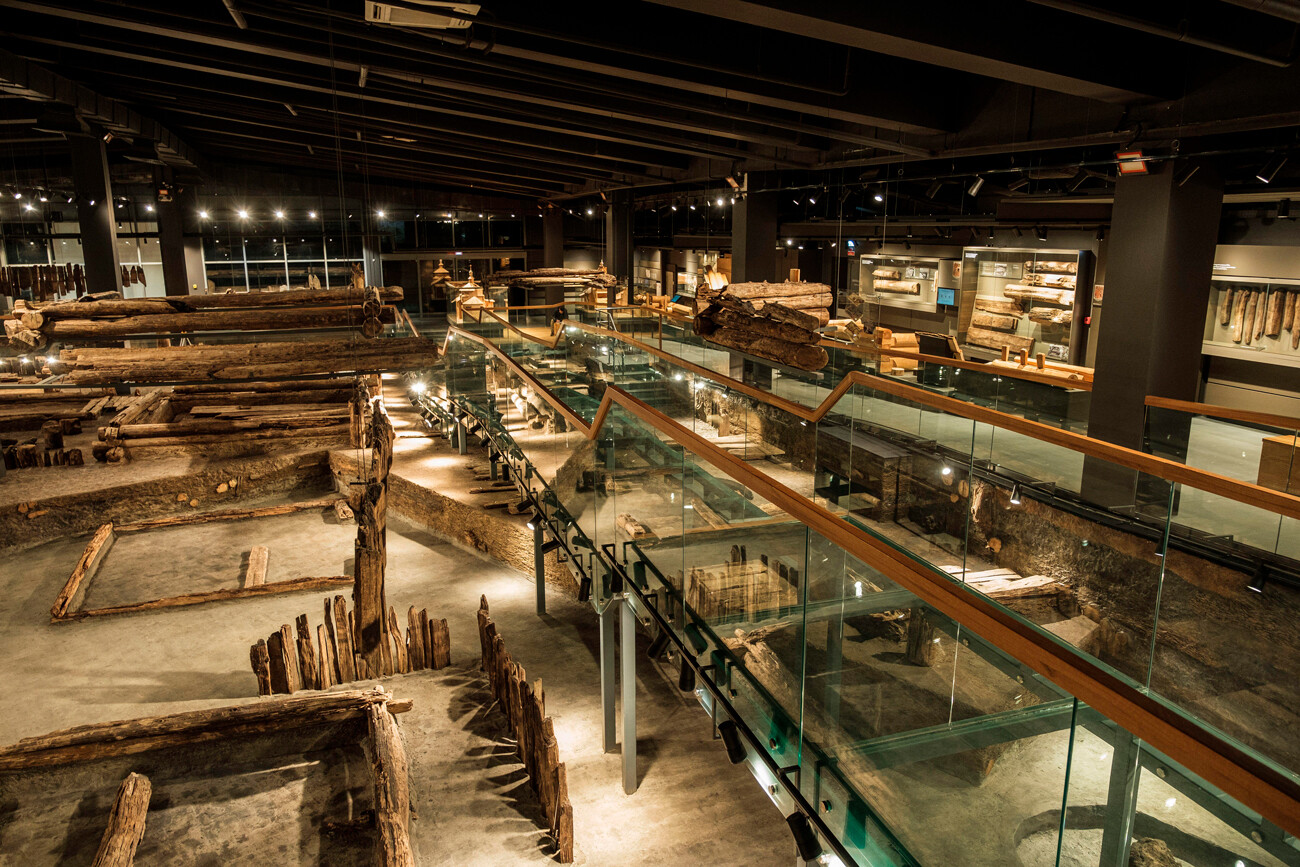 Modern museum of archeology of wood in Sviyazhsk

This is how it was done: first, the whole fortress was built from logs in the town of Myshkin, then the logs were numbered, the fortress – disassembled and, with the coming of spring, the logs were rafted on the Volga River to the island. In just four weeks in 1551, a lifeless island became Ivan the Terrible’s stronghold named Sviyazhsk. 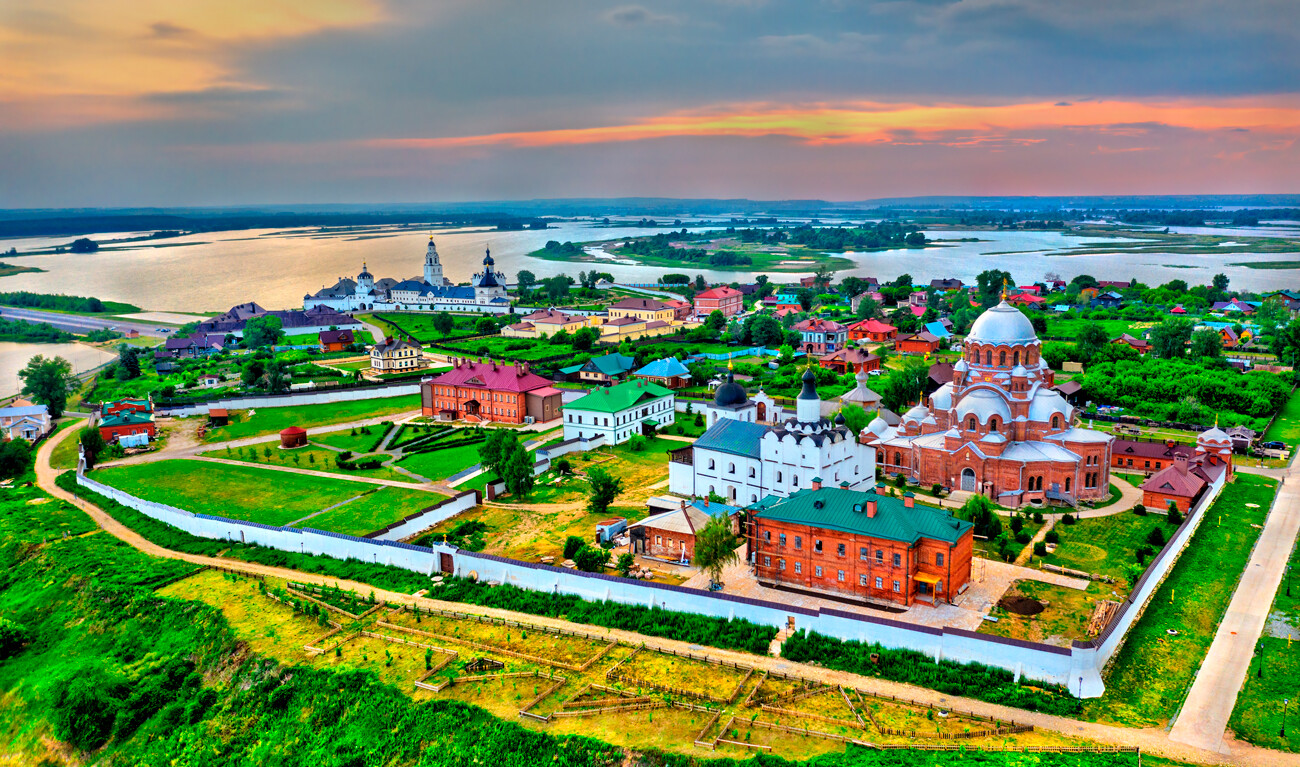 The fortress (in its size, it exceeded even the Moscow Kremlin at that time) was fully worth the effort: in one year after its founding, Kazan was conquered. 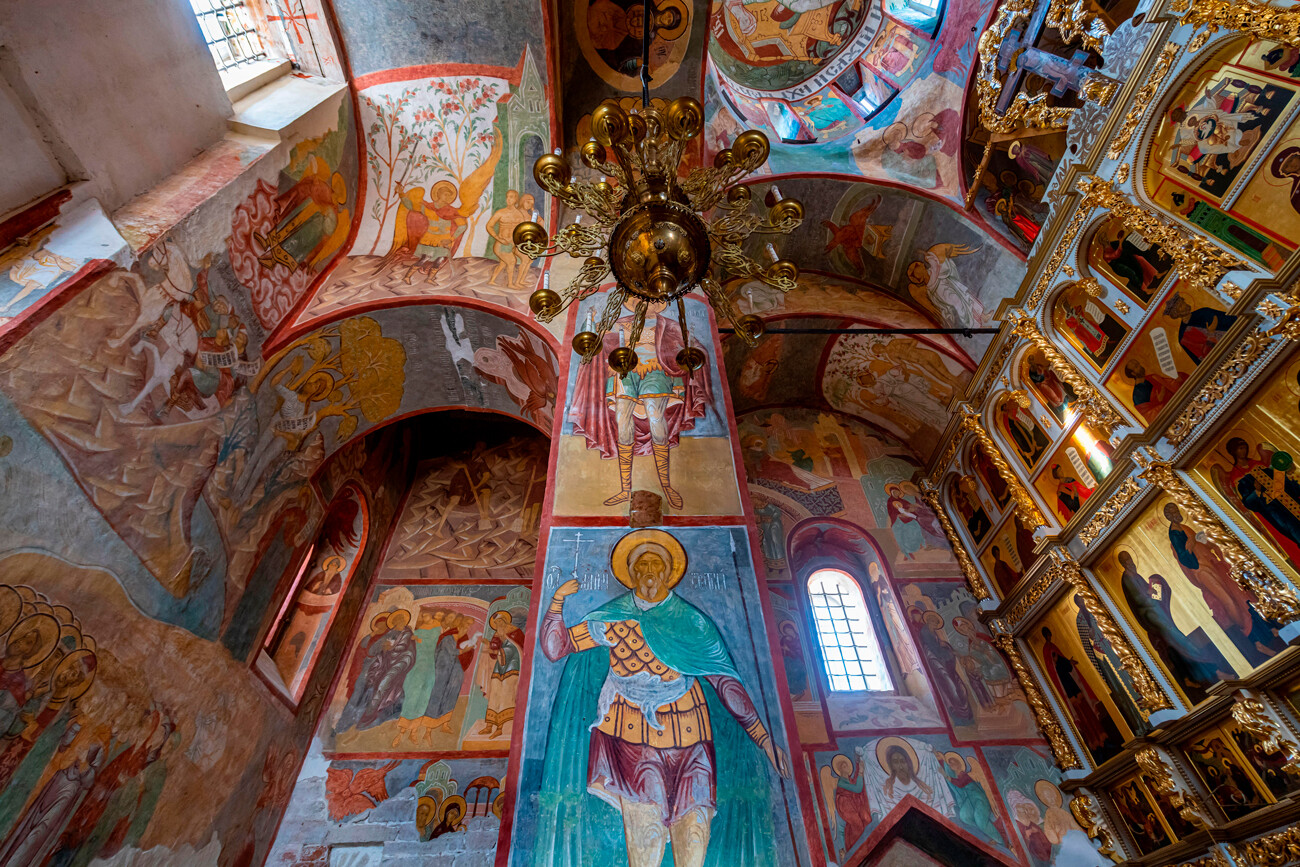 Initially, the fortress town had 18 towers and residential buildings and an Orthodox church, but, after gaining its military glory, Sviyazhsk quickly became a center of Orthodoxy with a large number of holy places. 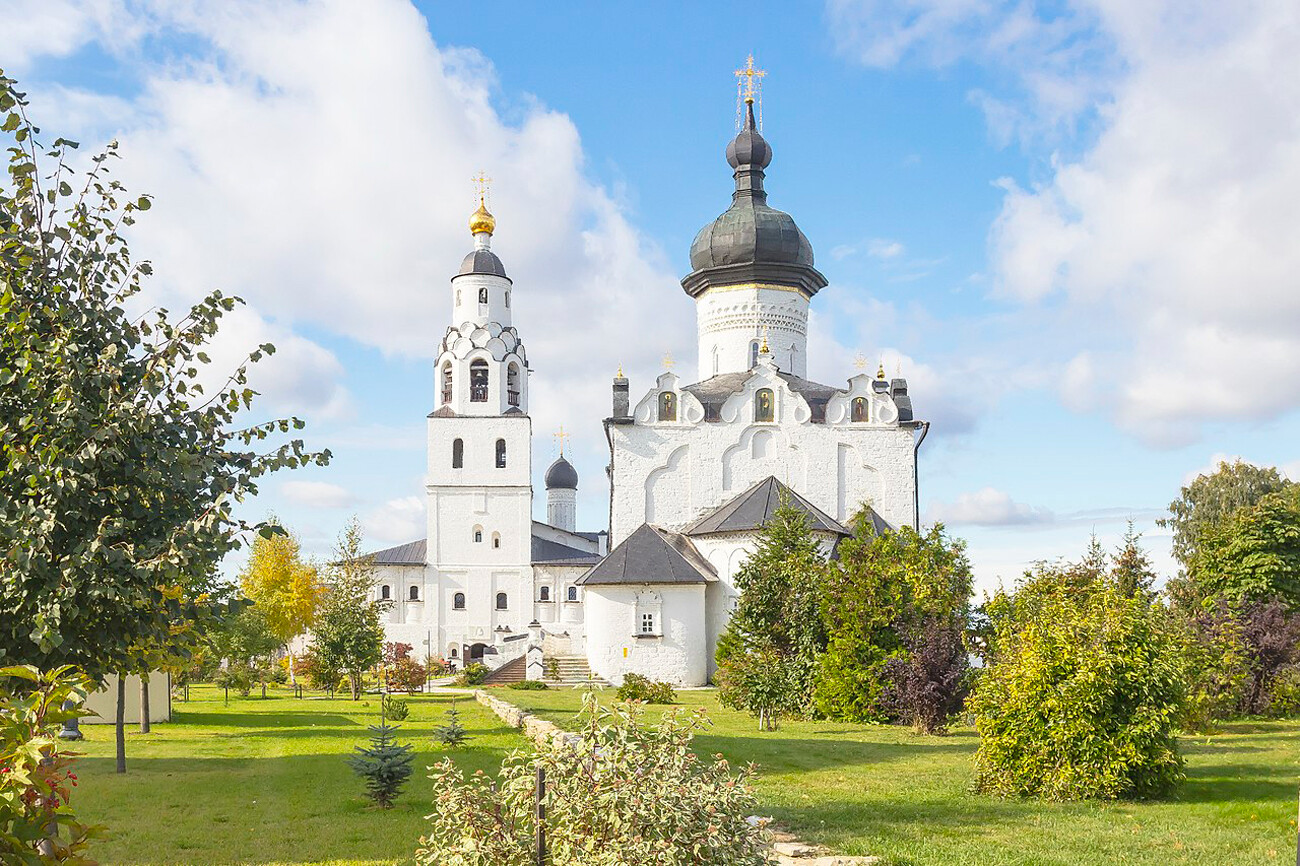 After just a few years since the town’s founding, it had the Assumption Monastery and, later, the Assumption Cathedral that, today, can boast the only fresco of Saint Christopher with a horse’s head (usually he’s depicted with a dog’s head) in the world. Since 1667, animal-like images of the saints were prohibited by the Church and destroyed, but this fresco got lucky: for a long time, the relics of the first parson of the monastery stood against the wall with the fresco, with a ciborium towering over it – a wooden construction with four arches and columns. It covered the fresco that was already darkened and inconspicuous. 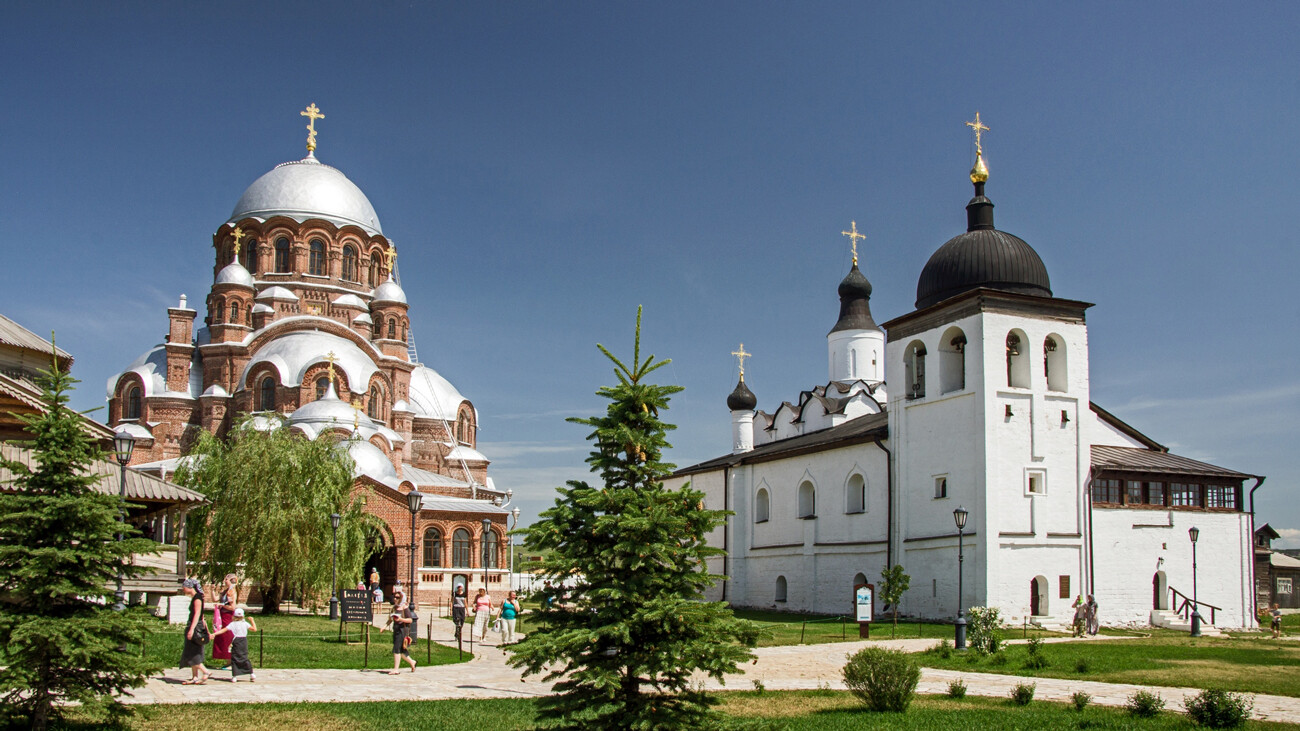 Along with it, a major part of other mural paintings and buildings survived to the present day. The island has no less than 37 cultural monuments, including two monasteries (aside from the Assumption Monastery, it also has the 16th century Ioanno-Predtechensky Monastery), as well as seven other churches. Since 2017, the entire territory of the island is under UNESCO protection. 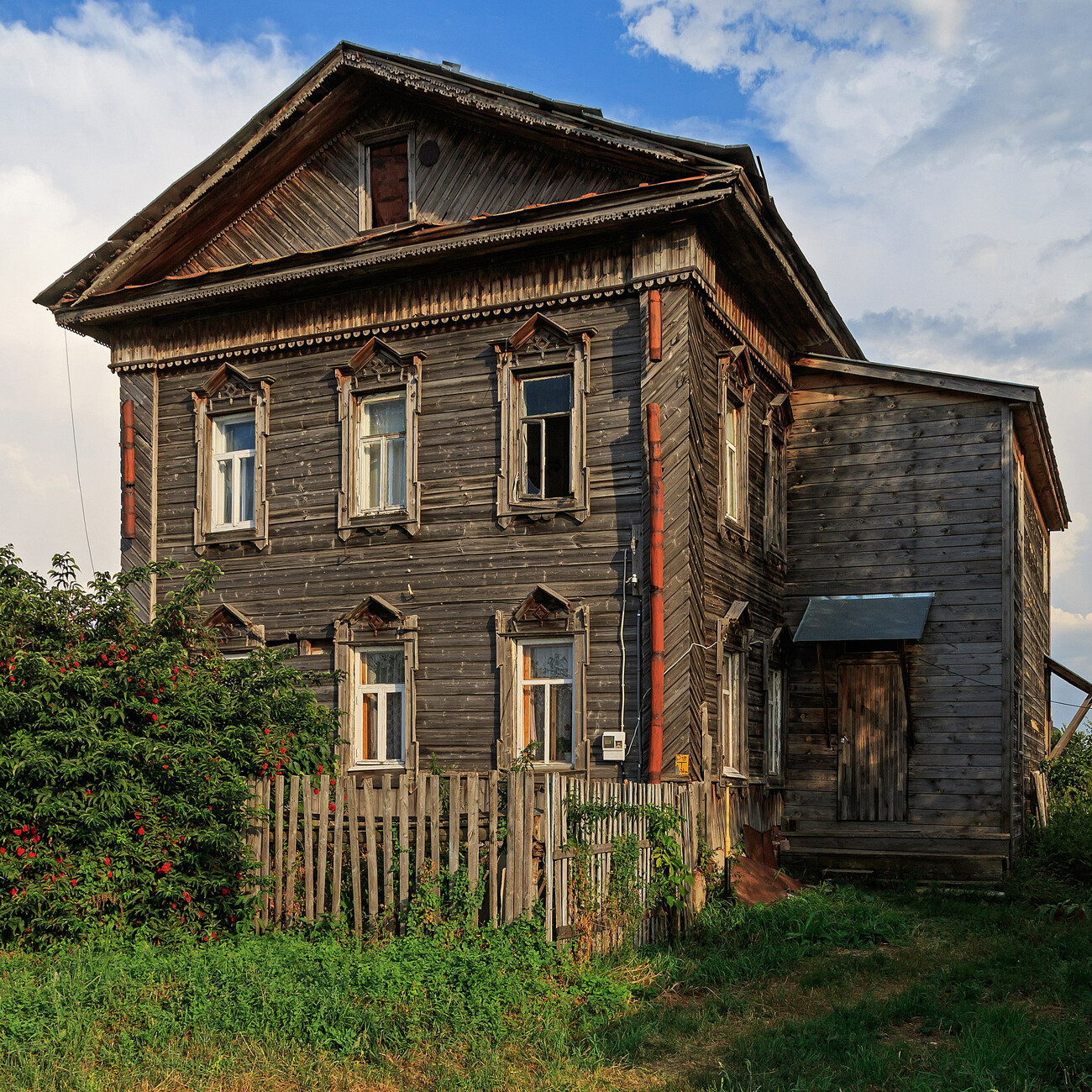 The town has many secular buildings along with religious ones. In 1781, the town’s population was about 10,000 people. 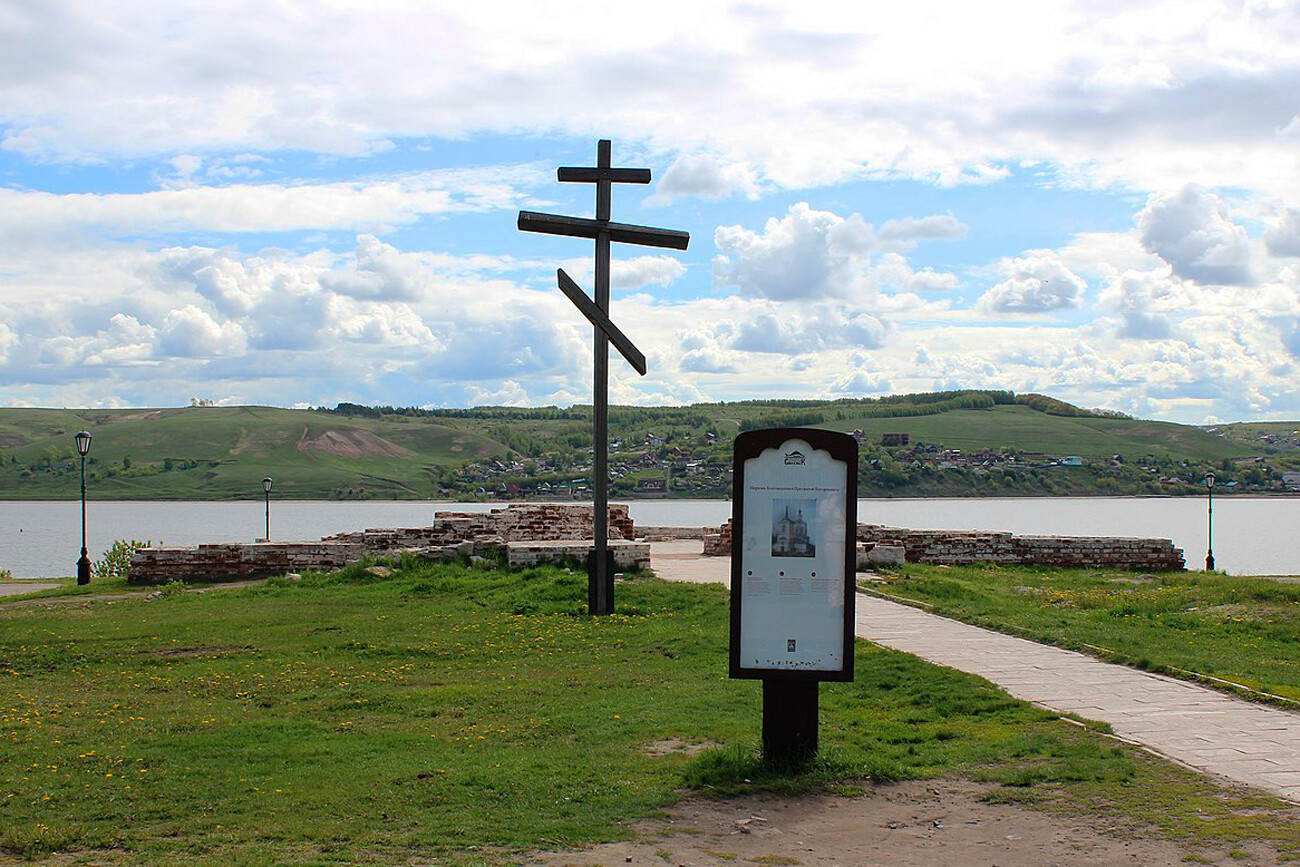 Ruins of the Church on Christmas Square

However, many of these buildings of the 19th century were simply destroyed by the bolsheviks (in particular, the Church of St. Sophia and St. Nicholas, the Church of the Annunciation of the Blessed Virgin Mary, the Cathedral of the Nativity of the Blessed Virgin Mary, Church of St. Herman and etc.). Nowadays, you can see wooden stands in Sviyazhsk with pictures of the missing buildings. 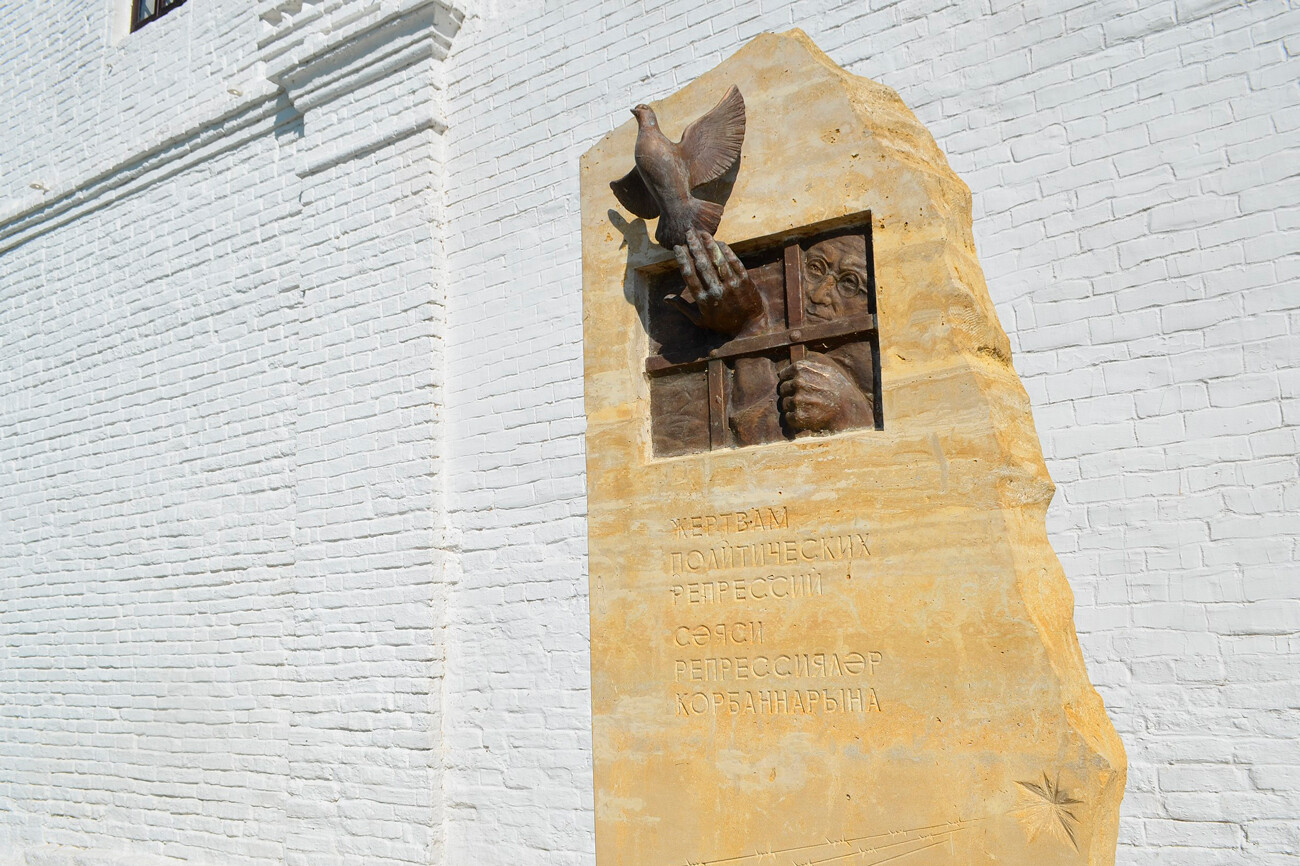 Memorial buildings also remind of hard times – the ‘Communards’ Wall’ and the memorial to the victims of political repressions. 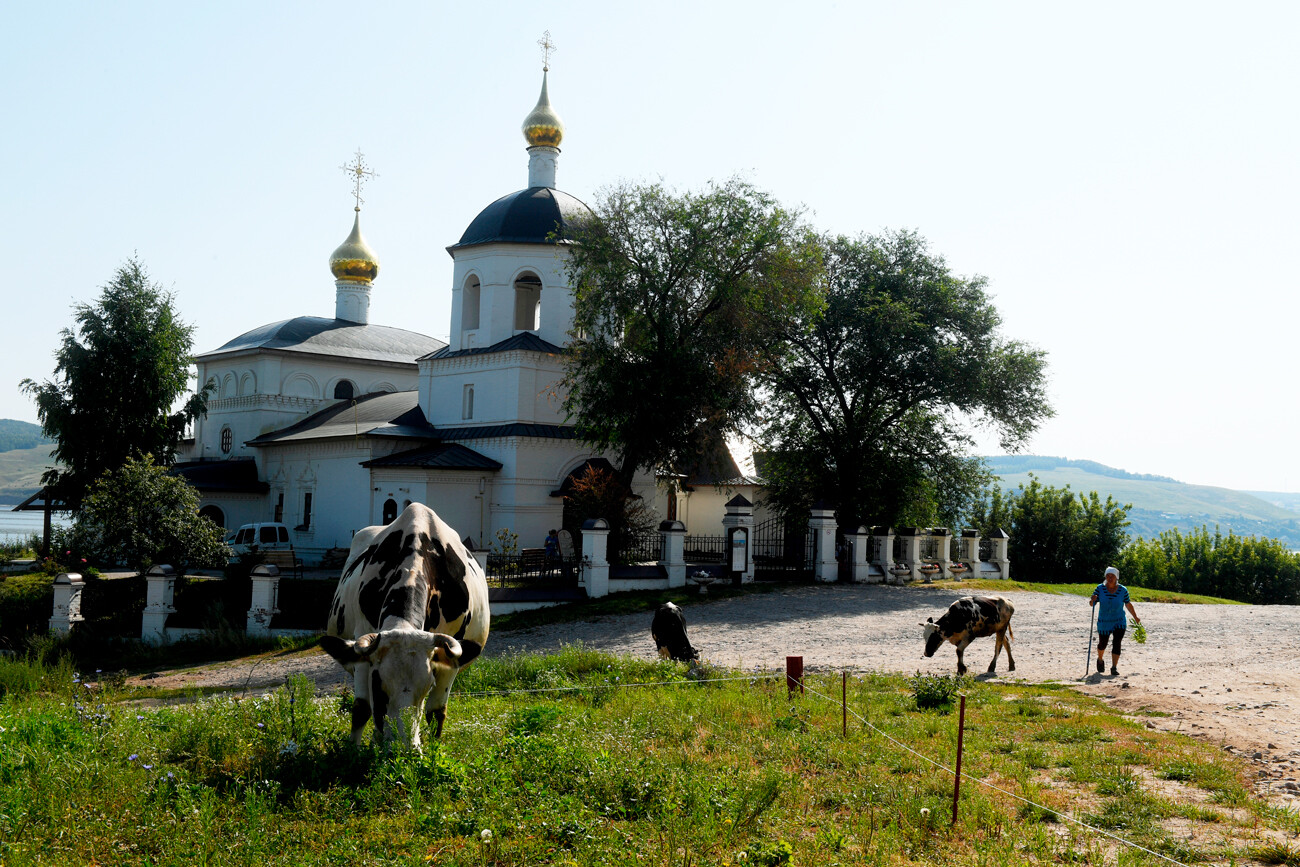 Church of Saints Constantine and Helena

After the 1917 Revolution, Sviyazhsk went from a “monastery town” (this is how it was known) to a place for repressions. 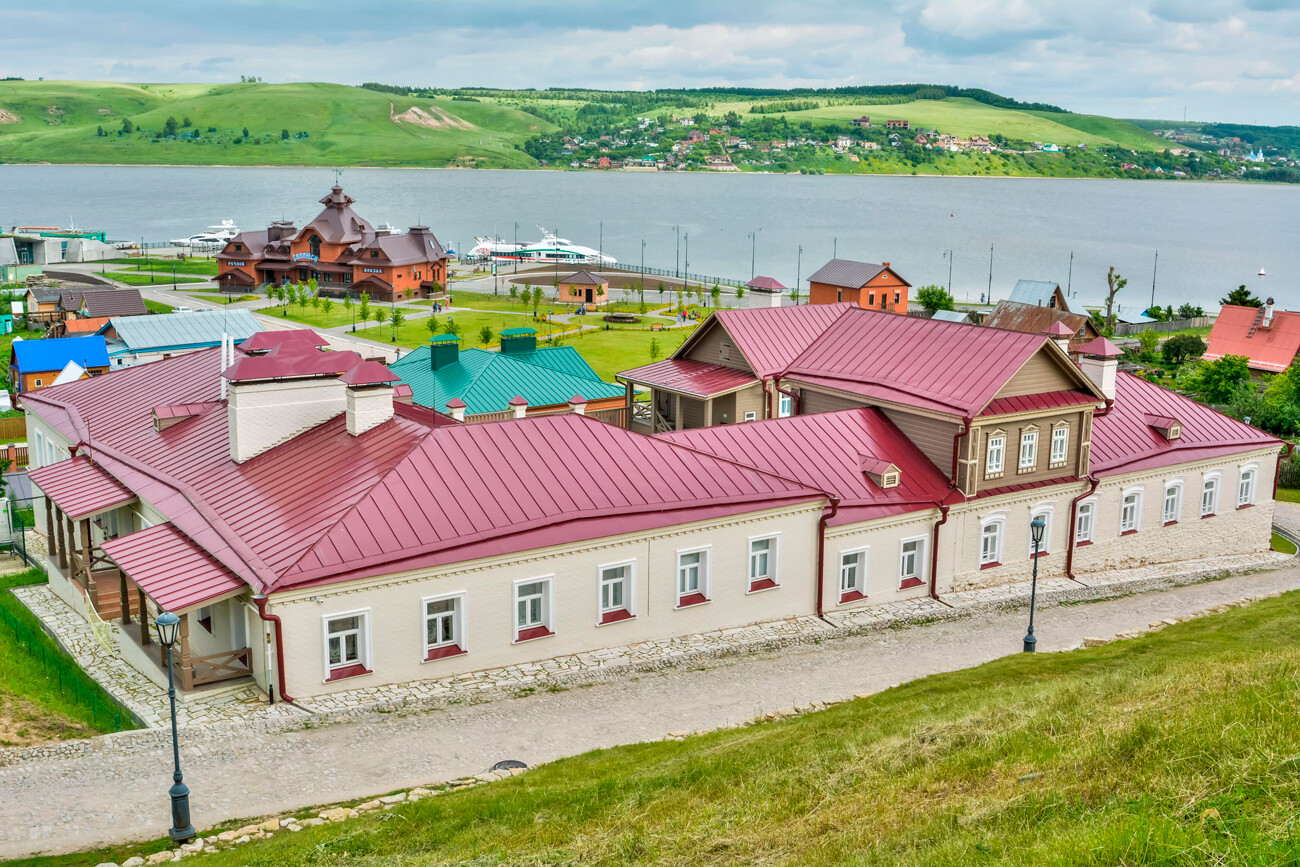 Those who rejected the new order were sent there and shot; starting from the 1930s, Sviyazhsk had a juvenile penal colony, an NKVD prison and then a psychiatric hospital. The memorial to the victims of political repressions appeared after a large mass grave was discovered: the analysis of the remains showed that some of these people were shot while the others died from starvation at the beginning of the 1940s. 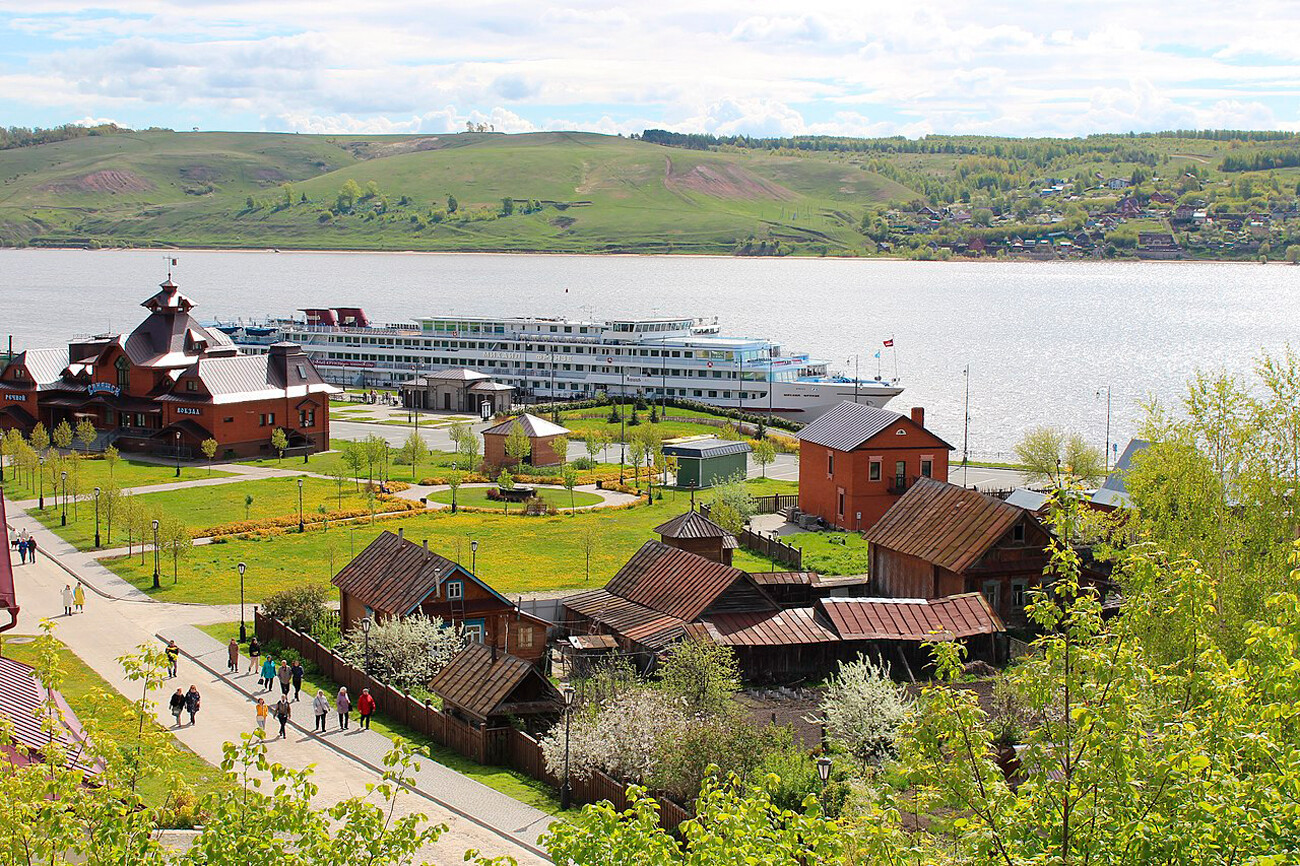 Today, tourists from across the globe visit it as an ethnographic complex – to feel the spirit of Russian history and experience the medieval attractions. 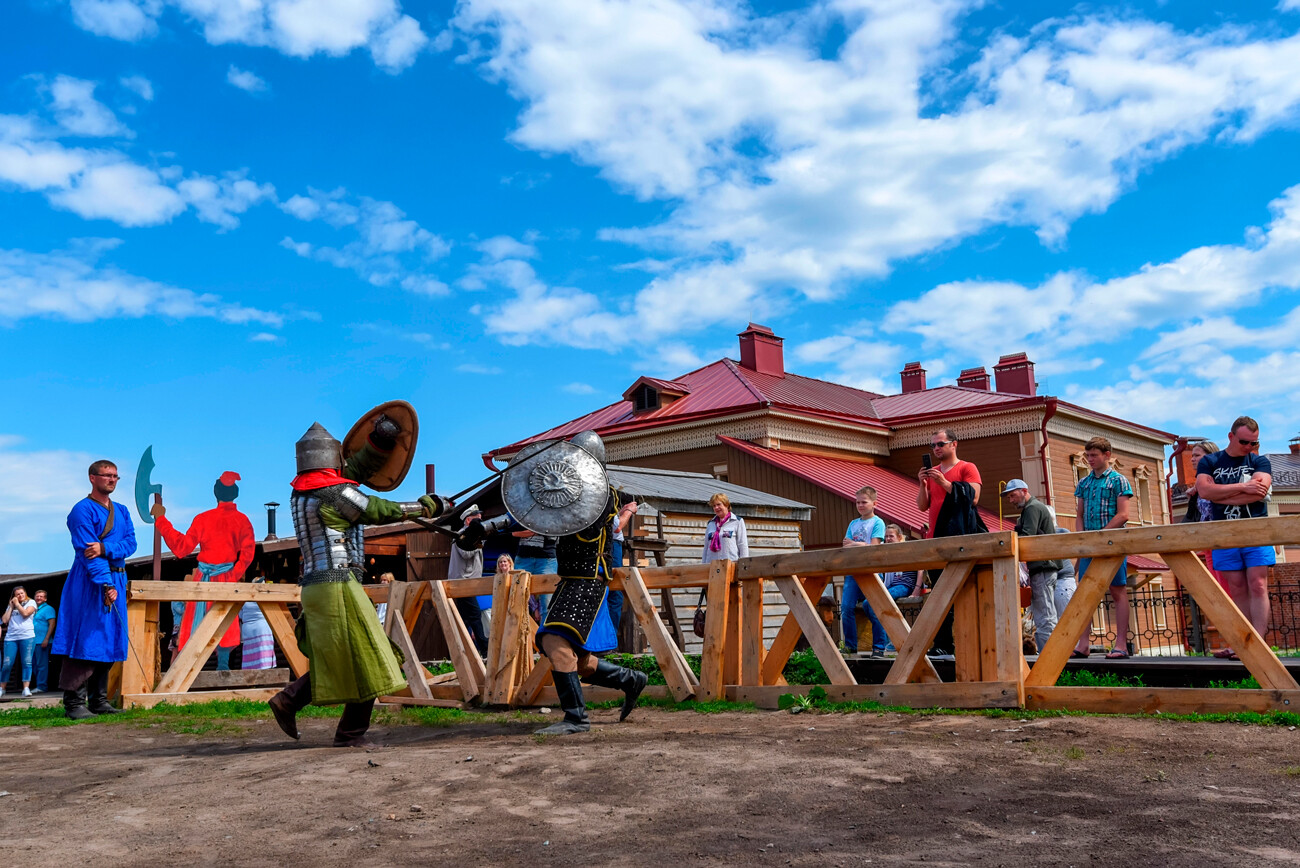 There is a pottery workshop, a smithy and a shooting gallery with medieval arms on the territory of the island. For kids, there are different craft workshops where they can learn leather embossing or make their own pottery. 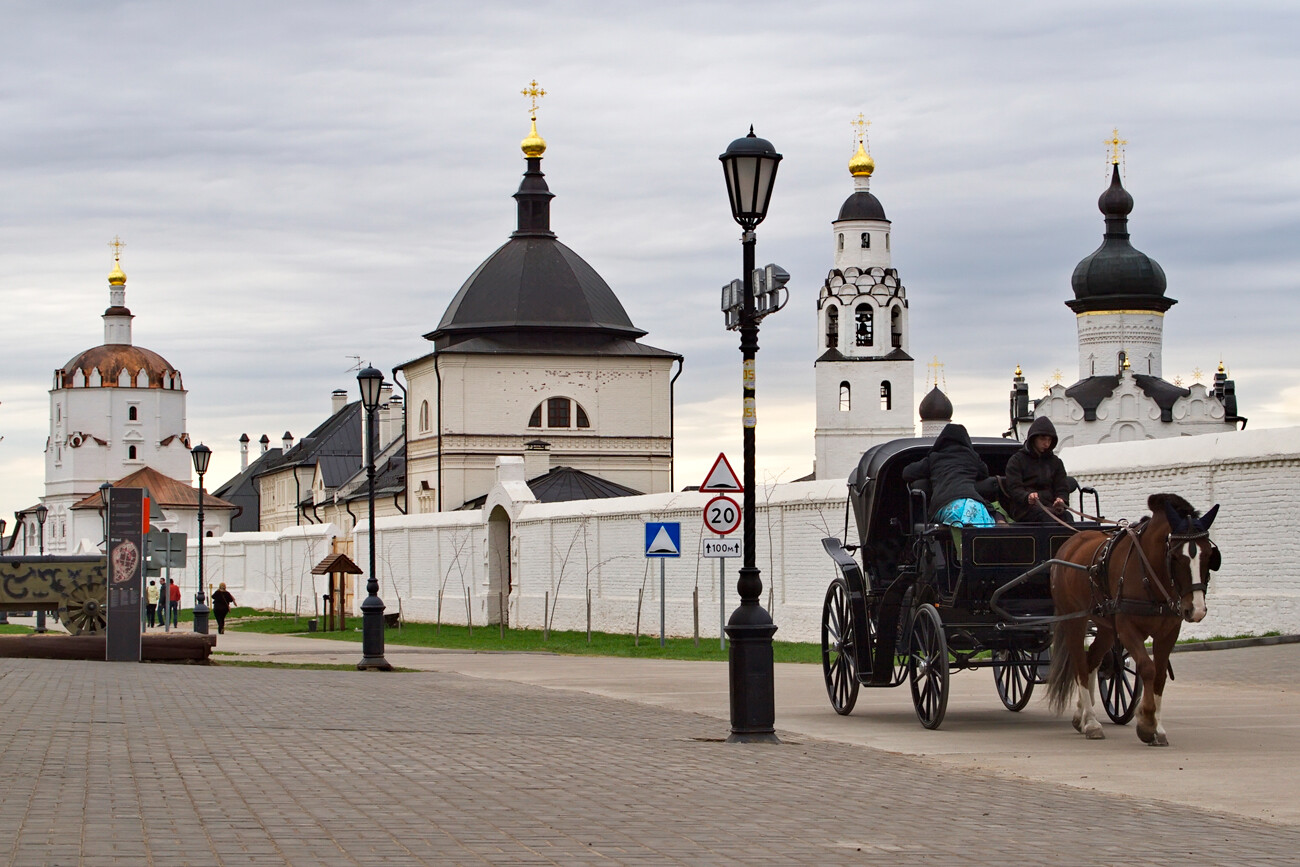 However, the horse arena with working stables and a place for horseback riding is now considered the main attraction.