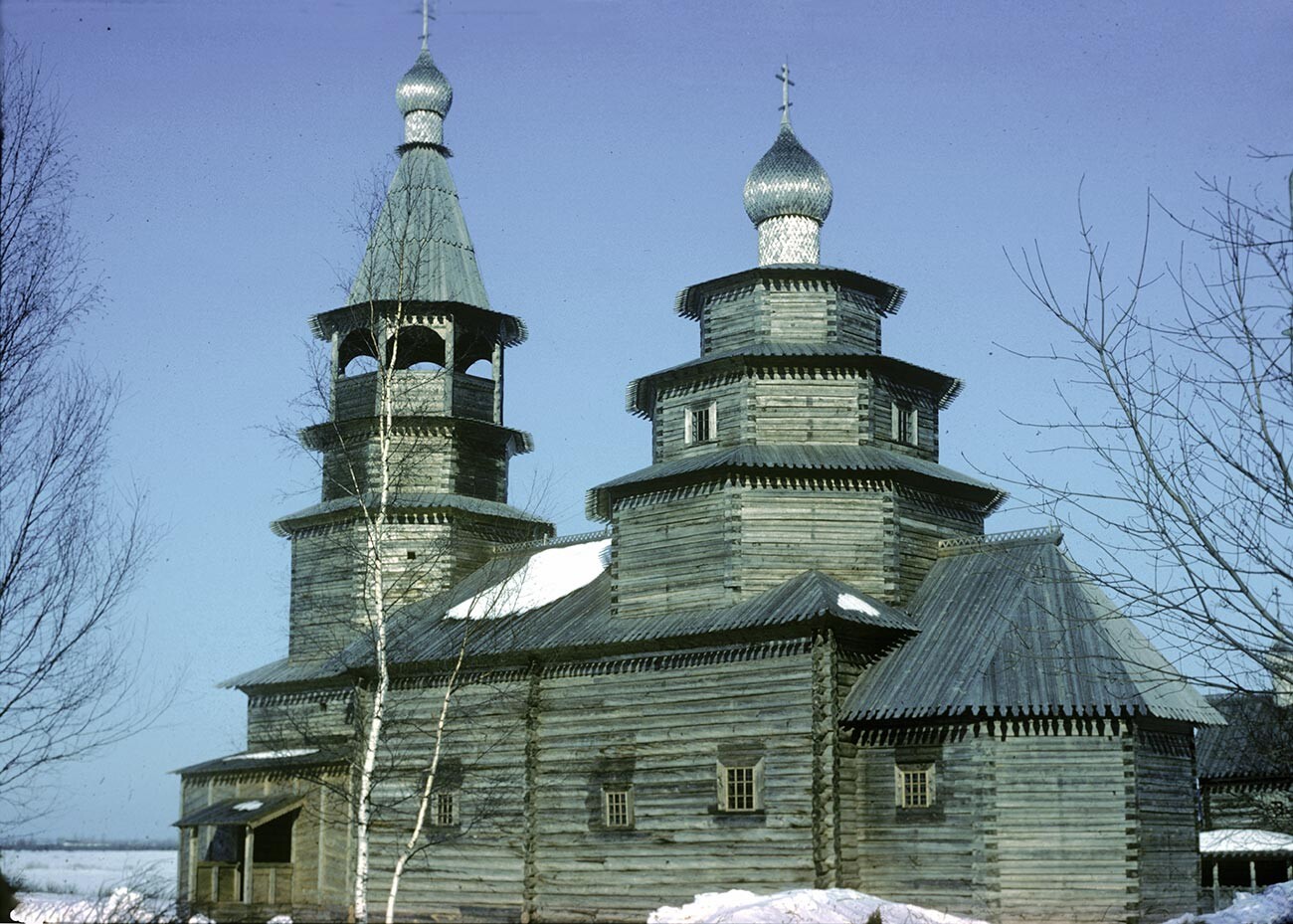 At the beginning of the 20th century, Russian chemist and photographer Sergey Prokudin-Gorsky developed a complex process for vivid color photography. His vision of photography as a form of education and enlightenment was demonstrated through his images of architectural monuments in the historic sites throughout the Russian heartland.

As part of his journeys in the upper Volga area in the summer of 1910, Prokudin-Gorsky photographed the ancient town of Torzhok, located 60 kilometers west of Tver. My several visits to Torzhok occurred between 1994 and 2010. 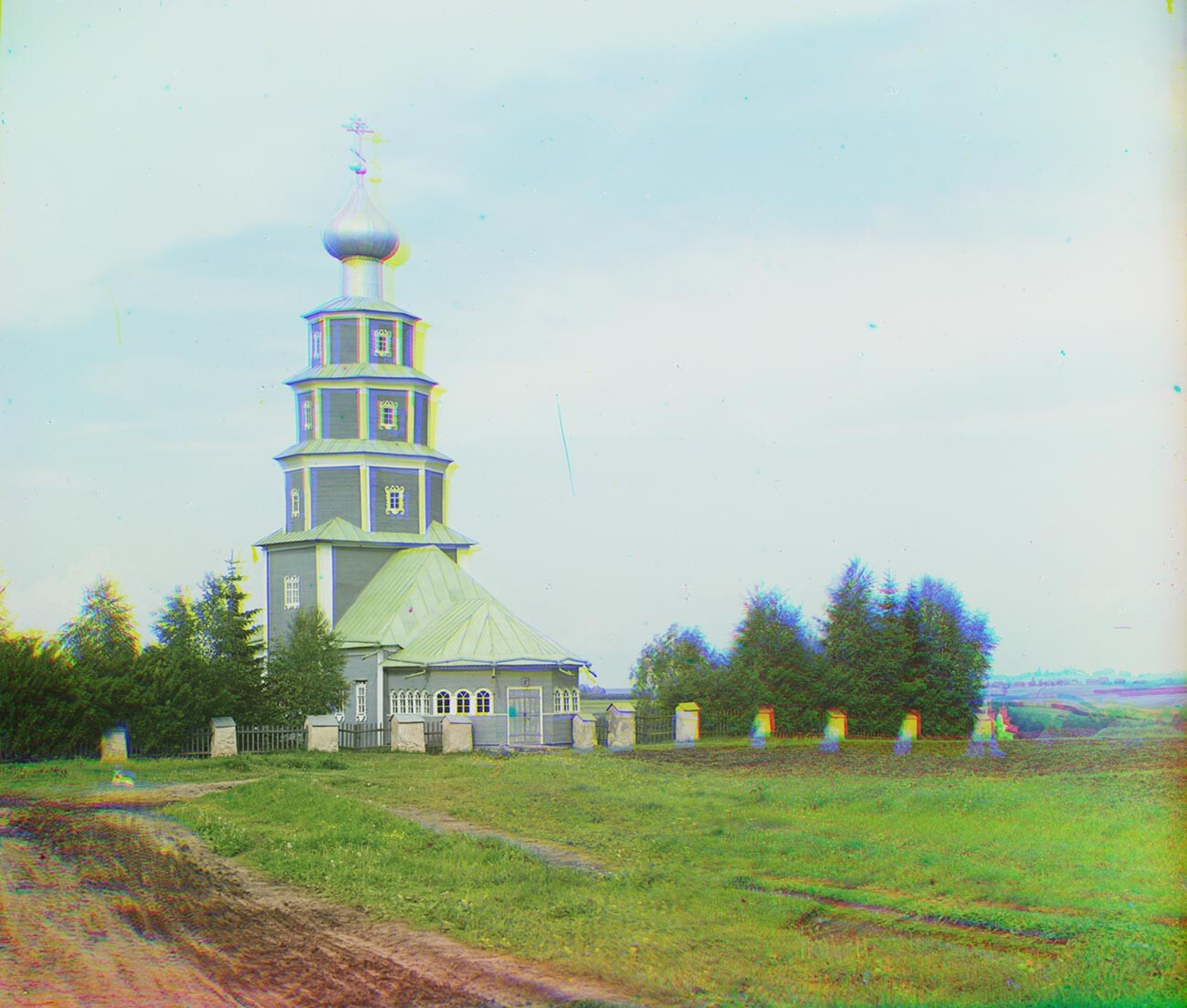 Referred to in written sources as early as 1138, but existing as a settlement much earlier, Torzhok thrived as a trading center located on the Tvertsa River, just above its confluence with the Volga (its name derives from the word torg or “trade”). 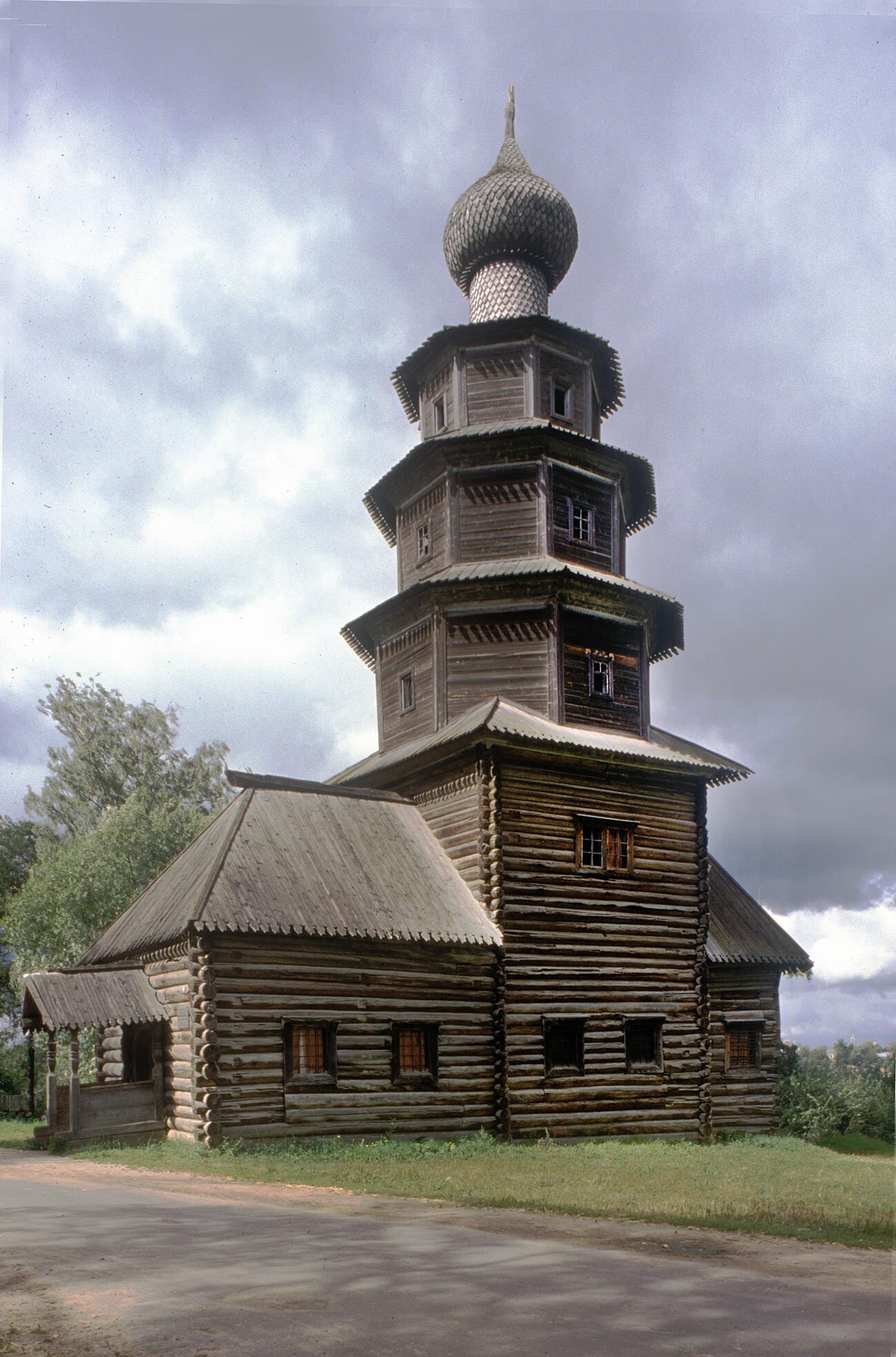 As an outpost of the medieval commercial center of Novgorod the Great, the town was frequently contested during its early history. The rise of Muscovite power in the 15th century brought an end to Novgorod’s independence in the 1480s and, in 1478, Torzhok entered the domains of Moscow’s ruler Ivan III (the Great).

The dominant historic feature of Torzhok is the majestic Monastery of Sts. Boris and Gleb, situated on the high right bank of the Tvertsa River and considered by church sources to have been founded in 1038. The monastery, which Prokudin-Gorsky photographed in detail, is particularly notable for its monumental churches in the neoclassical style. 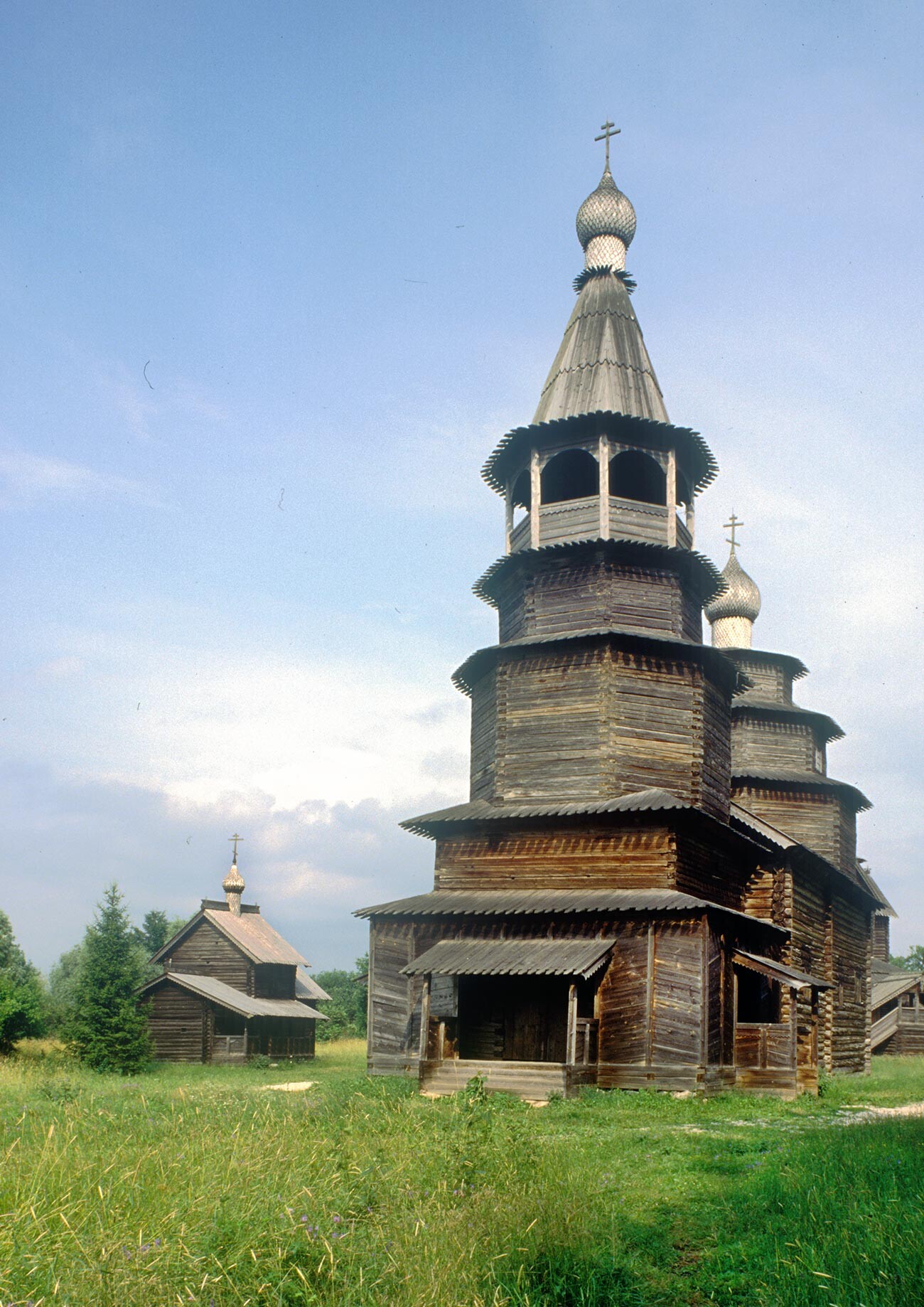 Very different in style, but no less remarkable, is the wooden Church of the Tikhvin Icon of the Virgin, located a short distance downriver on the same bank as the Boris and Gleb Monastery. Prokudin-Gorsky was obviously intrigued by this towering log structure, which is among the few wooden churches that he photographed. My photographs of the church were fortunately taken before the appearance of restoration scaffolding in 2007. 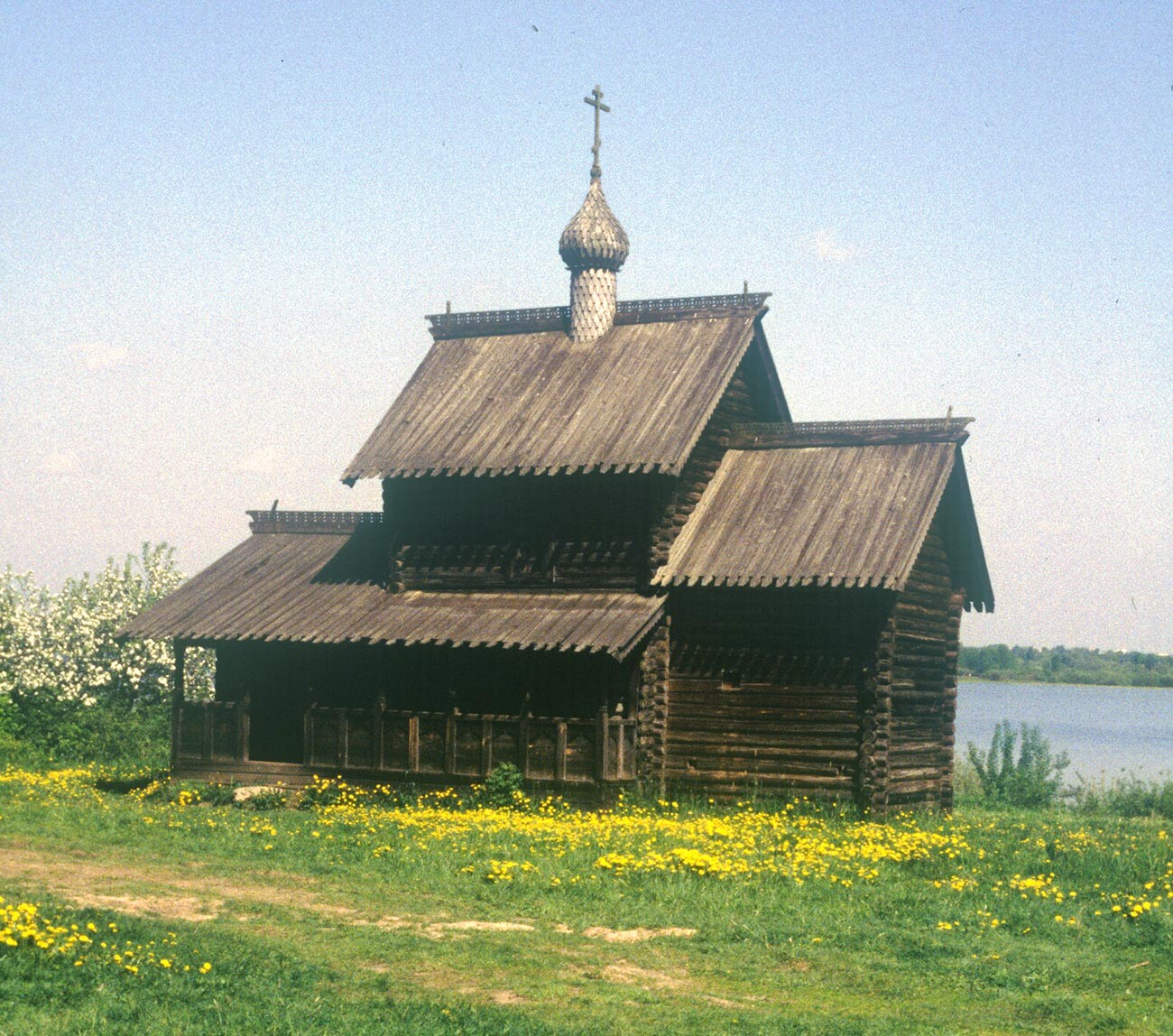 Vitoslavlitsy. Church of the Trinity from the village of Nikulino. Southeast view. May 29, 1992

The church was originally dedicated to the Ascension - a dedication admirably suited to its soaring form. Although the construction date is subject to debate, one version states that a wooden church was built on the site in the 1650s and then rebuilt in its present form in 1717. 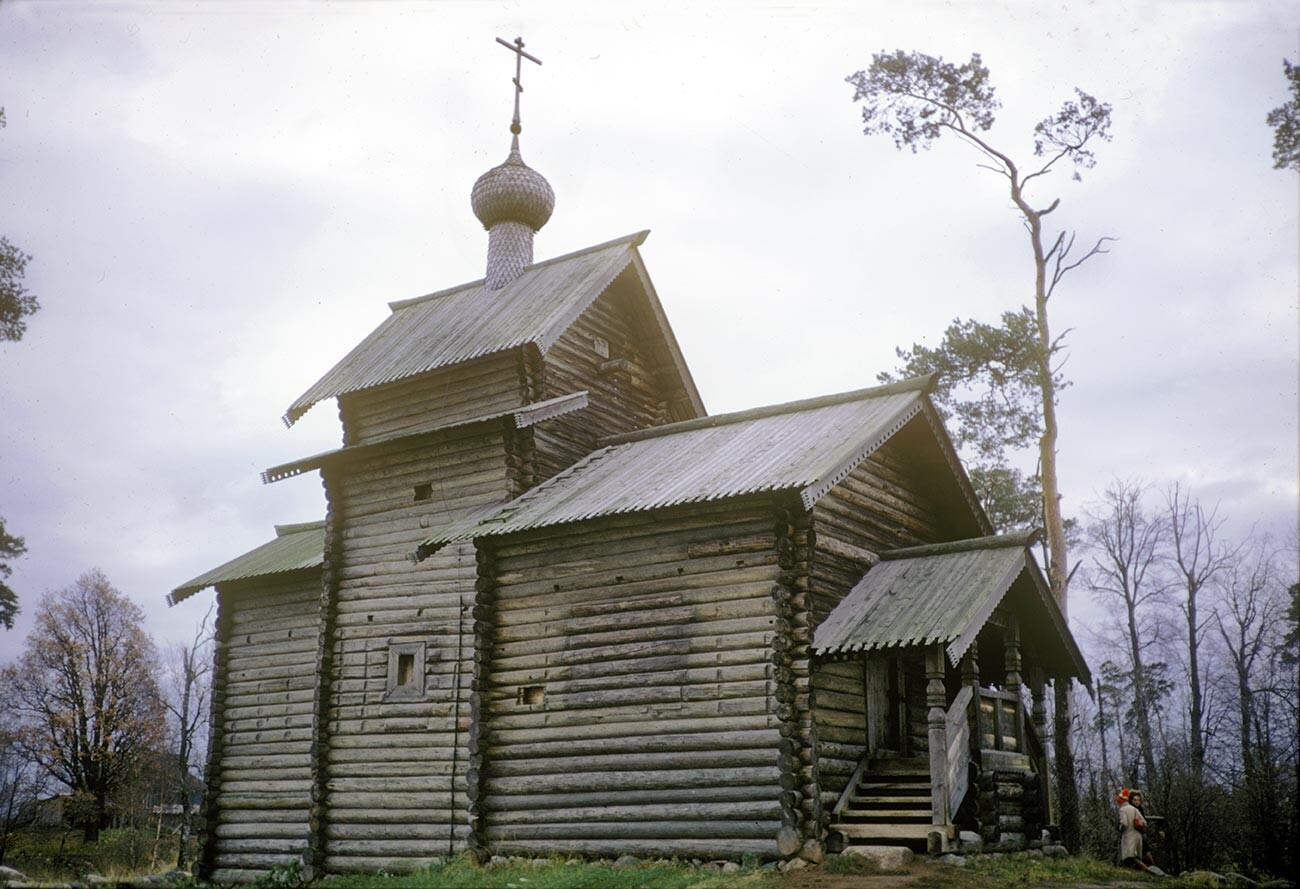 Vitoslavlitsy. Church of St. Nicholas from the village of Tukholya. Northwest view. October 21, 1971

The astonishing tower seems to defy gravity as it rises 34 meters in three octagonal tiers over a square base structure that rested on a foundation of fieldstone. For the most part, the Tikhvin Church consists of closely fitted pine logs joined with notched ends. The logs of the apse, however, were squared and fitted in a tighter dovetail joint. The tower is crowned by a single large cupola supported on a thin cylinder. 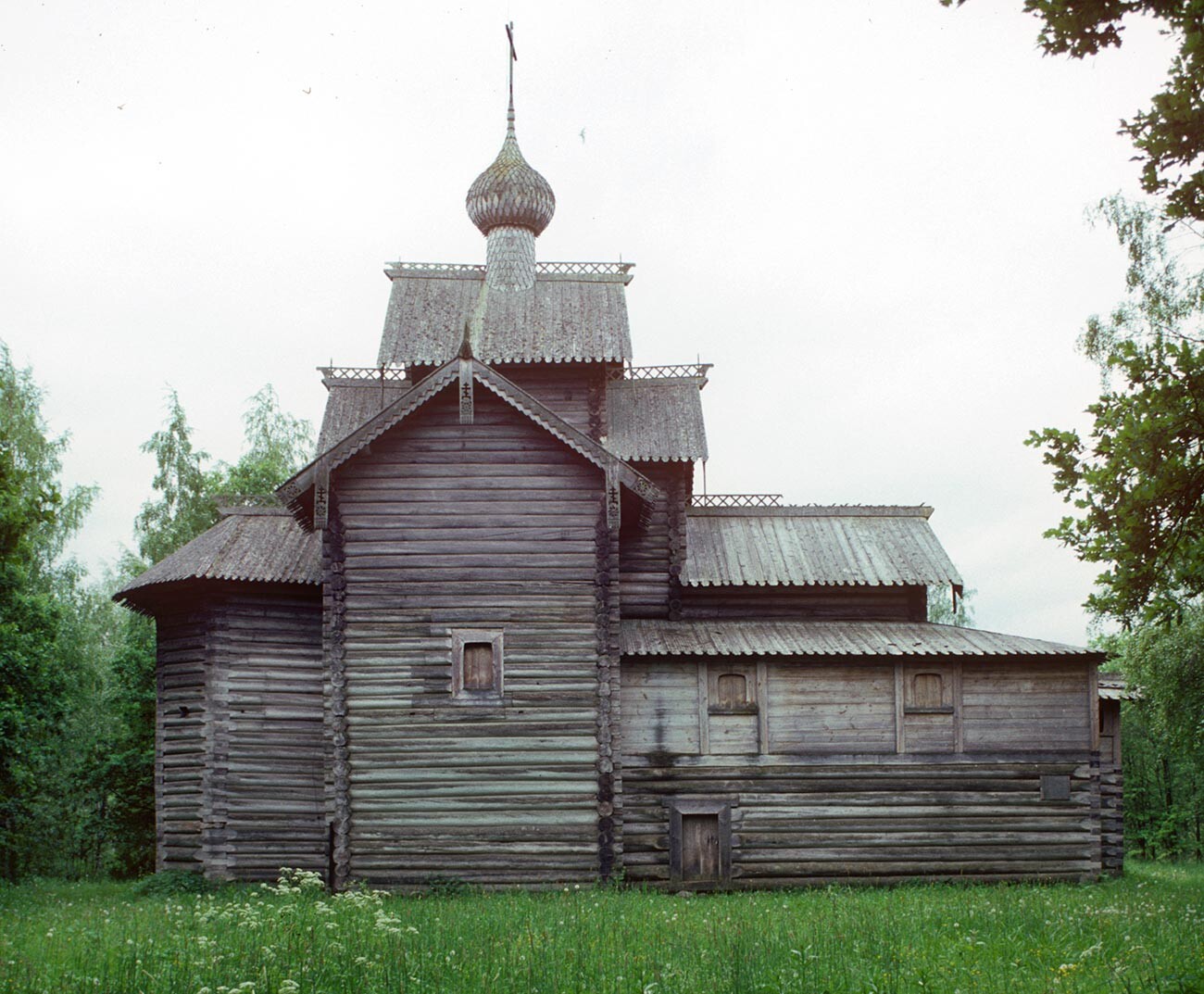 Vitoslavlitsy. Church of St. Nicholas from the village of Myakishevo. North view. June 5, 1993

Although the Church of the Tikhvin Icon is the most dramatic surviving expression of an octagonal log tower, there is another other notable example of a tiered shrine among the wooden churches gathered at the ‘Vitoslavlitsy’ outdoor park-museum near the city of Novgorod the Great. Founded no later than the mid-9th century, Novgorod was one of the defining centers of medieval Russian culture and commerce, with the great Cathedral of St. Sophia built in the mid-11th century. 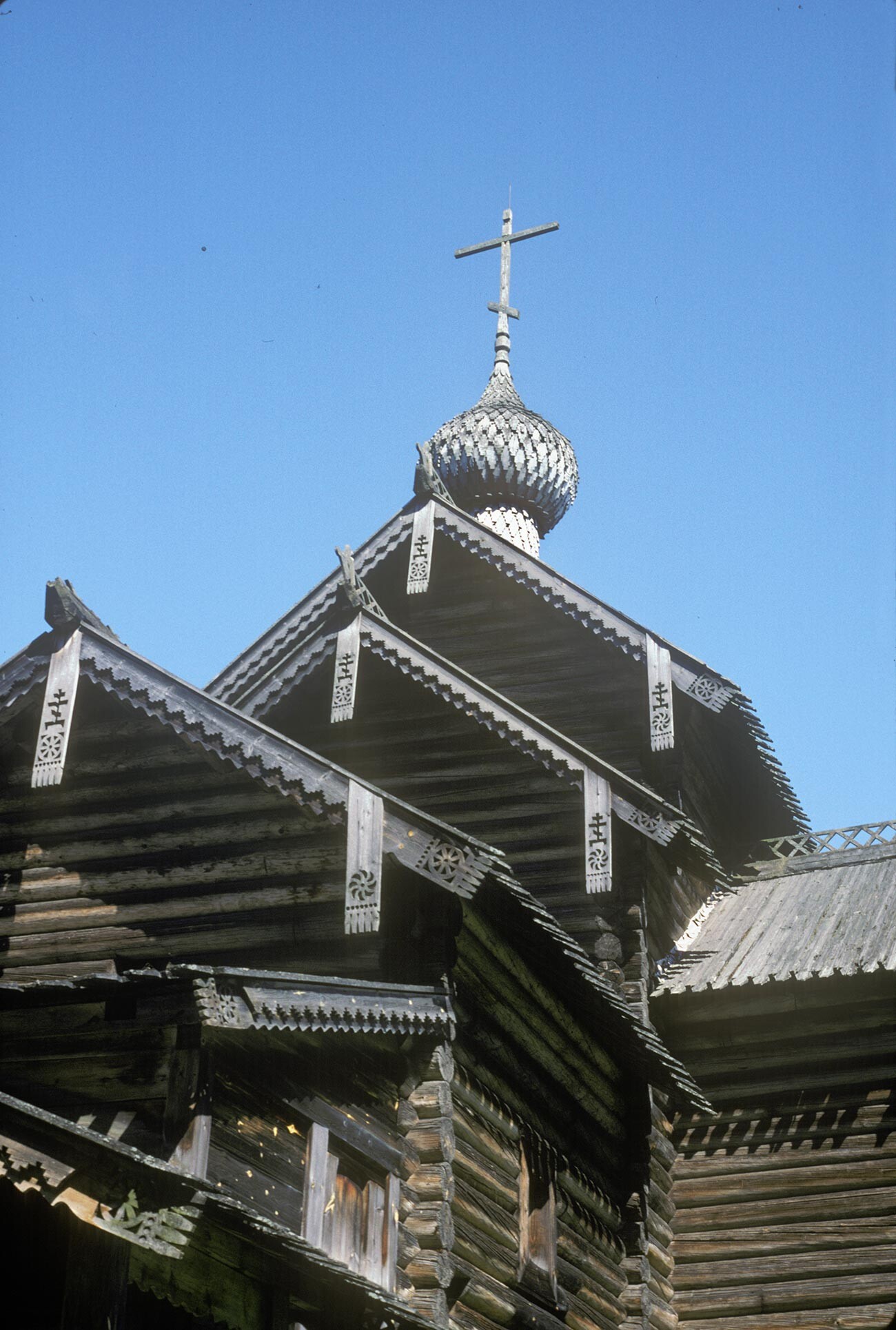 Vitoslavlitsy. Church of St. Nicholas from the village of Myakishevo. West view with carved endboard decorations. May 19, 1995

Set within an old estate surrounded by birch and pine groves, Vitoslavlitsy reveals the additional component of traditional folk culture. One of Russia’s most popular outdoor museums, Vitoslavlitsy’s impressive array of structures ranges from small chapels to large churches, as well as houses with displays of period furniture and traditional crafts. 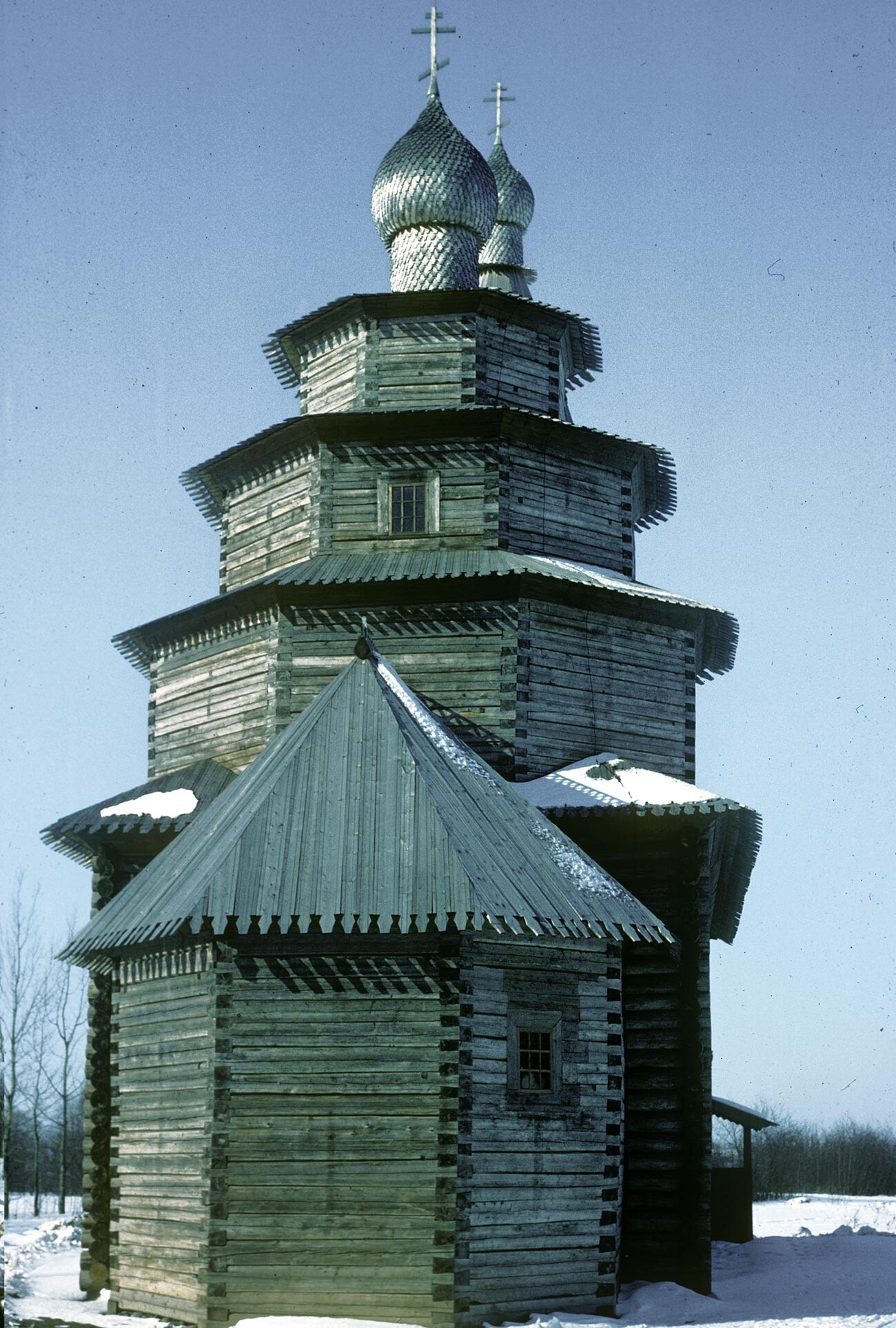 Indeed, Novgorod itself was built primarily of wood until the 20th century, despite its renowned masonry churches and cathedrals from the 11th to the 19th centuries. Medieval chronicles contain sparse references to large wooden churches in Novgorod, such as the town’s earliest shrine dedicated to Saint Sophia, apparently an oak structure dating to the late 10th century with thirteen “tops” or cupolas.

From extensive archaeological and historical data, it is evident that wood was used for almost every type of structure in Novgorod. By virtue of their settlement of a vast forested zone, Russians were fully aware of the strengths of wood, which they applied to the construction of churches, dwellings and fortifications. 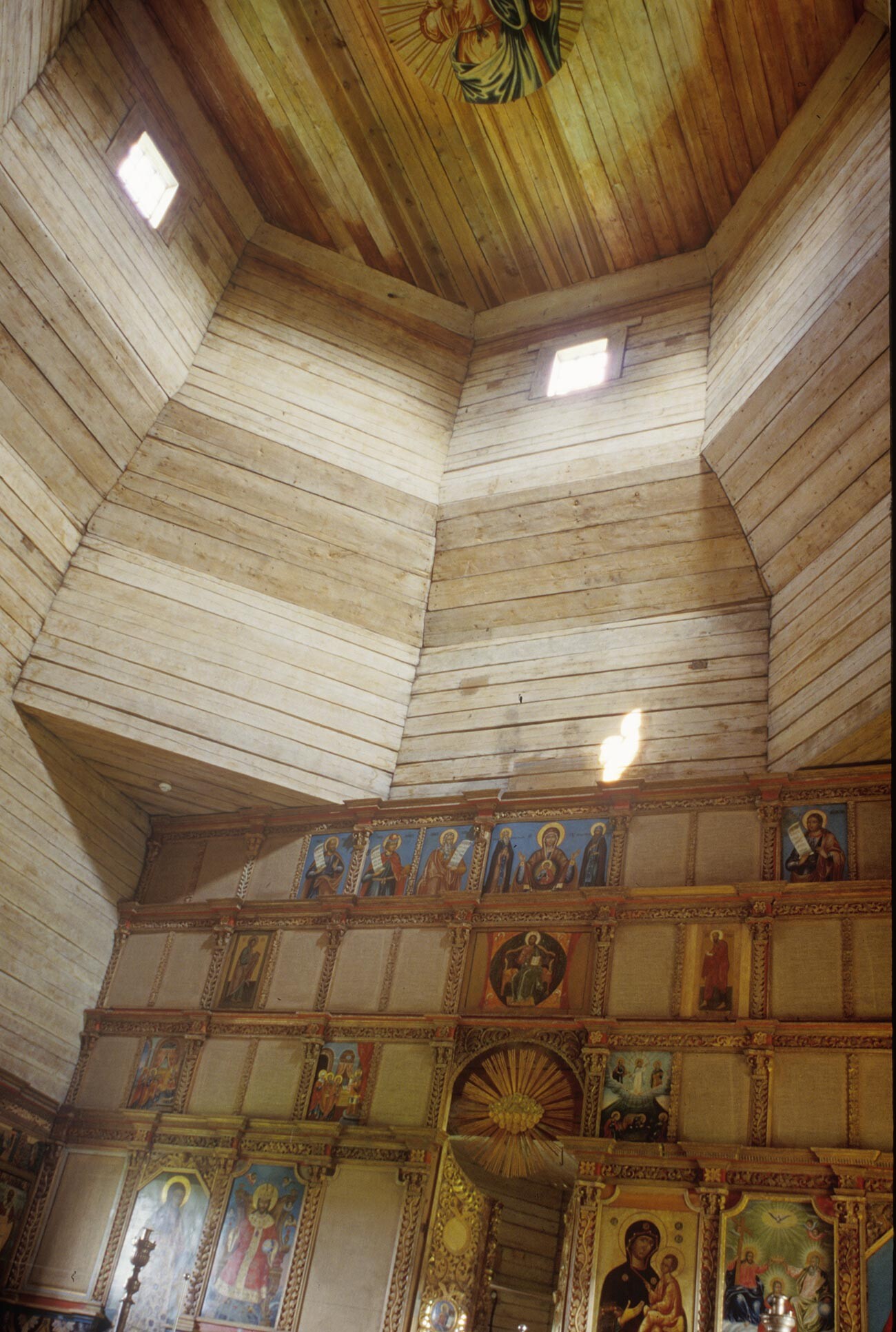 Vitoslavlitsy. Church of St. Nicholas from the village of Vysoky Ostrov. Interior, with icon screen & view of tower with plank ceiling. July 5, 1995

The Vitoslavlitsy park serves as an encyclopedia of the variety of Russian wooden churches. Treated more carefully than houses, these structures could last for centuries, if rotting logs were promptly replaced and the roof maintained. Among the museum’s array of log churches, the earliest examples have been dated to the 16th century.

The more elaborate churches had galleries on raised porches and were decorated with carved end boards that protected the roof beams. Similar decorative elements can be found on the larger peasant houses.

The simplest type of wooden church, illustrated at Vitoslavlitsy by the Church of the Dormition from the village of Nikulino (1599), resembles the peasant house, with its pitched roof and rectangular components. The plan is linear along an east-west axis, with the main part for worship and a smaller part in the west, which served as a vestibule. An apse containing the altar projected on the east, as required in Russian Orthodox practice. Some examples had a bell tower attached at the west of the vestibule. 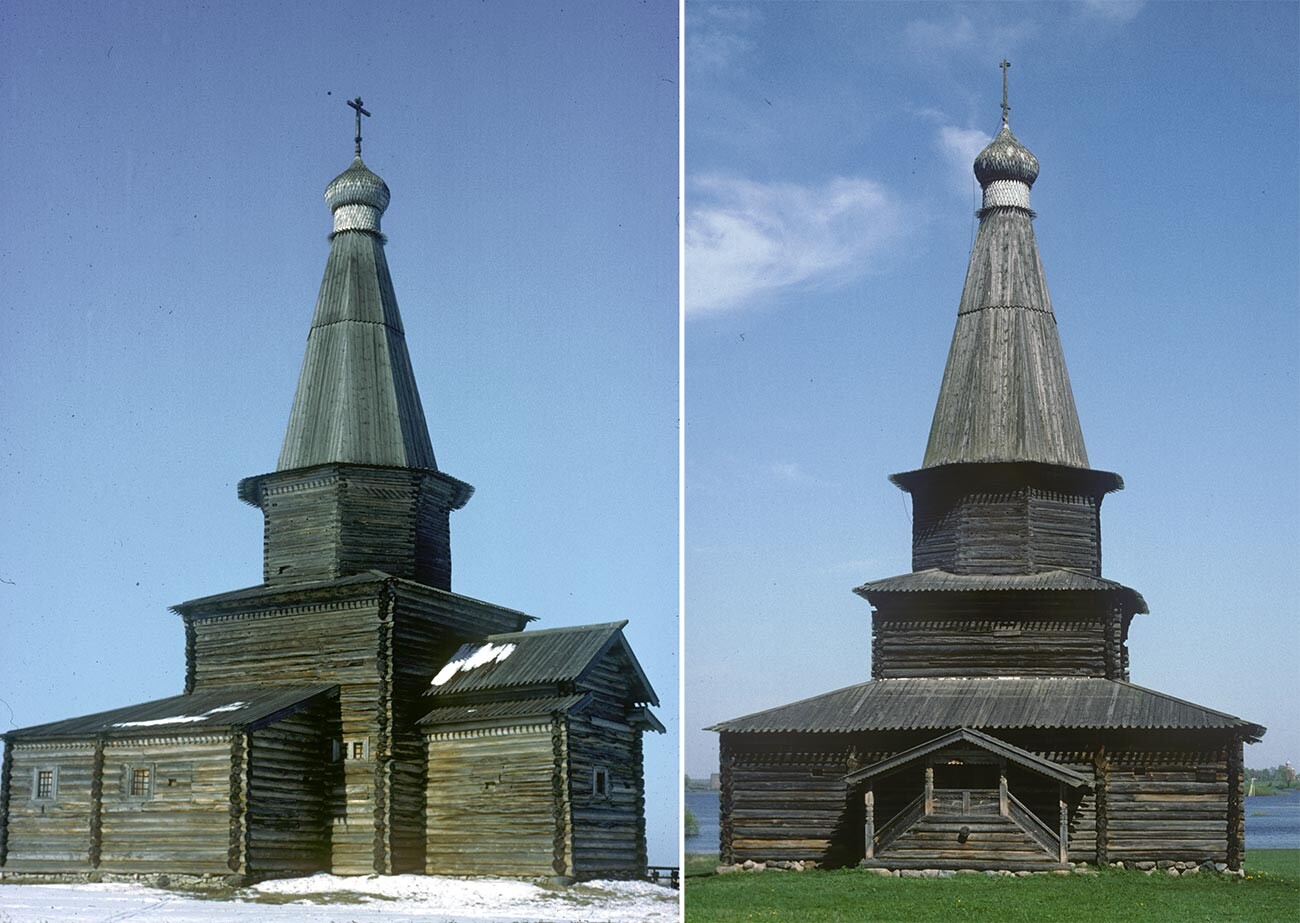 This linear plan could be elaborated by a roof with two planes above the main structure to better protect the walls from moisture, as in the Church of St. Nicholas at Tukholia (17th century.) Still more complex examples display multiple gables with decorative carving, such as the Church of St. Nicholas at Miakishevo, built in the latter half of the 17th century). Designed to shed snow, their steeply pitched roofs are also a delight to the eye.

The most daring structural approach was adopted in the design of tower churches, such as the Tikhvin Church at Torzhok. Their core structure ascends in a series of octagonal tiers over the main part of the building, an approach superbly illustrated by the Church of St. Nicholas at Vysoky Ostrov (1757). 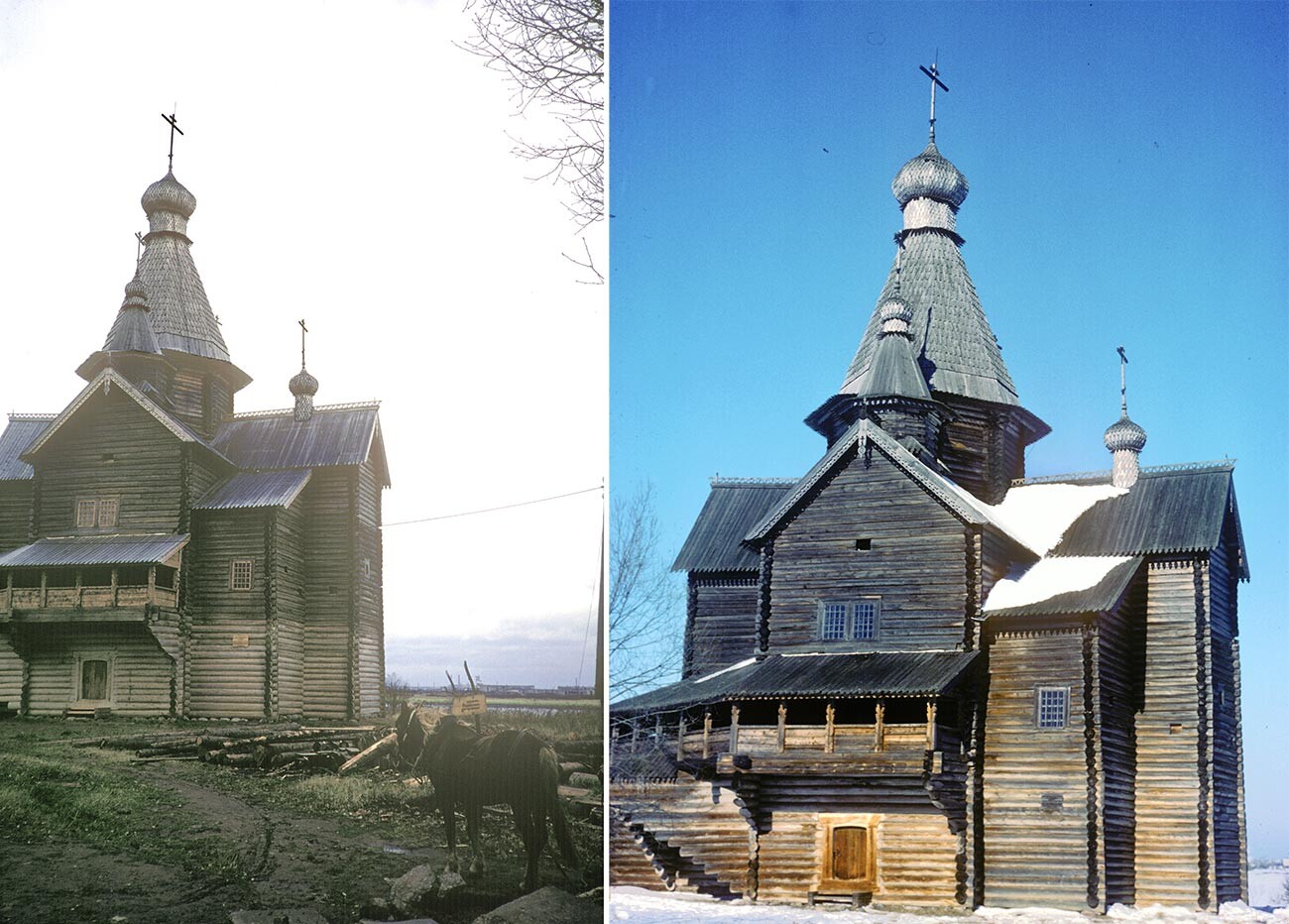 Vitoslavlitsy. Church of the Nativity of the Virgin, from the village of Peredki. Left: Southeast view. Unique photograph at the final stage of reconstruction, with replaced logs of lighter color (October 21, 1971). Right: South view. Replaced logs still visible from lighter color (March 14, 1980)

In contrast to the Torzhok church, with its small vestibule, the tower of the St. Nicholas Church is set at the east end of a larger “refectory” vestibule, which creates a linear plan. When seen from the east, the design suggests the form of a pagoda.

A variant approach to the vertical form is demonstrated in the “tent” type of wooden church, so named for the shape of its tall central tower (shatyor in Russian). Here the linear arrangement is replaced by a centralized plan, whose square base supports an octahedron that is capped with a soaring eight-sided “tent” tower, illustrated in the Church of the Dormition at Kuritsko (1595). 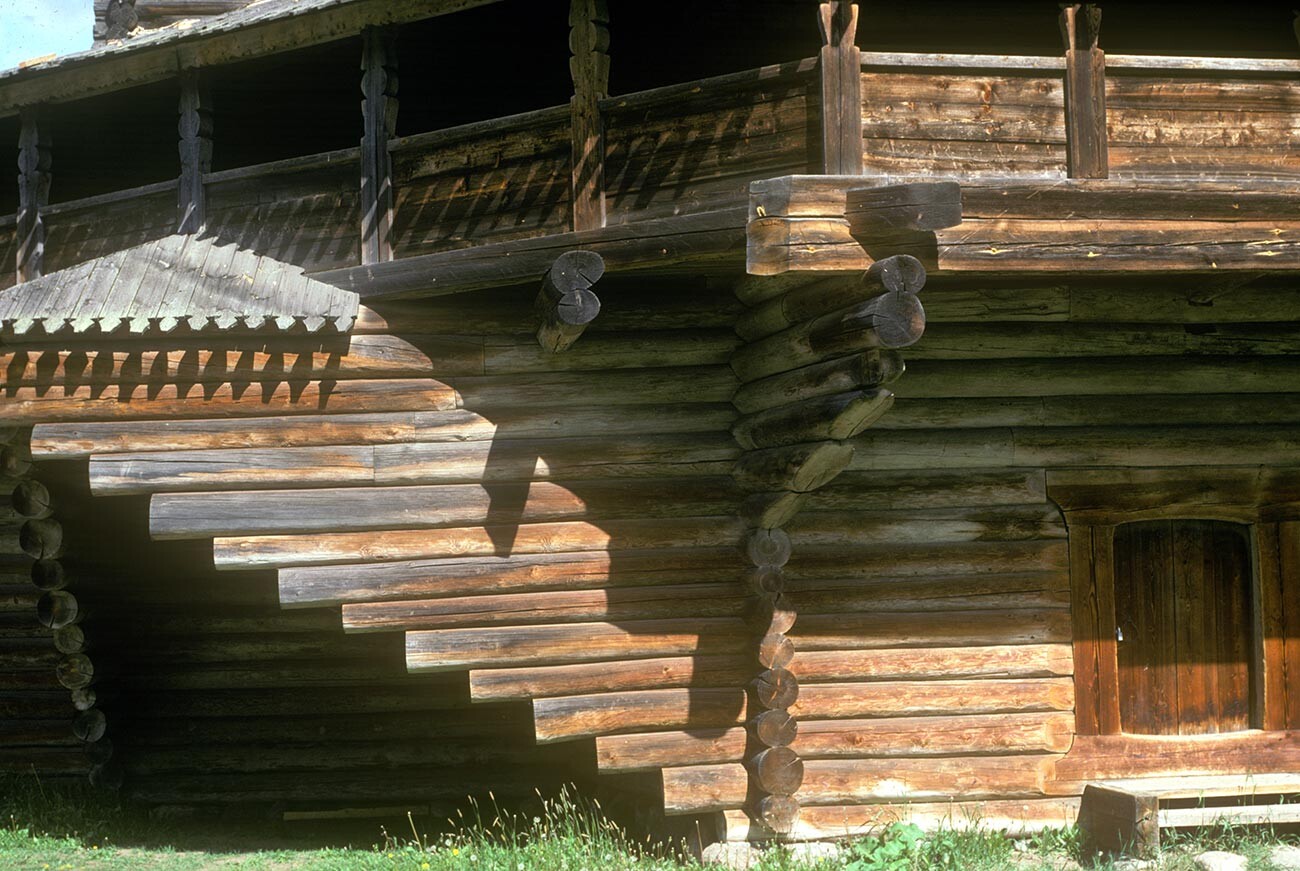 Vitoslavlitsy. Church of the Nativity of the Virgin, from the village of Peredki. View of southwest corner with logs cantilevered to support the gallery. May 20, 1990

More complex variations of the “tent” tower show a cruciform plan with flanking domes, as illustrated in the Church of the Nativity of the Virgin at Peredki, originally a monastic structure first mentioned in 1539. The Peredki church (approximately 30 meters in height) has a gallery elevated above the highest snow drifts by a system of projecting logs - a design that shows how seamlessly aesthetics and function were combined in log churches.

I was fortunate to have been able to photograph this extraordinary monument of folk architecture as it was being re-erected at Vitoslavlitsy in 1971. At that time, I was a visiting graduate student at Leningrad State University, which arranged the trip to Novgorod as part of a cultural enrichment program. Little did I know how important these few photographs would become for my later documentary project in Russia. 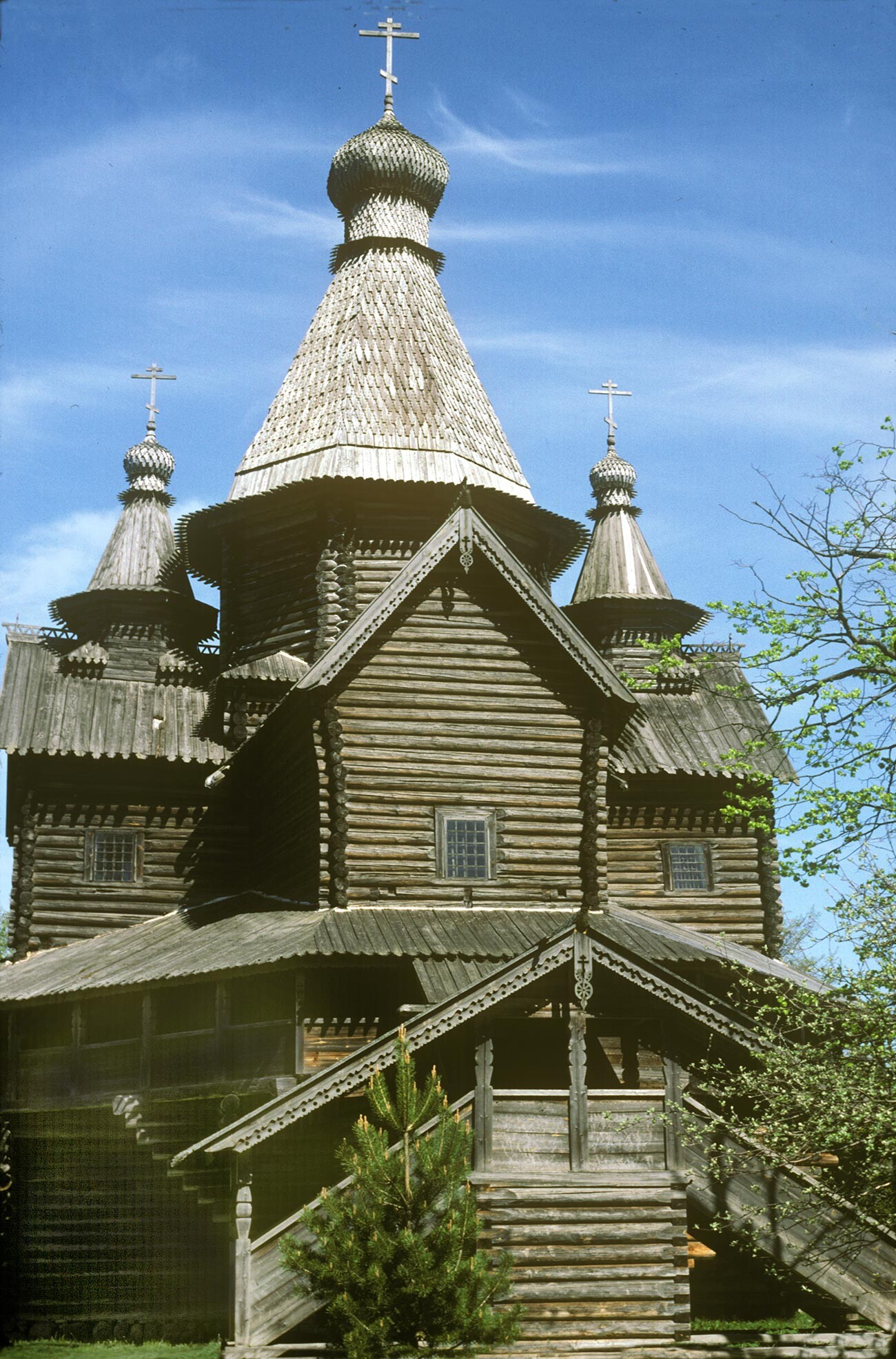 Vitoslavlitsy. Church of the Nativity of the Virgin, from the village of Peredki. West view with raised entry & gallery. May 19, 1995

The Vitoslavlitsy park also has examples of log houses and barns. Modest in size, these dwellings (known in Russian as izba) combine artistry of design with economy of function. The center of the peasant log house was the large masonry stove used not only for cooking, but also for heating the main living space during the long winters.

In the central part of Russia, the house typically formed the primary component of a yard enclosed by a solid fence and containing sheds for animals and farm implements. In the more severe climate of the far north, these units were combined into a single, self-sufficient structure. Vitoslavlitsy displays both types. 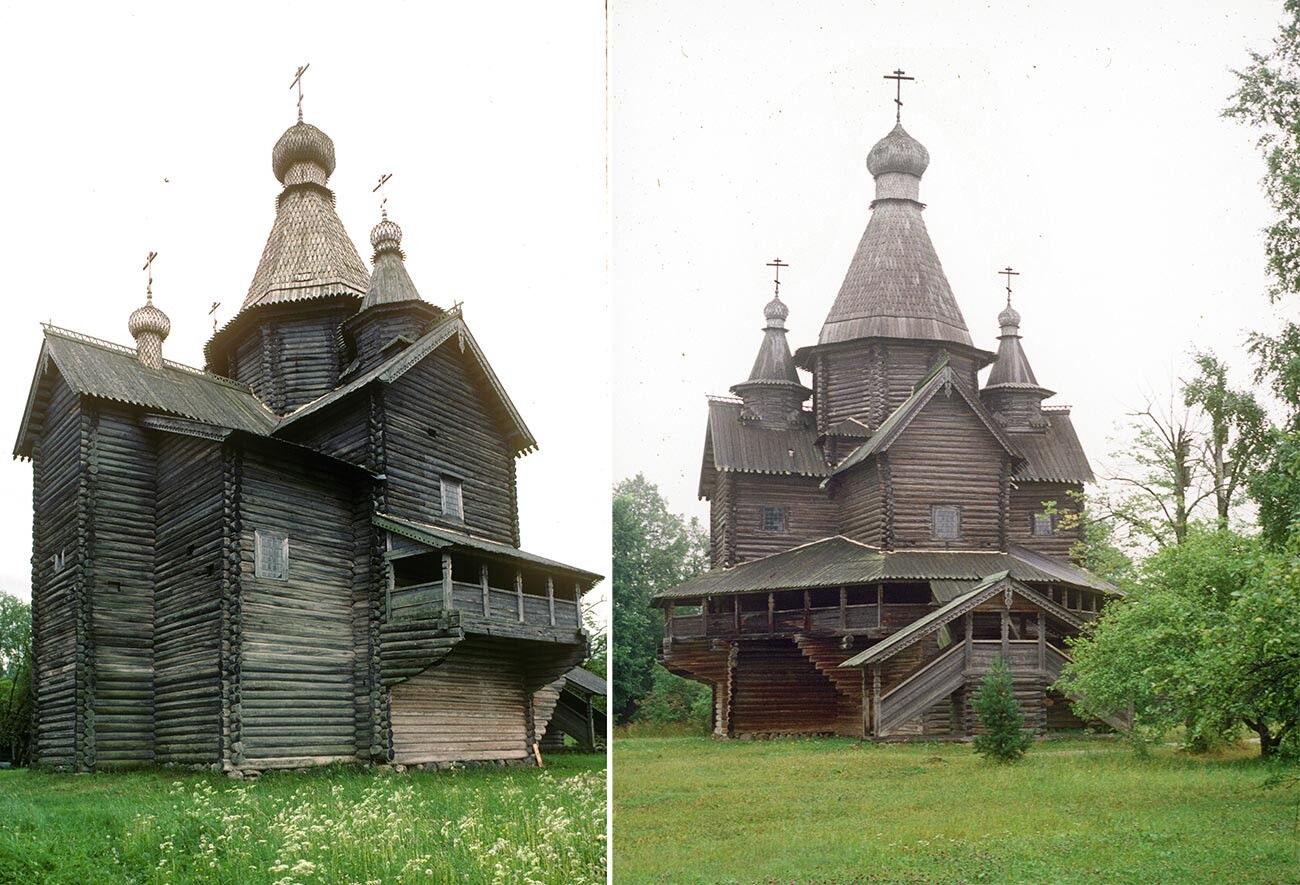 Vitoslavlitsy. Church of the Nativity of the Virgin, from the village of Peredki. Northeast view with apse (on left) containing the main altar (June 5, 1993) and the west view (August 11, 1994)

Whatever the form of wooden structures, the construction methods utilized generations of skill and knowledge of the properties of wood. The logs were traditionally cut in late fall after the final ring of the tree - usually pine, with some fir - had hardened and they were left on the ground until the beginning of building season in late spring. The logs were then taken to the construction site, where they were trimmed, notched and, in some cases, planed.

Although construction techniques have evolved in the modern era, wood is still used for houses and churches throughout Russia. The Vitoslavlitsy museum plays an essential role in preserving the roots of these ancient traditions. 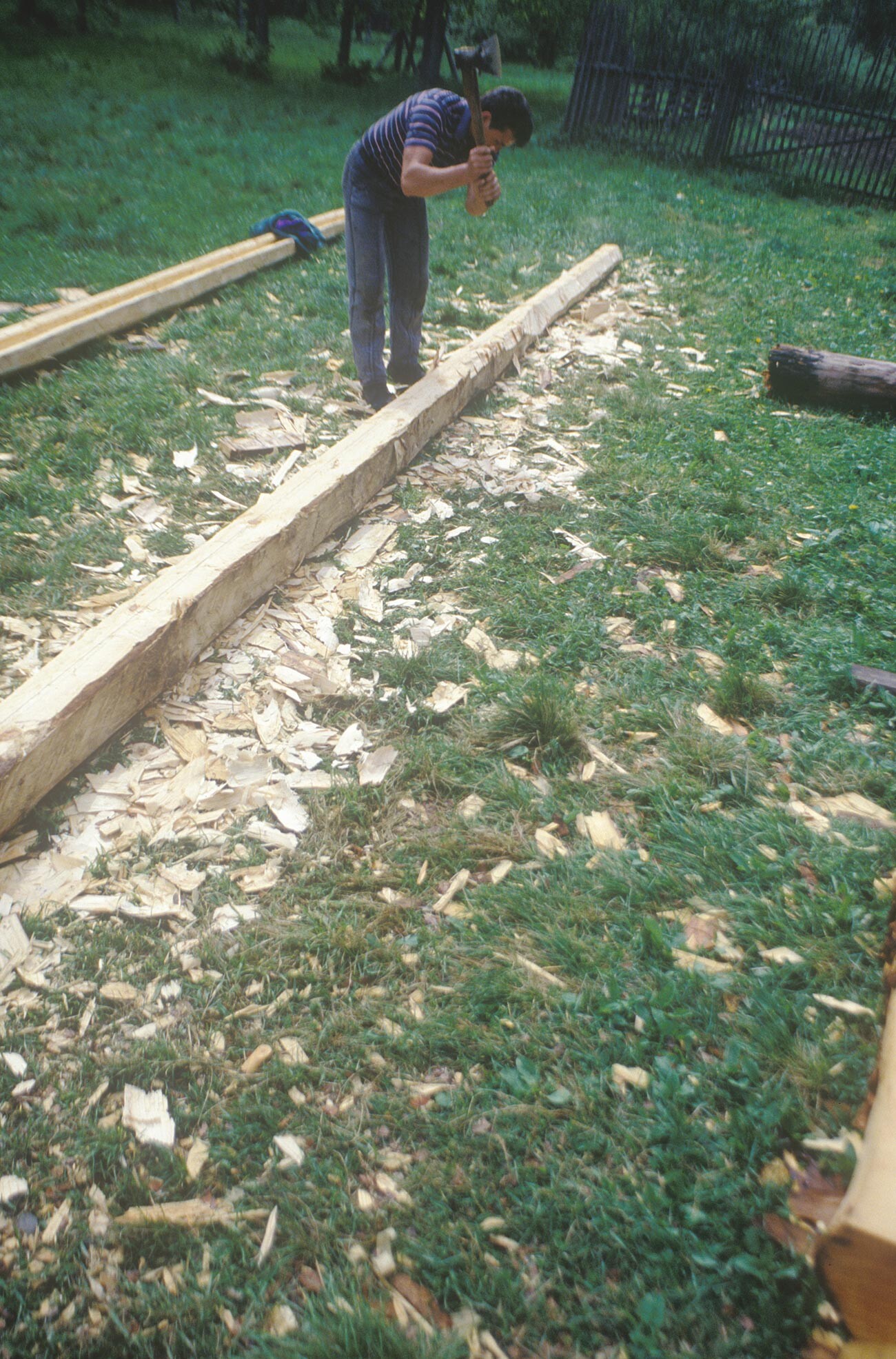 Vitoslavlitsy. Master carpenter at work on pine log. At his back is a gutter hewn by axe & adze from a single log. May 27, 1996