Pathways to the White Sea: From a soaring forest shrine to the Stroganovs 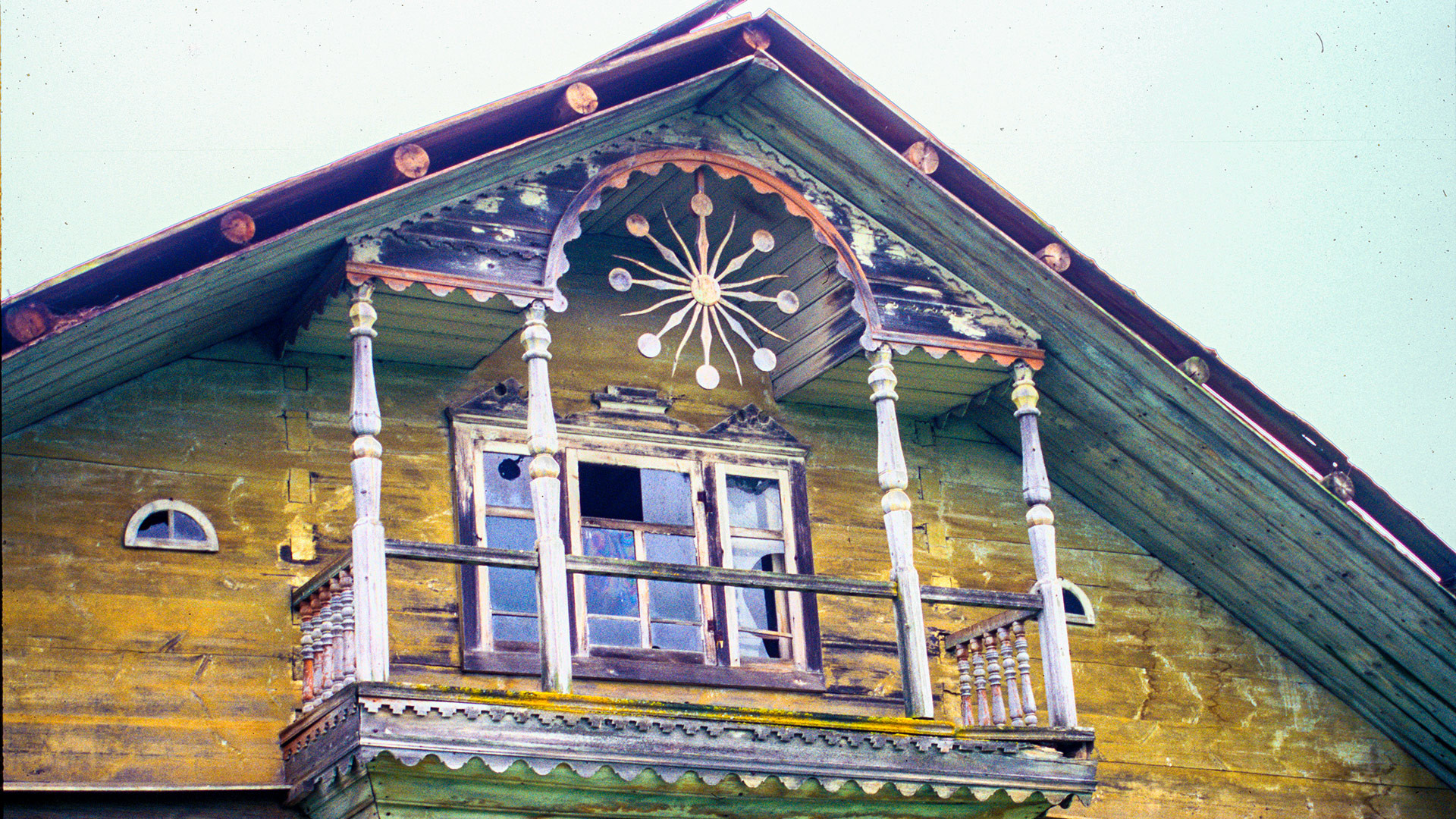 In the summer of 1916, as the Great War raged in Europe, Russian chemist and photographer Sergey Prokudin-Gorsky took his last major expedition. His special passage at such difficult times was thanks to a commission from the government to photograph construction of a railroad to the new port of Murman (now Murmansk), which had been founded at the northwest corner of the Kola Peninsula to receive war supplies from the Western allies. 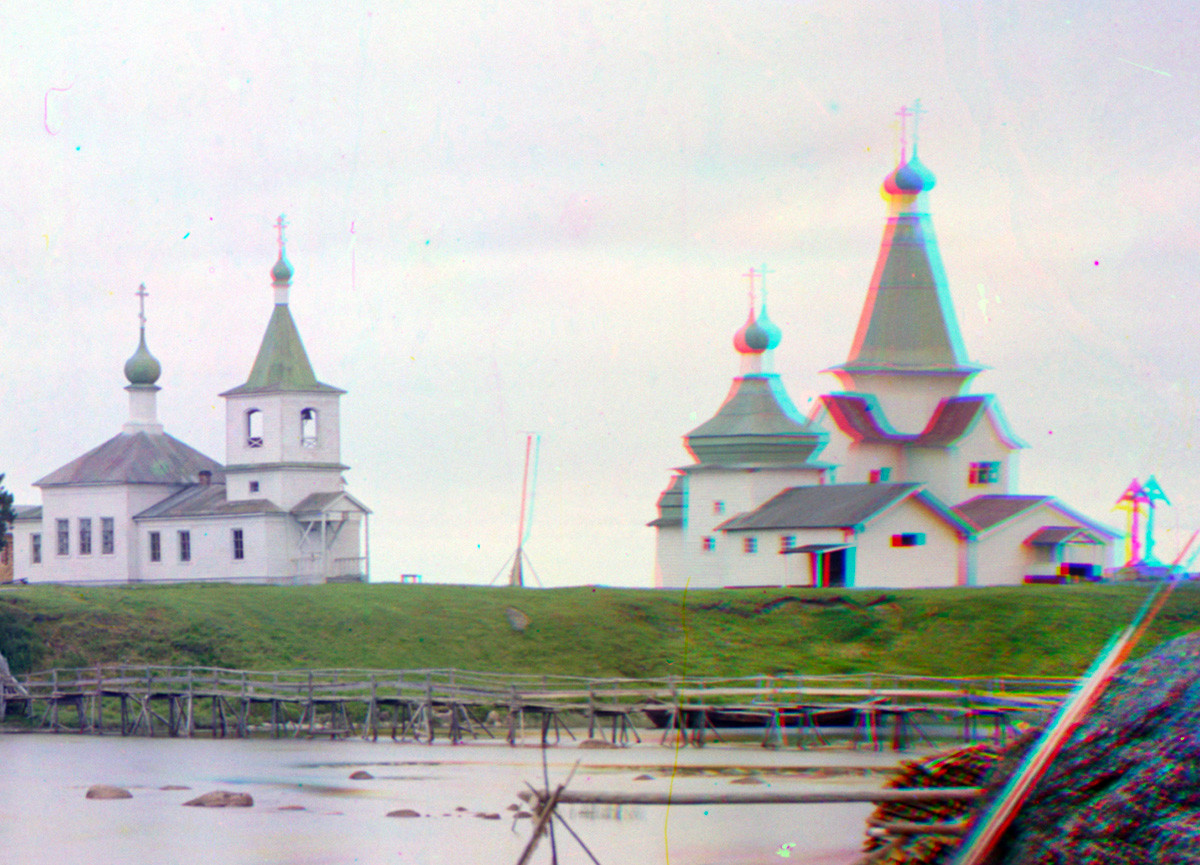 Most of the sites Prokudin-Gorsky photographed on this journey are located in the area now known as the Republic of Karelia. With its ample forests, Karelia was rich in monuments of traditional wooden architecture. Prokudin-Gorsky photographed villages along or near the new railroad, including the coastal village of Shuyeretskoye (also known as Shuya), located near the mouth of the Shuya River on the White Sea some 19 miles south of the ancient town of Kem.  Prokudin-Gorsky’s evocative photograph taken across the Shuya River shows an ensemble of three wooden churches, one of which had a bell tower. 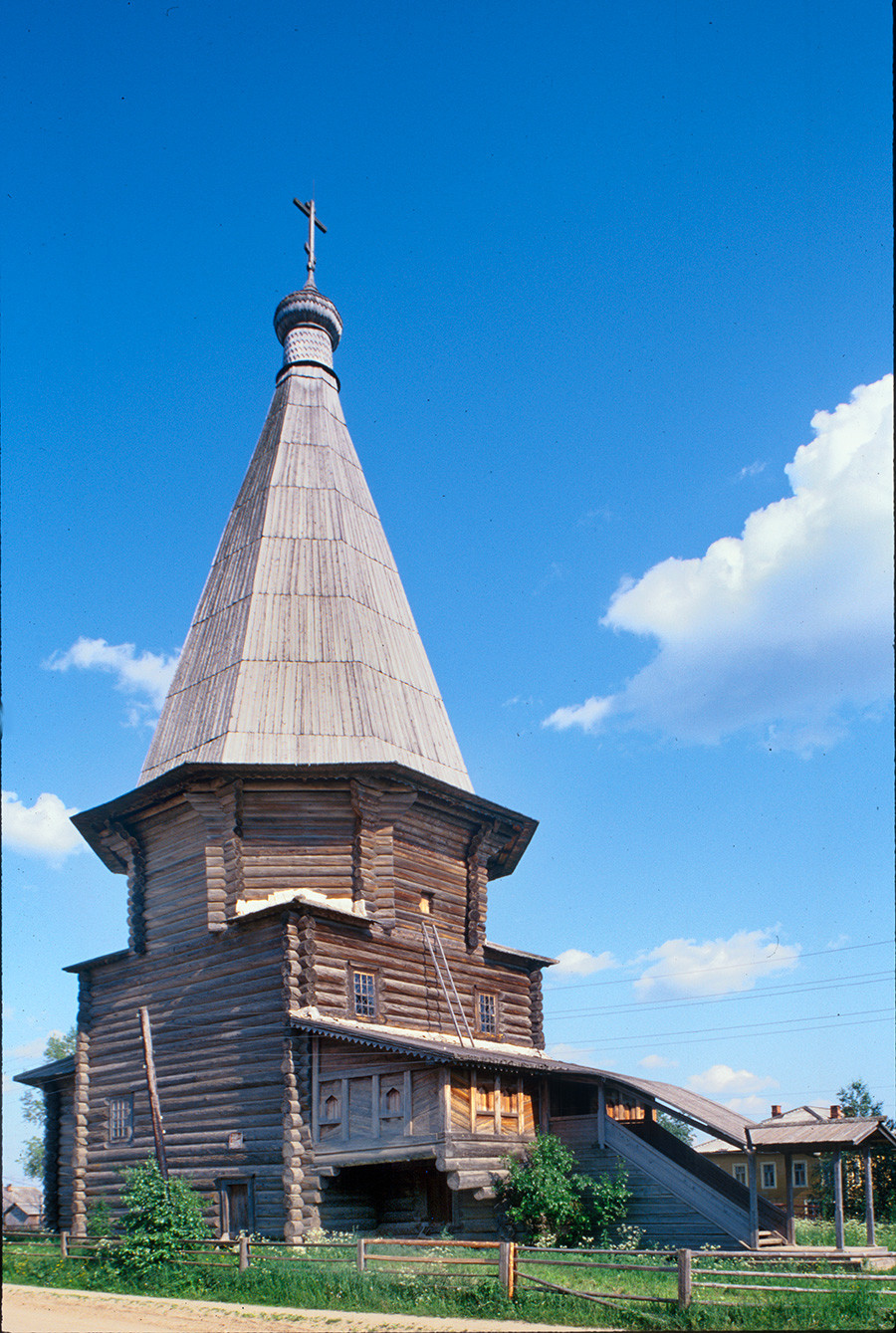 The dominant feature of the Shuya ensemble photographed by Prokudin-Gorsky in 1916 was the Church of St. Nicholas, capped with its distinctively northern tall tower known as a “tent” (shatyor). Provisionally dated to the turn of the 17th century, the St. Nicholas Church was clad in plank siding in the late 19th century, as were the adjacent churches. None of these monuments has survived. Closed and vandalized during the early Soviet period, the churches were known to have been in a deplorable state after the war. In 1947, all three were destroyed, apparently from fire ignited by a lightning strike. 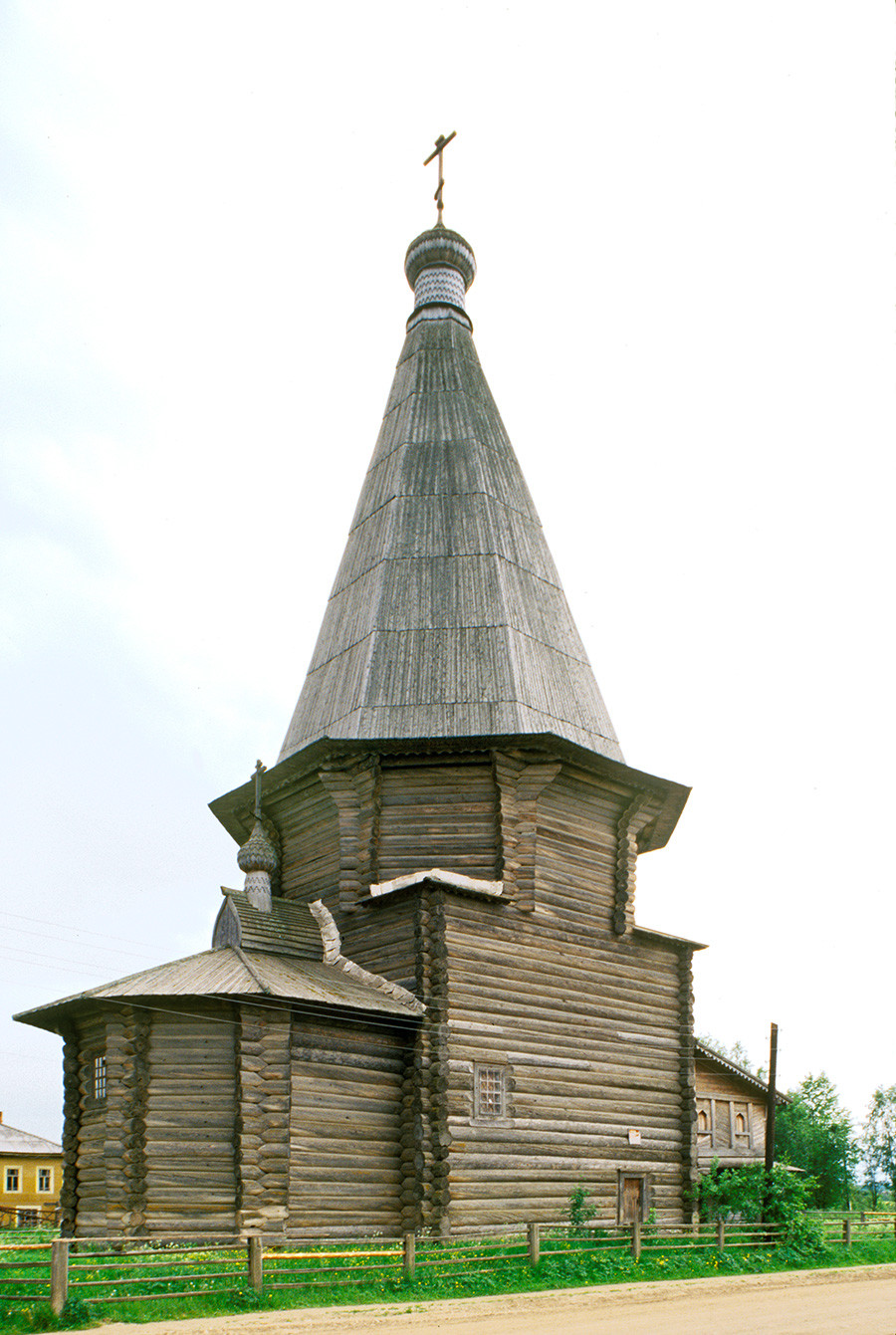 Although the Church of St. Nicholas no longer exists, there are similar “tent” structures that still stand throughout the White Sea region, including the area along the Northern Dvina River. From its origins at the town of Veliky Ustyug to its mouth near the port of Arkhangelsk, the Northern Dvina is not one of the world’s major rivers in terms of size. However, the Dvina’s importance for Russia is exceptional.

Link to the west 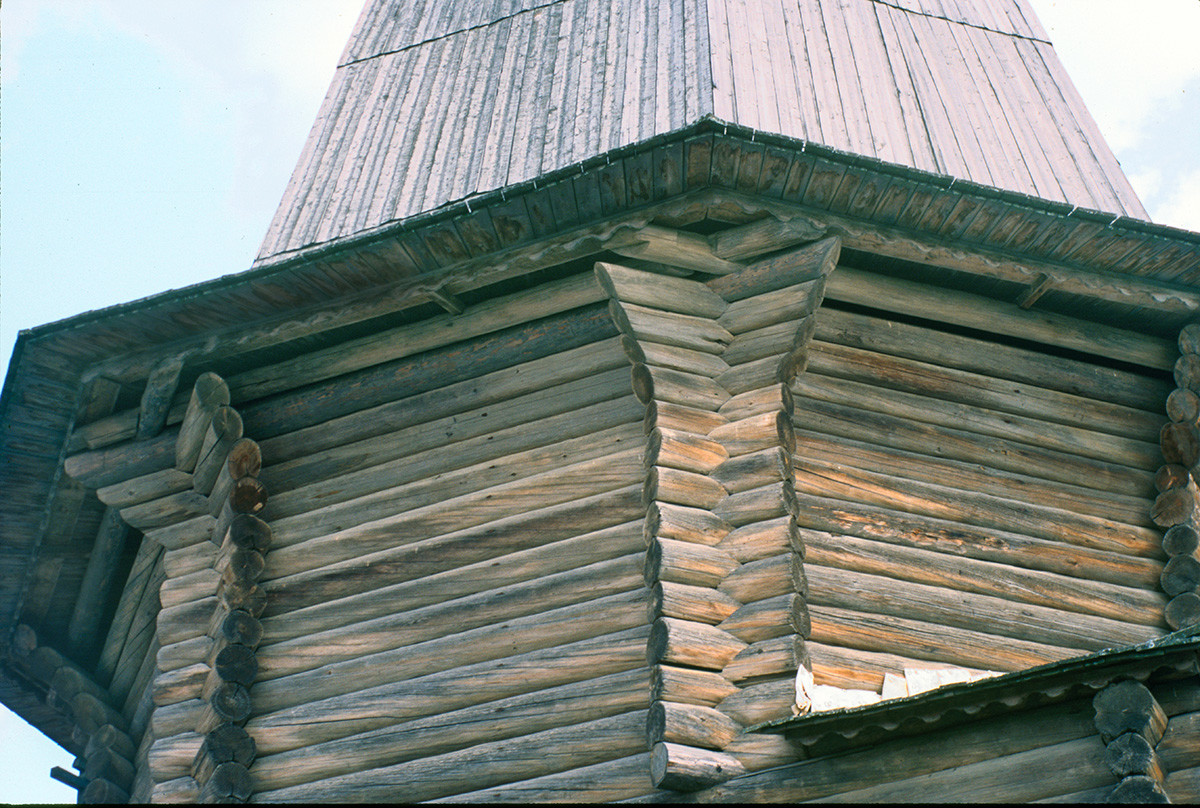 From the 16th to the beginning of the 18th century, this river, which empties into the White Sea, was Russia’s main outlet to the west, to Britain and Holland. During this period, the White Sea area was linked by rivers, lakes, and the sea into one of the most powerful trading networks in Russia. The Dvina River basin, which includes the Sukhona and Vychegda Rivers, served as the major component in this aquatic system. Through the vast territory of the north – from Siberia to the Kola peninsula — furs, forest products, fish and salt moved along it. 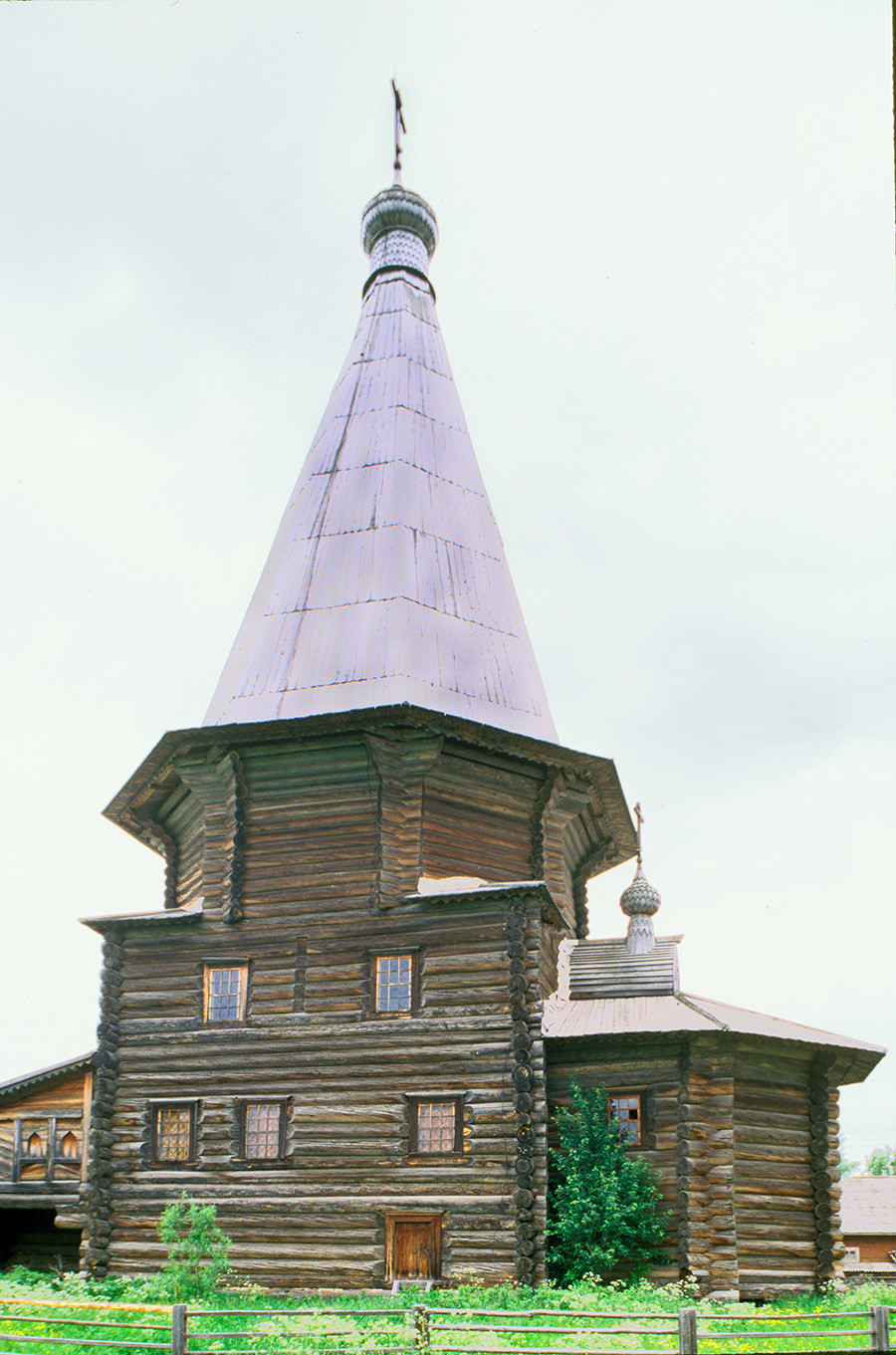 With a length of 460 miles, the Northern Dvina is the longest river in Northern Europe. Much has been written about the river itself, yet few are aware of the cultural heritage represented by the forgotten churches and houses along its banks. One particularly interesting area extends inland from the Dvina's right bank near its confluence with the Vychegda River, a tributary that stretches some 680 miles northeast toward the Ural Mountains and Siberia. This corner of the Dvina not only had abundant salt production, but also was known for its metal works. It was here that the Stroganov merchant dynasty began its major role in Russian history.

A defining monument to God 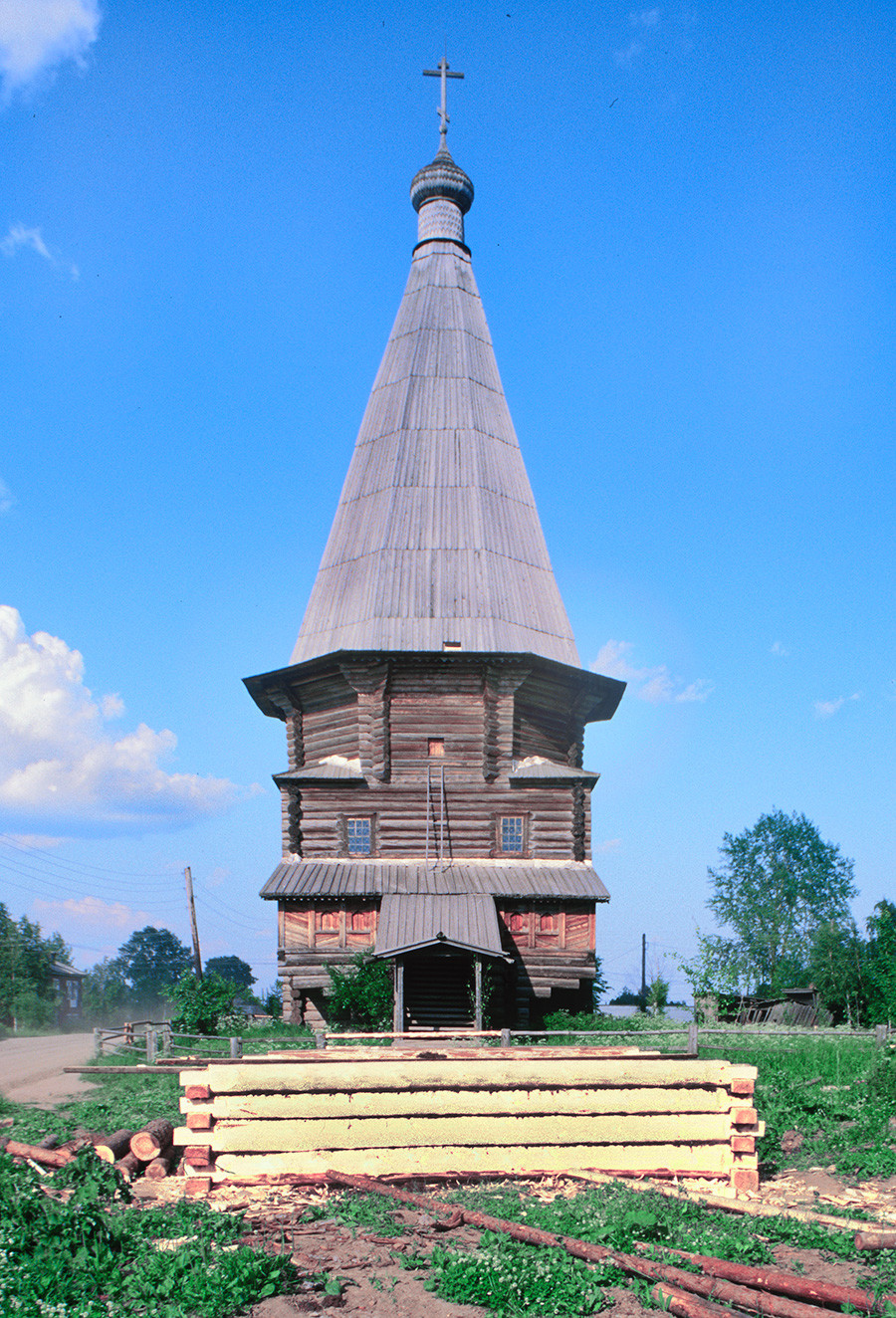 Among the region's notable historic villages is Verkhnyaya (Upper) Uftyuga, located on a dirt road along the small, winding Uftyuga River some 28 miles inland from the Dvina. The village contains one of the defining wooden monuments of the North, the Church of St. Dimitry (Demetrius of Thessaloniki), erected in 1784 and carefully restored in the late 1980s.

The most striking feature of the St. Dmitry Church is its "tent" tower, which comprises over half the church’s 130-foot height. The eight-sided tower rises above a low octagonal log base, which in turn rests on the large cuboid basic structure. The tower culminates in a cupola covered by wooden shingles. On the east side is an extension for the apse (with the main altar) that is crowned with a small gable and cupola. 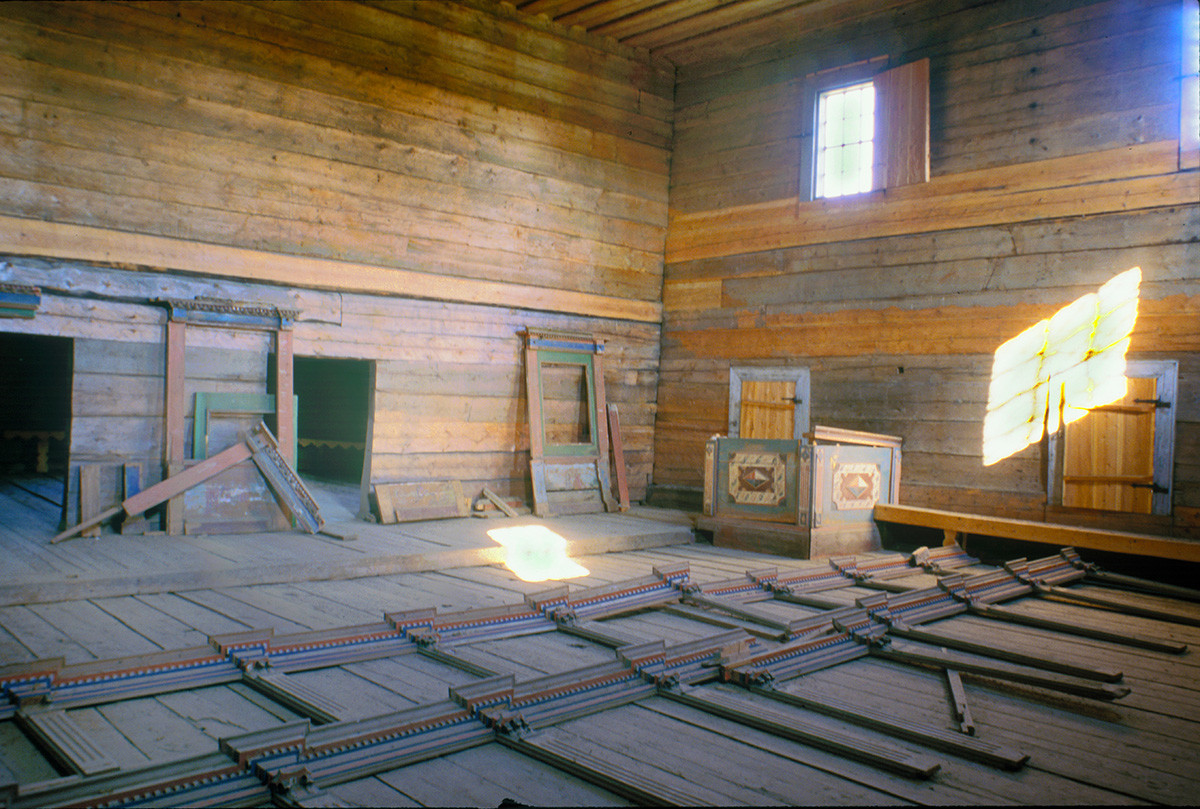 The church is constructed of stout pine logs, tightly fitted and notched at the ends. Just beneath the base of the "tent" tower, the logs are extended in length to support a flare (poval). This extension bolsters the tower and creates a roof overhang (politsa) that protects the lower walls from excessive moisture runoff. The flare design is both functional and at the same time one of the most graceful details of Russian wooden architecture.

The powerful vertical presence of the Church of St. Dmitry is further emphasized by the lack of the usual extension for a vestibule on the west side of the church. In this case, the west façade is fronted by a simple raised gallery from which a covered stairway descends to the ground level.

This elevated approach lifts the main entrance above the snow drifts that accumulate during the long winters. In every season the soaring form of the Church of St. Dmitry served as a beacon throughout the area. 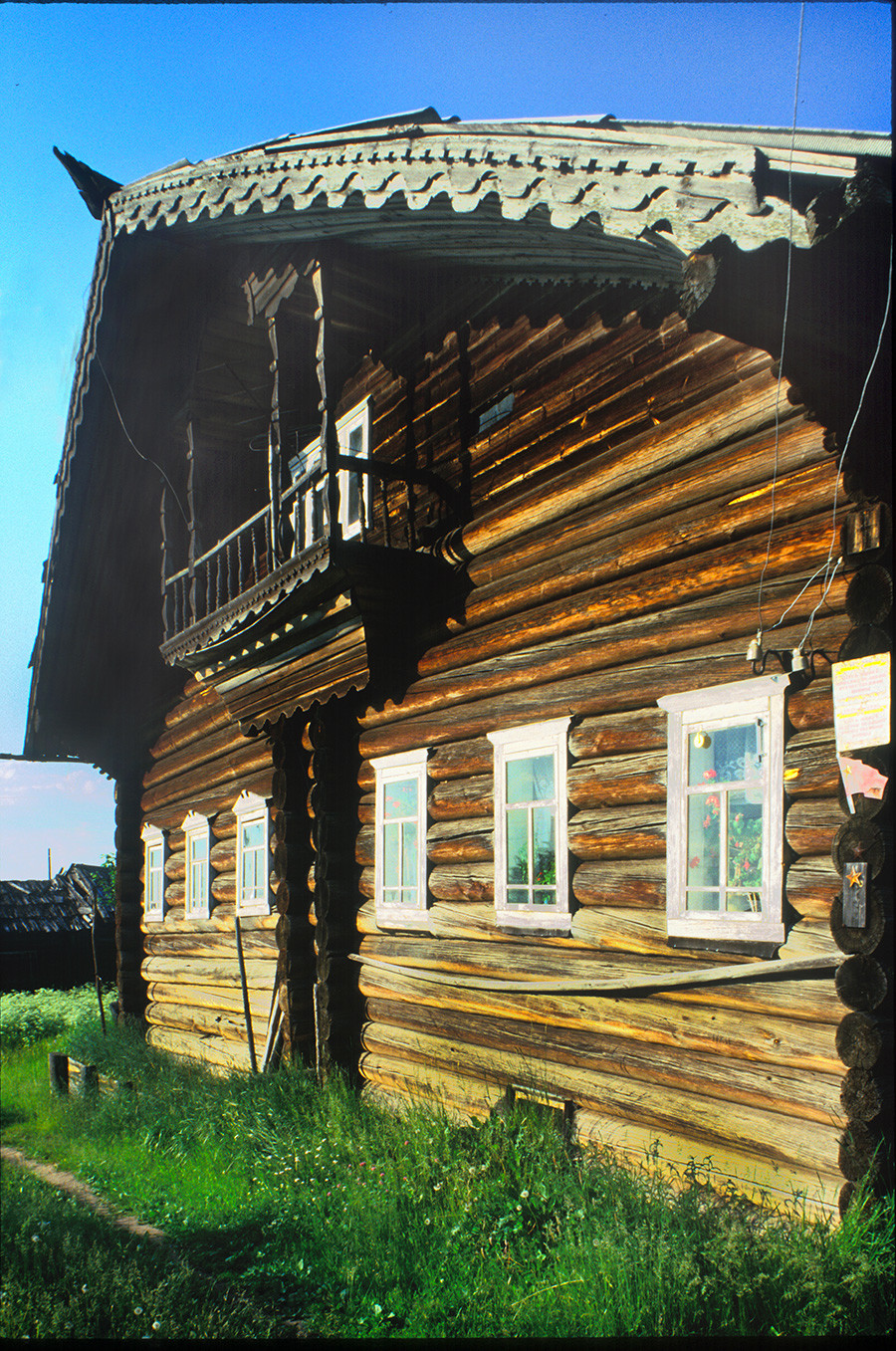 To the south of the Uftyuga River, back country roads (often little more than sandy tracks) wind through the pine forests in the direction of Solvychegodsk. This region between the Uftyuga and Vychegda Rivers has remarkable wooden houses, which even when abandoned, give a sense of the rich folk traditions characteristic of the Russian north. 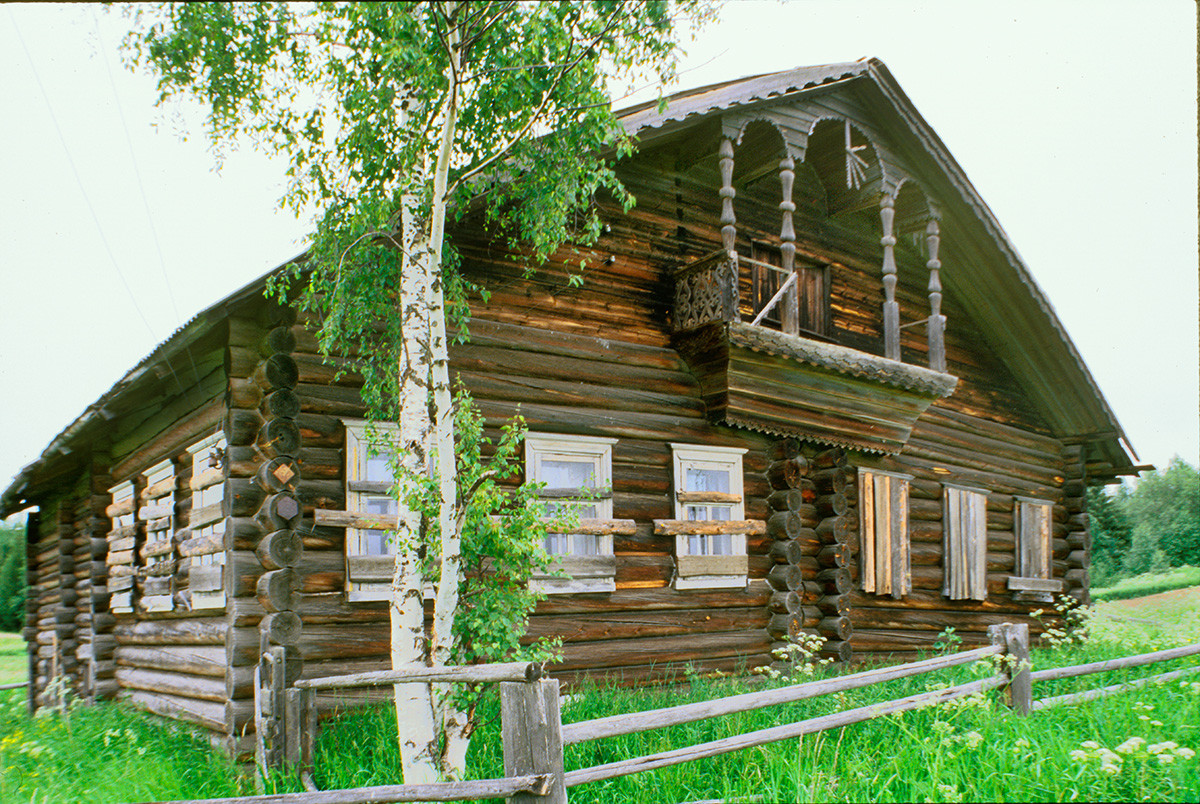 These large domiciles usually have two levels that encompass living quarters in the front and a barn for storage and livestock in the back. All components are under an extended roof. Log houses traditionally have decorative window surrounds (nalichniki) as well as end boards (pricheliny) along the front edges of the roof. 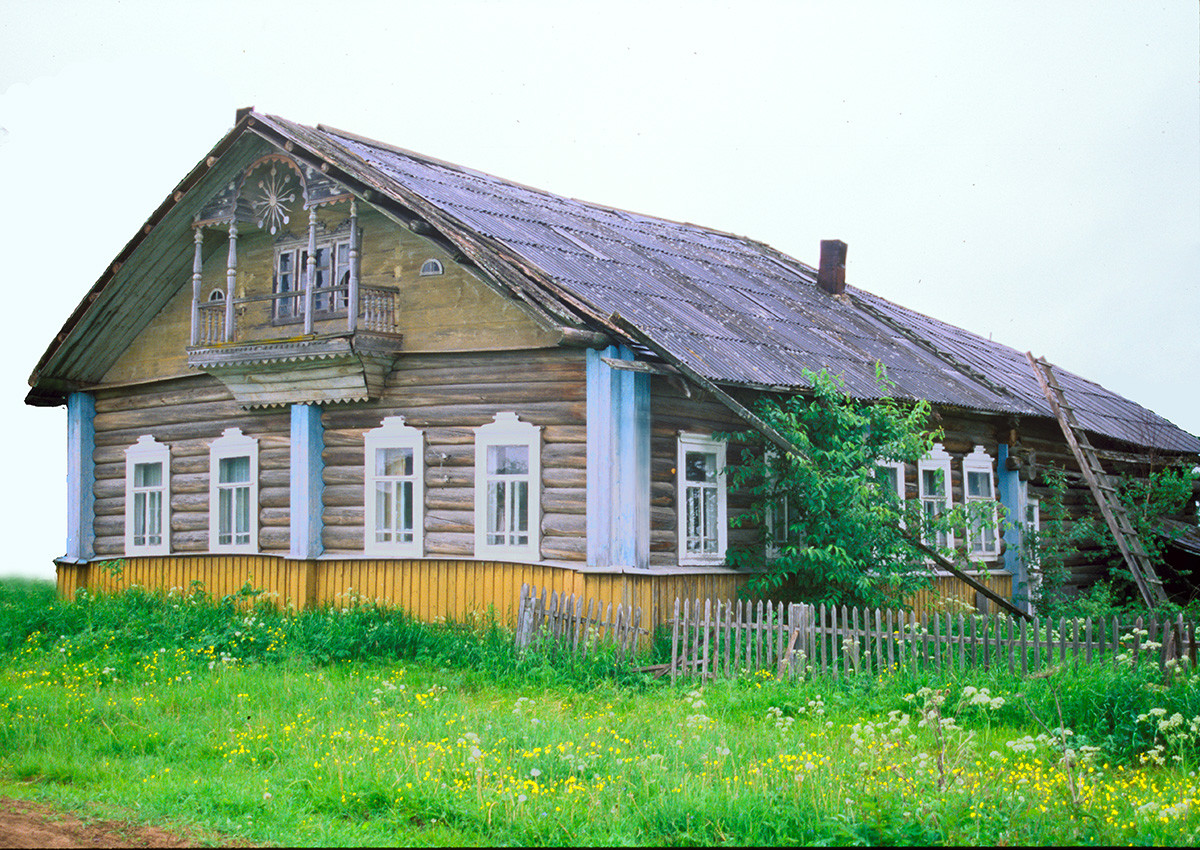 A distinctive feature of many houses in this area is the curved form of the roof. This bowed form was considered to facilitate the shedding of snow, although roofs in most areas of the north have a simple slant or pitch. Whatever the origins, this unusual, bowed roof design provides an appealing aesthetic quality of its own. 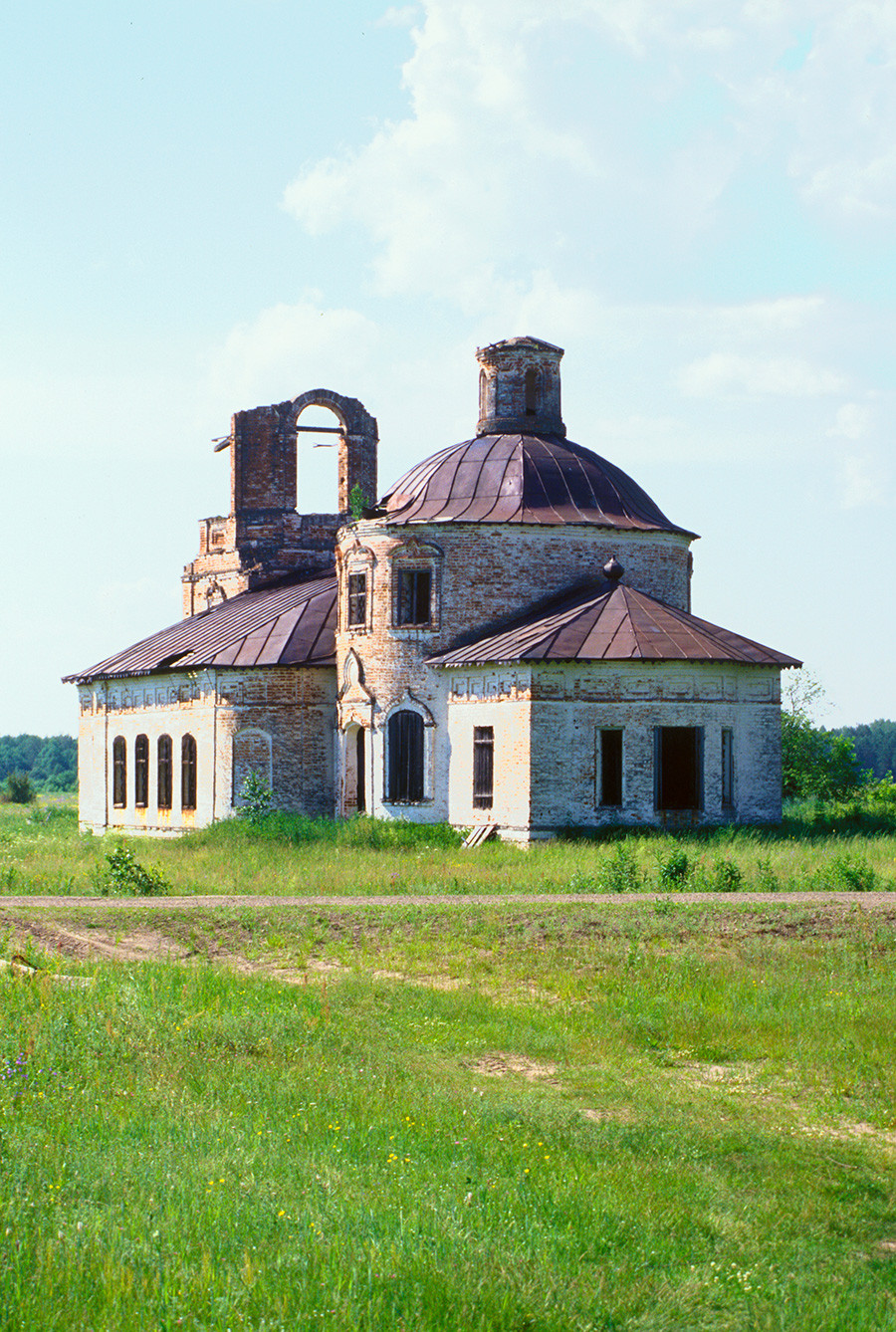 The path to Solvychegodsk goes through the once-flourishing village of Tsivozero, also known as Tsivozersky Pogost. Its brick Church of Sts. Peter and Paul, completed in the 1860s, was closed and abandoned during the Soviet area. Nonetheless, the exterior of the church impresses even with its ruined bell tower. During my visit, I saw that its bare interior had been swept and tidied by an elderly parishioner. 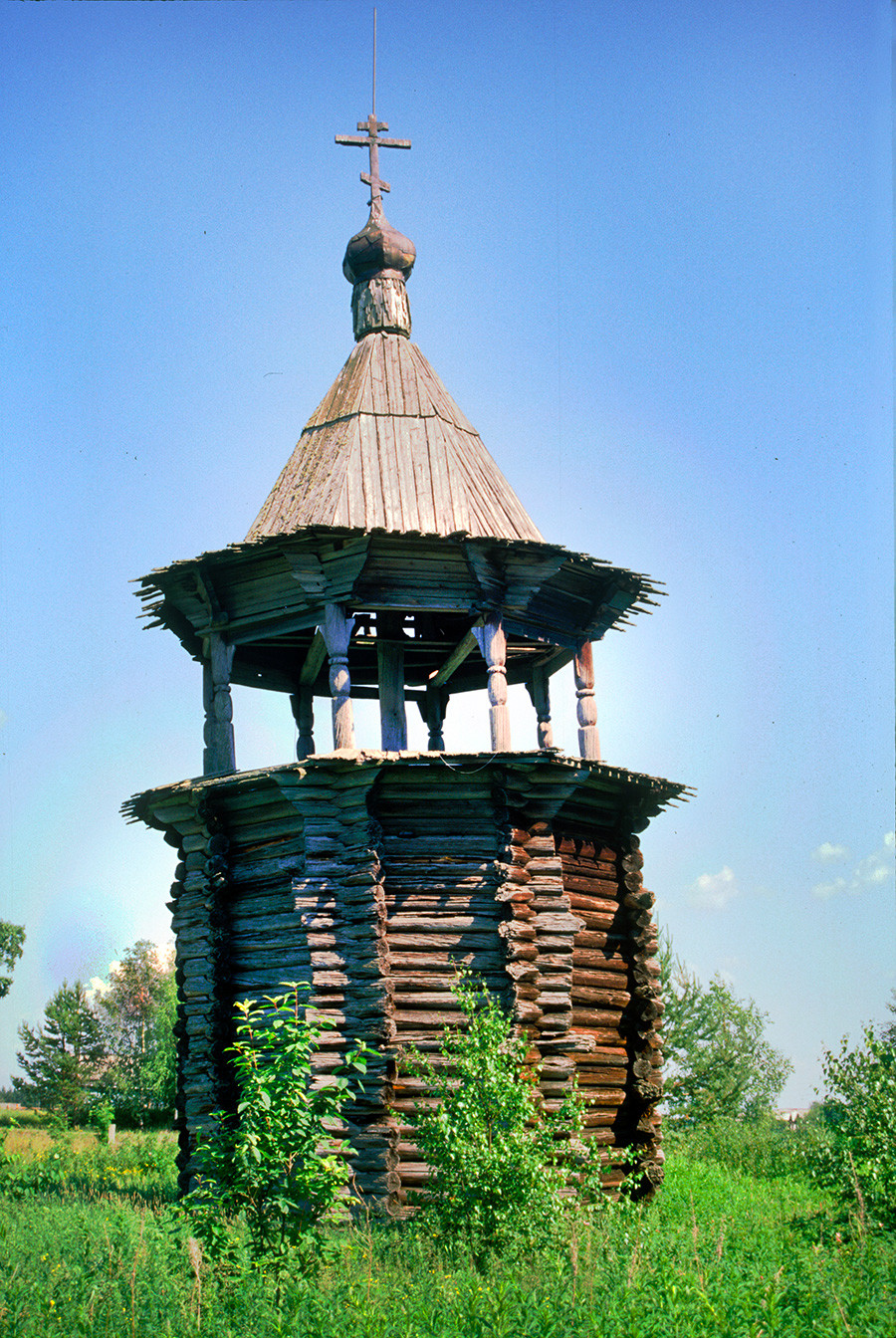 Tsivozero's most distinctive monument is the small, darkened form of a log bell tower. This intriguing octagonal structure was built in 1658 to accompany a church dedicated to Sts. Florus and Laurus. Although the church itself has long since disappeared, the intricate design of the bell tower provides a rare example of ancient traditions in log construction and decoration. Remarkably, it still stands on its original site and has become an emblem of the Russian North. 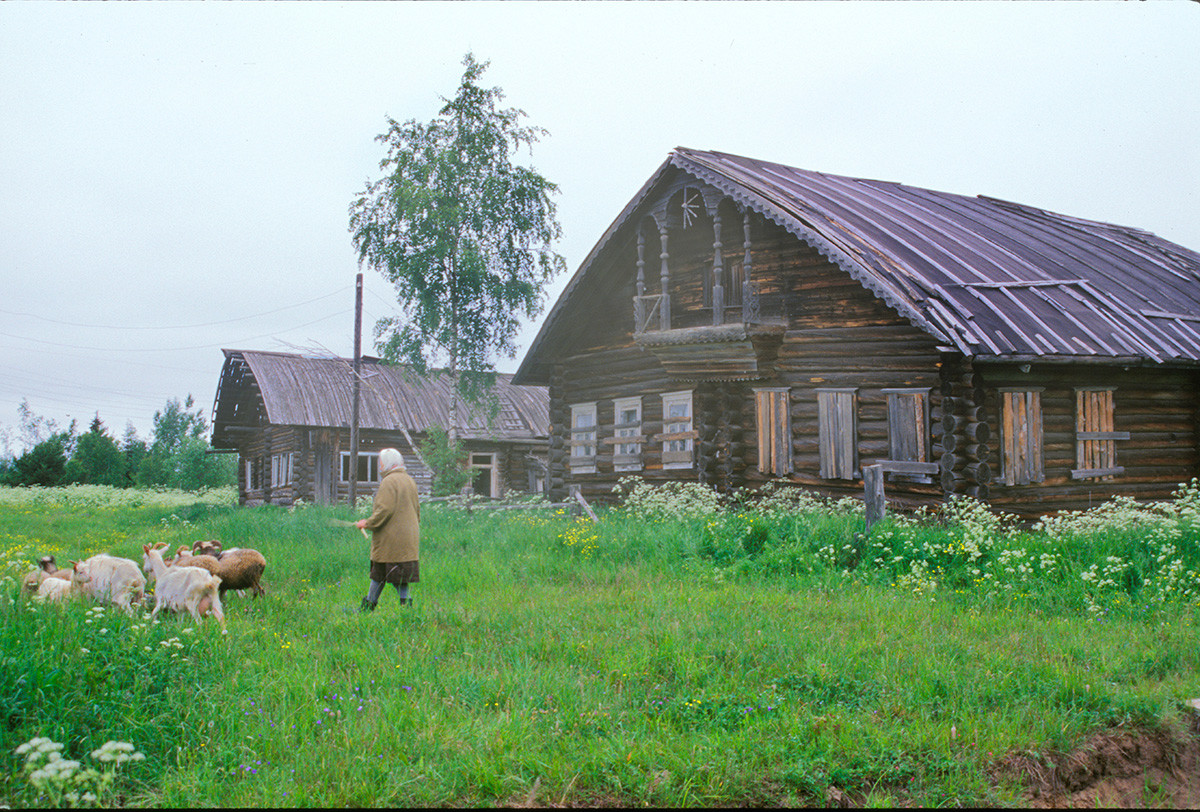 The way south to Solvychegodsk passes through other villages, some of which have small wooden chapels as well as an occasional brick church (usually abandoned). These pale as the forest road opens to Solvychegodsk, the original center of the Stroganov "empire". 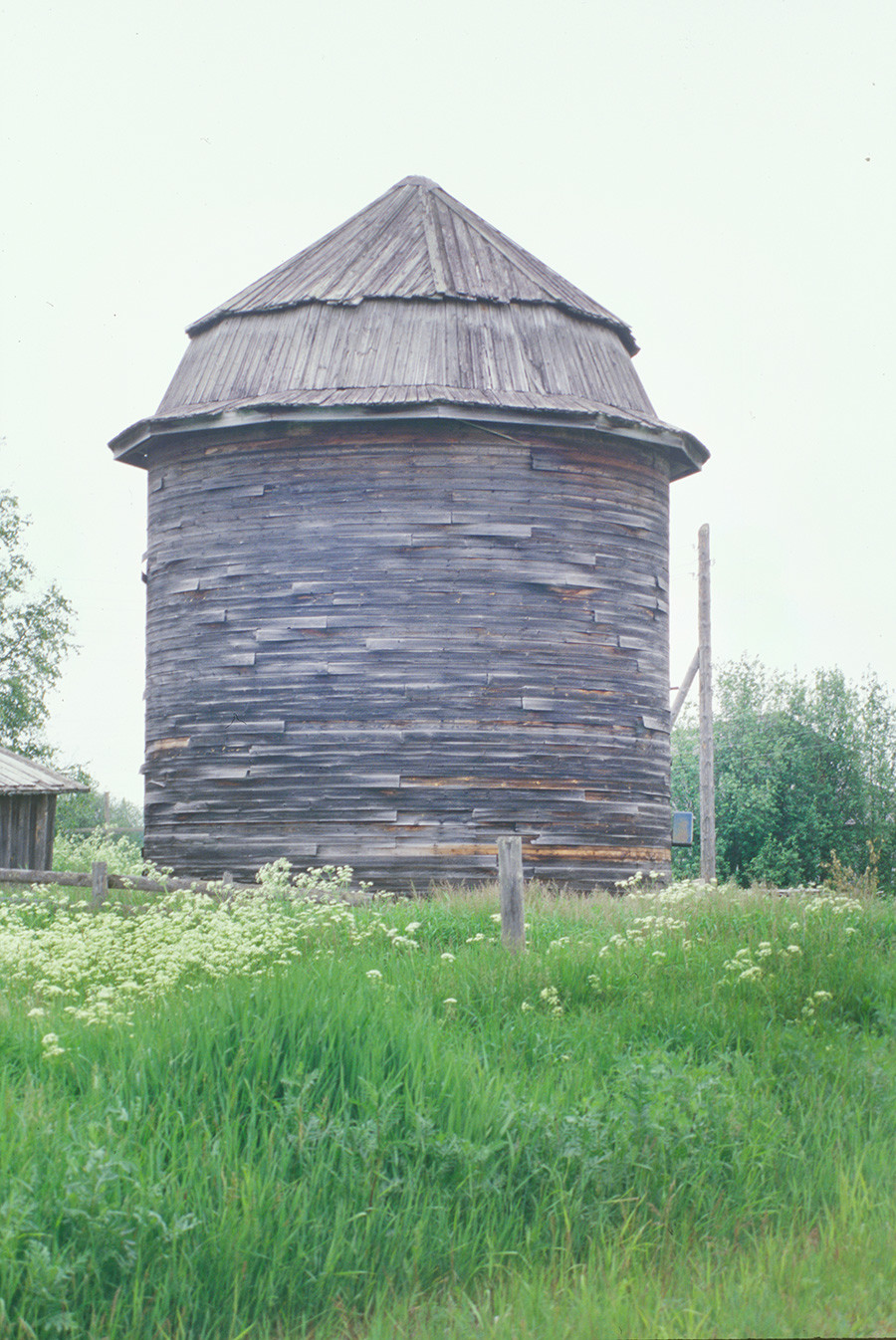 Solvychegodsk means "salt of the Vychegda," and during 16th and 17th centuries the area's salt springs produced wealth that was reflected in two grand Stroganov shrines, the Annunciation Cathedral (1560-84) and the elaborately decorated Cathedral of the Presentation (1688-93). Juxtaposing these magnificent structures to the ancient traditions of Uftyuga area villages reminds us of the mixture of high artistic culture and traditional design that characterizes the Russian North. 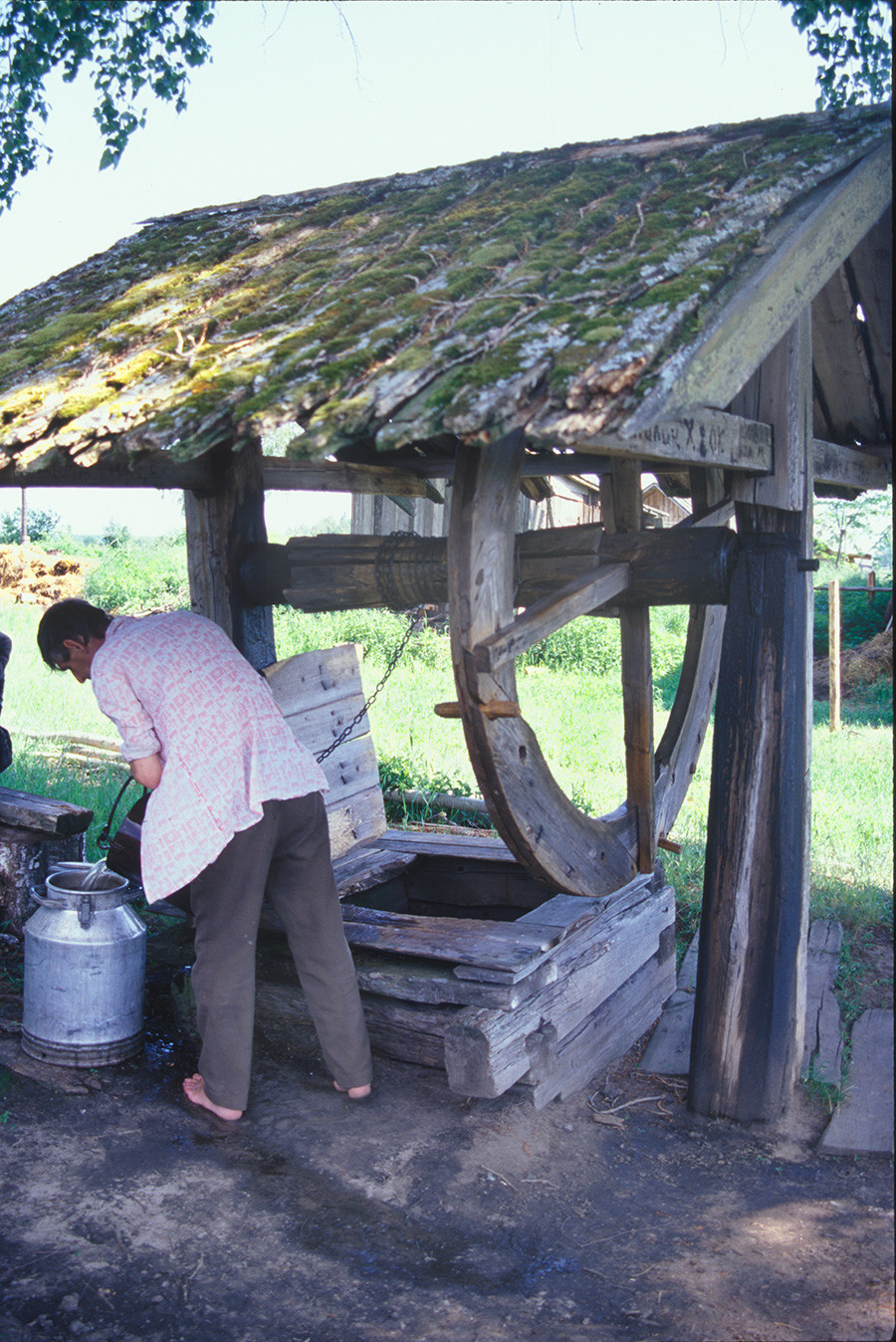 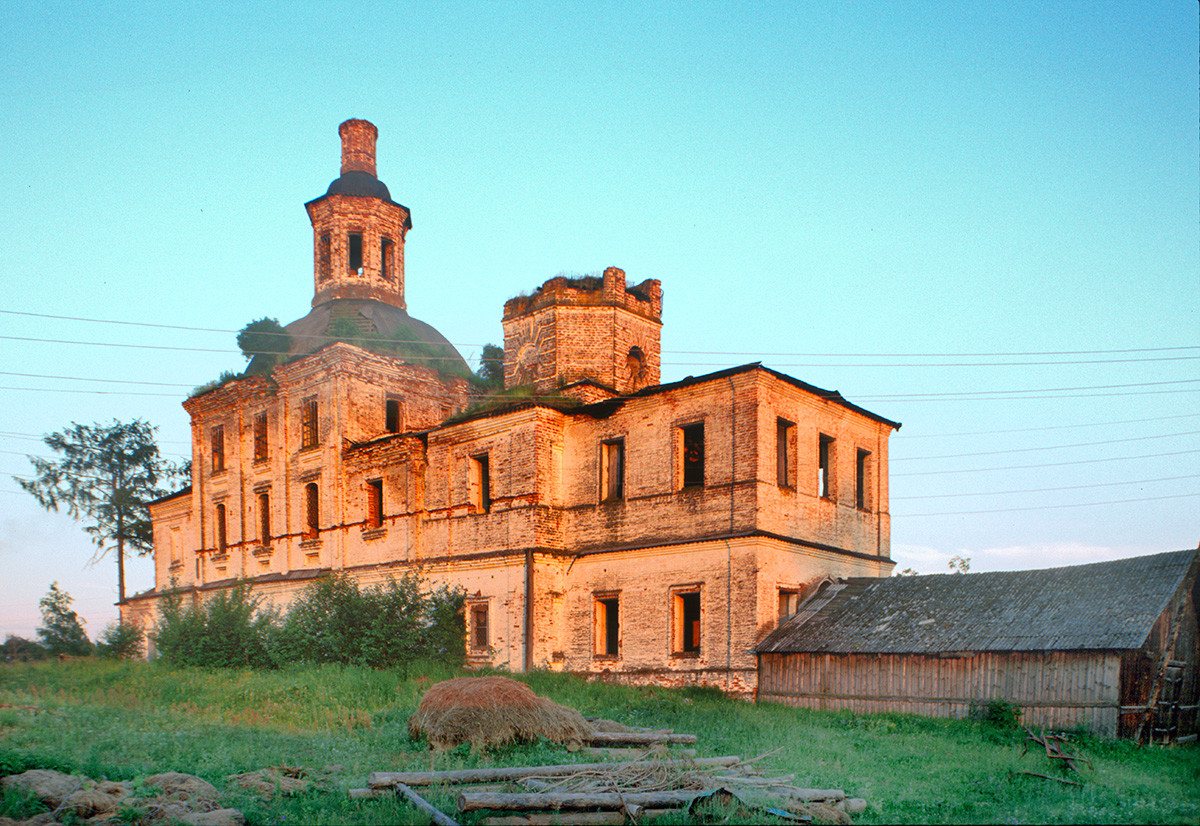