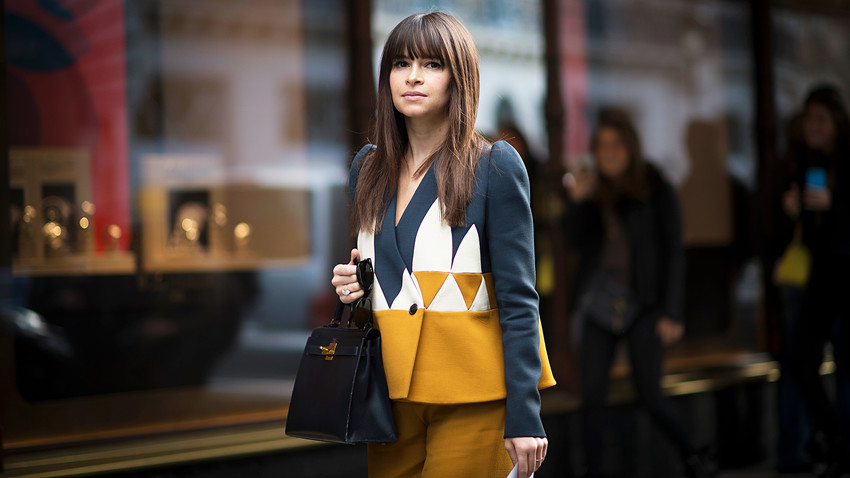 Miroslava Duma (see our No 4)

Getty Images
Russian fashion designers such as Gosha Rubchinskiy and Ulyana Sergeenko are making waves in the fashion world, but this bunch also have serious style.

This woman should have lived in the 1920s – her nymph-like elegance is befitting of the Silver Age of Russian poetry. Fabolous Matilda Shnurova is the ex-wife of Russian rocker Sergei Shnurov, owns St. Petersburg’s most fashionable restaurant, Cococo, and is also the founder of a ballet school.

She went head-to-head in Putin in the presidential and always looked the part during debates. In 2018 she was named Hello! magazine’s most stylish woman of the year.

For more than a decade, former fashion editor and observer Khromchenko was the “prosecutor” on a TV talk show called Fashion Court. By the way, she was the Russian voice over for Meryl Streep's character in the film The Devil Wears Prada – Khromchenko has even been compared to Anna Wintour, Vogue’s editor (who the movie is based on).

As Russia’s main IT girl and founder of online fashion platform Buro 24/7, Duma has an indisputable sense of style. Now 32, she’s of three kids and a successful entrepreneur, which only adds to her sex appeal?

A talented film director and actress, Litvinova is a heavenly creature, with her white skin, classic red lipstick, and 1920s curly blonde hair. She’s been the face of such brands as L'Oreal Paris and RADO watches. She sometimes sports futuristic/retro on her Instagram, which will inspire you no end.

This man is guru, pure and simple. Born into the family of a train driver and a chemist, Lisovets is one of Russia’s most popular hair stylist and designers. He is frequently invited to host different TV beauty shows.

of No 1 in our list, he is also the country’s current No 1 rock star. As a result, his style is often tinged with a touch of anarchy. Shnurov looks equally in a fur coat (with nothing on underneath), or in a basketball uniform, which he sometimes wears on stage during concerts. His heavy golden necklace has become one of his trademarks.

He started his TV career in the late 1990s when MTV Russia was launched. Now is the host of the country’s only American-style late night show. He has a great sense of humor and and looks equally dashing in tuxedos, leather jackets/trousers, and simple T-shirts.

The enfant terrible of the Russian ballet, scandalous and tattooed talented dancer Polunin appears in public in tuxedos, leather jackets (and pants), and casual T-shirts. On his he mixes up his outfits and videos of his great dancing – have you seen his “Take me to church” video?

of indie band Therr Maitz, which often tours in Europe, Belyaev is rarely seen without his stylish glasses. Despite the fact he mostly wears black, he has an awesome smile.

Read more: 10 ideas for the perfect fashion shoot in Russia