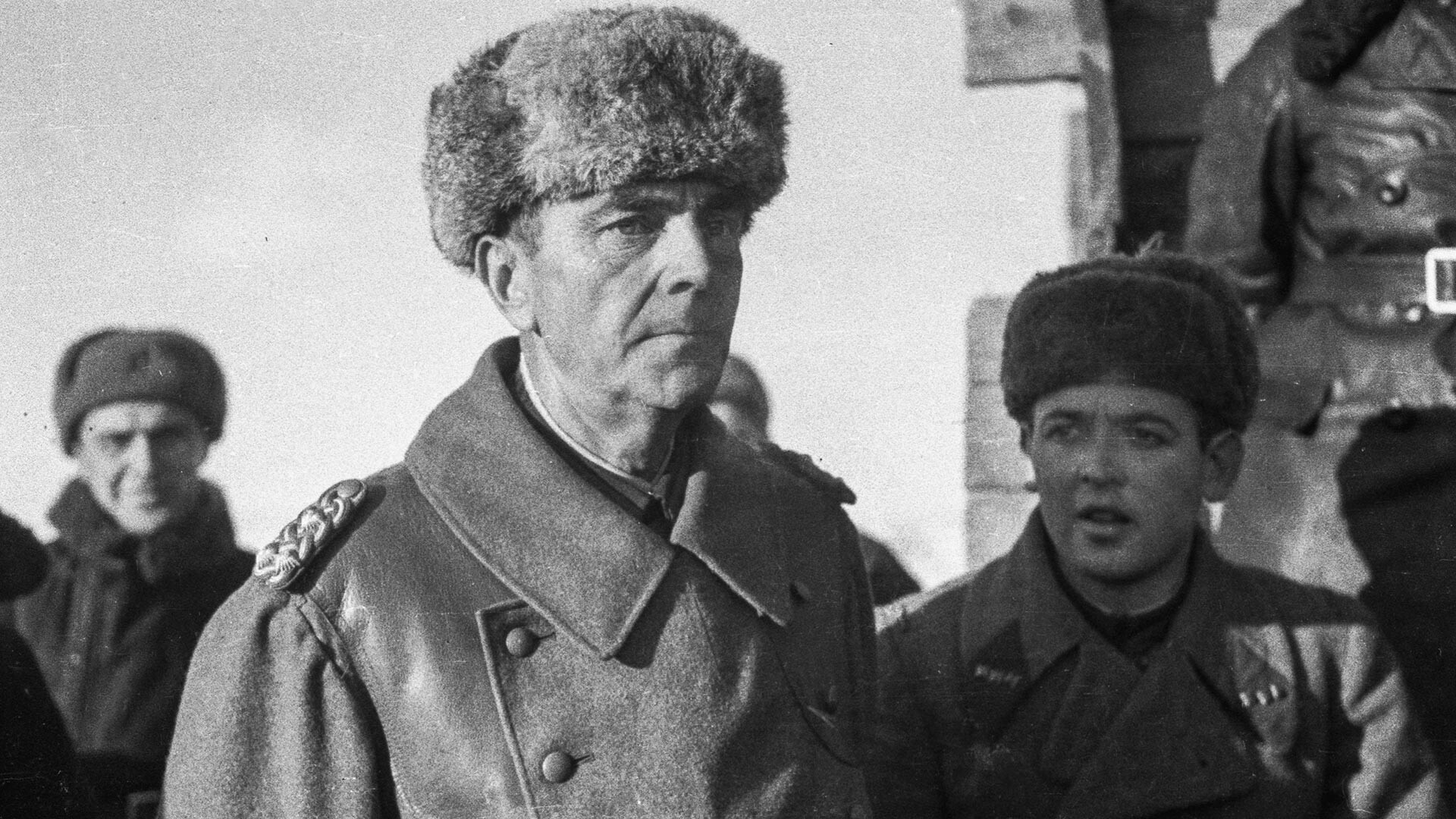 Ilya Tarantsov/TASS
Wehrmacht Field Marshal Friedrich Paulus was believed to have died in January 1943 near Stalingrad, with even his funeral held in Germany. However, in February 1946, he appeared in the Nuremberg courtroom, much to the surprise of everyone in attendance.

By January 1943, the 6th German Army found itself in a critical situation. Once the strongest field army in the Wehrmacht, it was quickly losing its combat effectiveness. By January 28, the remainder of the Army were split into three parts, with the Soviet troops successfully suppressing the German resistance. 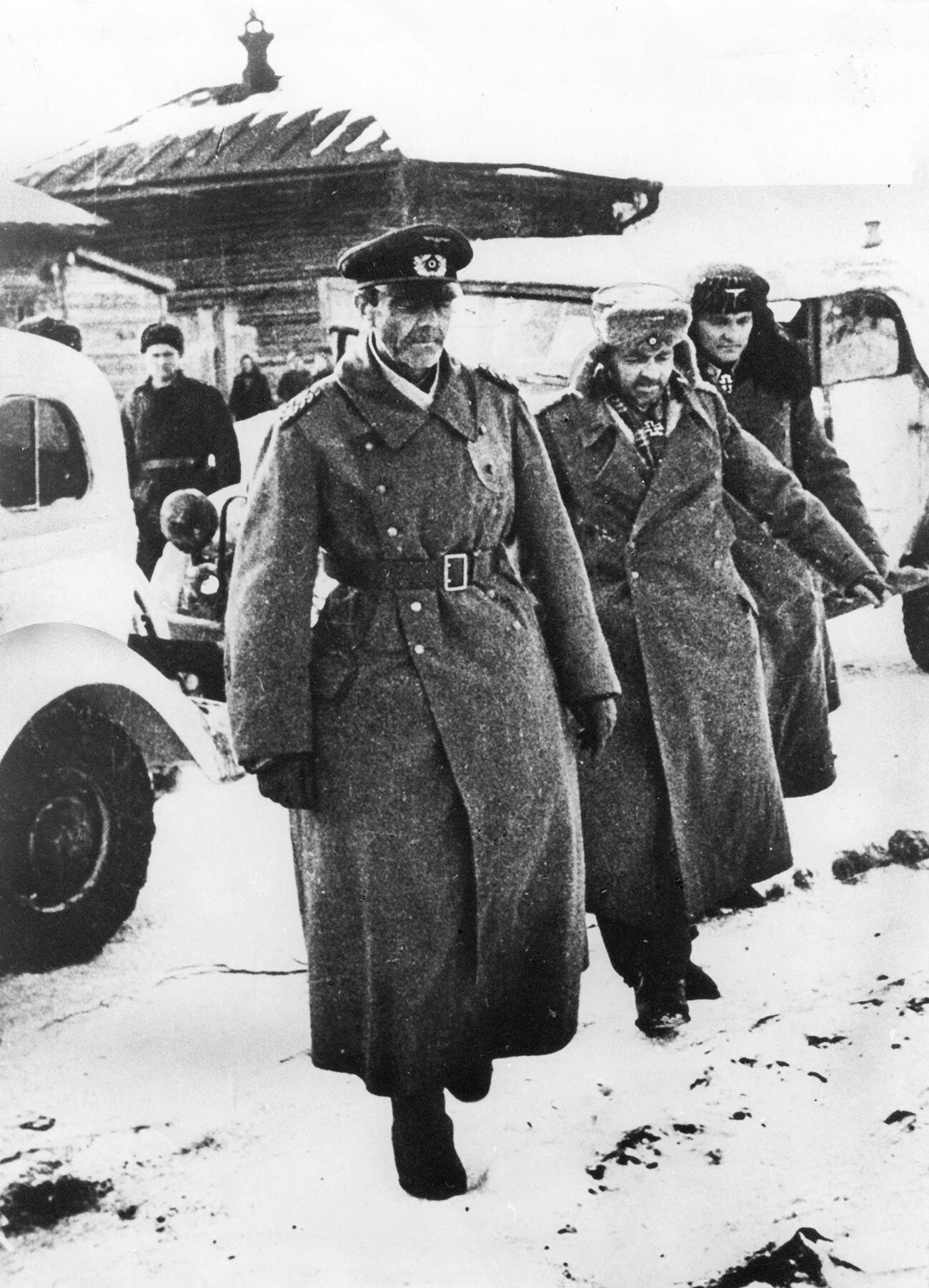 Field Marshal Friedrich Paulus captured by the Red Army during the Battle of Stalingrad, Soviet Union, 1943.

Time and again, Friedrich Paulus would send radiograms to the Führer, asking for permission to render himself prisoner to save the lives of his soldiers. Yet, all of his requests were flatly denied. On January 30, Hitler sent a radiogram to Paulus’ headquarters, in which he granted him the rank of Field Marshal and pointed out that “not a single Field Marshal had ever been taken prisoner”. He, thus, made it clear again that, in the case of the Germans’ defeat in the Stalingrad battle, the military commander was to commit suicide. It was the final straw. There is a legend, according to which, having read the radiogram, Paulus told his subordinates: “He wants me to shoot myself, but I won’t give him that joy.”

The following day, on January 31, he ordered one of them to contact the Soviet forces to negotiate the terms of capitulation. On that same day, the soldiers of the 64th Army took captive the 6th Army’s commander and all his staff. 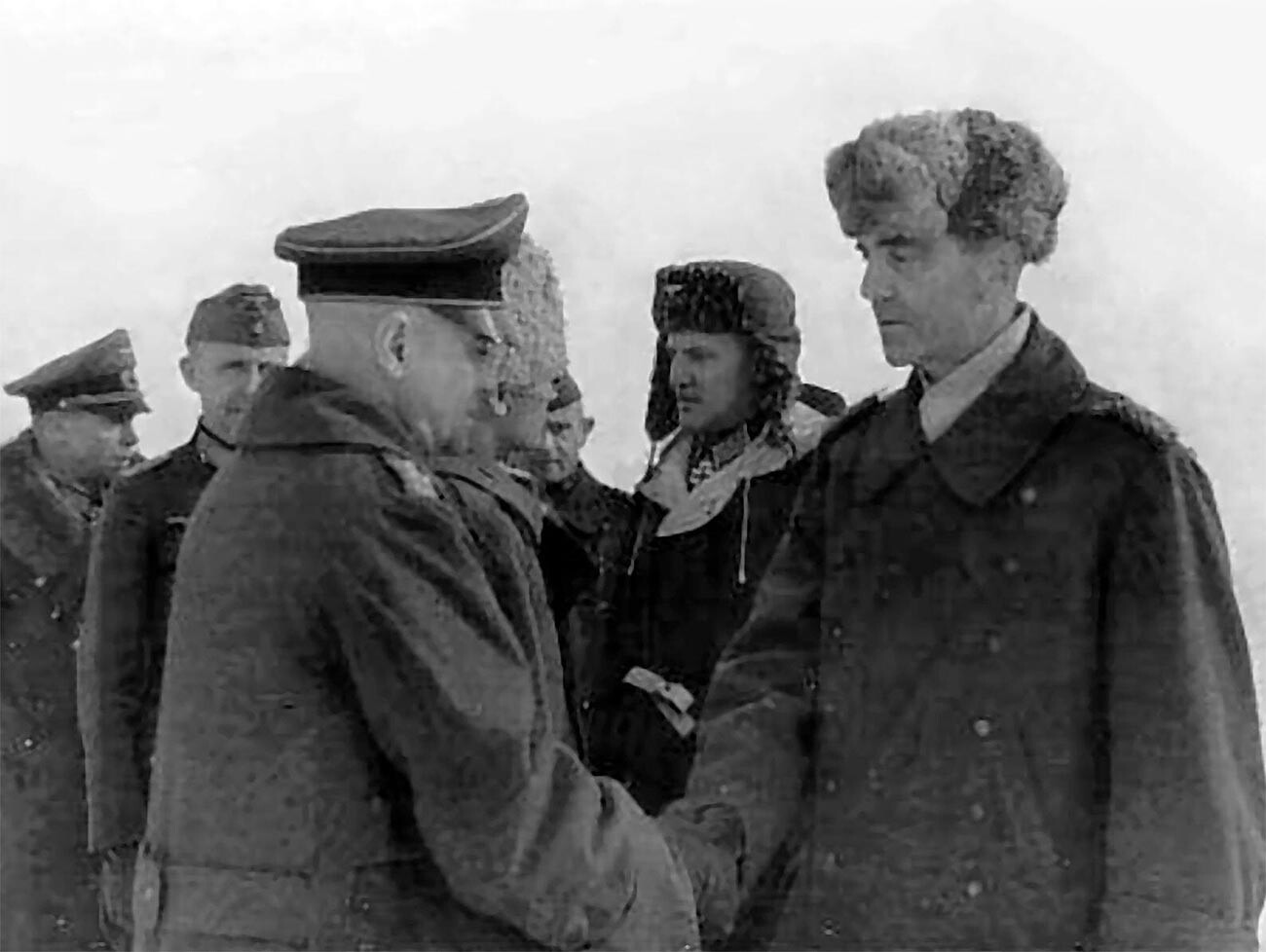 The defeat of the Wehrmacht’s 6th Army, especially its capitulation, had an overwhelming effect on the Führer, with the authorities attempting to conceal from citizens the fact that the Soviet troops had taken German soldiers captive en masse. A nationwide three-day mourning was declared in Germany. Hitler ordered to hold Paulus’ symbolic funeral and put a Field Marshal’s baton, which the general never received, atop the empty coffin.

In the 1940s, there was no person more reputable in the German Army than Friedrich Paulus. He enjoyed the respect of his fellow officers, subordinates, as well as the Reichschancellor himself. Paulus was, notably, one of those who worked on the ‘Barbarossa’ strategic plan to defeat the Soviet Union. Thus, it was particularly important for the Soviet leadership that he give up on his beliefs and start collaborating with the Soviet authorities. The set of measures to bring around the Nazi Field Marshal was dubbed Operation ‘Satrap’. 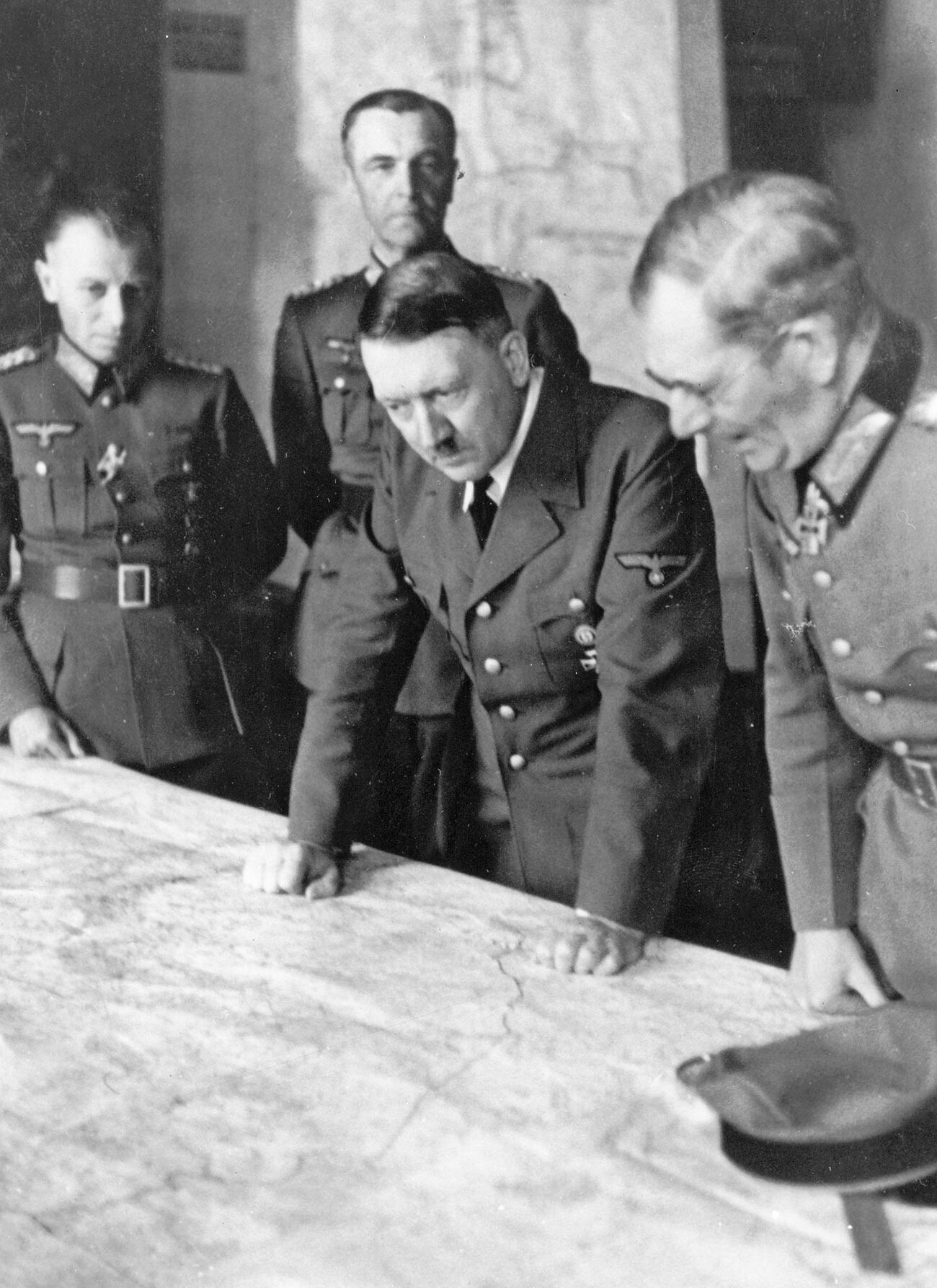 A major U-turn in Paulus’ vision took place in the summer of 1944, after some particular news was broken to him. First, he was informed about the death of his son, one of the twins - Captain Friedrich Paulus Jr., in Italy, in February 1944. Then, he heard about the crackdown on the plotters against Hitler on July 20 of the same year (it was Colonel Claus von Stauffenberg who carried out the plot and later enjoyed a lot of popularity). Some plotters among the Wehrmacht officials, who were close to Paulus and shared his beliefs, were executed. The former Field Marshal realized that since those people had stood up against Hitler, the game was worth the candle.

The Soviet authorities led a counter-propaganda campaign against the fake information spread by the Nazis about the Field Marshal’s alleged death near Stalingrad. Starting from August 1944, the German-language Moscow radio broadcast Paulus’s address to German people. In it, the former Field Marshal called for his compatriots to “do away with Adolph Hitler and set up a new government that will end the war” and restore “a peaceful and friendly relationship with the current enemy”. Leaflets with the military commander’s address were scattered around the territory controlled by the Wehrmacht. This is how Paulus became one of the propaganda activists in the battle against Nazism. He eventually joined the ‘Free Germany’ committee in the USSR, set up by the German Communist Party to work with the captive German military officers.

As early as 1942, the Soviet Union, for the first time, proposed to hold “a special international tribunal” meant to take to court and punish “in full accordance with all the strictness of the Criminal Code any of the leaders or masterminds of fascist Germany who ended up in the hands of the anti-Hitler coalition in the course of the war”. 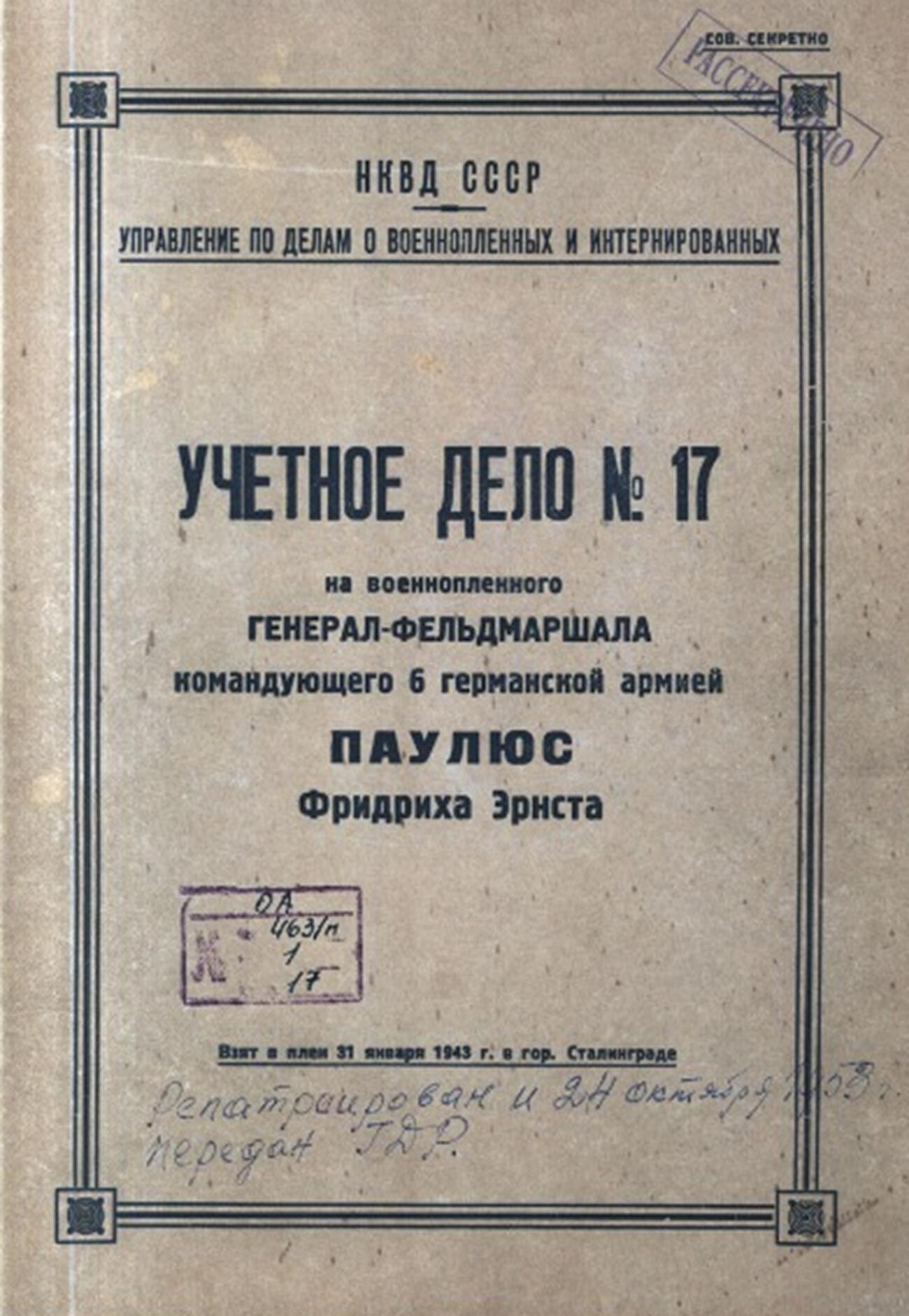 By the time Paulus was taken captive, negotiations about an international tribunal had already been underway, showing little progress, though, due to the different stances of the allied countries (the U.K. and the U.S., on the one hand, and the USSR on the other). For instance, closer to the end of the war, on April 23, 1945, Great Britain suggested executing the war criminals without any court proceedings. There was a belief circulating around that, in theory, the defence could acquit the Nazis. The negotiations proper between the USSR, the U.S., Great Britain and France about the creation of a tribunal kicked off on June 26 and lasted until August 8, 1945. As a result of the talks, it was finally decided to hold the trial, which started its work on November 20, 1945, in the Bavarian city of Nuremberg.

However, a year later, by the Fall of 1946, the trials had hit a stumbling block.  Both the defense and the defendants started voicing ideas that Germany’s offensive against the USSR was virtually a preventive measure. On June 22, 1941, the day the USSR was attacked, Hitler himself justified the start of the war in his radio address to the nation: “The German people have never had any hostile feelings for the peoples of Russia. Yet, for over two dozen years, the Jewish-Bolshevik authorities in Moscow have been trying to set fire to not only Germany, but the whole of Europe.”

In order to dispel the rumors about Nazi Germany’s “preventive” military action against the USSR, the Soviet delegation in Nuremberg came up with a shorthand report of Paulus’ interrogation in Moscow. Yet, the Nazis’ defence referred to all the documents as falsifications, calling the report itself “fabricated”. 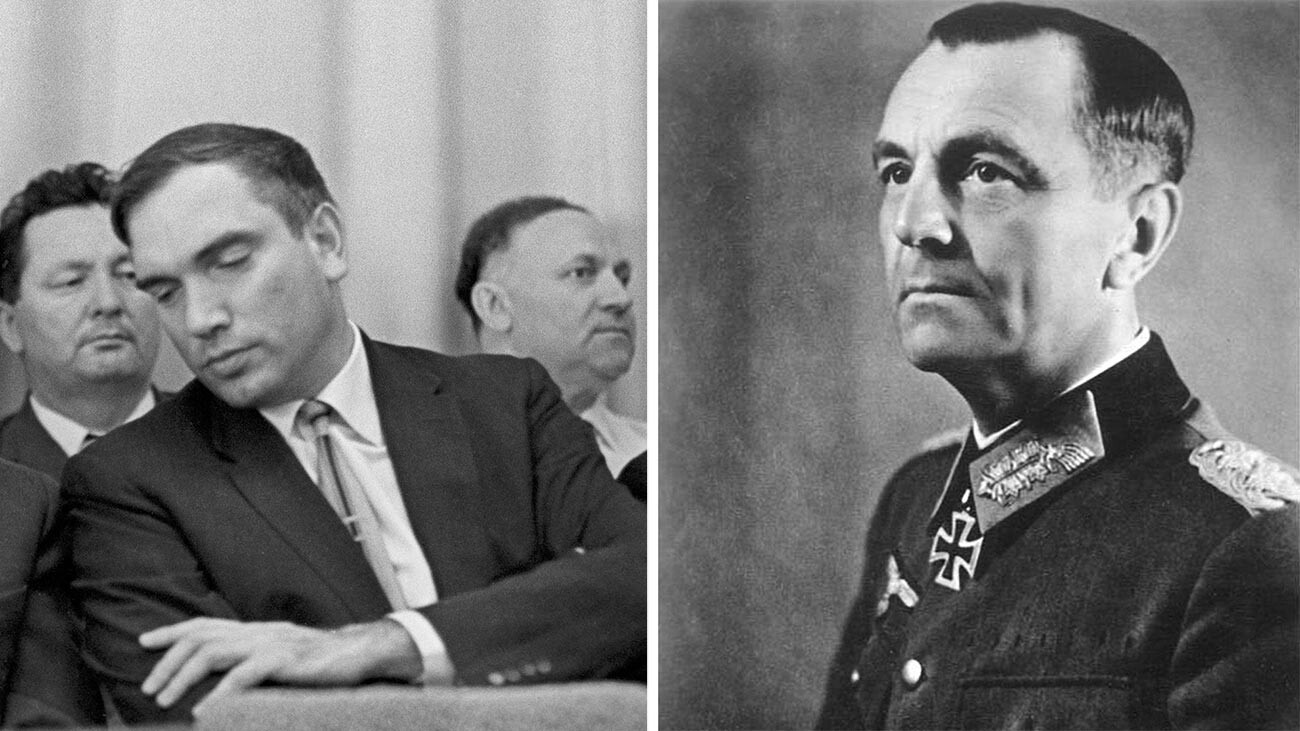 Soviet authorities made a decision to take the former Field Marshal to Nuremberg on conditions of total secrecy, so that he could give his testimony.

Paulus’ arrival was kept secret even from the Americans, although the city was located in the American occupation zone. For the ex-Field Marshal to safely get to Nuremberg, the Soviets engaged Enver Mamedov, the interpreter from the USSR, who resembled Paulus to a certain extent.

Thus, there were two cars passing through the American block posts on the border with the Soviet occupation zone: there were men in identical suits and hats sitting in the back seats of both of them. Mamedov travelled in the first one, serving as a bait in a potential assassination attempt, while Paulus was in the second car carrying fake documents to not be identified if found dead.

On February 11, 1946, the Nazi criminals’ defence claimed, once again, that Paulus’ testimony in Moscow “had been fabricated and given under pressure and torture in the NKVD confinement”. In response, main judge Geoffrey Lawrence asked Soviet prosecutor Roman Rudenko:

- How many days would it take to bring Paulus to Nuremberg, if the Soviet Union agreed to?

It was time to show the trump card. Rudenko replied nonchalantly:

- About thirty minutes. Paulus is now in the Soviet delegation’s residence here in Nuremberg. 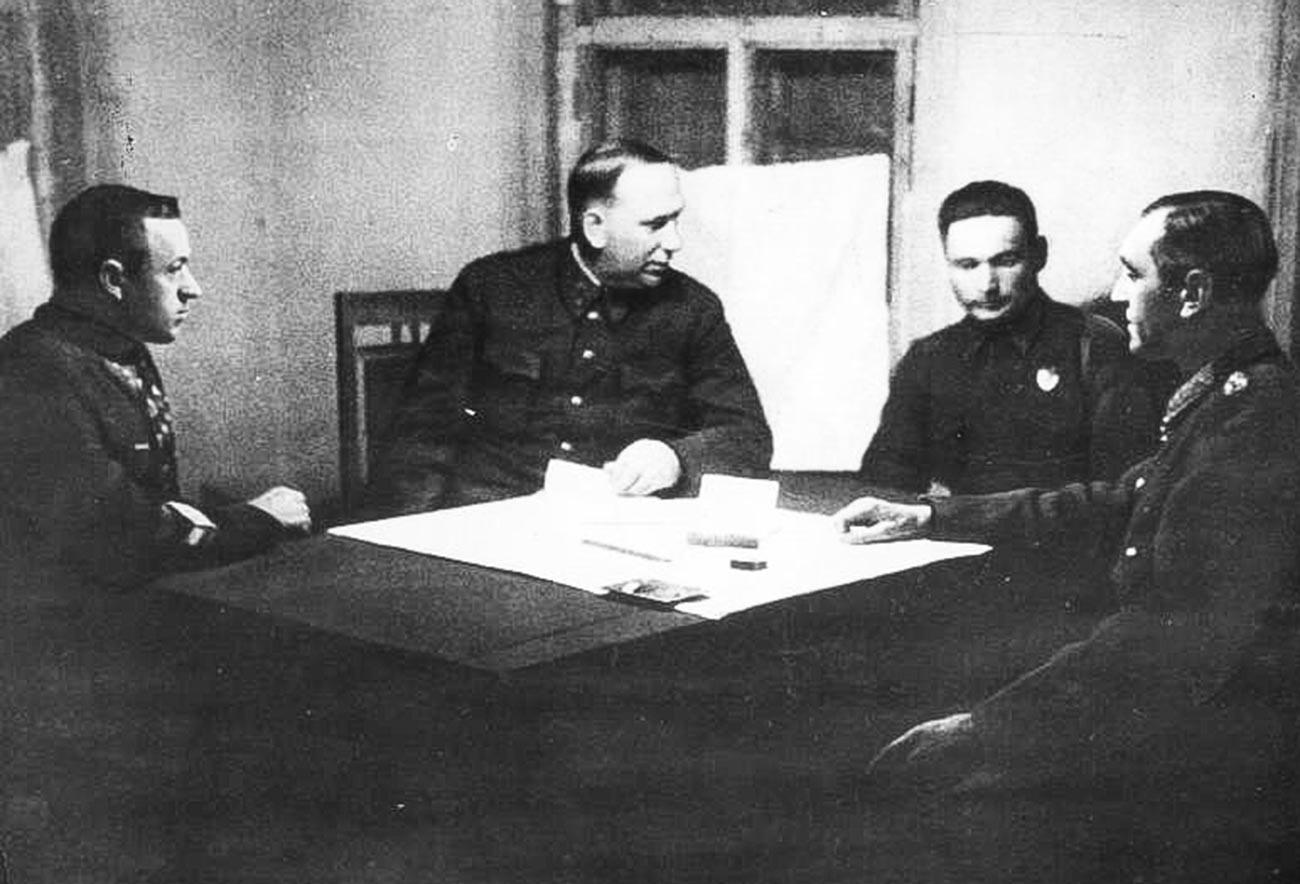 At that point, a man wearing a brand new suit, specially tailored for him in the USSR, and freshly polished shoes, entered the courtroom. This created a truly bombshell effect on those in attendance. Even if some of them had assumed that Paulus was alive, nobody had expected him to appear in the courtroom that quickly.

The former Field Marshal’s presence in the court became the biggest sensation since the tribunal kick-off. The journalists covering the trials instantly started sharing the news with their editorial offices. 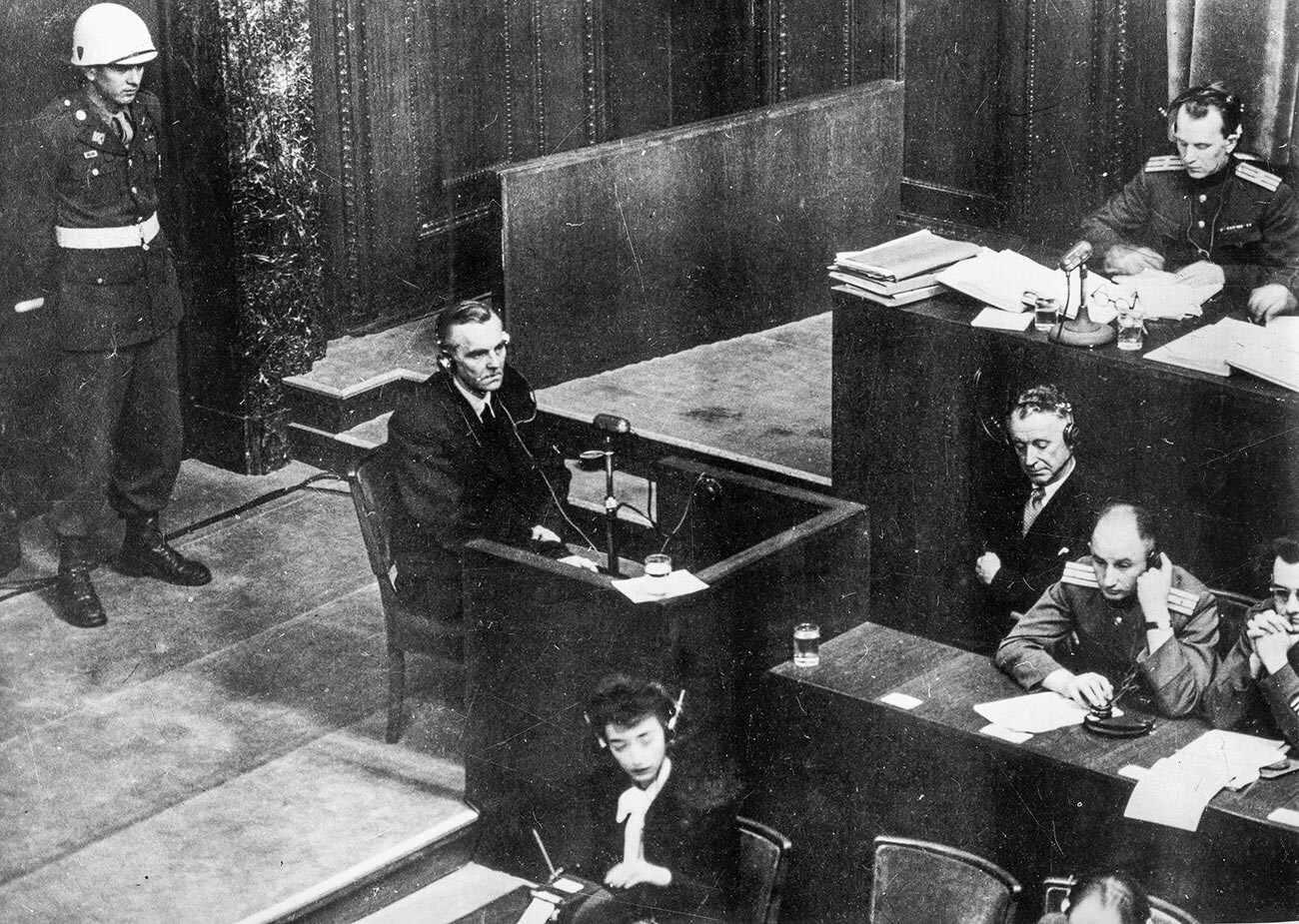 Friedrich Paulus testifies in the Nuremberg trials In 1946.

During the interrogation that followed, Paulus stated that, in early September 1940, when he “started working as a chief quartermaster in the general HQ of the field army’s Chief Command”, he stumbled upon “among other documents, an unfinished intelligence report, which focused on an offensive against the Soviet Union”.

Initially, the Führer planned to launch military action against the USSR in mid-May 1941, but, according to Paulus, the timing “was changed, because, in late March, Hitler chose to attack Yugoslavia, due to the altered situation in the country”. The military commander also stated that “all the preparations for the war with the USSR, which broke out on June 22, were already underway in the Fall of 1940”. 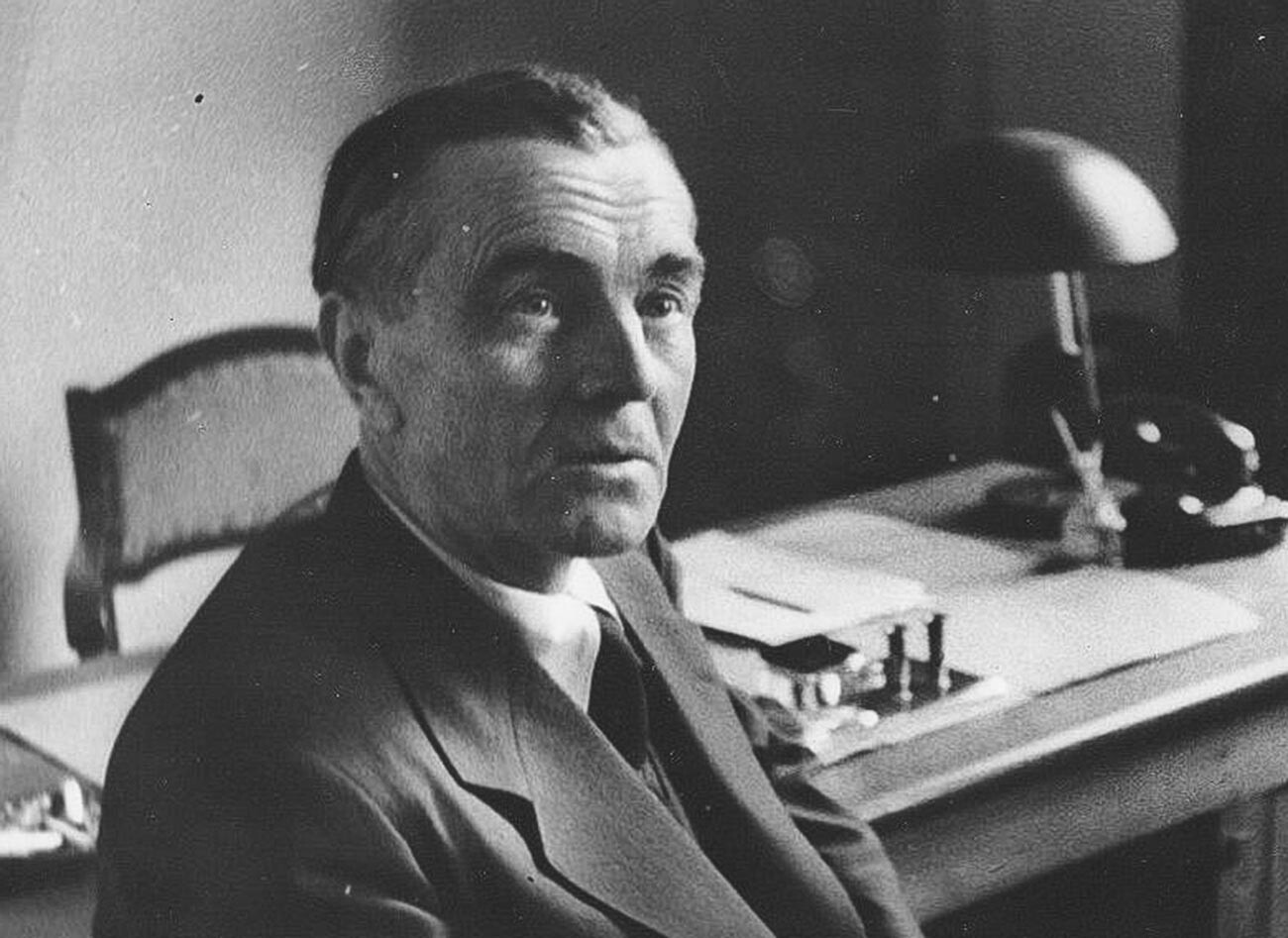 Paulus described everything in minutest details. The following day, the defense conducted a cross-interrogation of the former Field Marshal, but it failed to discern any controversies in what he said.

Thanks to Friedrich Paulus’ presence at the trials and his testimony, the Soviet delegation managed to prove that the offensive against the USSR had been planned by the Nazi leadership well in advance. The Nazi criminals were, thus, left no chance of being acquitted.