What’s so mysterious about this assassination attempt on the Red Square in 1942? 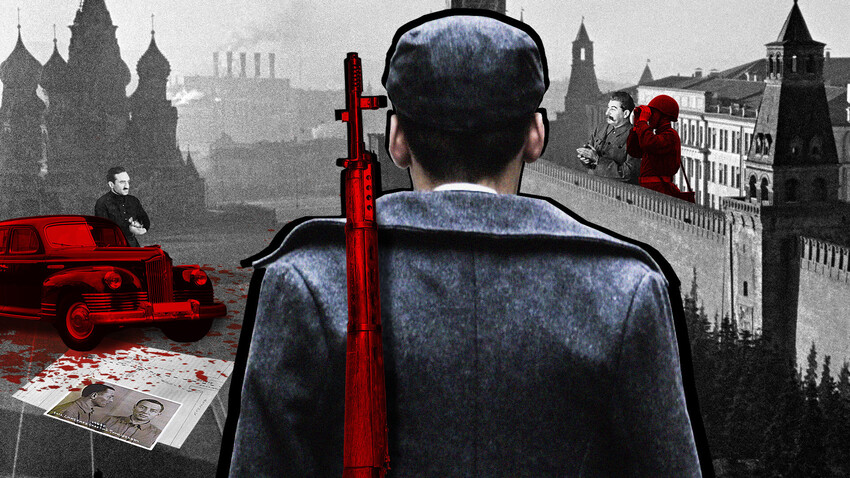 Kira Lisitskaya (Photo: Konstantin Kokoshkin/Global Look Press; Anatoly Garanin/Sputnik; The Swedish Army Museum)
Everything suggested there was a conspiracy, but the investigation veered in a different direction.

As a government motorcade was entering the Red Square on November 6, 1942, a man in a military uniform opened fire aiming at the high-profile passenger inside. For years, the case puzzled investigators: was it a Nazi espionage plot, a counter-revolutionary conspiracy or a lone wolf attack?

It was November 6, 1942, and Soviet police, NKVD and the military were on high alert, because high-profile guests started arriving at the Red Square to celebrate the 25th anniversary of the Bolshevik Revolution. 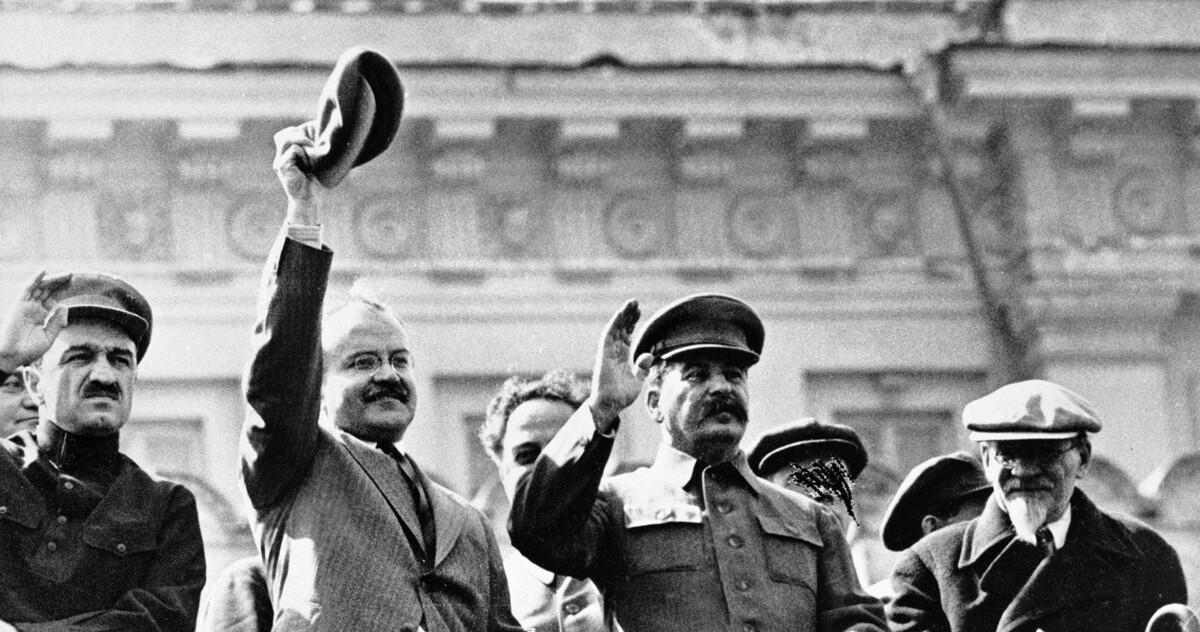 At noon, lance-corporal Savely Dmitriev came on duty in the regiment’s garage. Armed with a rifle, he left his post and proceeded to the Red Square. Reaching the square, he climbed the steps to the so-called Execution Place, the circular white-stone construction set up on a pedestal in the Red Square near St Basil’s Cathedral, also known as the Place of the Tsars. 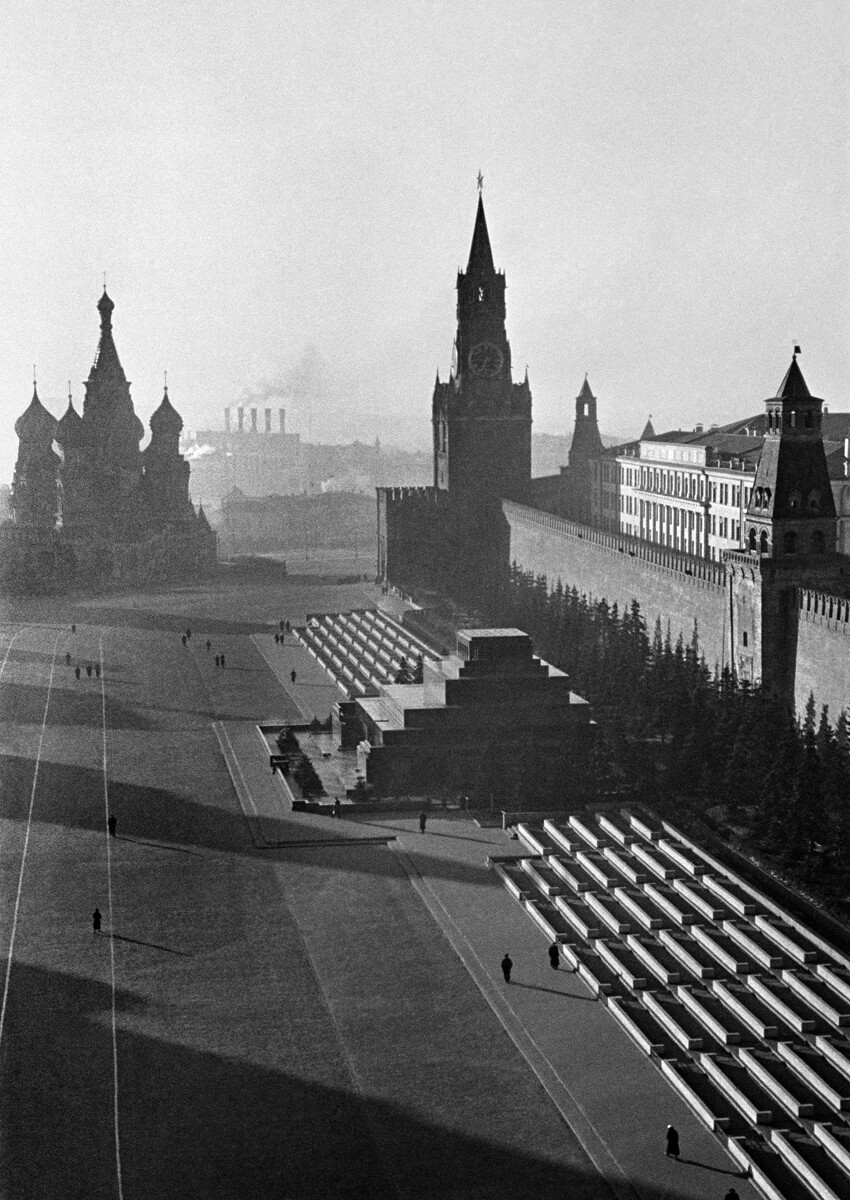 He secured the gates with a wire and looked around. The place was a perfect spot for an armed person who plotted to kill.

The mysterious sentinel standing guard in a highly unusual place triggered suspicions of the Soviet police who patrolled the Red Square. However, Dmitriev found a way to confound them by providing firm answers that lulled their vigilance. 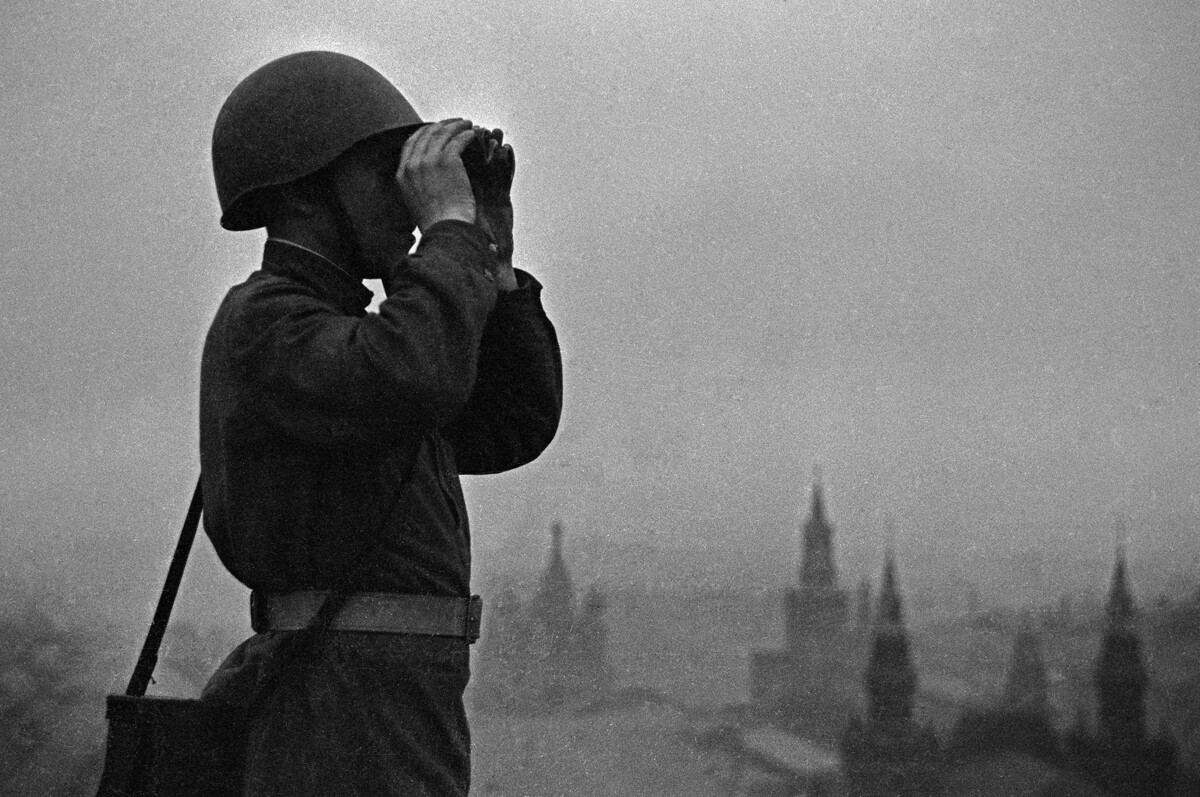 Roughly at 14:55, a motorcade of government cars appeared from the direction of the Vasilyevsky Spusk near the St. Basil cathedral. In the following moments, a minor incident happened. However, in hindsight, it would come to puzzle the investigators for years. 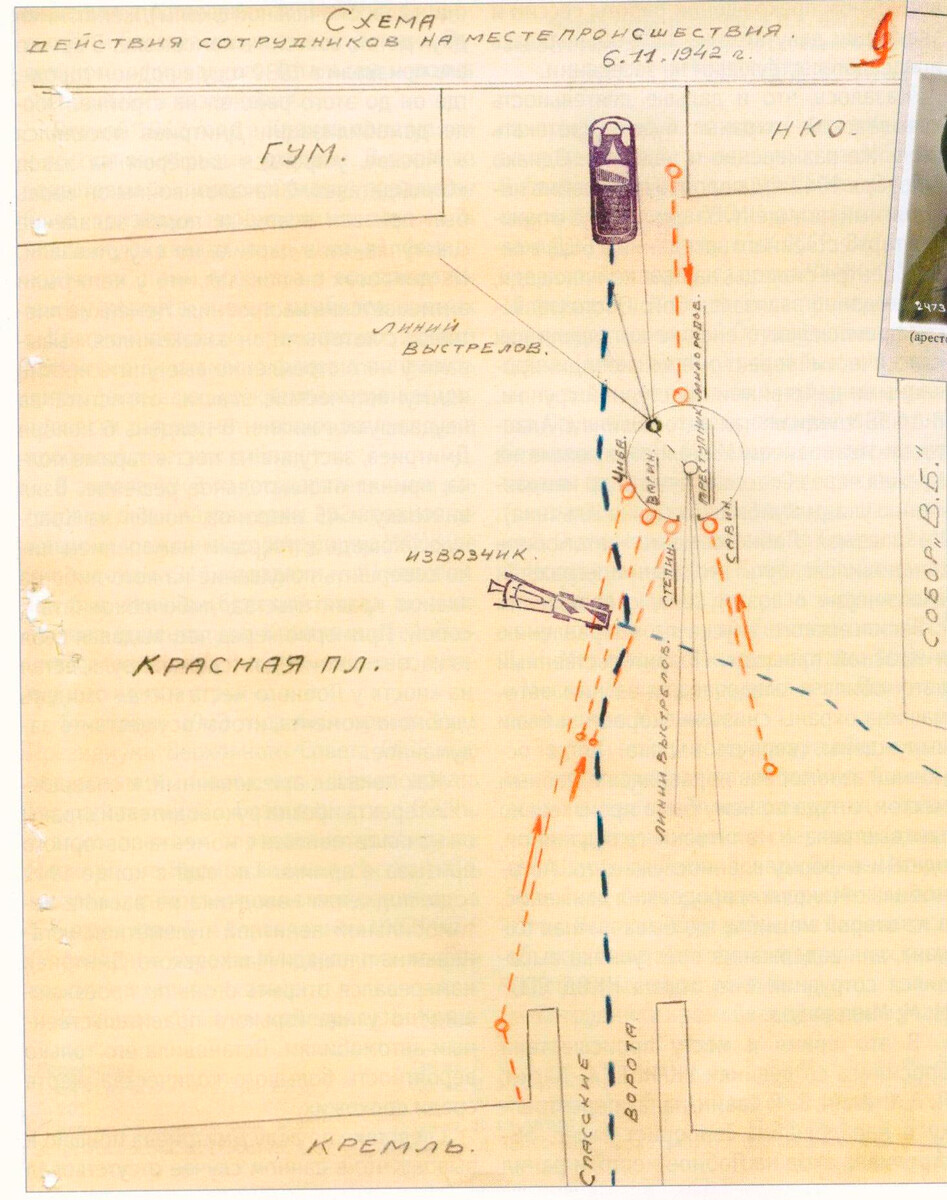 A layout of the assassination attempt on Anastas Ivanovich Mikoyan on Red Square drafted by the NKVD of the USSR.

A hay cart appeared out of nowhere and crossed routes with a governmental car carrying Soviet Commissar of Foreign Trade Anastas Mikoyan. The carriage driver appeared to lose control of the horse and Mikoyan’s driver had to twist the steering wheel to the right to avoid contact with the carriage. Doing so, he drove closer to the Execution Place and slowed the car down.

At this moment, Dmitriev raised his rifle and fired three shots at the car.

Realizing they had been attacked, the car driver sped up, NKVD officers jumped out of the escort car and a firefight ensued.

The shooter confronted the agents, but was eventually stunned by a grenade explosion and surrendered. 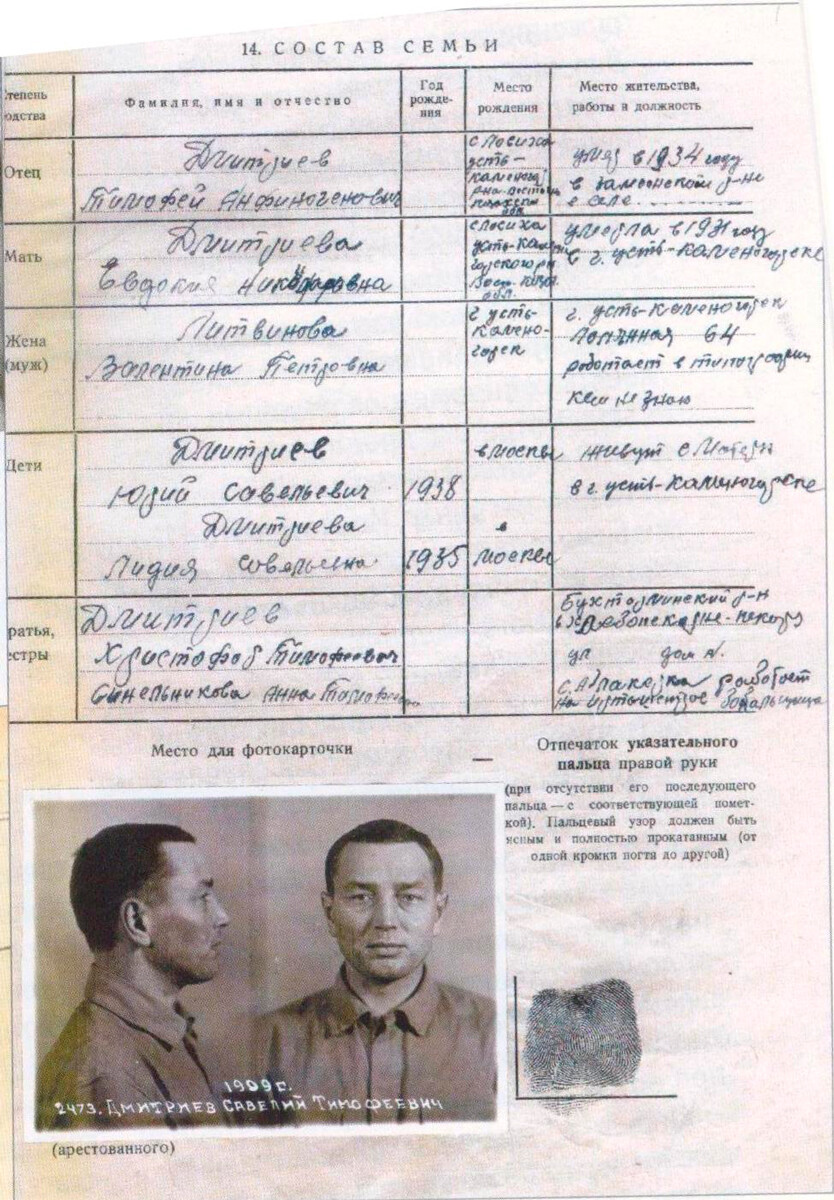 A page of the personal file of Savely Dmitriev, accused by the NKVD of the USSR.

Considering Joseph Stalin could have been a victim of the shooter, the investigators were doing their job fervently.

A Nazi plot to exterminate the head of the Soviet state during the war or, alternatively, a counter-revolutionary plot to kill Stalin seemed only too natural a theory. Otherwise, it was impossible to put all the coincidences that led to the assassination attempt into one coherent theory. How did the hay carriage get near Red Square? Why was the security detail oblivious to a stranger who remained at the elevated Execution Place for hours? These questions puzzled the investigation for years.

At first, Dmitriev did not volunteer too much. He confessed to planning to kill Stalin, but that was everything the investigators learned from the arrested man.

The investigators interrogated the man intensely and for a long time. However, the classified case retained some key blank spots.

For example, it is unclear if the carriage driver was investigated.

What’s even more important, it is unclear if Dmitriev was mentally healthy. Although a special commission concluded the attacker did not suffer from mental illness, there was evidence that suggested that Dmitriev experienced the auditory hallucinations and had unstable mental responses. 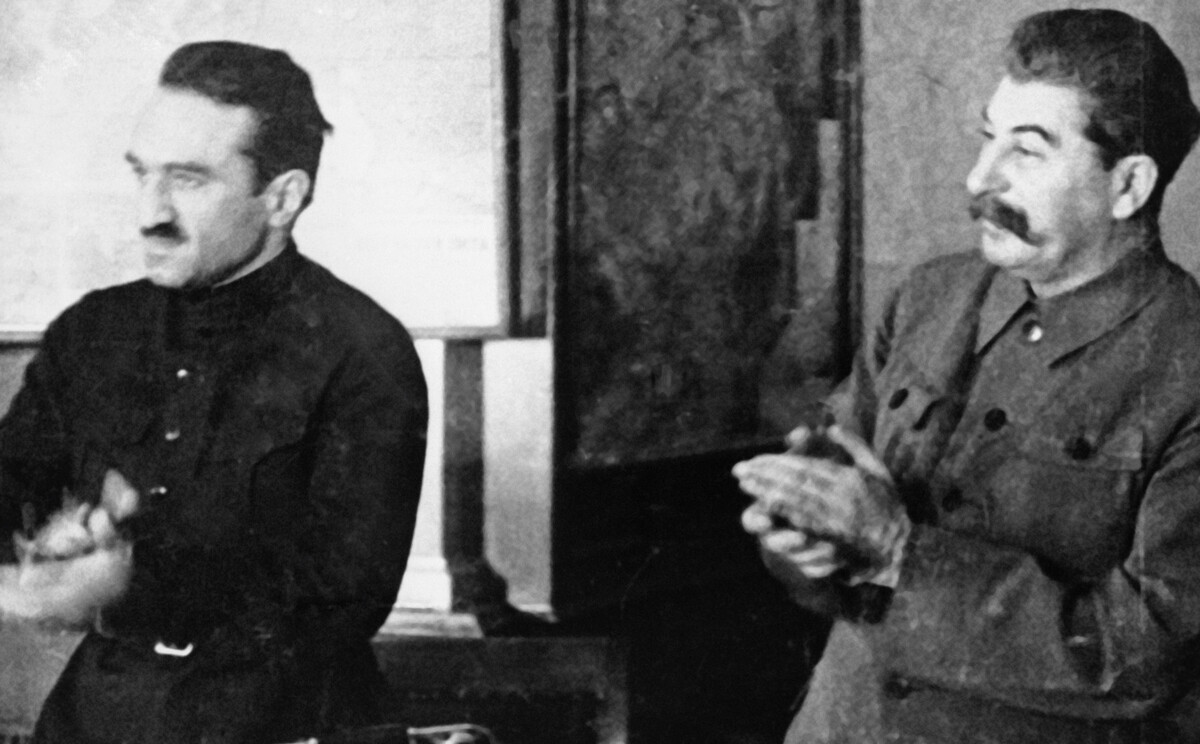 Josef Stalin, General Secretary of the Central Committee of the All-Union Communist Party and Anastas Mikoyan, People's Commissar of the Food Industry of the USSR (left), 1935.

Eventually, the investigation ruled out clandestine plots and reached a simple conclusion: this was a lone wolf attack. However, it took another six years for the investigation to pass the case to the court. It is unclear why this process was prolonged so much. Perhaps, the investigation continued unofficially, looking for a possible conspiracy.

The court examined the case about the assassination attempt on the Red Square only in 1950. Dmitriev was found guilty and sentenced to death. On the same day, the sentence was carried out by a firing squad.

The general public of the USSR never knew about the shooting on the Red Square. Neither did they know about the unfolding investigation, the trial and the subsequent death sentence.

Click here to find out who were the men behind the era of CONTRACT KILLINGS in Russia.