10 facts about the Russian troika 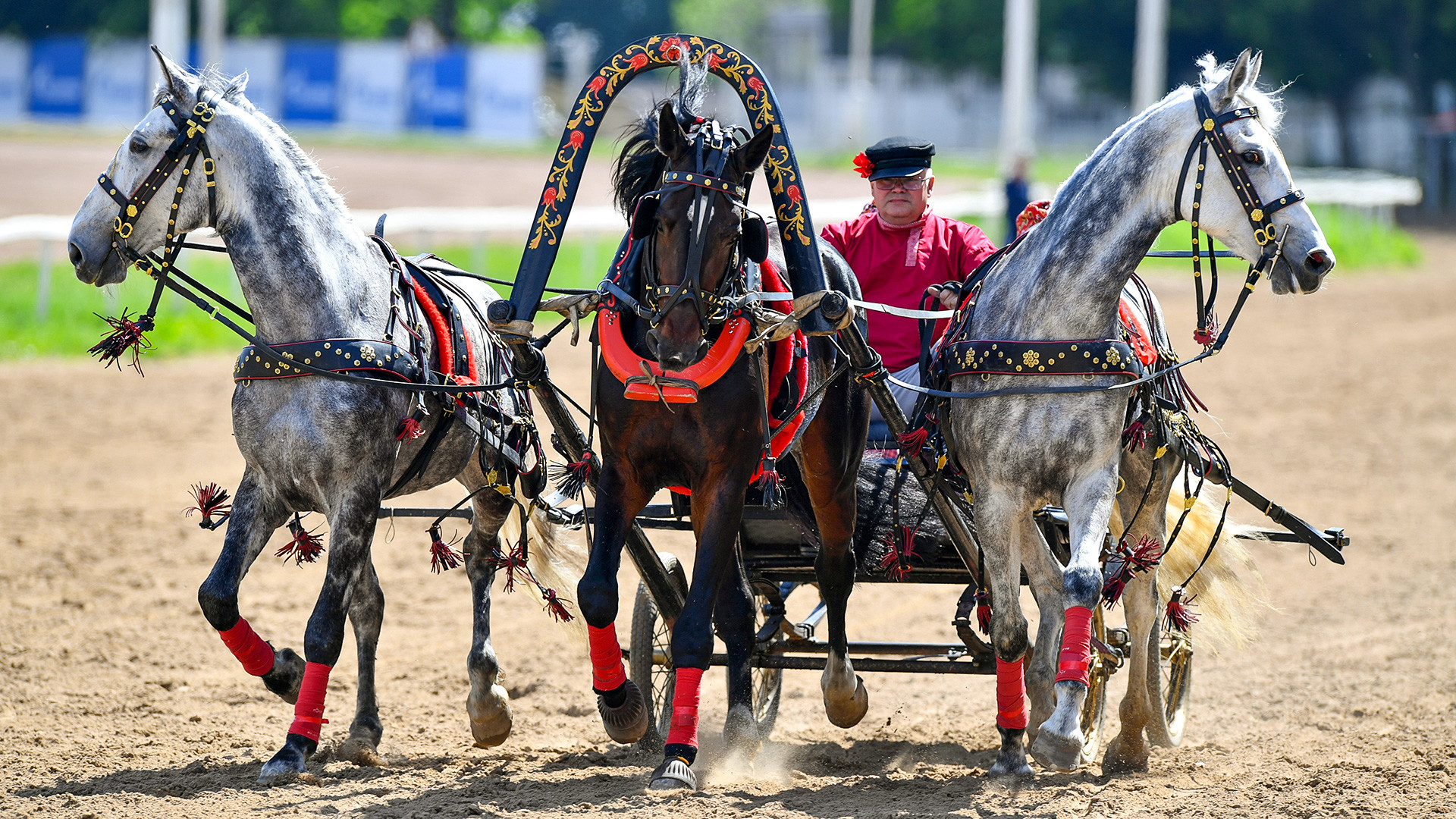 Mikhail Voskresensky/Sputnik
Why did Russians put three horses together in one harness? And how did the harnessed horses still manage to look in different directions?

The troika is a uniquely Russian way of harnessing a team of horses. It doesn't exist in the rest of the world, and it is the fastest! It’s a famous symbol of Russia on par with matryoshka dolls, balalaikas and winter frosts.

1. Only a car would be faster (if cars had existed then) 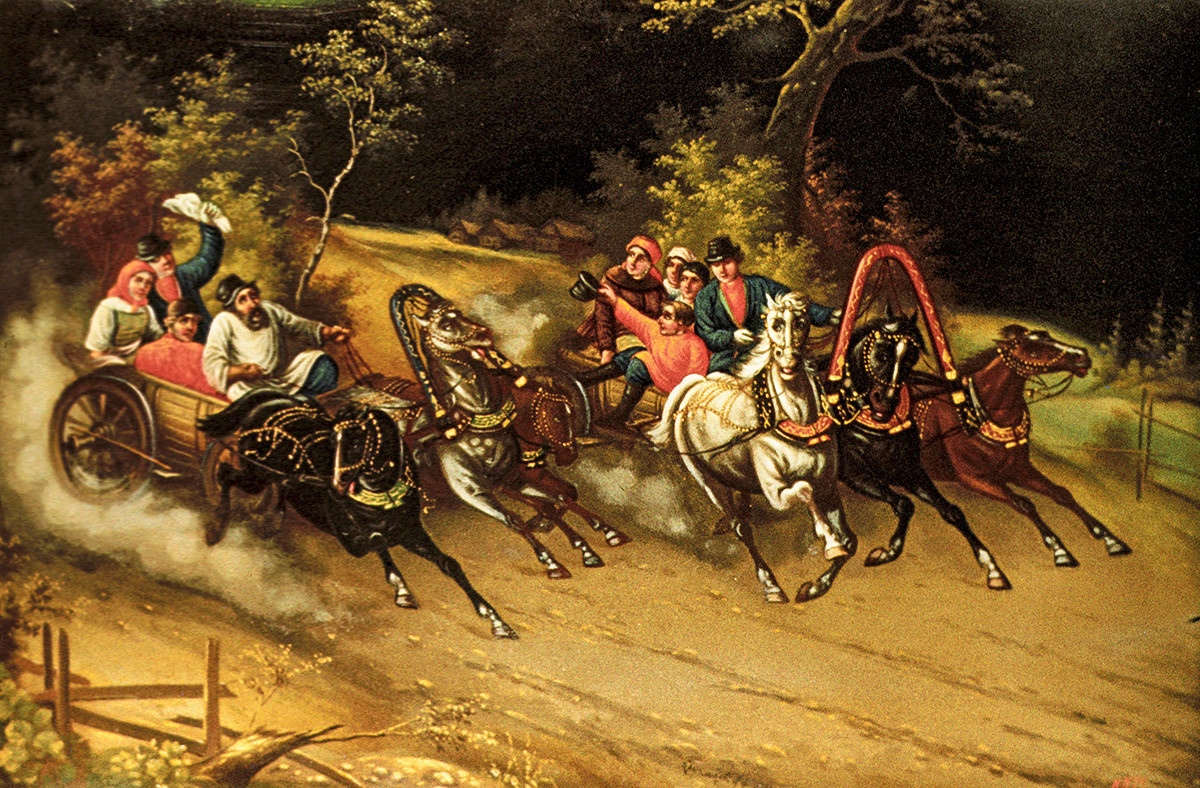 A Russian troika is a team of three horses moving at different gaits. The horse in the middle (the "korennik" in Russian) moves at a trot and has to be the biggest and strongest. The two trace horses on the sides ("pristyazhnyye") maintain a canter, taking the middle horse with them while growing less tired than they would on their own. Such a team of horses can cover vast distances at a speed of 45-50 kilometers per hour. Almost as fast as a modern car!

2. The horses look in different directions

If you look at a Russian troika on the move, you’ll notice one curious detail: The trace horses keep their heads turned sideways, while at the same time moving straight ahead. Why do they do this? The reason is that the horse harnessed on the right canters by leading with his left leg, while the one on the left leads with his right. And so they turn their heads in the opposite direction for balance. They do this instinctively (and that it looks so elegant is just an extra bonus).

3. The best troikas have horses of the same breed 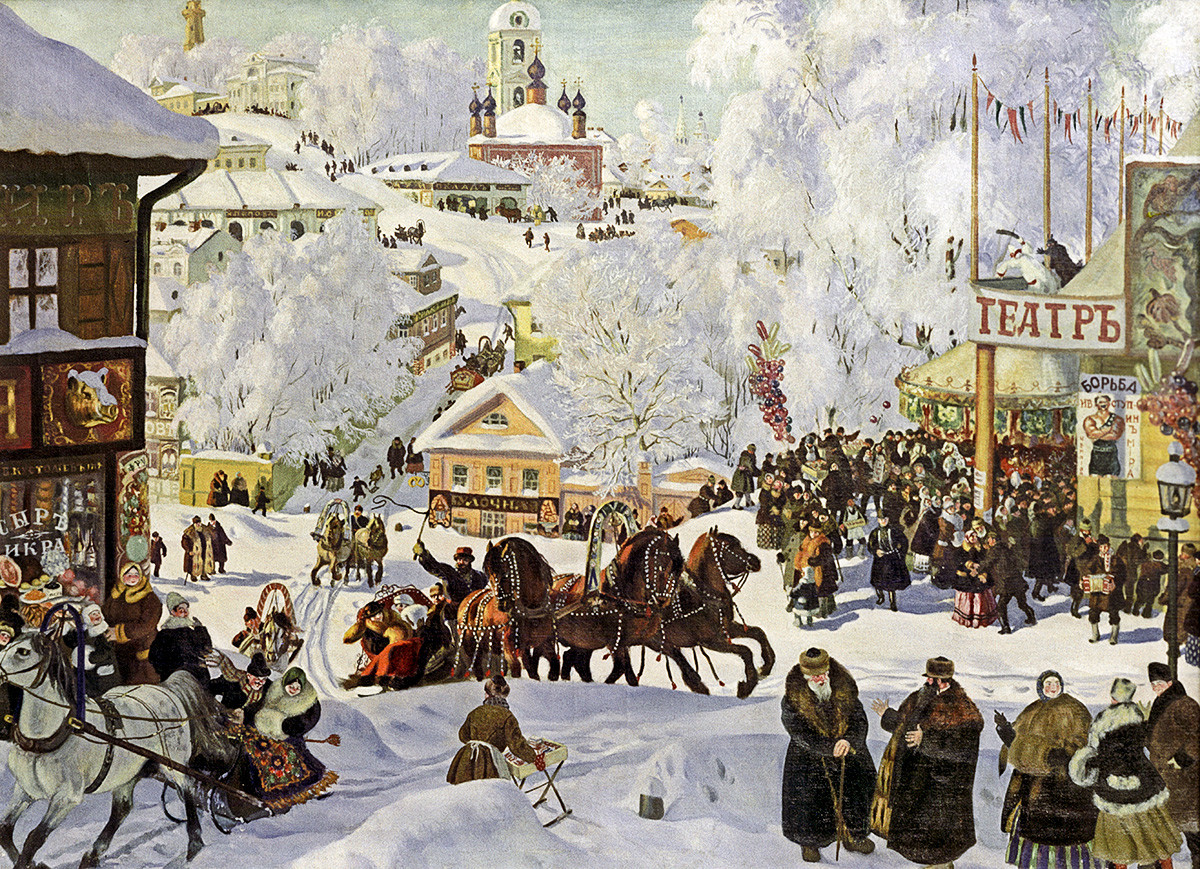 It is believed that the best troikas are pulled by trotting horses (breeds specially reared for speed) of the same type. At the same time, the horse in the middle must be larger than the other two. Vyatka horses, known for their endurance, are regarded as the most reliable, while teams made up of large Orlov Trotters are seen as the most prestigious.

4. Troikas were for three passengers 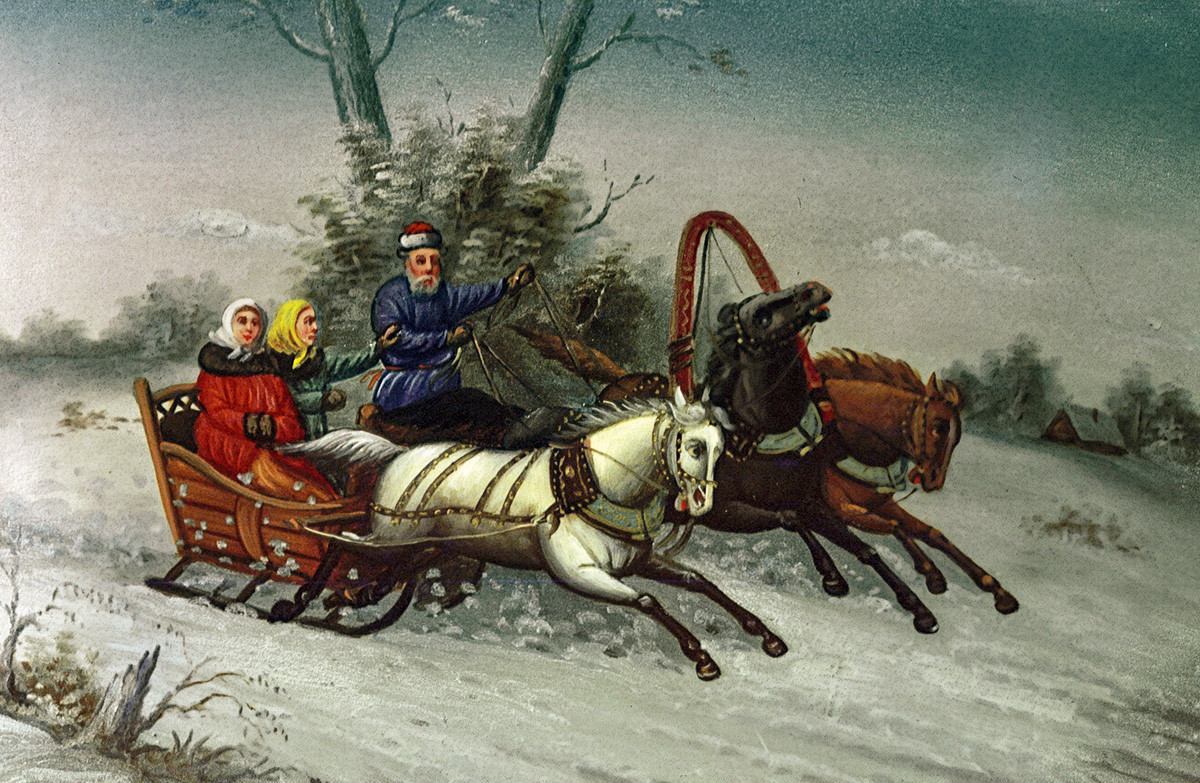 The word "troika" ("trio" in Russian) to describe a team of three horses came into use in the 18th century or, according to some sources, at the end of the 17th century. At the time, the number of horses would depend on the number of passengers and the cargo—a single horse would be sufficient for one passenger, but if more "horsepower" was needed more horses would be hitched one after another. But this way of harnessing horses didn't catch on in Russia due to the poor quality of roads (or rather the absence of roads altogether in many cases). But when horses began to be harnessed abreast—”to the side" as the phrase went—things improved.

5. We should thank the postal service for the troika (probably) 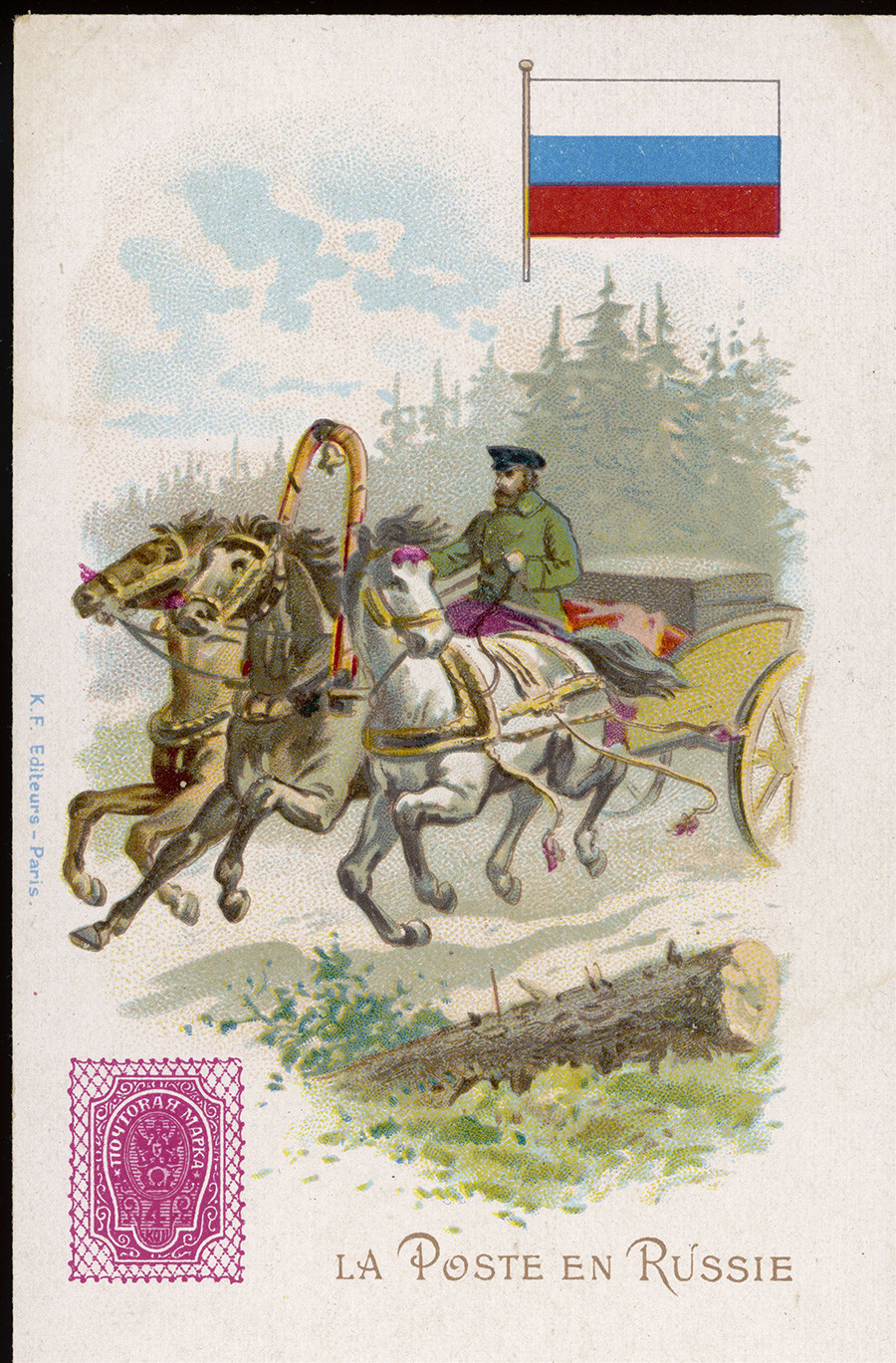 With three horses to draw his troika, the Russian postman can make his round in speed and comfort, circa 1900.

It is not actually known for certain who invented the troika or when. Most likely, the development of the postal service contributed to the emergence of the troika as a team of horses traveling at different gaits. In Russia, the distances between population centers are huge. Mail and freight deliveries took several days even between Moscow and St. Petersburg. And it could take weeks to reach other major cities, particularly when it was muddy during spring and autumn. Both endurance and speed were important for horses transporting mail. We do know that in the early 19th century mail coaches were already being drawn by troikas in Russia. Later, troikas came to be used for transporting couriers and passengers and also as expensive entertainment in villages and towns. For example, at weddings a wealthy peasant would consider it absolutely obligatory to hire a troika—and ideally not just one—to take his bride, family members and guests out for a ride. 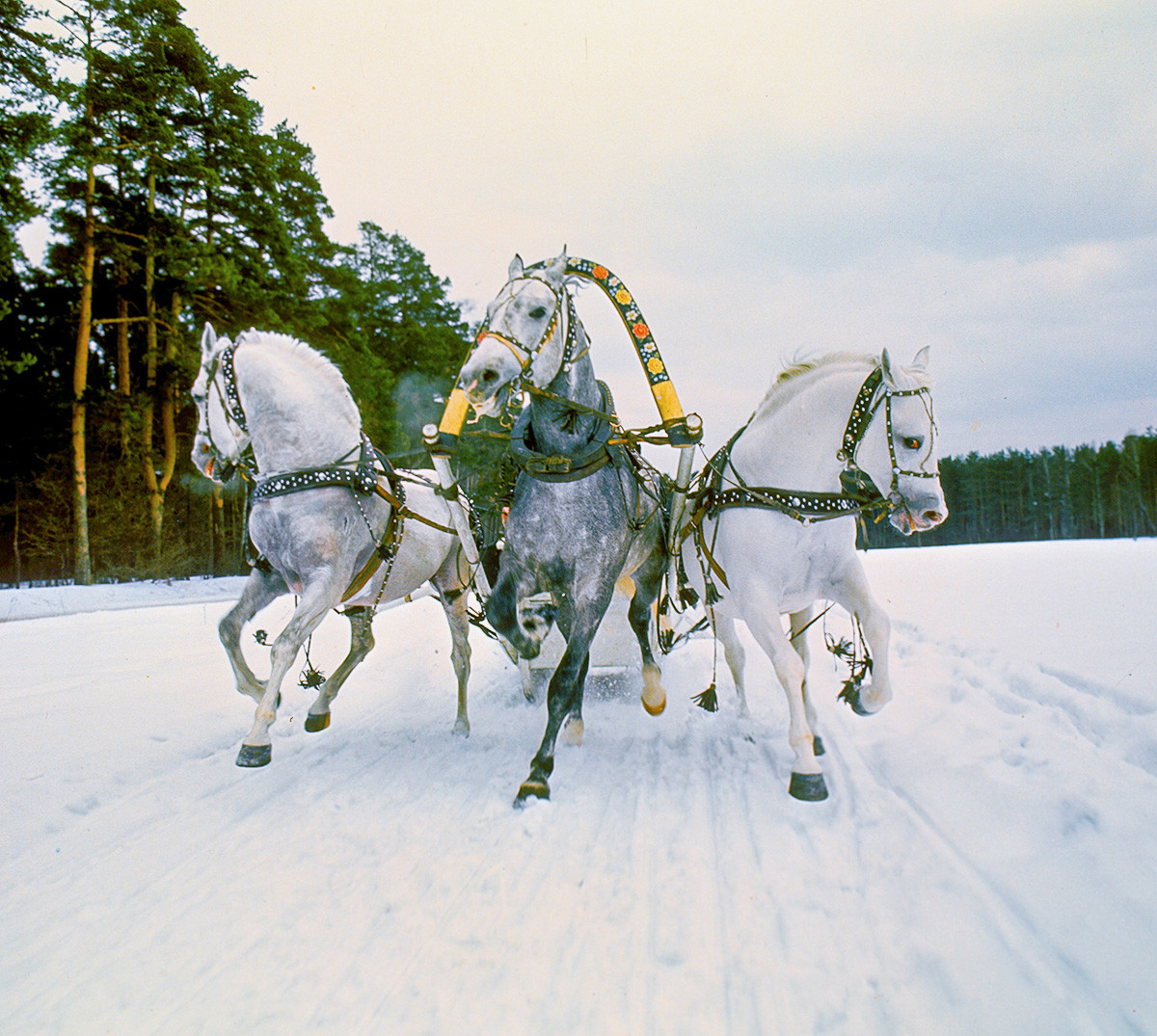 Nowadays, some car enthusiasts like to adorn their "iron horses" with spoilers, airbrush designs or halogen lights. In the past, before there were cars, coachmen customized their harnesses in a similar manner. They would paint the shaft bow of the horse in the middle gold or adorn it with decorative motifs or fancy carvings. In the mid-19th century, shaft bows inlaid with brass became fashionable, and several decades later it was the custom to decorate them with colorful ribbons. Coachmen believed that these adornments served not only aesthetic purposes but would also protect them against robbers and the evil eye.

7. Sleigh bells in place of a car stereo

"We rode on a troika with sleigh bells," goes the popular song "By the Long Road." Indeed, an approaching troika could be heard a kilometer away! Coachmen used the bells to make sure the road ahead was cleared in time for the troika to fly past while also alerting everyone that the mail was coming.

But then private owners of troikas developed a liking for the bells, and they began to be used not only by the postal service but also by anyone out for a drive. Of course, people driving around town with their bells ringing just for fun disrupted postal service operations, and so in the second half of the 19th century the government introduced a ban on private use of these types of bells. In response, private owners came up with the idea of using small bronze bells attached to leather straps and harnesses that produced a more delicate sound. The little bells were selected according to tone and, as a result, every troika provided its own musical accompaniment during a journey.

8. The fastest troikas on display 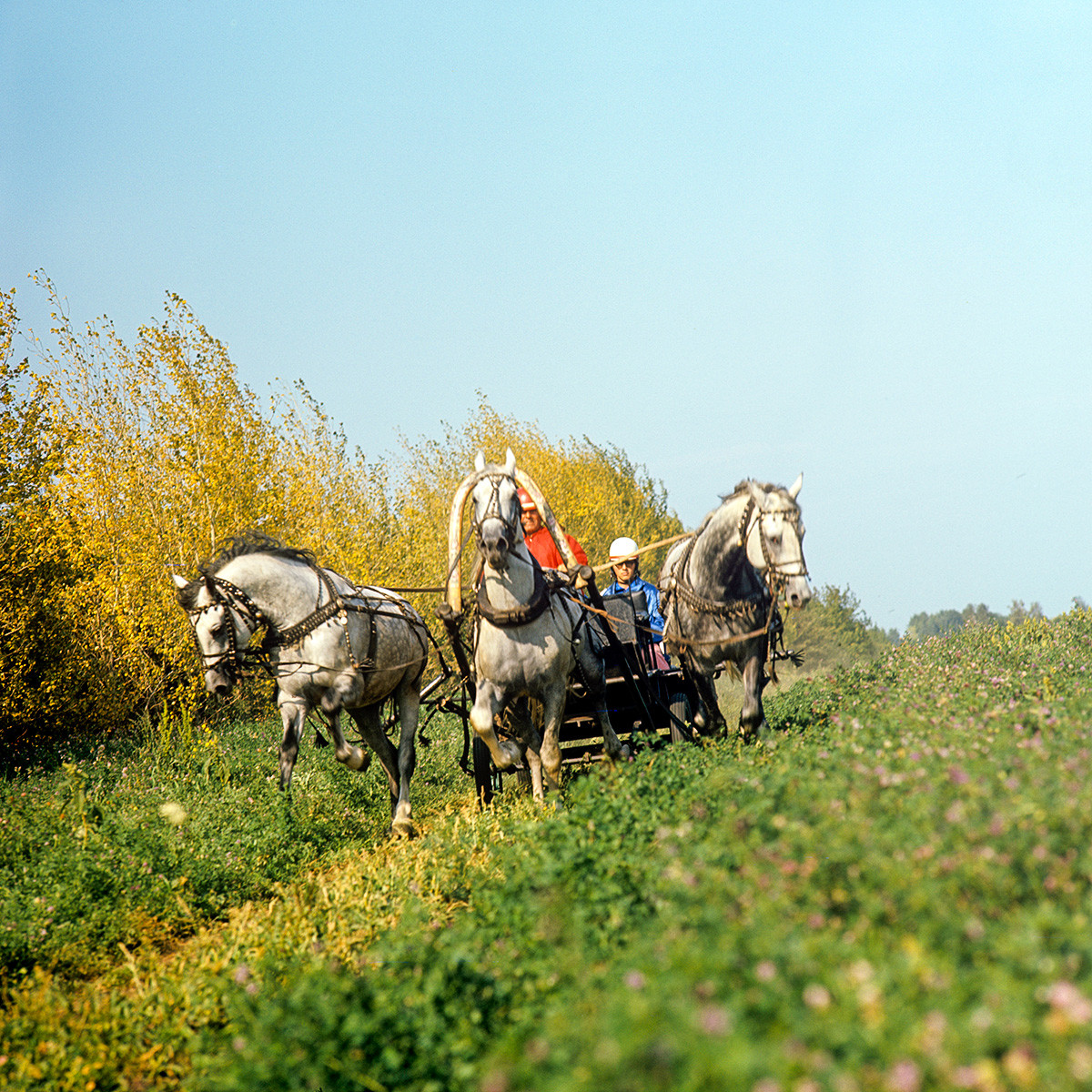 The first time a Russian troika was taken abroad was in 1911, when it was shown at a world exhibition in London. It consisted of an Orlov Trotter with Strelets trace horses. After this, Russian troikas became a constant feature at international exhibitions. The tradition continued into the Soviet period, but by then the troikas were mainly made up of stately Orlov Trotters.

9. You can still see troikas today 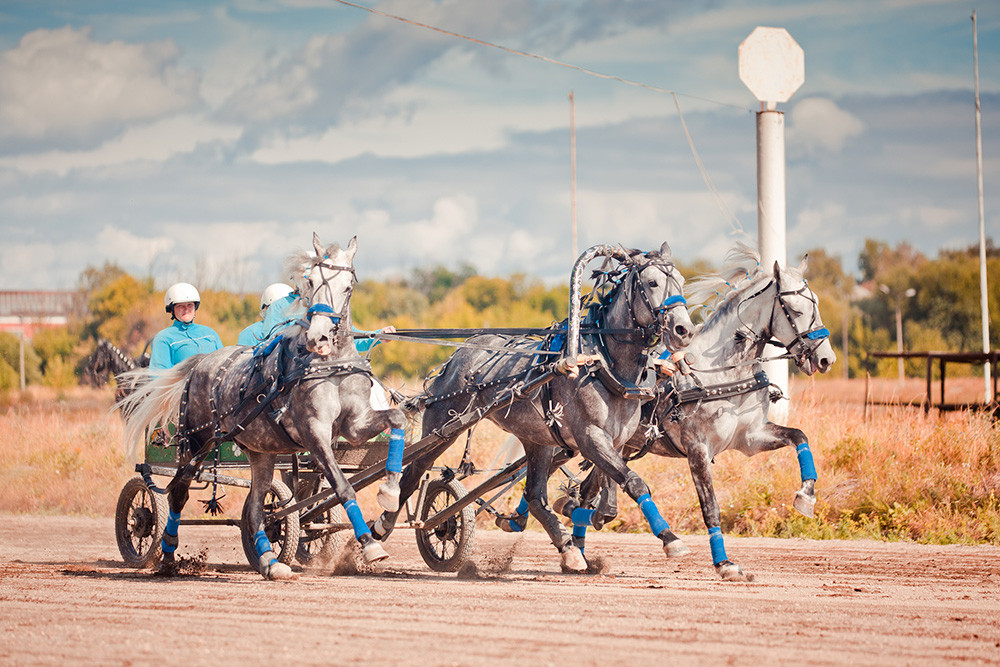 With the emergence of railways and then cars, the demand for troikas (and horse-drawn transport in general) declined. But they can still be seen today at sports competitions and special events in Russian tourist towns, such as Suzdal and Vladimir. From as early as the 1840s, troikas competed at the Moscow Hippodrome not only in speed races but also in dressage trials. In the mid-1990s, an annual Russia Cup competition for Russian troikas was inaugurated in several Russian cities. The finals are held in Moscow. 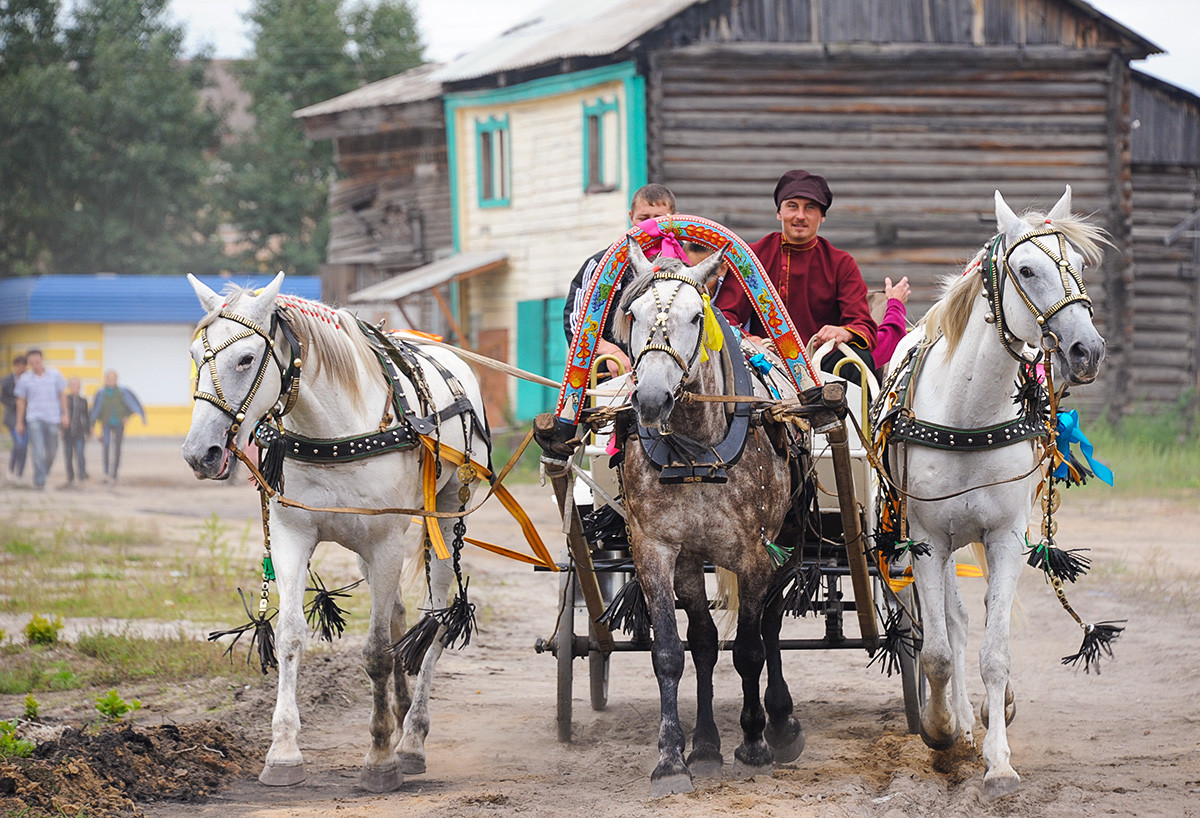 Troika riding during the city festival in Nerchinsk.

"Troika" is a Russianism: a word or phrase that isn’t translated into other languages and remains Russian. And it’s definitely become a key symbol of Russia! Countless paintings, poems, stories and songs are dedicated to the troika. The following passage from Nikolai Gogol's "Dead Souls" is regarded as the most famous example: "Russia, aren't you hurtling onward like a spirited troika that none can pass? The road smokes under you, the bridges thunder, and everything falls back and is left behind."

When you’re in Moscow, you’ll quickly notice that the travel pass for the transport system is even called a Troika card.