Why Russians called their monarch 'tsar' 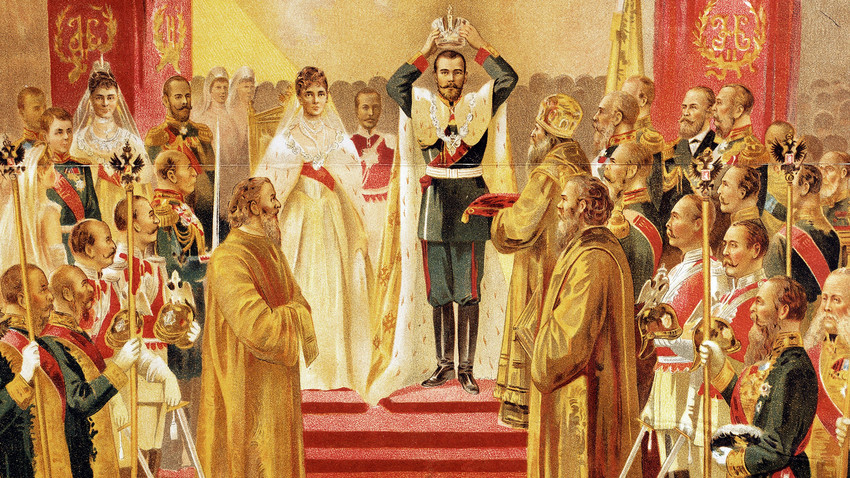 Getty Images
What is the origin of the word ‘tsar’? What did the idea of tsardom mean to the Russian people, and how were Russian monarchs crowned?

The word tsar is derived from the Latin title for Roman emperors - Caesar. It appears in Old East Slavonic in the 11th century. Russians called the Byzantine Emperor ‘tsar’. It was also used to refer to Biblical and ancient kings.

However, Russians didn’t call foreign monarchs tsars – even ironically. They were referred to, accordingly, as kings, queens, emperors, sheikhs, Maharajas and the like. Russian rulers also adopted the ‘Emperor’ title in 1721 (the first Emperor was Peter the Great), but they continued to be referred to as tsars.

The Grand Prince of All Rus, Ivan the Great (1440-1505), named himself ‘tsar’, ‘imperator’ and ‘keyser’ in diplomatic correspondence. Ivan’s son, Vasiliy III, who in 1514 was officially recognized as an emperor by Holy Roman Emperor Maximilian I, continued to use his father’s titles. However, the first formally crowned tsar was Ivan IV ‘The Terrible’ (1530-1584). 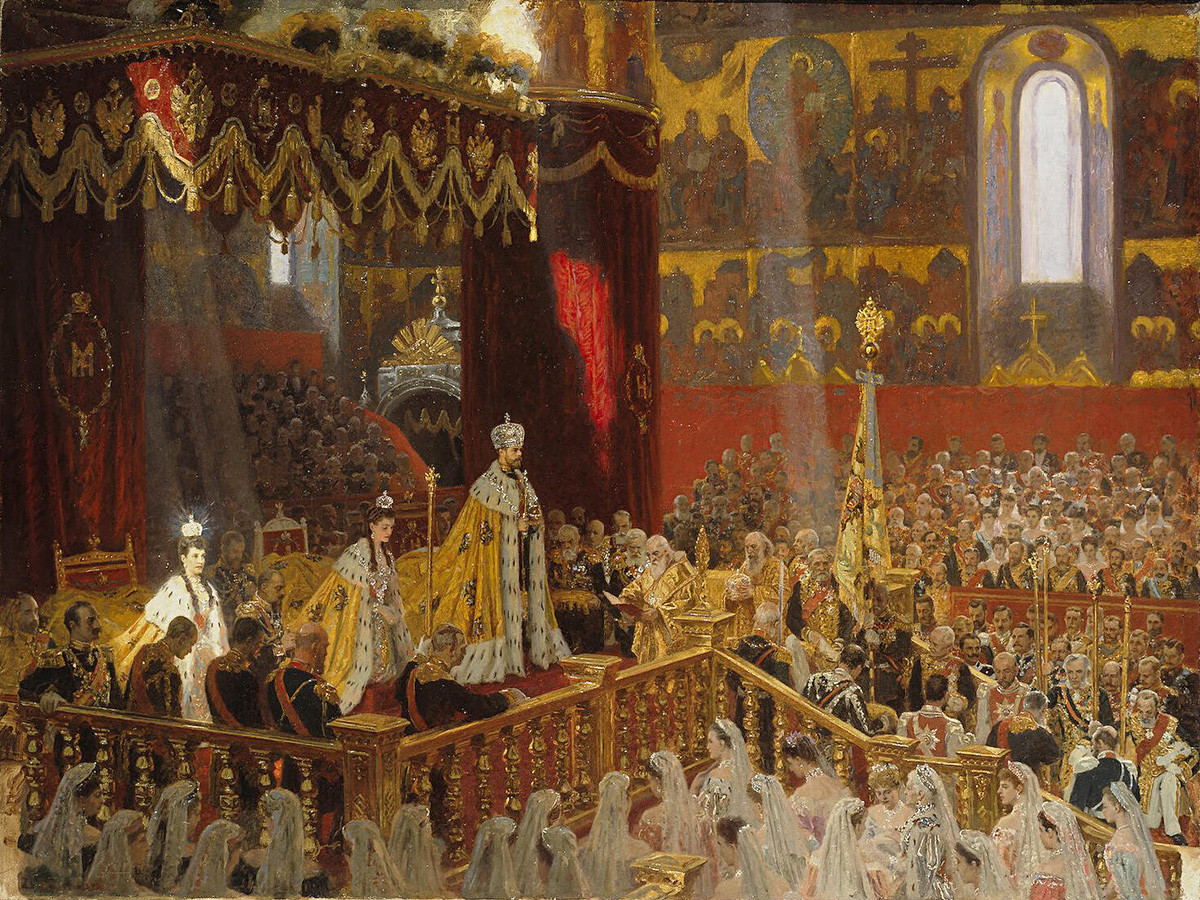 Despite ‘tsar’ being derived from ‘Caesar’, the tsar’s title carried different symbolism – an Orthodox one. During the coronation ceremony, they would be anointed for tsardom – the priest would perform chrismation on the monarch, making the sign of the cross on the monarch’s forehead, eyes, nostrils, mouth, ears, breast and both sides of each hand with the chrism (also referred to as myrrh). 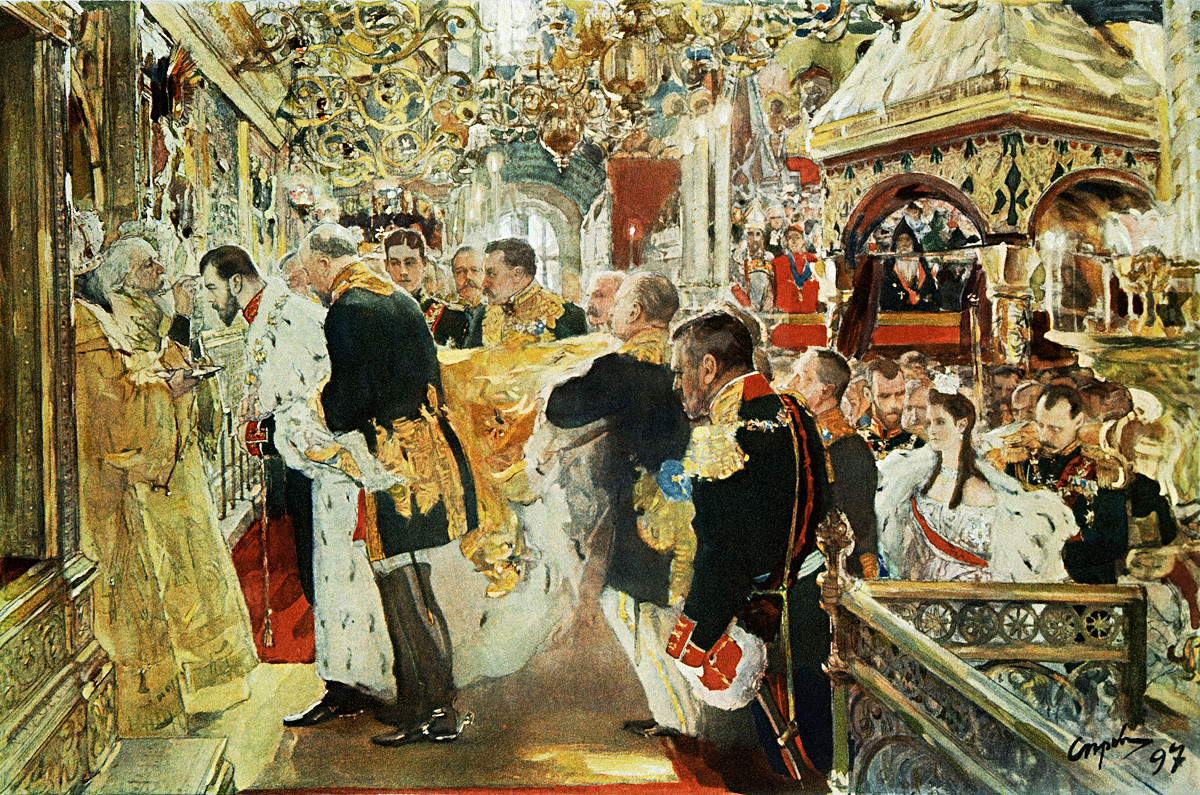 From then on, tsar would be a unique person: part layman, part priest. He would be the only layperson who could pass through the Royal Doors in the church and be present on the altar with the priests, and which would only happen during his anointment. That shows that being a tsar is a great struggle and mission, likened to the priesthood. Russian Orthodox people believed that sacred and secular, church and state are welded together in a unique person of the tsar, who is called upon by God to be ‘wedded’ to his tsardom and its people.

Coronation of the tsar 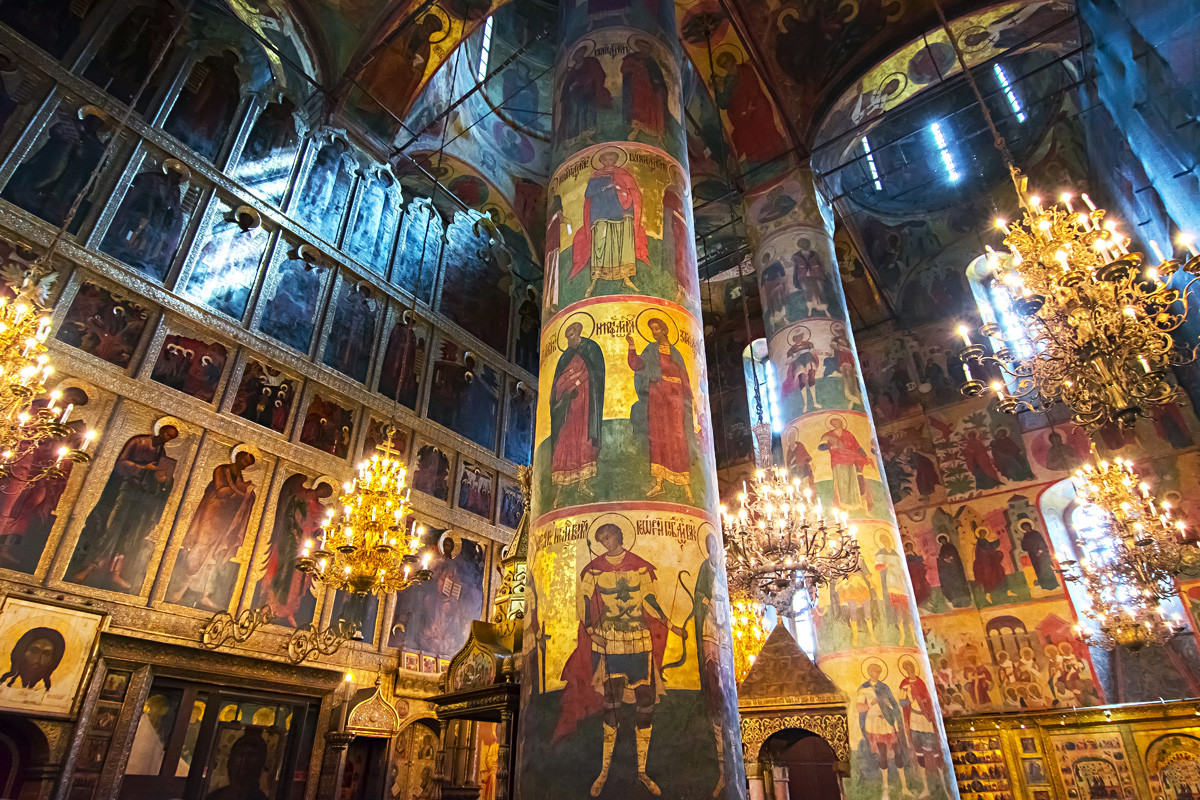 The interior of the Dormition Cathedral, Moscow

In Russia, the new ruler took all the tsar’s privileges and responsibilities immediately upon his accession to the throne. The coronation, which needed to be prepared thoroughly and was very, very expensive, took place later, often even a year after accession. 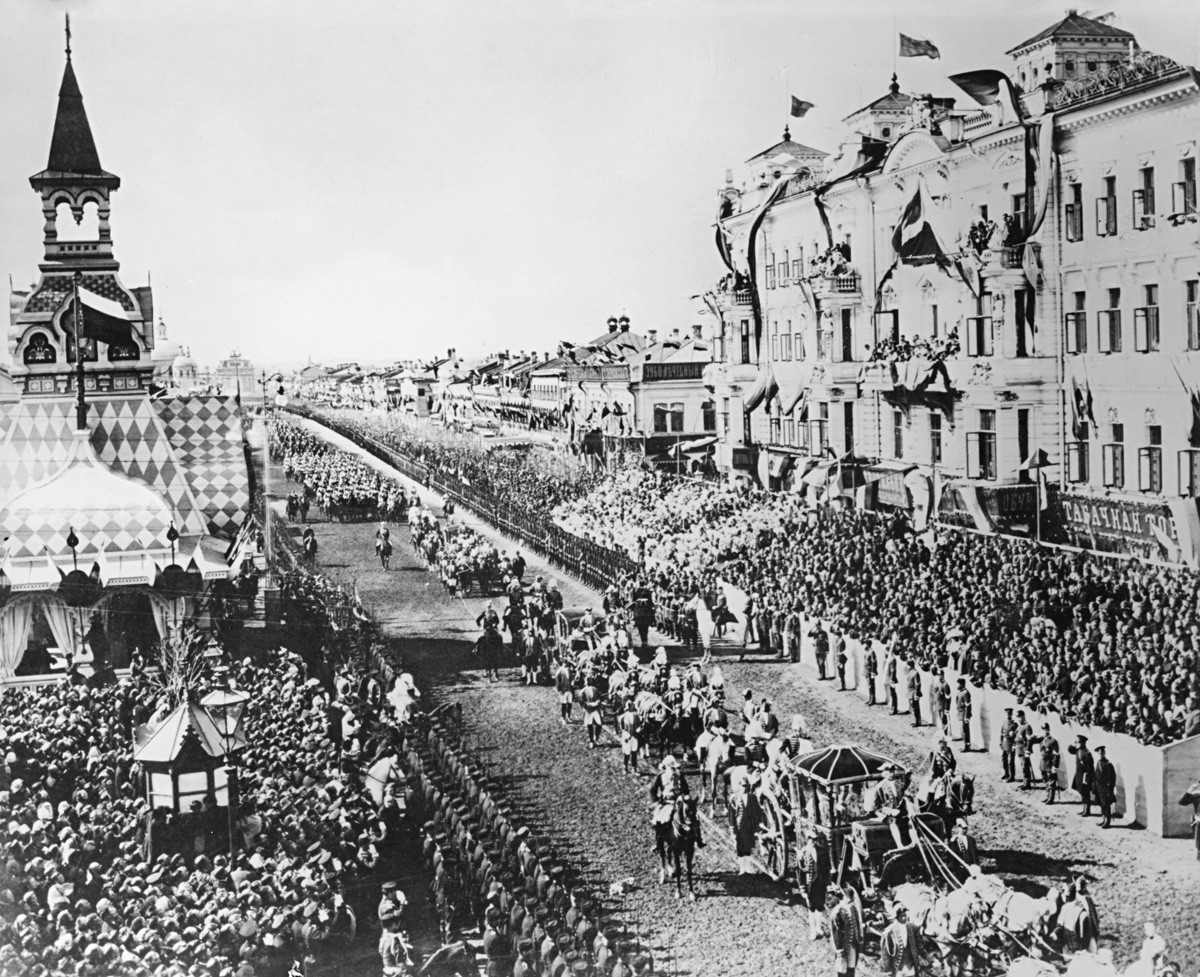 The coronation procession in 1896

Russian coronations took place in Moscow. The ceremony was huge, long, lush with luxury and took place in the presence of the top of the tops of the Russian nobility. Tsar (and his consort – tsaritsa, if there was one) proceeded from the Red Porch in the Moscow Kremlin to the Dormition Cathedral. There, the tsar was anointed by Russian Patriarch, but the tsar placed the crown upon his head himself because the strict prerequisite of the ritual was that the tsar shall not bow down before anybody, even the foremost priest of the Orthodox church, the Patriarch. 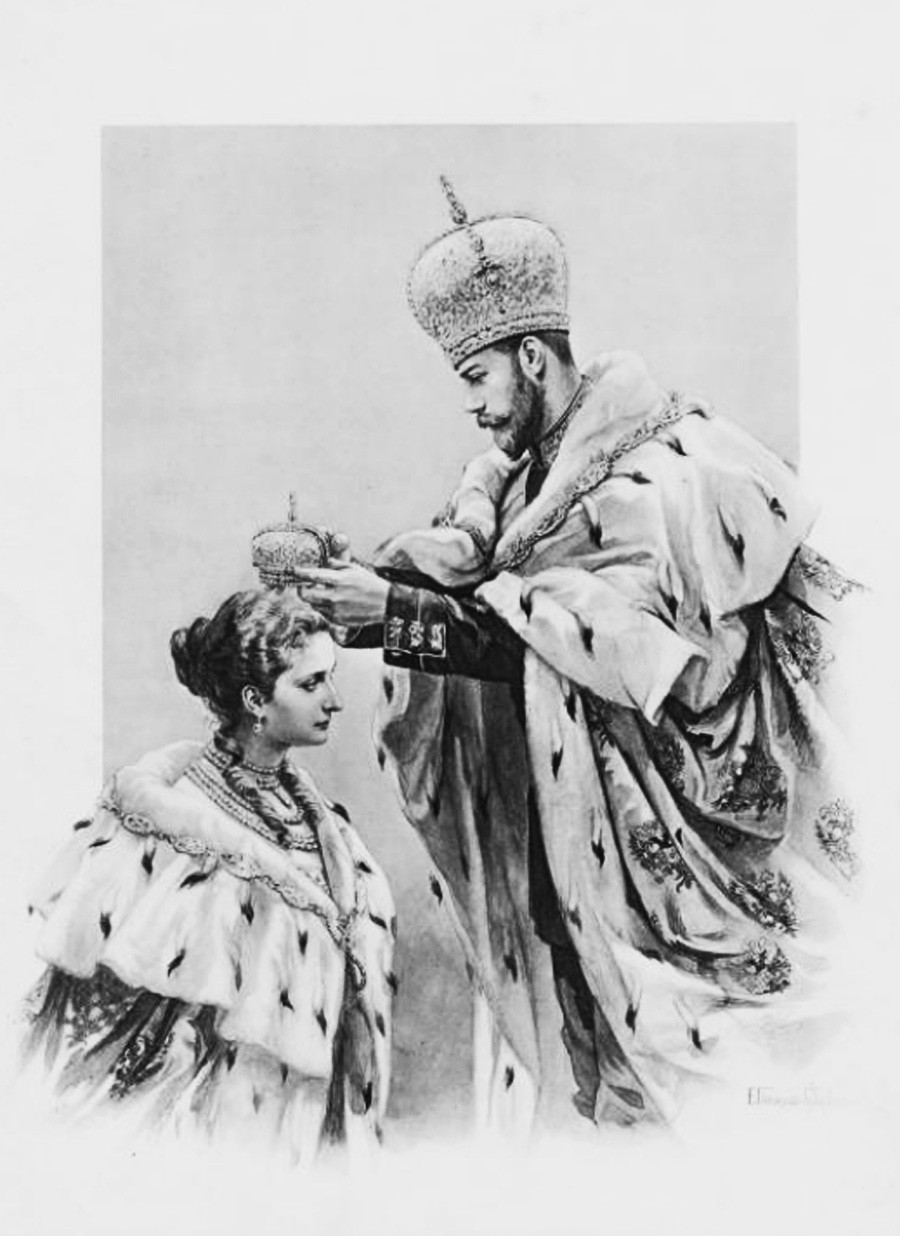 After his own crowning, tsar as the carrier of the tsardom seats himself on the throne and crowns his wife with his own crown briefly and then places her consort’s crown upon her head. During this, his wife kneels on the cushion beside his throne. 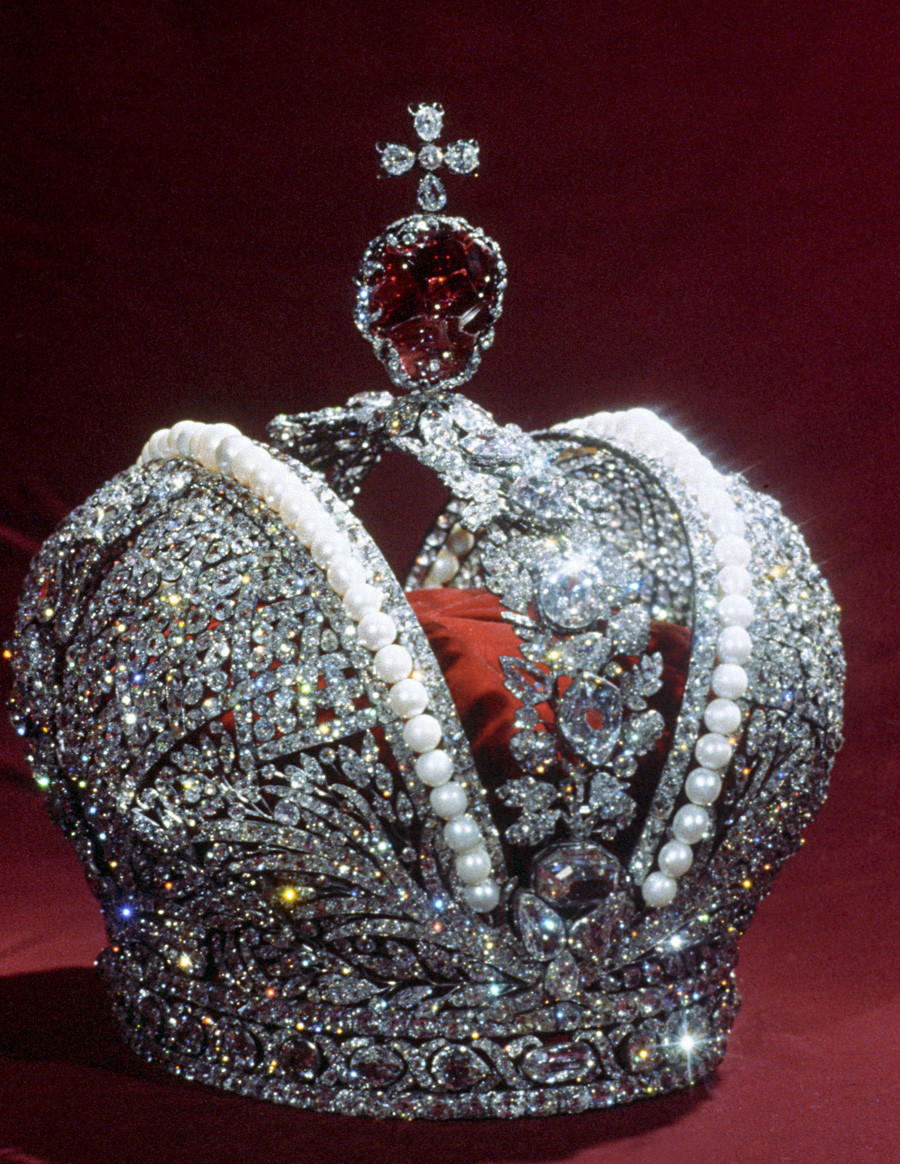 The tsar and tsarina are then anointed and receive the Holy Communion. The Tsar partook of the bread and wine separately, in clerical fashion. This was the only time the Tsar, or any Orthodox layperson, was ever permitted to receive communion in this manner. Then the tsar said the coronation oath in which he swore to preserve the autocracy intact and to rule his realm with justice and fairness. 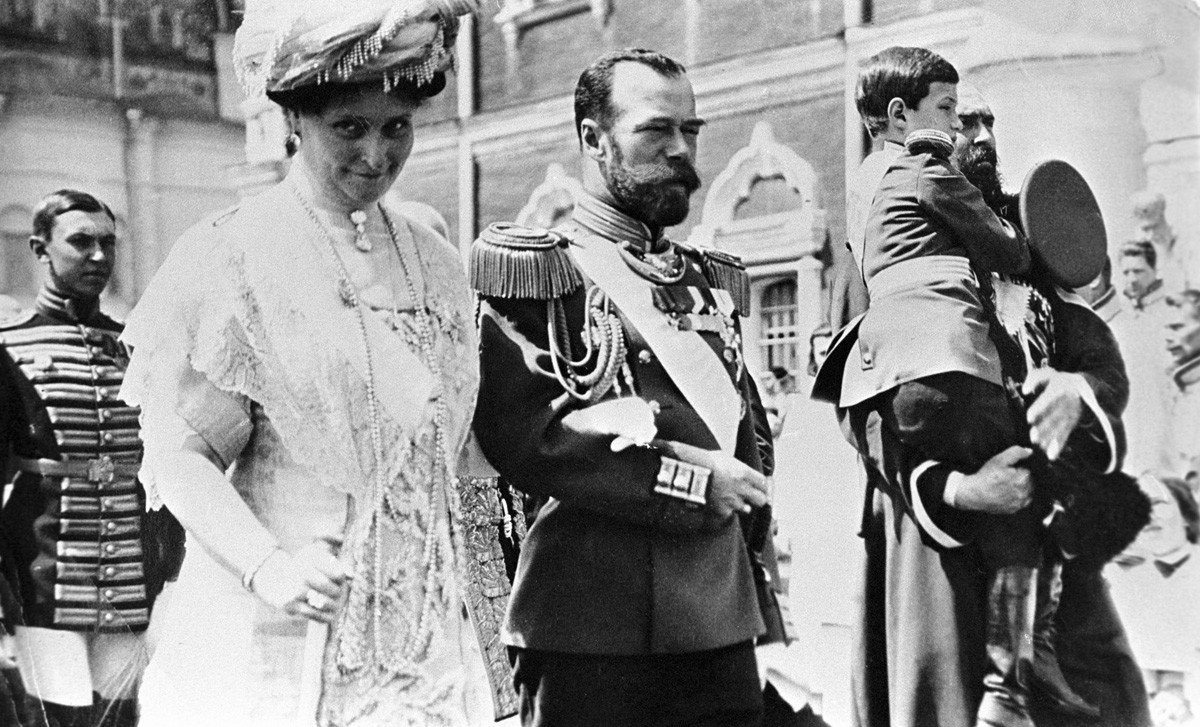 Through all the proceedings, many prayers were said and symbolical ceremonies performed, including handing in of the imperial regalia – the Imperial Crown, scepter and orb, and the banner of state. After the coronation, mass celebrations followed. Fines and taxes were temporarily diminished, prisoners pardoned, and a three-day national holiday was proclaimed.