‘The Crown’ Season 5 on Netflix: Fact and fiction in the ‘Russian episode’ 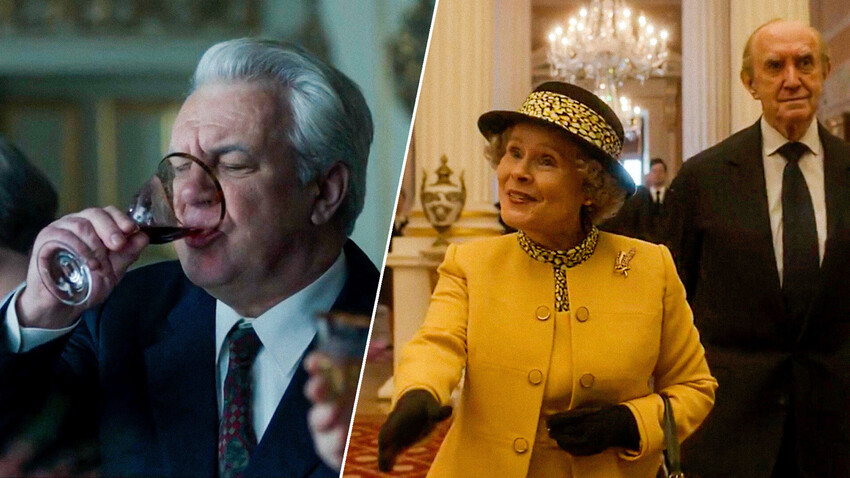 Peter Morgan/Netflix, 2022
A key episode in the new season of ‘The Crown’ - ‘Ipatiev House’ - dwells on the centuries-long relations between Britain and Russia. Here is our account of what is true in it and what is simply artistic invention, something the current season is particularly good at.

FACT: Blood ties between the Royal Family and the Romanovs

Episode 6 of ‘The Crown’ Season 5 begins with the execution of the Romanov family, a fate the Windsors could easily have saved their relatives from. Scenes from 1918, in which everyone speaks pretty good Russian, are intercut with the king out hunting. It was the king’s consort, Queen Mary, as not only the makers of the film but also some historians believe - who took the decision not to send a ship to rescue the Romanovs. Nicholas II and George V were first cousins and even looked alike. Consequently, Elizabeth II, the granddaughter of George V and particularly her consort, Prince Philip, great grandson of Nicholas I, were very wary about relations with Russia and regarded the Soviet authorities as “regicides”, which is why, during her entire reign, Elizabeth II never once visited the USSR.

The latest season of ‘The Crown’ covers the first half of the 1990s, when the Soviet Union collapsed and democracy, ushered in by Boris Yeltsin, took the place of communism. It was after the collapse of the USSR and the emergence of an independent Russia that the queen paid her first visit to Moscow and St. Petersburg. It was a historic visit in every sense. She was the first British monarch to come to the Russian state. The queen’s program included all the main sights of Moscow and St. Petersburg, as well as the opening of a special museum dedicated to British history, but this was not included in the series.

In ‘The Crown’, Elizabeth II visits Russia entirely for personal reasons - she wants to reconnect with her husband, Prince Philip, who, inspired by family links with the Romanovs, had become increasingly immersed in the Orthodox faith and his Slavic roots. According to the series, the Royal couple visit Moscow exclusively for the burial of their ancestors. Prince Philip’s DNA was indeed used for the scientific examination of the remains of the Romanovs, but this was more a consequence of, rather than the reason for, the Royal visit. The interment of the bones discovered in the Urals only took place in the late 1990s, although the forensic tests - involving both Russian and British experts - continued until the 2010s.

Read more: How did Tsar Nicholas II become a saint?

FICTION: A drunken Yeltsin on a tank, on a table and in Buckingham Palace

The chronology of ‘The Crown’ season 5 is its weakest element. For instance, Elizabeth’s wish to meet Boris Yeltsin (played by Belarusian actor Anatoliy Kotenyov), the leader of a newly-democratic Russia, arises almost immediately after she sees him on a tank near Moscow’s White House. At the same time, Prime Minister John Major tells the queen that the Russian president has long gone mad and has sunk into alcoholism, to the soundtrack of ‘Kalinka Malinka’, but this does not prevent the queen from receiving Yeltsin and his wife in her palace and then agreeing to a return visit to Moscow. In reality, Yeltsin never went to Buckingham Palace, although his meeting with Major did take place, while his alcohol problems did catch up with him a certain time after his audience with the queen.

FACT/FICTION: Tchaikovsky, Dostoevsky and the decline of the monarchy

Season 5 of ‘The Crown’ has turned out to be the most intimate of all and the “Russian strand” has played no small part in this. In the very first episode, Prince Charles - the sole member of the Royal Family willing to take a fresh look at the monarchy - listens with interest to a radio report on the collapse of the Soviet Union, while Elizabeth’s ill-starred sister, Margaret, gets ready for a ball to the theme from Tchaikovsky’s ‘Swan Lake’. This foreshadows Diana’s meeting in the final episode with the Al-Fayed family, which is to play a baleful role in the subsequent season. “One of the most memorable accounts of a long, successful marriage comes from Dostoevsky’s wife, Anna. She and Fyodor were, she said, of… contrasting character. Different temperaments. Entirely opposing views, yet they never tried to change one another,” John Major tells the queen. It’s a pity that the House of Windsor took a different route.