How the first cartoon in Tsarist Russia was filmed (VIDEO) 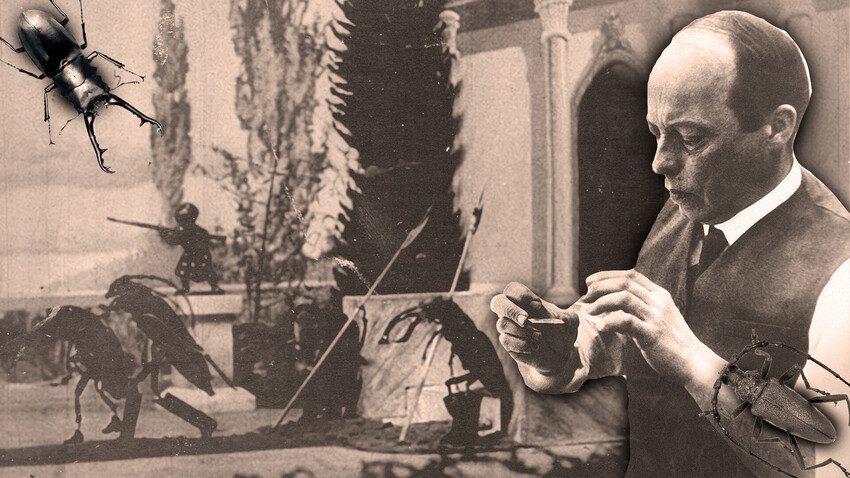 Russia Beyond / Anton Romanov (Legion Media, Public Domain, A. Khanzhonkov & Co)
Crowds of people flooded movie theaters for several years straight, amazed by what unfolded on the screen before them. Let’s see how a love story about bugs became the leading animated cult hit in the days of the Russian Empire.

Russian animation had no official birthday until recently, when.  Russian Animation Day was established on April 8. On this day, more than a century ago, the first Russian cartoon - ‘The Beautiful Leukanida’, by Ladislas Starevich - was produced. The ten-minute piece about a bug love story, in which the main roles were played by real insects, generated real buzz. This was one of the world’s first 3D-cartoons and it totally captivated the audience.

Cervus, the king of the stag beetles, holds a spectacular ball in his castle. Count Heros from the tribe of the longhorn beetles is his most honored guest. But, seeing the beautiful Leukanida on the throne next to the king, the count falls in love. He dares to confess his feelings to Leukanida when they retire to the castle garden. But at this very moment, they’re caught by Cervus; a battle ensues, in which the king of the stag beetles suffers a defeat. Leukanida throws herself off a cliff in desperation, but survives the fall. She retires to Heros’ castle, and the lovers enjoy their brief peace. But Cervus is bent on revenge and goes to war against Heros. This time, he has the upper hand. But not to let Leukanida fall into his enemy’s hands, Heros takes a desperate step – he blows himself up, along with Leukanida and Cervus’ entire army. 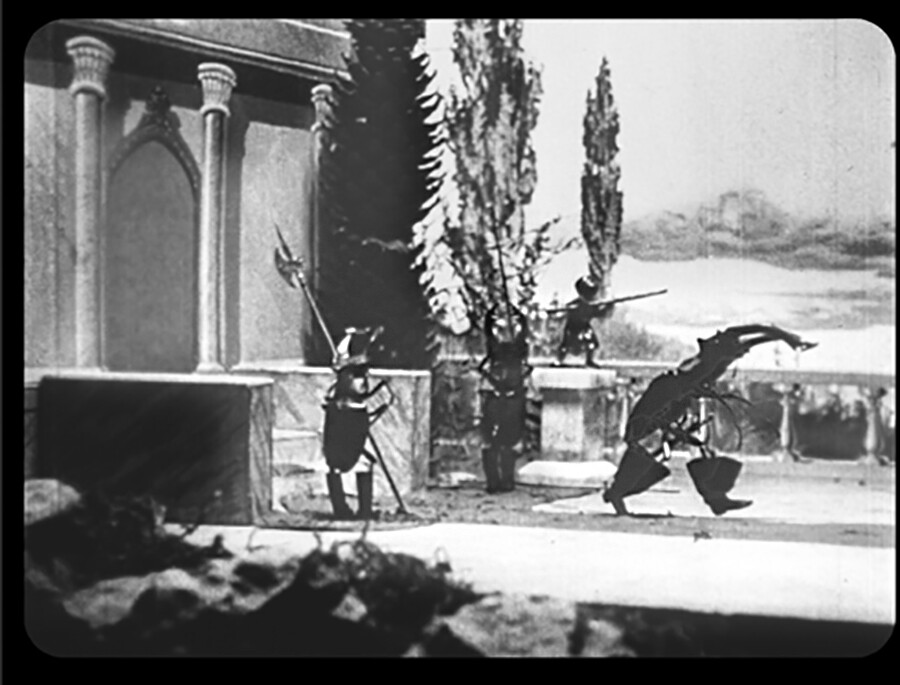 This simple story was, back then, perceived by the viewer as a parody of the popular genre of  “high society love tragedies.” As such, the bug love story became a blockbuster.

“It was a bombshell, a sensation. Crowds of people in Russia flocked to watch Leukanida,” Nikolay Izvolov, a film historian, says. The journalists of the time, in all seriousness, praised Starevich for his brilliant successes in insect training.

The cartoon also became a sensation overseas. Vestnik Kinematografista (“The Cinematographer’s Gazette”) wrote in 1912: “We heard from the most reliable sources that the film sold more than a hundred copies, which in itself speaks of the quality of this piece...” 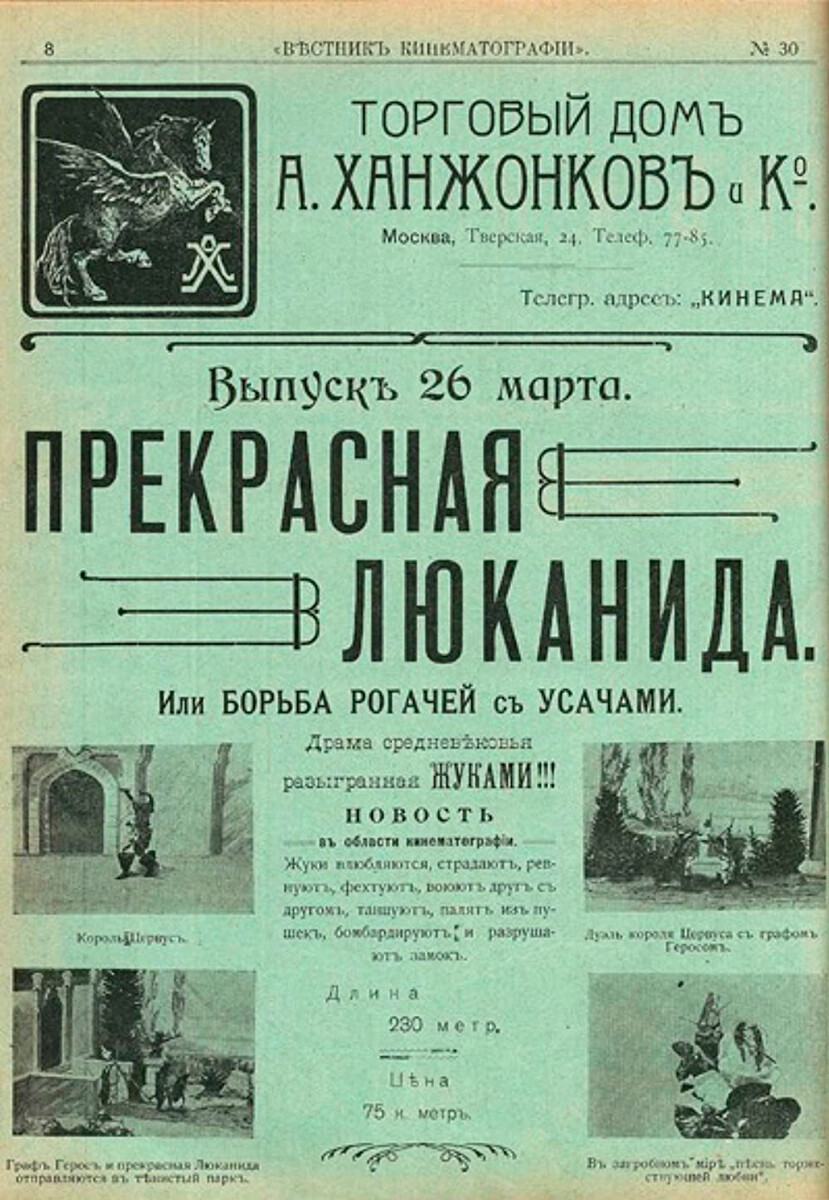 In reality, all the bug “actors” were already long dead and dried by the time filming started. Director Ladislas Starevich was fascinated with beetles since childhood and had a collection of dried bugs. He directed his first film in 1910. Initially, it was supposed to be a documentary about the life of beetles, but the insects grew passive due to the film lighting. This led to the director producing a frame by frame story involving dried Lucanus Cervus beetles (the scientific name of the stag beetle) instead. The film, however, was sadly lost. 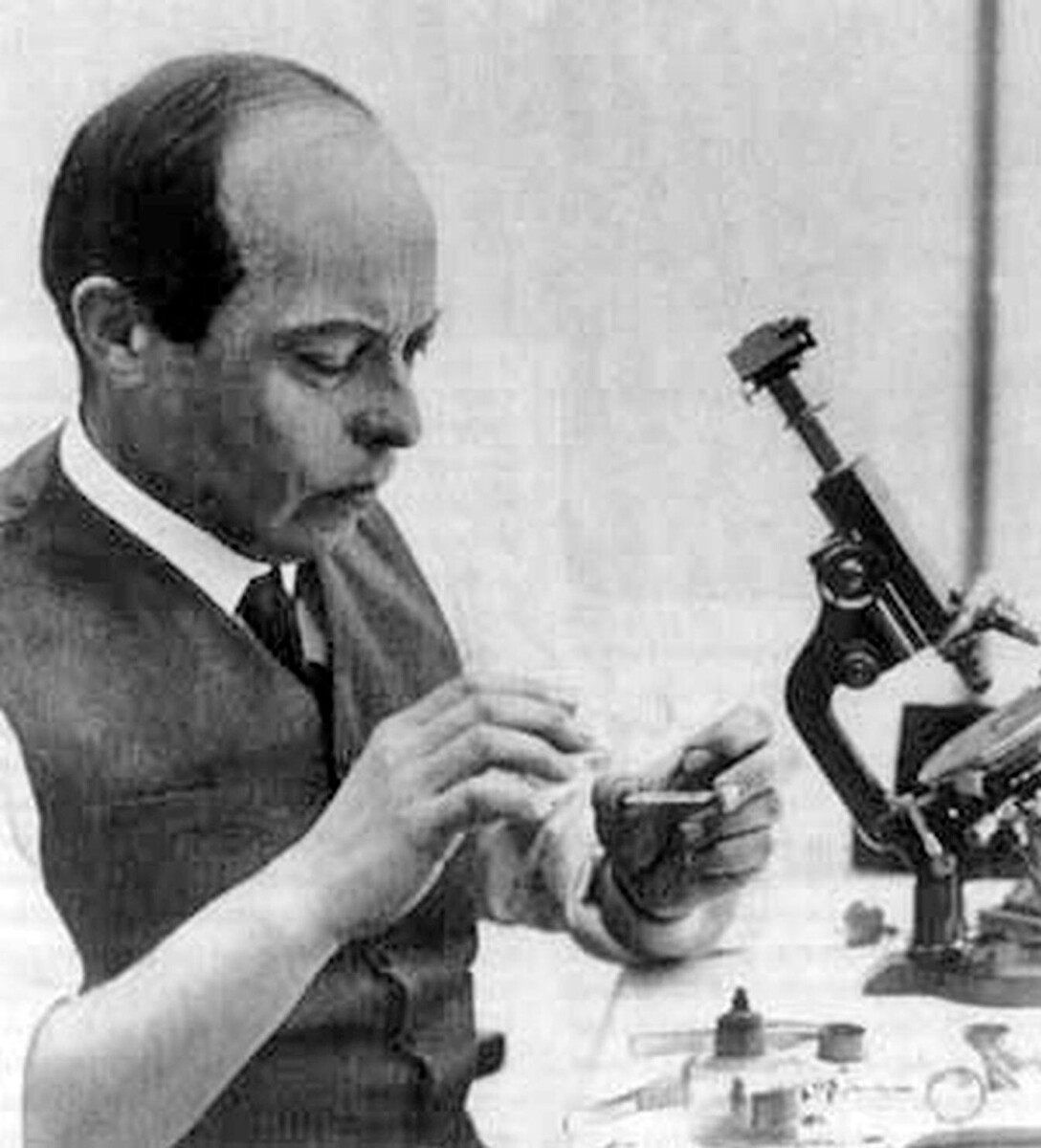 His second movie, made using the same technique (and ‘cast’), was ‘The Beautiful Leukanida’. He described his work on the cartoon in the following way: “Naturally, first, an insect should be properly prepared. It’s not too hard to pass a thin wire through its legs, gluing it to its body with wax. I made the ‘battlefield’ with modeling clay to have a foundation that could hold an insect’s legs in place. There was no difficulty with the insects’ movements. Having thought out the future battle of the horned beetles, I prepared some basic poses. Every movement during filming was broken down into several phases. I set the light for each frame.”

The movie was silent and had no captions; instead, it was supplied with a detailed description so the viewer could understand what was happening on-screen. It was read aloud by narrators at every showing. The film ran well into the 1920s.

After the Revolution, ‘The Beautiful Leukanida’ was renamed ‘A Courtesan on the Throne’ – with theBolsheviks no doubt wishing to denounce the unfaithful bug queen...