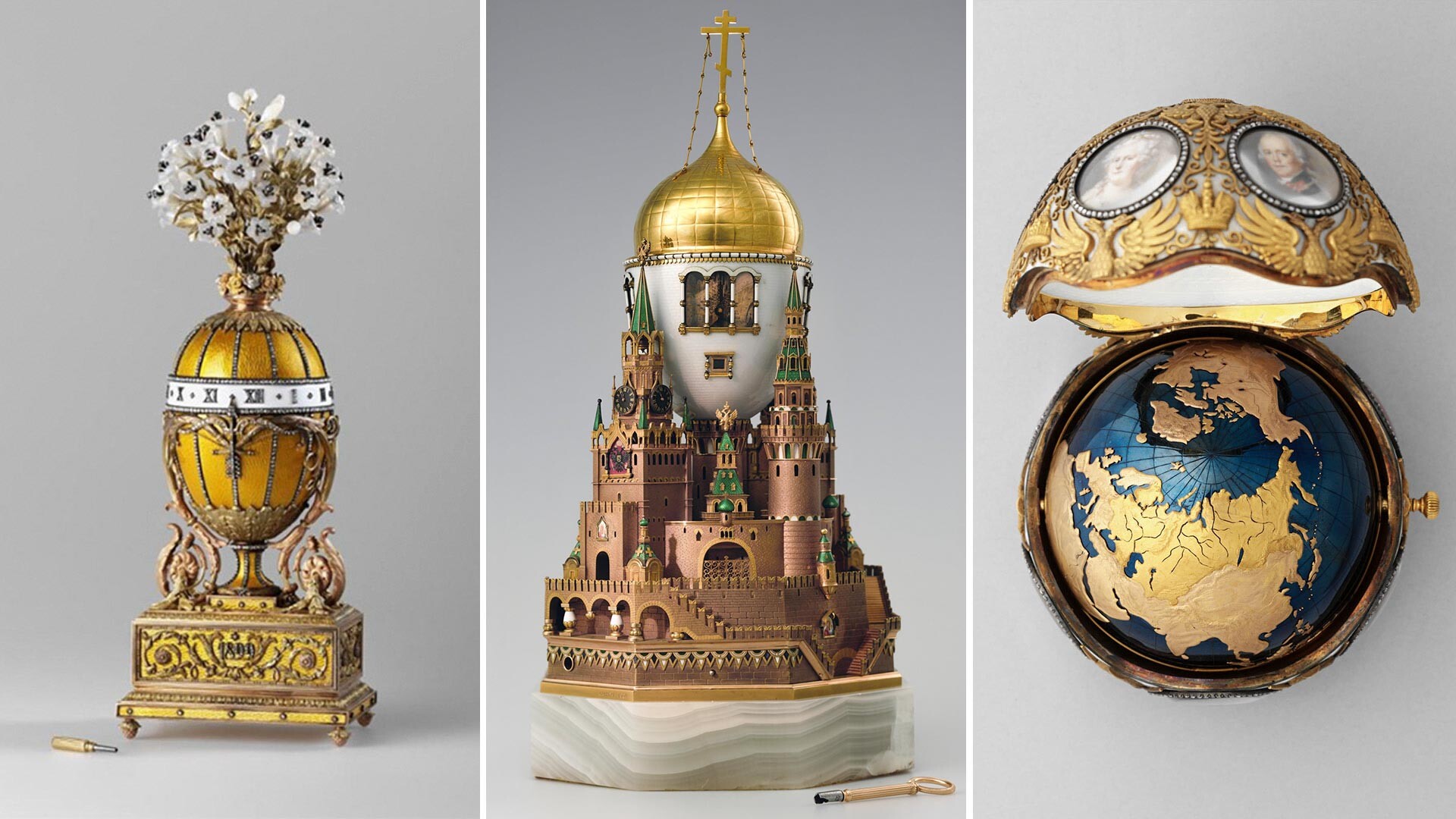 Moscow Kremlin Museums
These unique Easter gifts were commissioned by the last Russian Tsar for his wife and mother, and are now recognized as masterpieces of the jeweler's art.

In 1885, Emperor Alexander III was the first to commission a precious Easter egg from jeweler Carl Fabergé, and he presented it as a surprise gift to his wife, Empress Maria Feodorovna.

His son, Nicholas II, continued the tradition - every year he gave them as presents not only to his mother but also his spouse, Alexandra Feodorovna. In total, the House of Fabergé made 52 eggs for the Imperial Family. After the 1917 Revolution, many were sold abroad by the Bolsheviks and today can be found in different museums around the world. However, some have been lost. As for these 10 masterpieces, they remained the property of the Russian state and are now part of the collection of the Moscow Kremlin Museums. 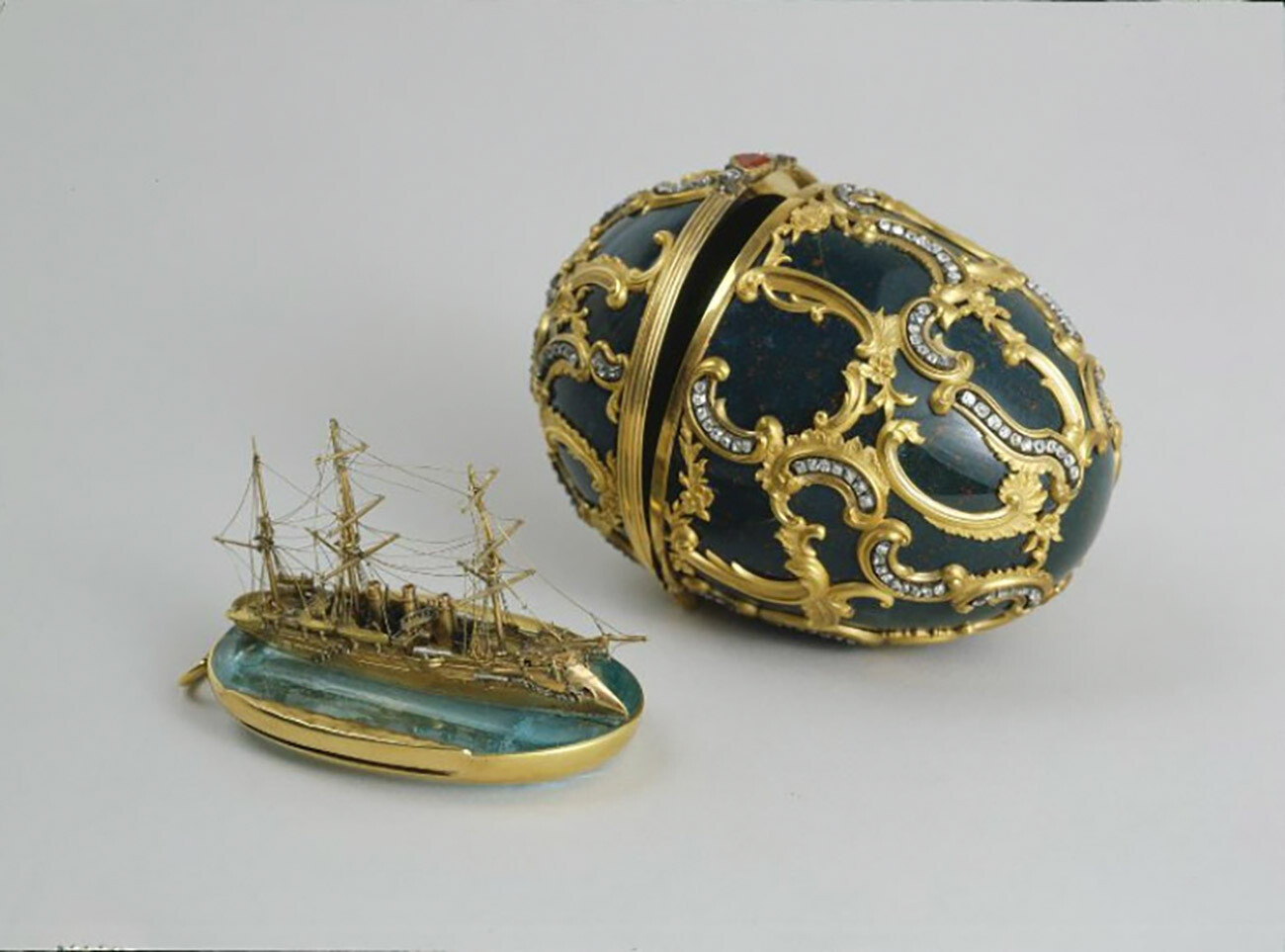 The egg, in neo-Rococo style, was made in the workshop of jeweler Mikhail Perkhin and was commissioned by Alexander III. This Easter gift commemorated a nine-month voyage to the East by the Tsar's sons (including the heir to the throne, the future Emperor Nicholas II). The surprise inside the egg is a miniature replica of the Pamiat Azova [Memory of Azov] armored cruiser on which the Tsareviches made their journey. The ship is made with gold and platinum, and set on a plate of aquamarine the color of sea water, in a gold frame with a loop for handling. The egg is made of dark green heliotrope, recalling the ocean depths. 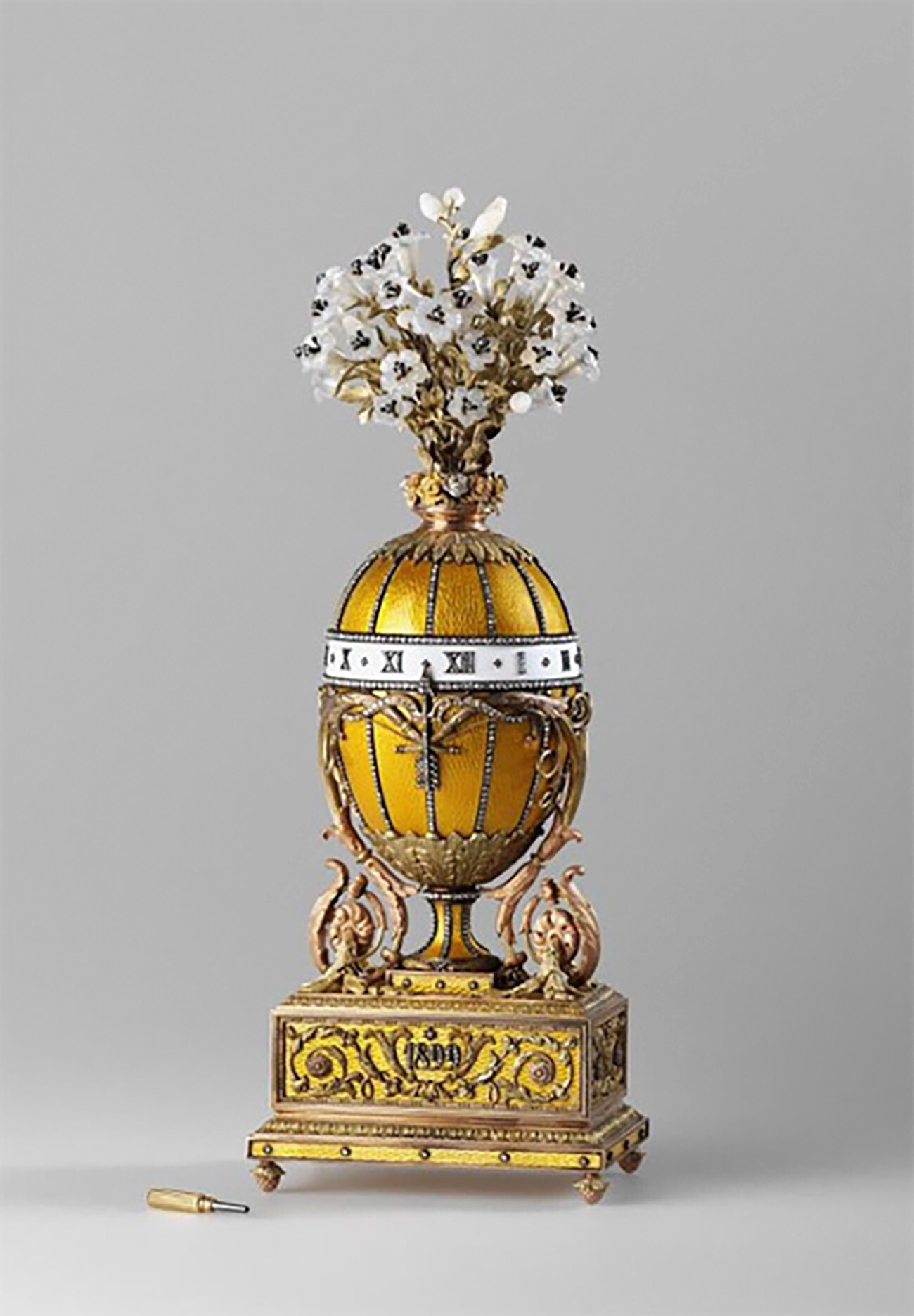 This gold egg is one of 20 presented by Nicholas II to his wife, Empress Alexandra Feodorovna, and is a true declaration of love. In addition to the lilies (a symbol of purity and innocence), the egg is also surmounted with a wreath of gold roses (a symbol of love). A white enamel dial with diamond numerals revolved horizontally, and a diamond-studded gold clock hand shaped like Cupid's arrow showed the time. 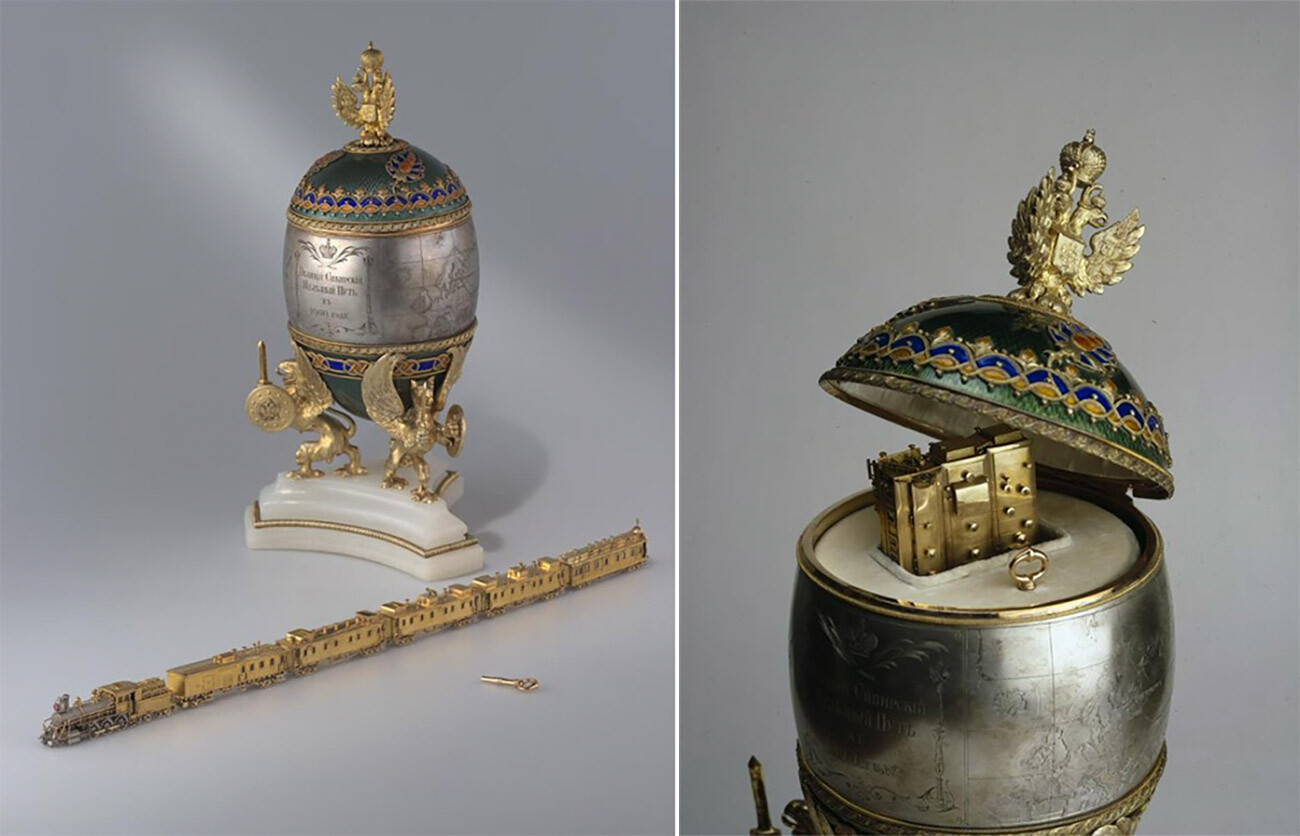 One of the few eggs never to have left Russia, it commemorates a momentous event for the country - the completion of the main section of the Trans-Siberian Railway. The Easter gift is also a reminder that the future Emperor Nicholas II had visited the construction site during his journey to the East. 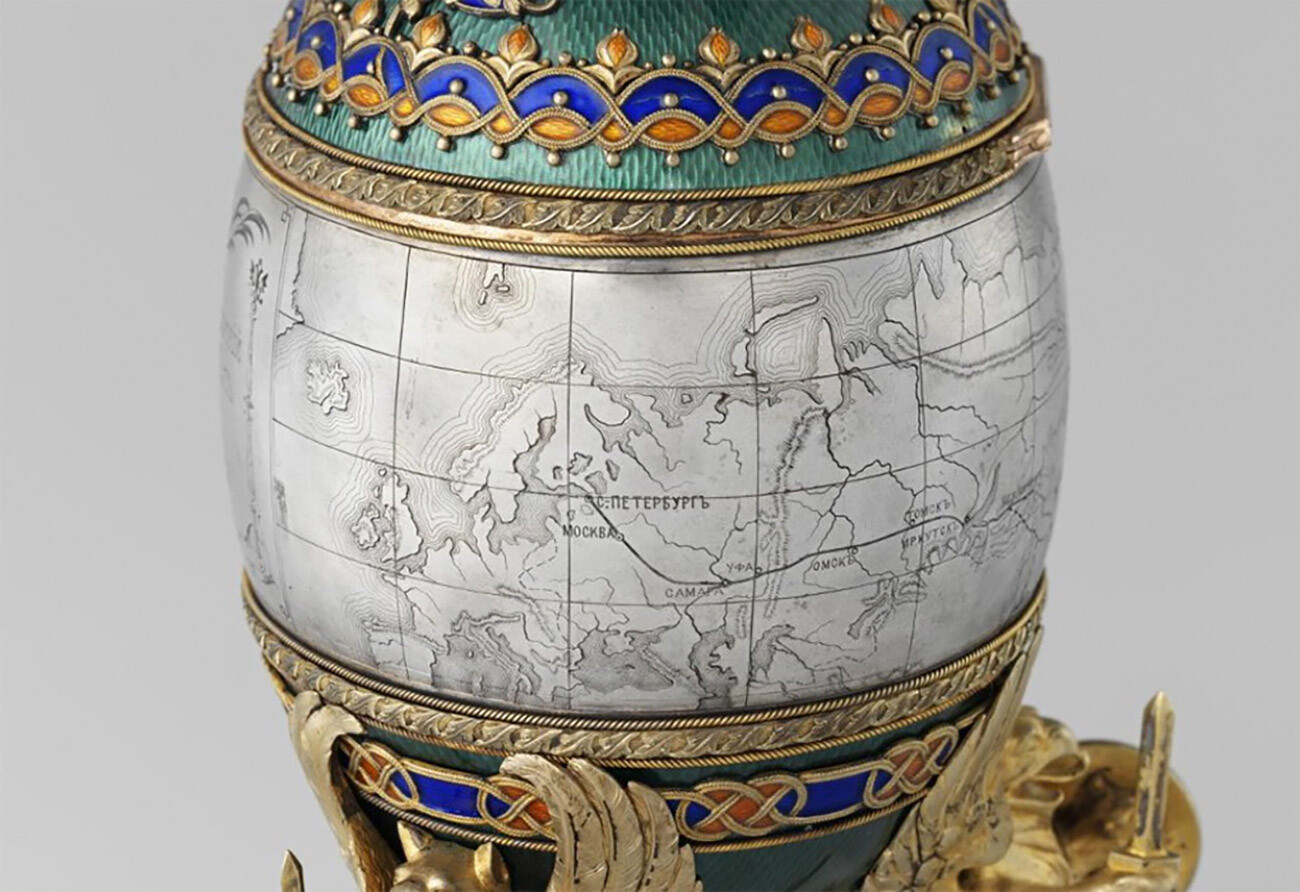 The egg shell has an interior lined with velvet, while its exterior is decorated with enamel and a wide silver belt on which a route map of the Trans-Siberian Railway is engraved (unfinished sections are marked by a dotted line). Inside the egg is a fold-away steam locomotive with a ruby lamp, diamond headlights and five carriages with windows made of rock crystal. A special mechanism set them in motion. 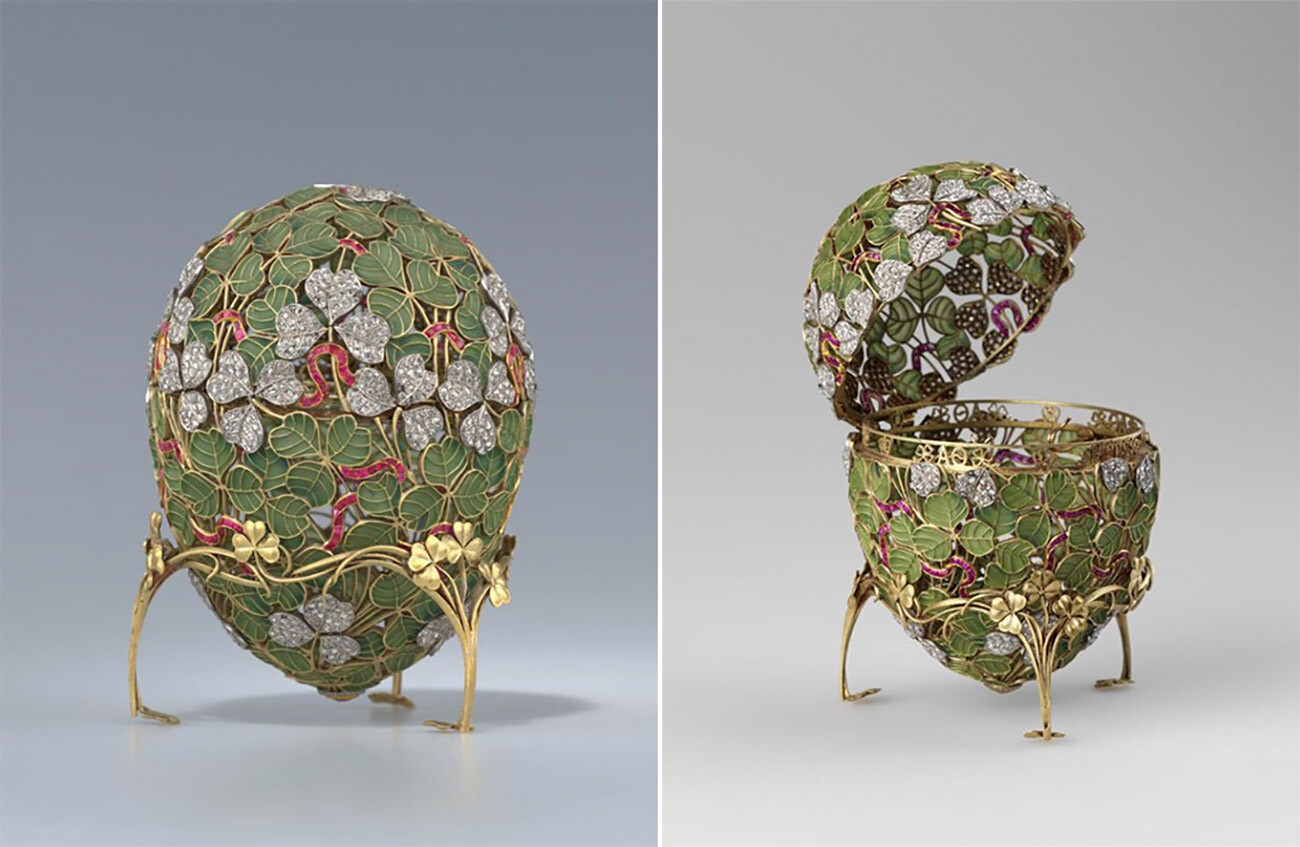 This egg is made in the Art Nouveau style fashionable at the time. Its surface is decorated with an exquisitely thin and delicate pattern imitating clover: Some leaves are covered in green enamel and the others in diamonds. A ruby ribbon curls through the openwork design, and the whole structure is supported on a pedestal of gold clover stems. If you open the egg, on the rim you can see a miniature crown of the Russian Empire and the year 1902. The surprise itself has been lost - it was a four-leaf clover adorned with diamonds, and miniature portraits of the Tsar's four daughters. 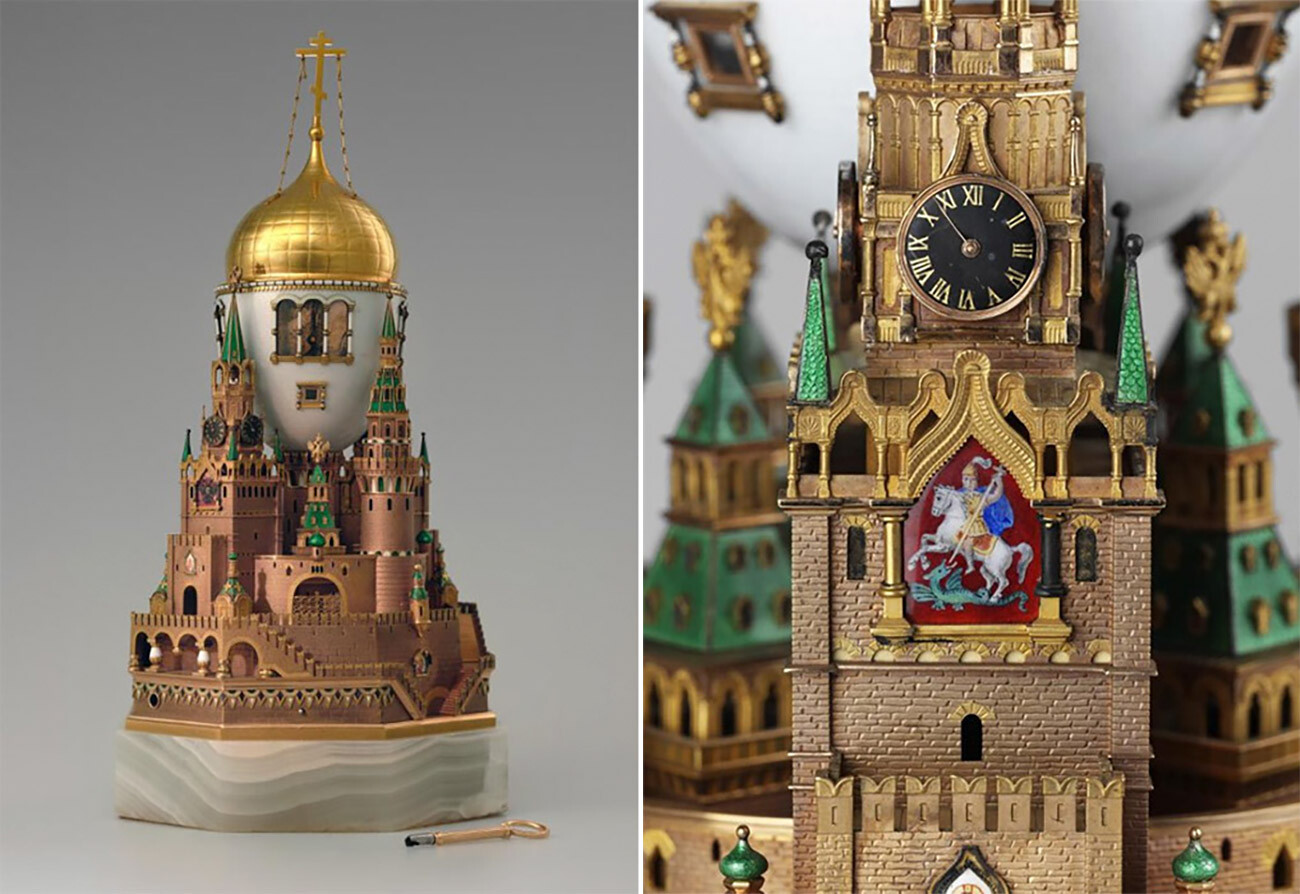 The largest of the Imperial eggs commemorates the visit of the Royal couple to Moscow for Easter in 1903. Nicholas and Aexandra didn't like to visit the old capital following the mass crush on Khodynka Field during the festivities after their coronation, so their two-week return to Moscow was a historic event. The egg itself resembles the main Dormition Cathedral of the Moscow Kremlin and is crowned with a gold cupola. The jeweled masterpiece stands on a base that imitates the outlines of the Kremlin. The court jewelers paid attention to the smallest details and reproduced in gold and enamel the coat of arms on the Spasskaya Tower, as well as icons and items of the cathedral's interior. The egg also has a wind-up clock and musical mechanism that plays the "Cherubic Hymn", a favorite hymn of Nicholas II. 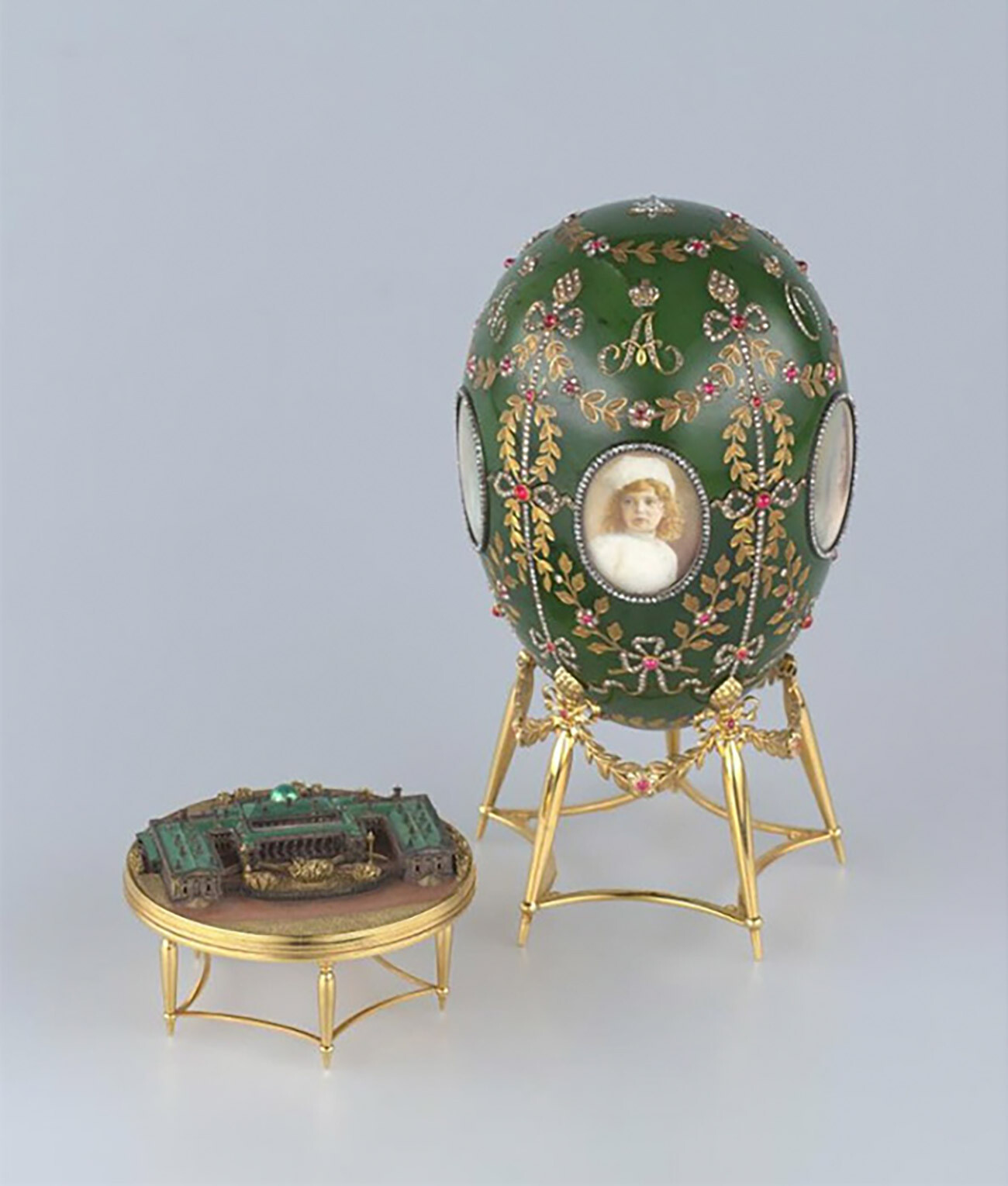 In 1904, a long-awaited son and heir was born into the Imperial family - the Tsarevich Alexei. He was afflicted with hemophilia, however, and the Empress began to experience increasingly frequent anxiety attacks - so the royal couple decided to retreat from the prying eyes of fashionable society and went to live in the Alexander Palace outside the town in Tsarskoye Selo. The palace provides the theme of this egg by jeweler Henrik Wigström - a miniature replica of it is the surprise inside.

The dark green nephrite egg is encrusted with gold and studded with diamonds and rubies. It is adorned with five watercolor portraits of the children of Nicholas and Alexandra: Tatiana, Olga, Maria, Anastasia and Alexei. 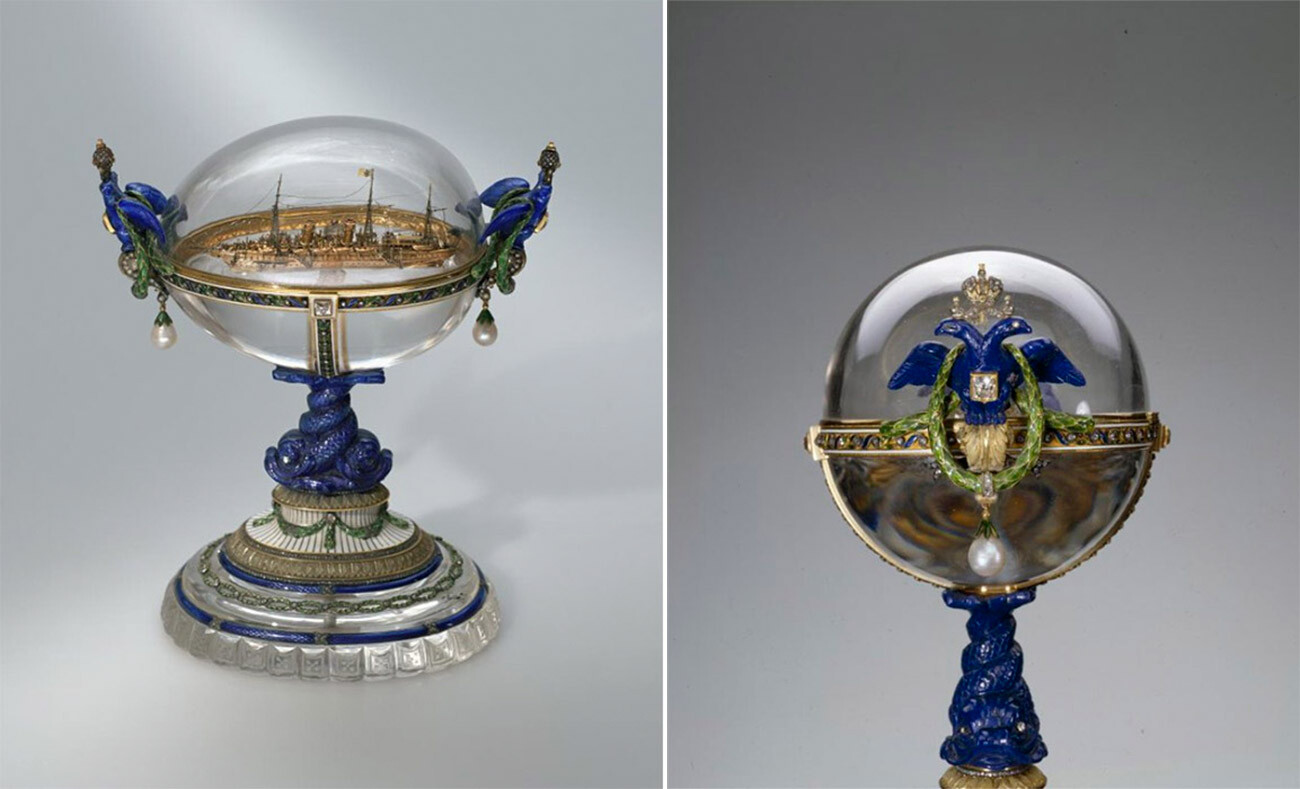 In 1909, Nicholas II presented Alexandra with an Easter egg containing a miniature replica of the Imperial yacht Standart, his favorite ship on which he frequently put to sea with his family. 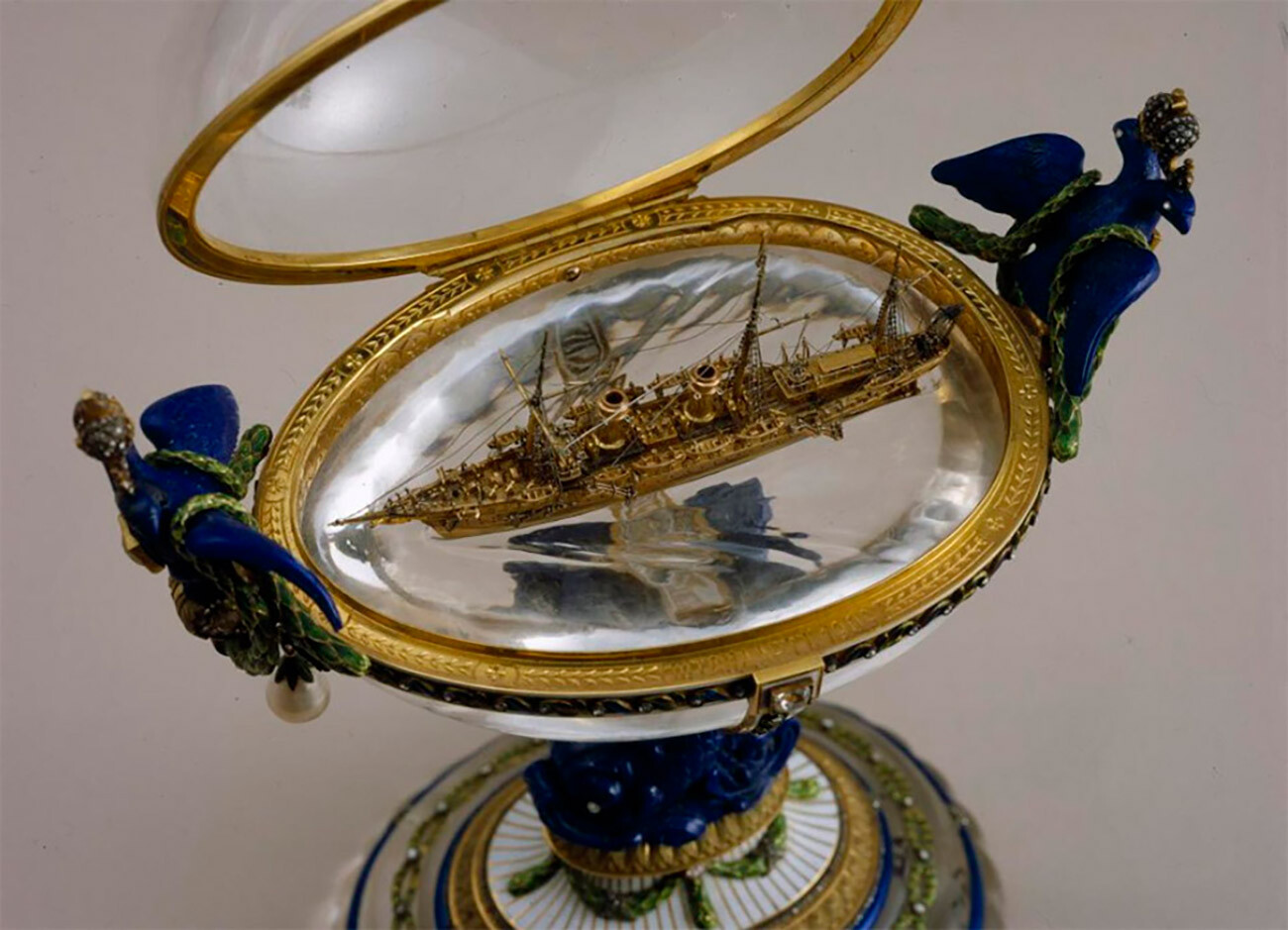 The egg is made of rock crystal and blue lapis lazuli. Inside, the gold miniature model of the yacht seems to be slicing through the crystal waves. 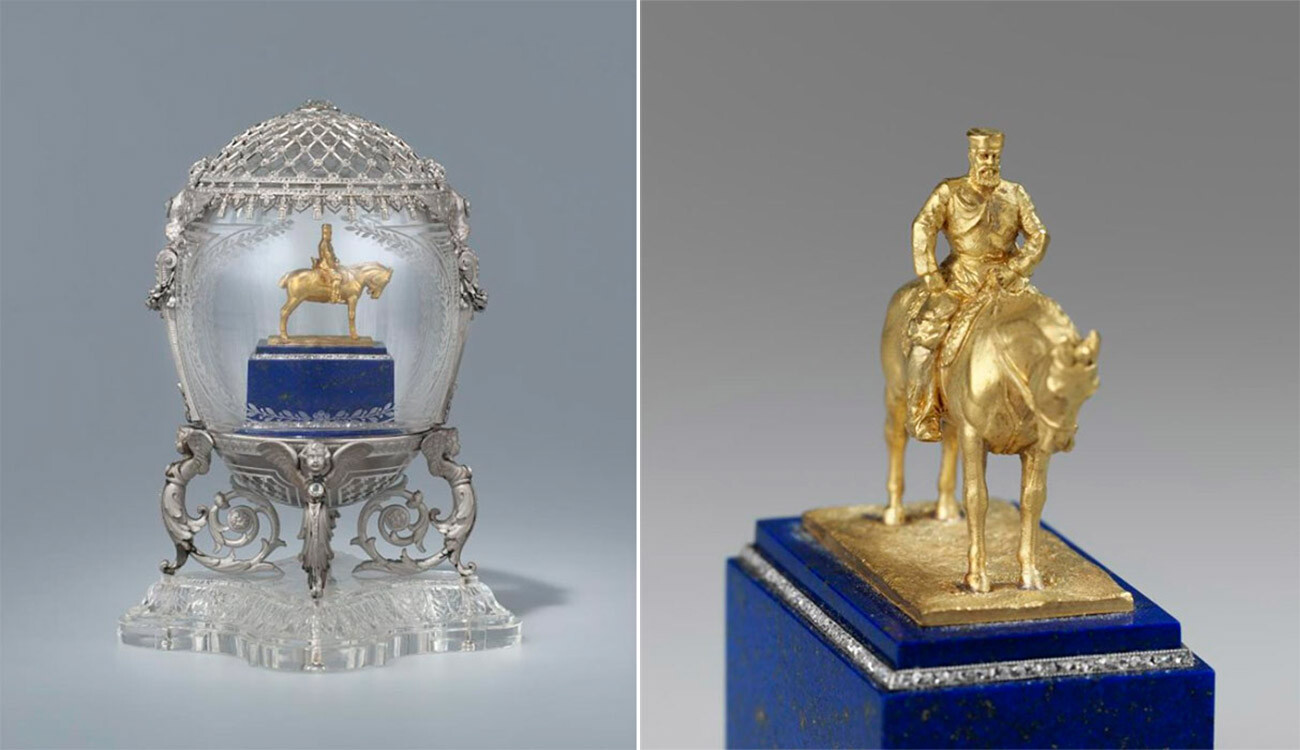 Nicholas presented this Easter egg with a model of a monument commemorating his father, Alexander III, to his mother, Dowager Empress Maria Feodorovna, in 1910. The miniature was inspired by a real monument to the "Peacemaker" Tsar which had been erected in St Petersburg in 1909. The gold monument stands on a lapis lazuli base. The surrounding egg is carved out of rock crystal, mounted entirely with platinum and decorated with double-headed eagles and diamond-encrusted trelliswork. 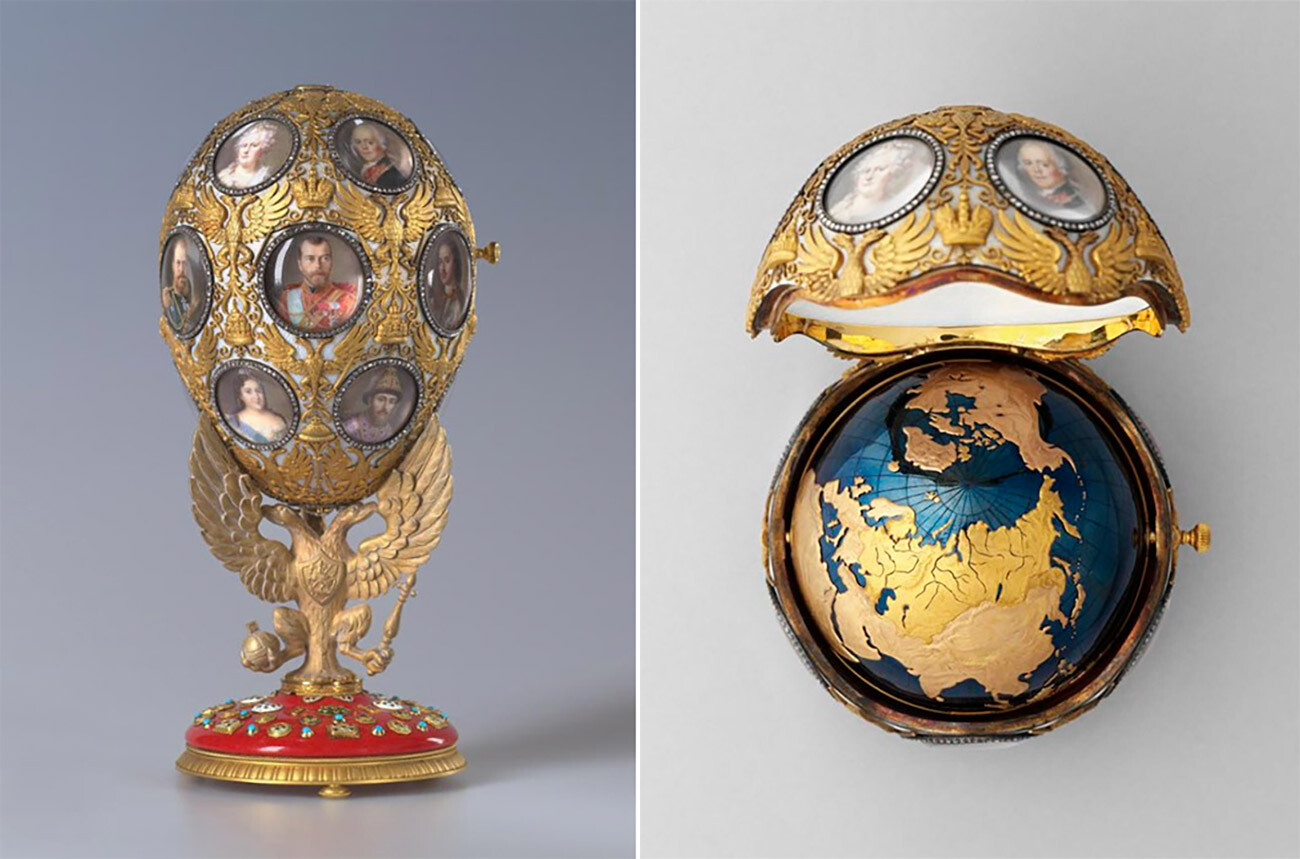 Carl Fabergé made this valuable egg to coincide with an important date: The 300th anniversary of Romanov rule was being marked on a grand scale in Russia in 1913. The work is replete with state emblems - the egg's purpurine base with enamel decorations resembles one of the ancient items of Tsarist regalia, the Russian Imperial shield of state. A double-headed eagle of silver-gilt serves as the pedestal for the egg. In its talons the eagle holds other important regalia - the orb and scepter. The gold shell of the egg itself is decorated with enamel and 18 portraits of the Romanov dynasty's rulers - from the first tsar of the House of Romanov, Michael, to Nicholas II. The surprise contained inside the egg - reinforcing its function as a manifesto - is a globe portraying the territory of the Russian Empire. 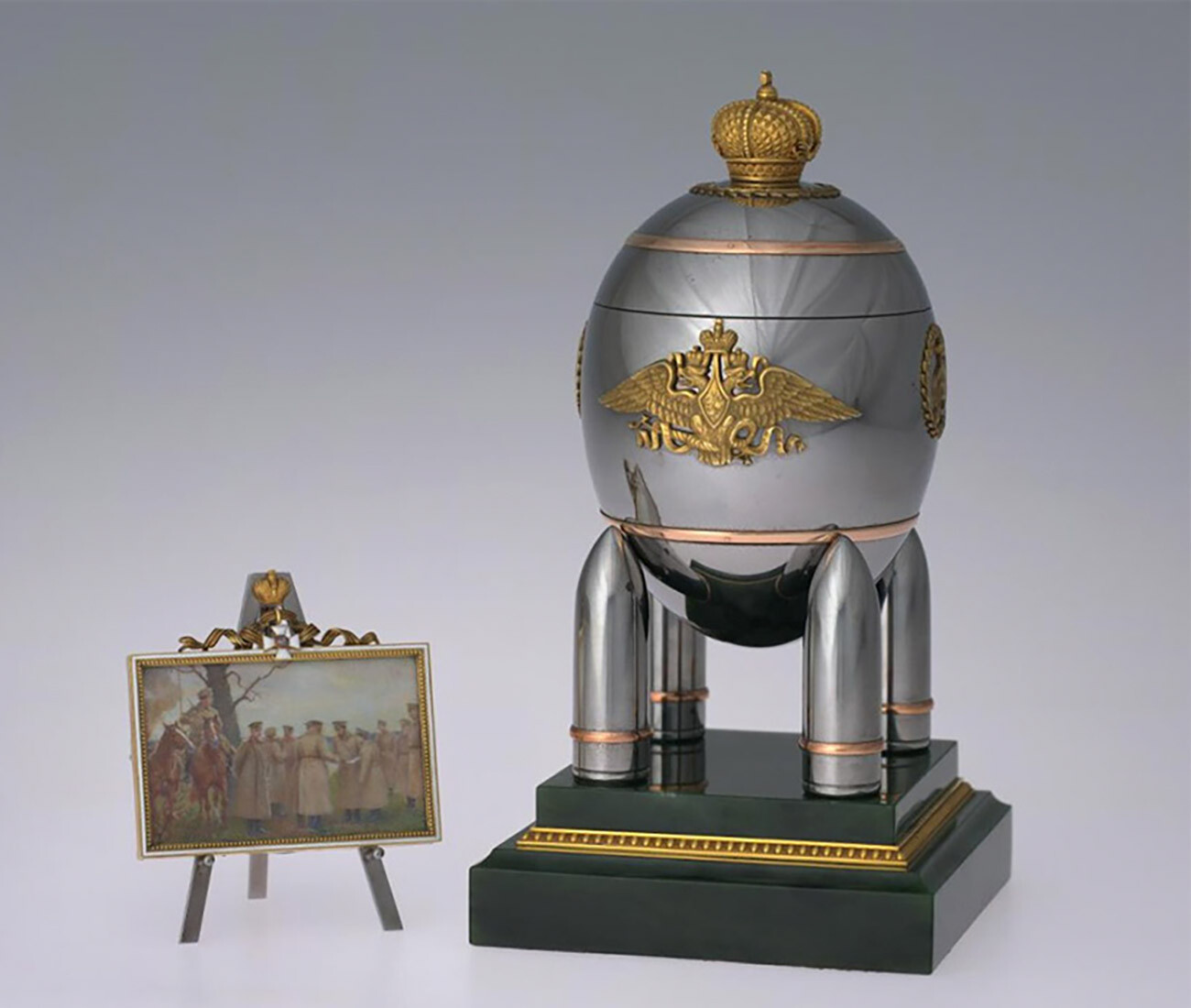 During World War I, no-one was in a mood for experimental trelliswork or the sparkle of diamonds, so the Fabergé jewelers created an unusual Easter egg made of steel. The composition is topped by the Imperial crown, and on the polished body is the Imperial coat of arms - a double-headed eagle with arrows and a laurel wreath in its talons - symbols of war and glory. The egg stands on steel feet recalling artillery shells, placed on a base of jade. 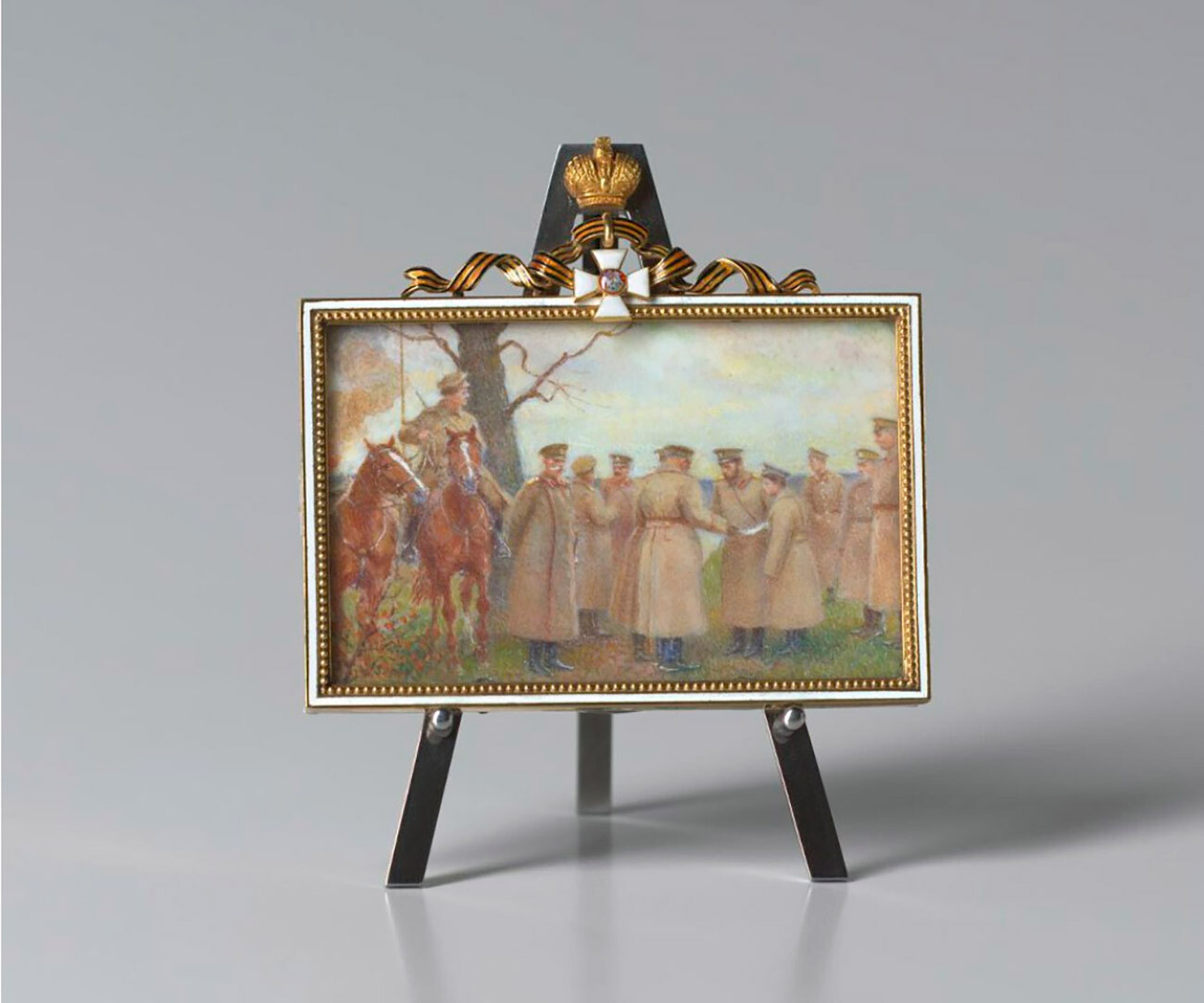 The surprise inside is in the form of an easel with a watercolor showing Nicholas II visiting the army at the battlefront. The image is inspired by actual photographs of the time.