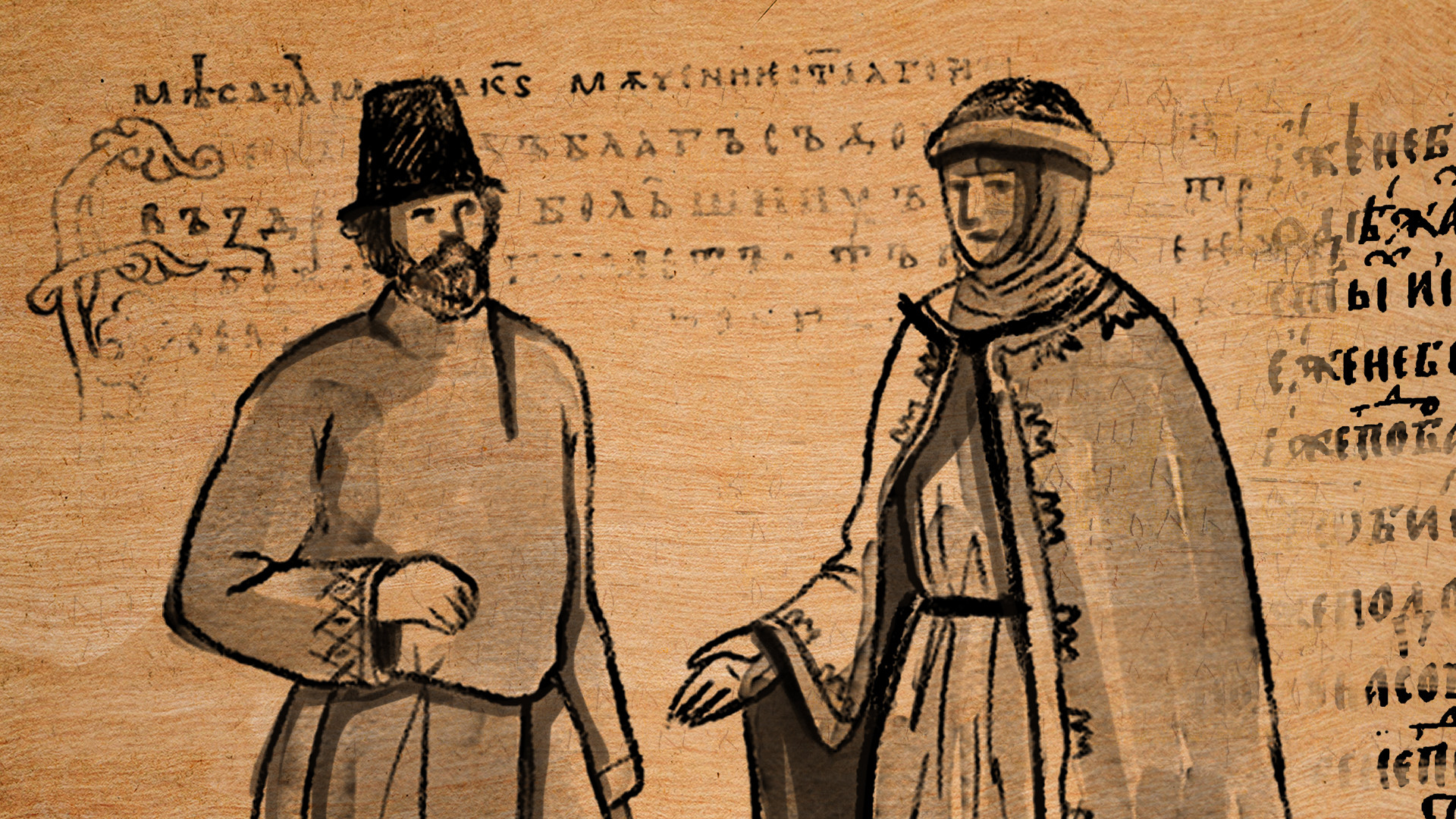 Irina Baranova
What did Russians traditionally used to wear? We took a closer look at the typical items that could be found in their wardrobes. 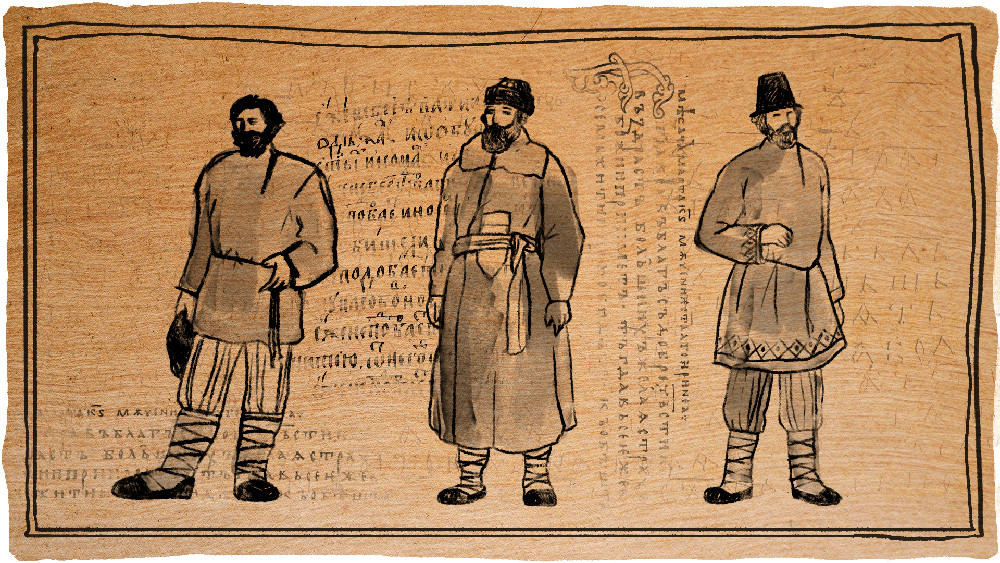 Men's attire was simple and consisted of a few basic items. These were common to both peasants and affluent nobles, although the latter often had their clothes made from more expensive materials, could use sophisticated designs and also had their clothing generously decorated with semi-precious stones and elaborate embroidery. 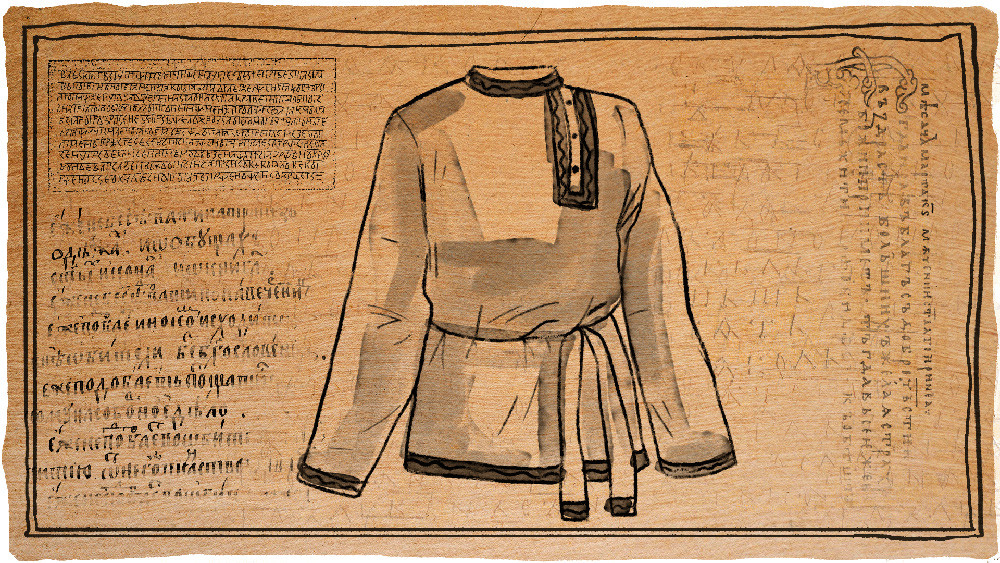 Rubakha, or sorochka, was the name for a man’s shirt. They were made of linen or cotton, could be collarless and, more often than not, had a "skewed collar" (i.e. opening to one side) - this type of shirt was called a kosovorotka. The collar and trim of the shirt were often embroidered with beautiful patterns. 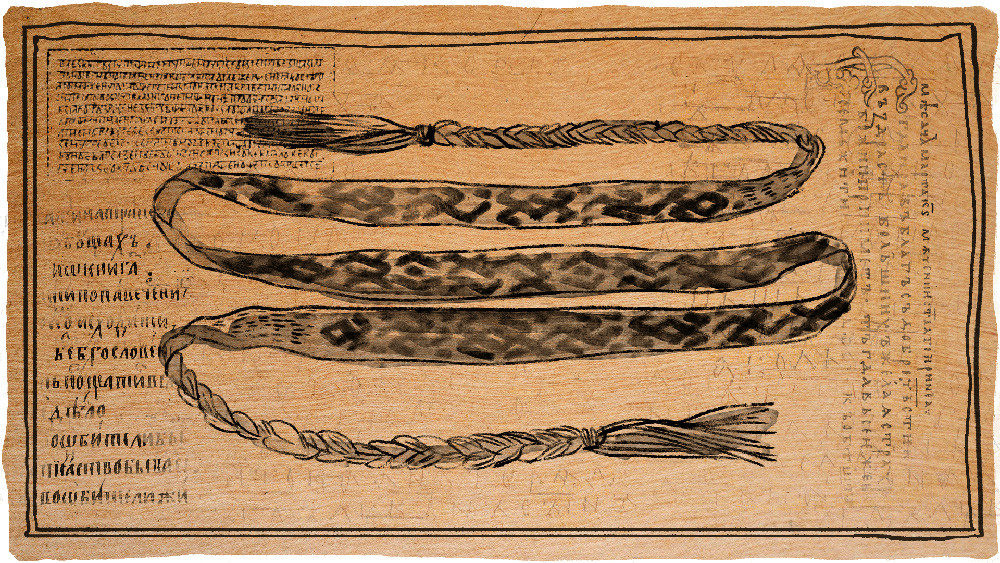 Usually, the rubakha was worn with a tie at the waist that might be made of silk or wool, and often had tassels at the ends. 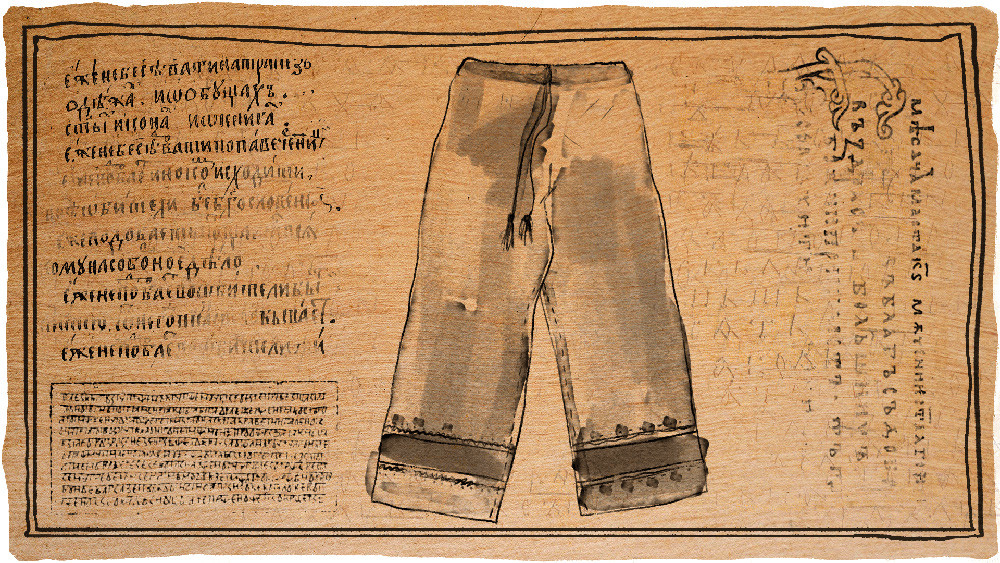 Shtany, or porty, as they were also known, were trousers with a loose cut tucked into the onuchi. 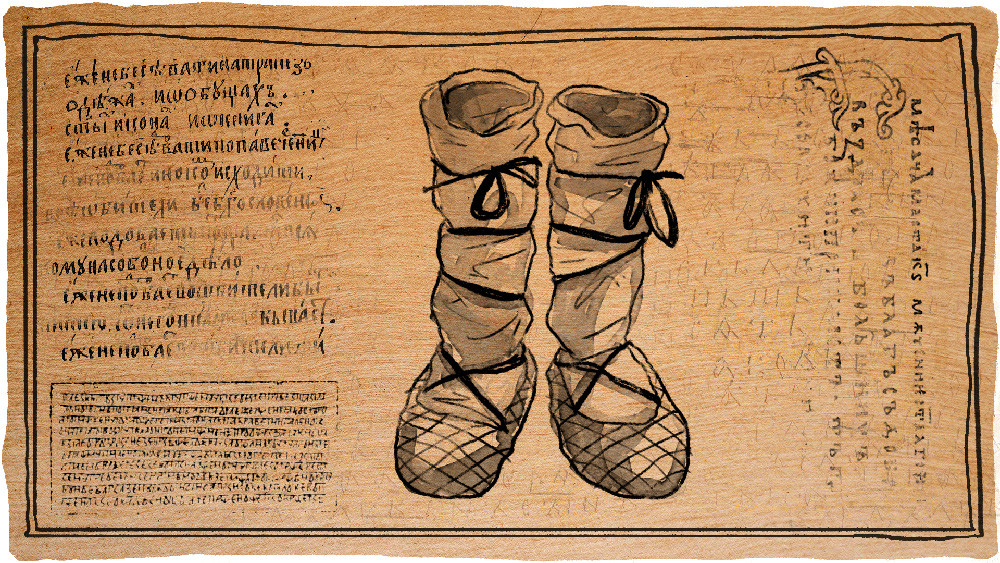 Onuchi - these were strips of thick cloth wrapped around the lower leg up to the knee and worn under footwear instead of socks. 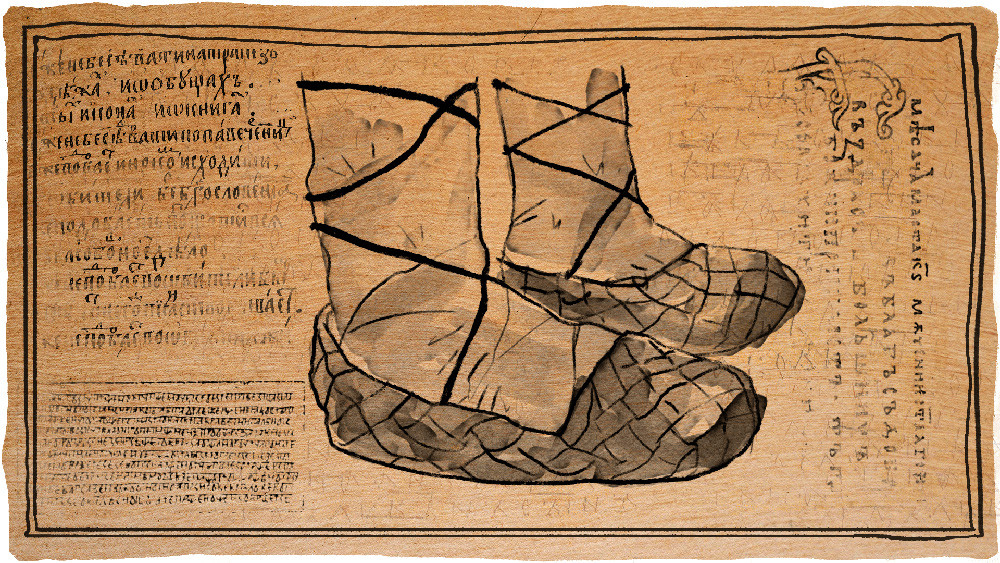 Lapti - this famous Russian footwear was woven from birch bark, and was tied around the foot with string, and worn over the onuchi. 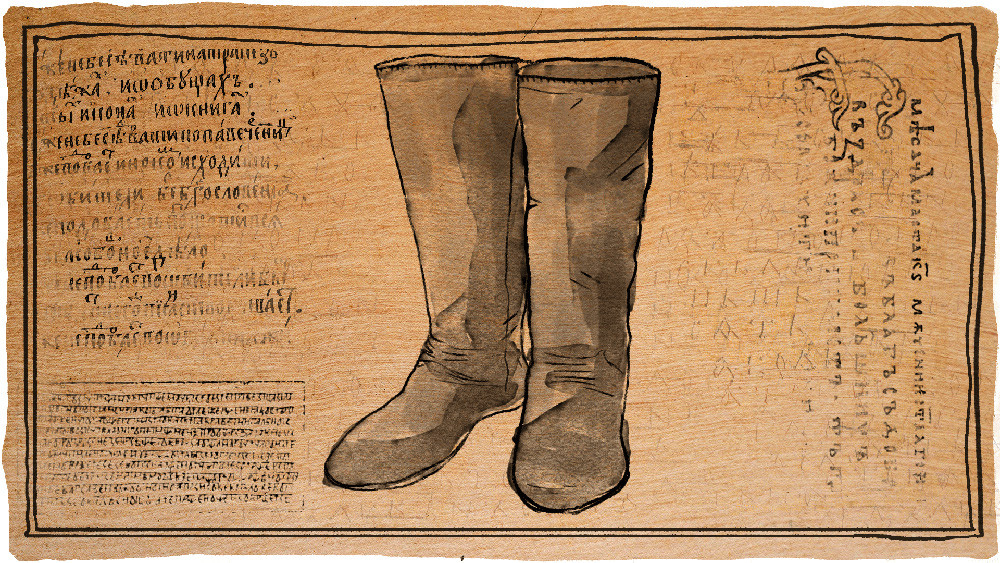 Boots - these could be either tall or hardly reach above the ankle, and they were usually made of leather. 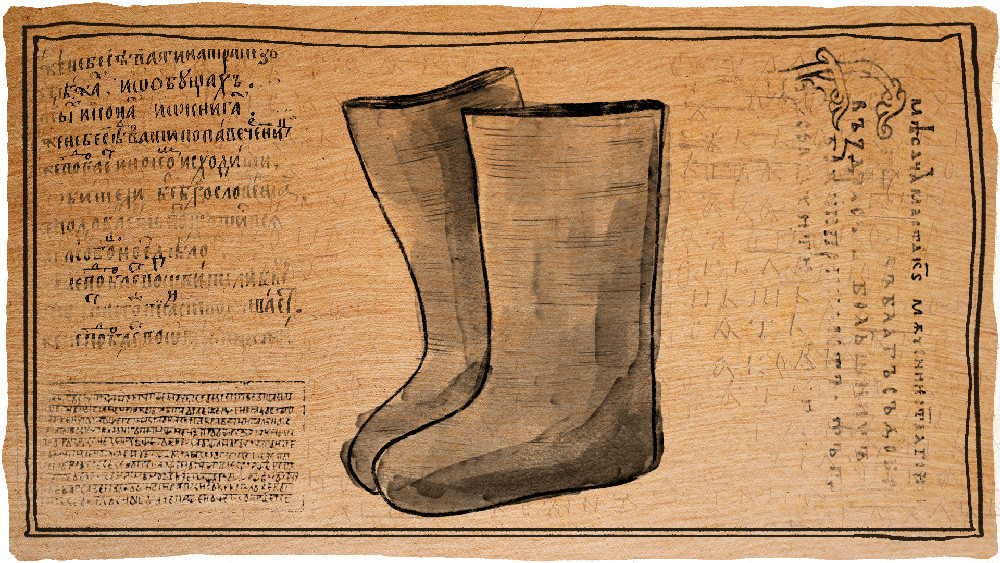 Valenki - were (and still are) winter boots made of sheep’s wool felt. 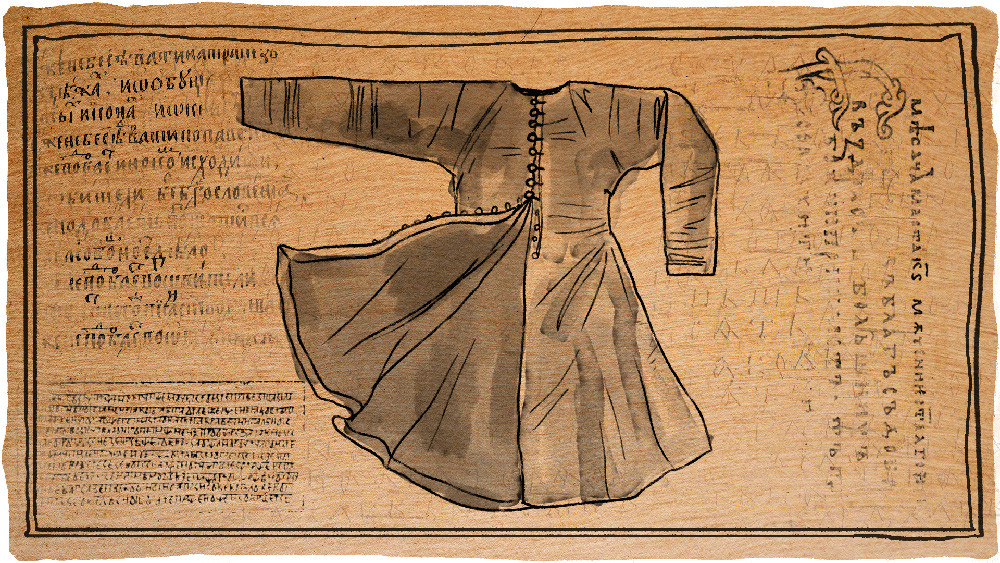 Kaftan - this piece of outer clothing for the cold season came in different lengths and was made from different fabrics. Kaftans for the warm season, with no collars and made of coarse cloth, were called zipuns. Winter kaftans made of fur-lined sheepskin were called kozhukhs. 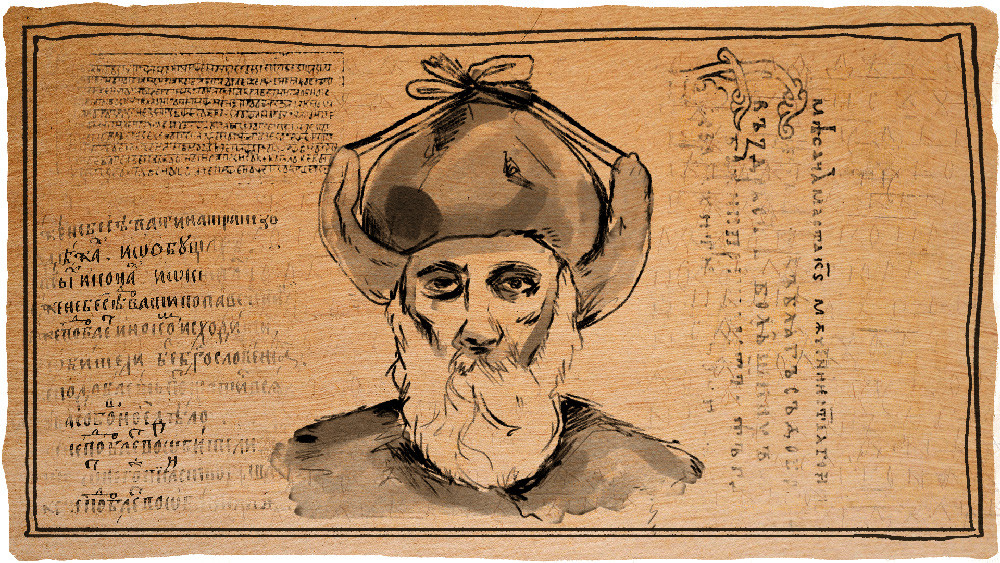 Headwear - in winter men wore a treukh [literally "three ears"], which had three flaps to protect the back of the head and ears, and was somewhat similar to the ushanka winter fur cap with ear flaps that only appeared in the 20th century. During the warm season men wore a small round cap called a tafya, similar to a skullcap or the traditional Central Asian tubeteika. 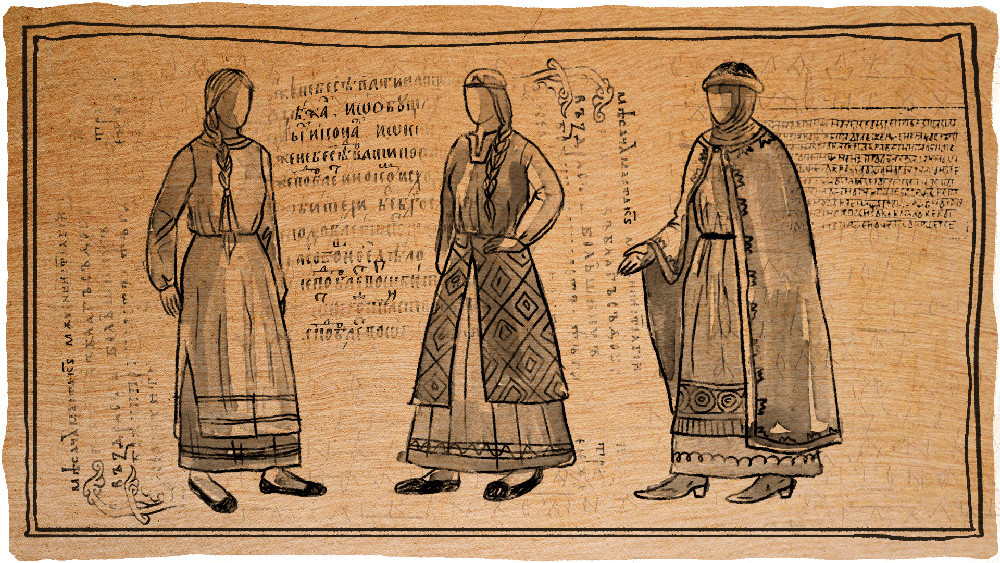 Women's clothing was somewhat more sophisticated than men's. Women from wealthy families had their clothes made of more expensive fabrics and richly decorated. In addition, noble women had more layers of clothing, and their outfits could weigh up to 20 kg. Married women also dressed differently from unmarried women. 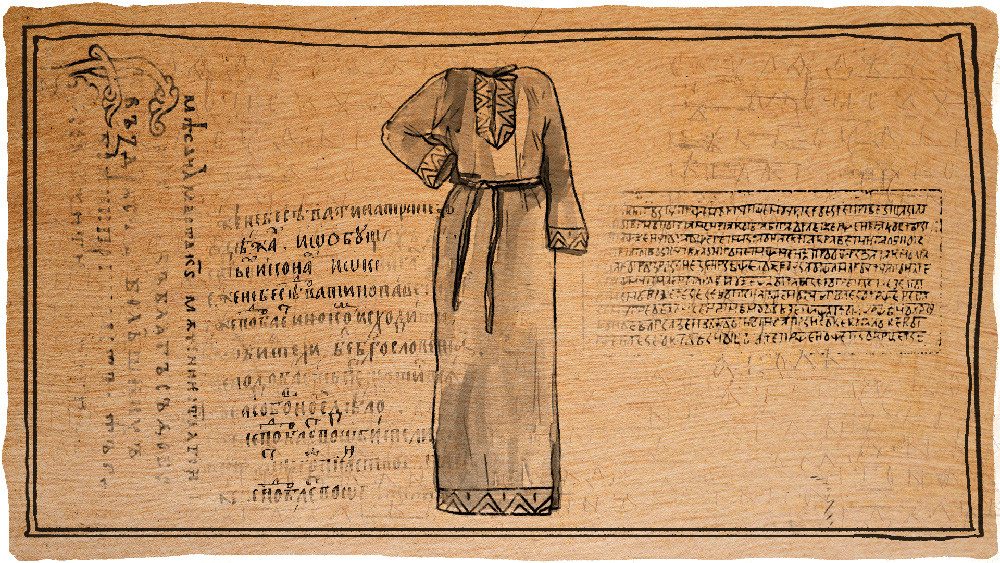 Rubakha - when worn by women, this shirt essentially served as underwear. For commoners, it was made of cotton or linen, while wealthy ladies had them made of silk. Women's shirts were always floor-length. Young girls had them richly embroidered. Even if the designs were hidden underneath, it was believed that they afforded protection against the evil eye. 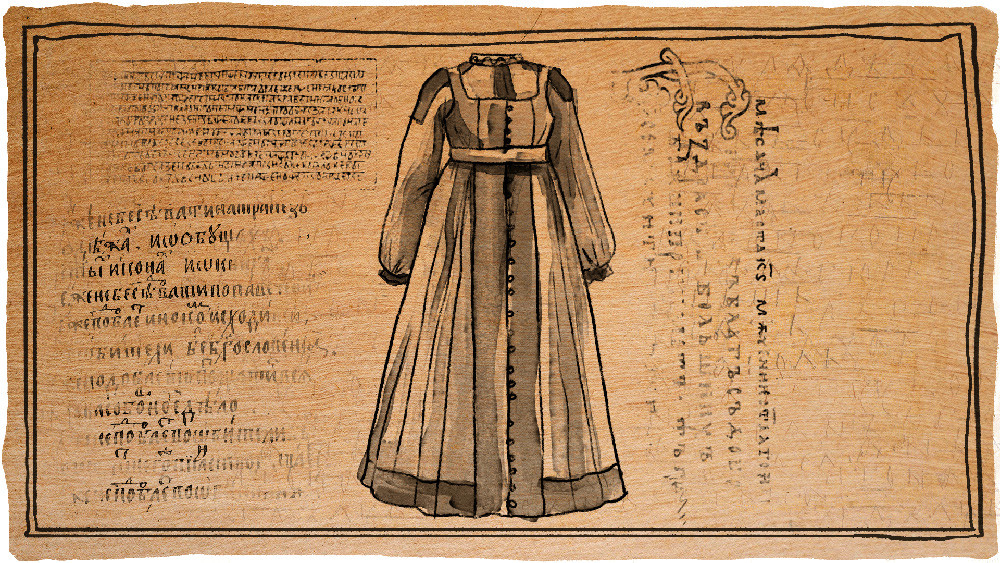 Sarafan - was a long sleeveless dress and was the basic element of the female costume. Both the rubakha shirt and the sarafan had to be belted. Women often wore necklaces or beads over their sarafans. 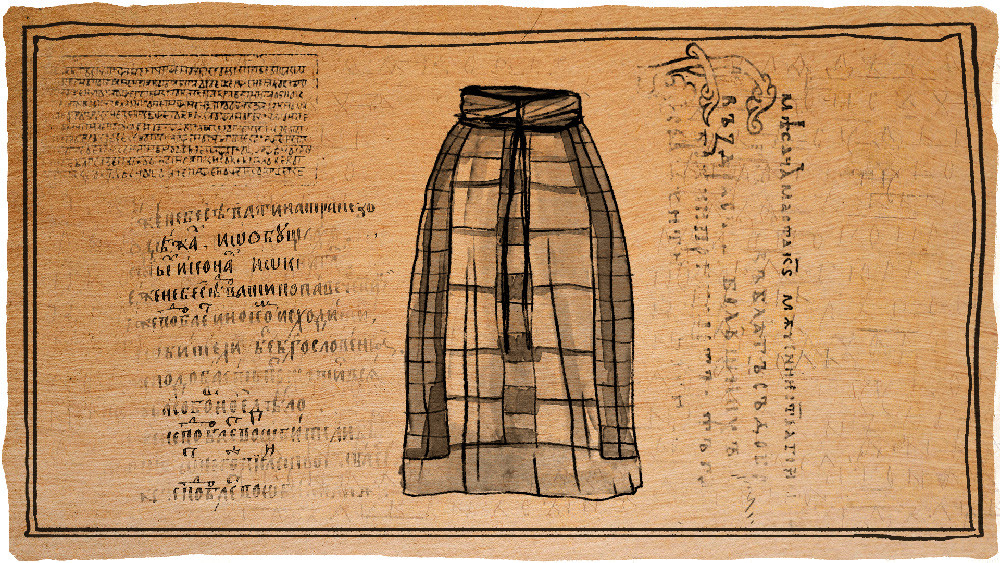 Ponyova - was a skirt usually worn instead of a sarafan in the southern regions. Only grown-up girls wore ponyova skirts, which was a distinctive sign of a girl’s eligibility for marriage. 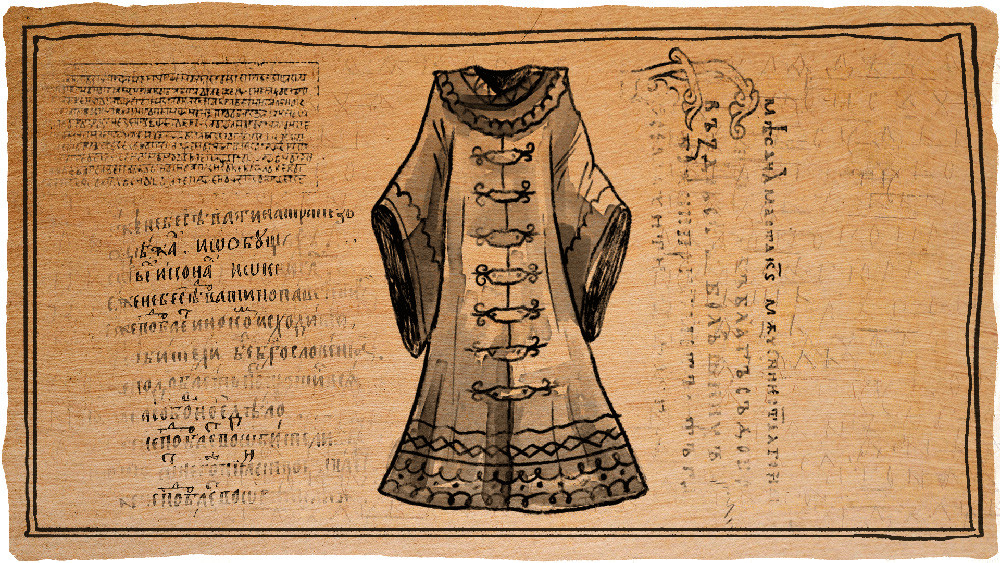 Outer garments - came in a great variety of women's outdoor wear, but was uniformly long and buttoned from the collar to the ground. For instance, the letnik had wide sleeves and didn't cover the feet. There was also the opashen, with a long row of buttons and split sleeves. Women could wear fur collars over these long garments. 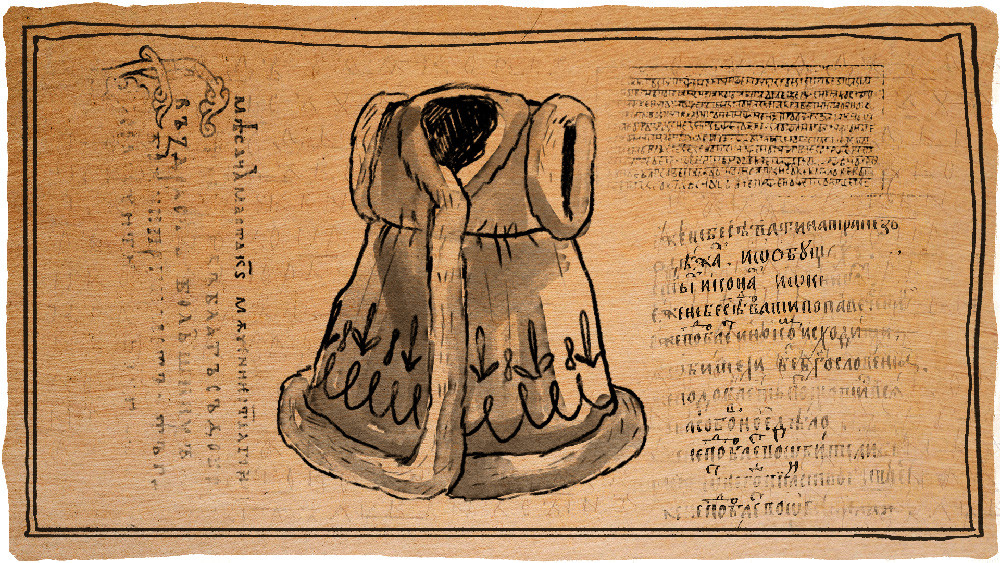 Dushegreya - was a short special-occasion jacket worn over outer garments. There was a great variety of designs and fabrics. 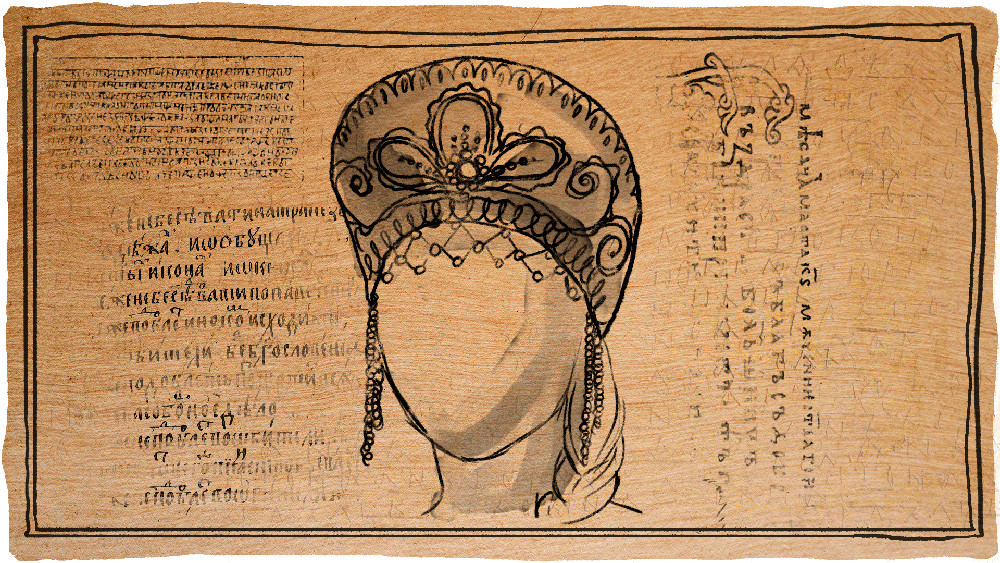 Headgear - came in many types because social decorum dictated that married women always covered their heads and hid their hair. At home they wore a soft cloth cap called a povoynik, or just a kerchief. When going out they’d put on a kokoshnik - a headdress stiffened above the forehead. Almost every region had its own kokoshnik design - crest-shaped or cylindrical. A headdress could have beads attached. In winter, women wore fur hats with headscarves on top. 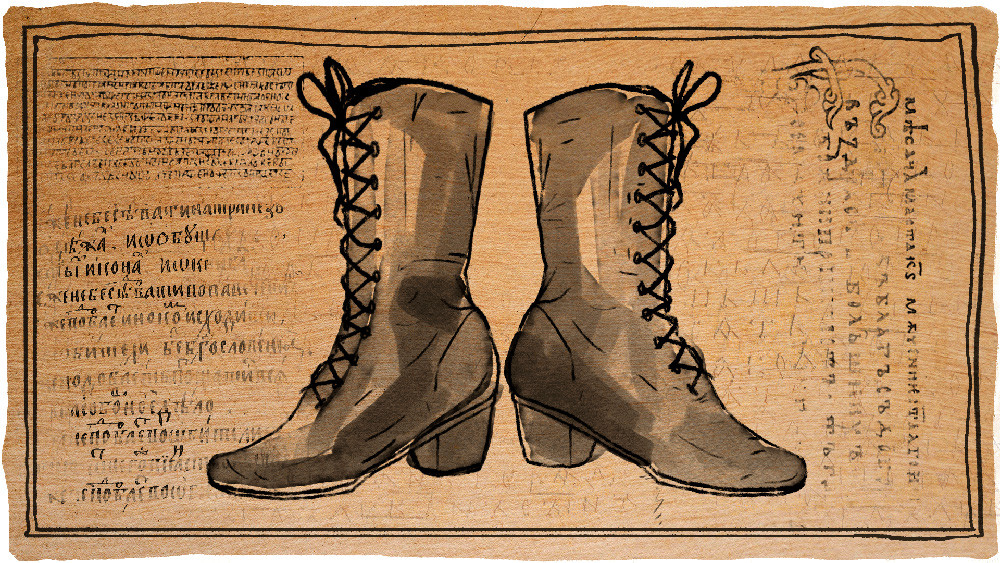 Peasant women also wore lapti with onuchi and valenki, as well as boots and shoes, usually made of leather. Wealthier women had them made of brocade or velvet, and wore them richly decorated. Heels first appeared in the 16th century, including for men's footwear.